What I Learned at the Patek Philippe Watch Art Grand Exhibition 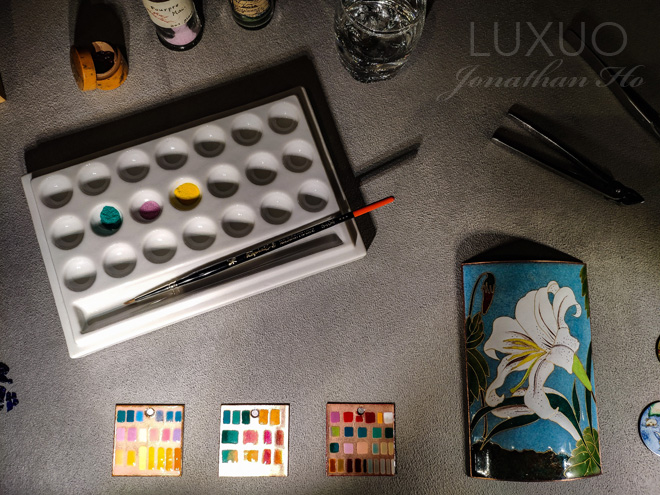 Spanning 1,800 square metres, this is Patek Philippe’s 5th and largest Grand Exhibition. With re-creations of the Napoleon Room complete with changing day and night Geneva scenes out of the “windows”, LUXUO and World of Watches had the privilege of having some intimate 1:1 time with enamelling legend, Ms. Anita Porchet (Part 1) and Philip Barat, Head of Watch Development at Patek Philippe (Part 2) to fully understand just what makes the Geneva manufacture’s watches the finest in the world. 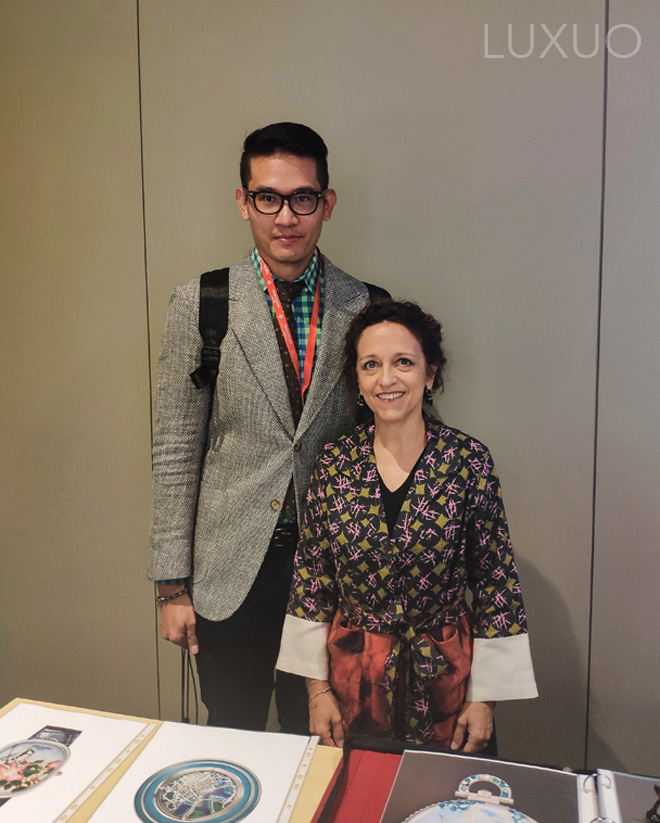 “The fire is the ultimate test. I try to find the solution for every problem but I am not always successful.” – Anita Porchet

Few know this, but enamelling is a literal rare handicraft. Indeed, it hasn’t been taught formally in Switzerland since the end of the Quartz Crisis. This means that Ms. Anita Porchet, one of Switzerland’s most recognised and respected enamelers, is probably among the last few to mentor apprentices and while others like Richemont, Swatch and Chopard have begun to invest in creating a kind of formalised system, it’s still too early to tell if the skills would continue to exist in perpetuity. 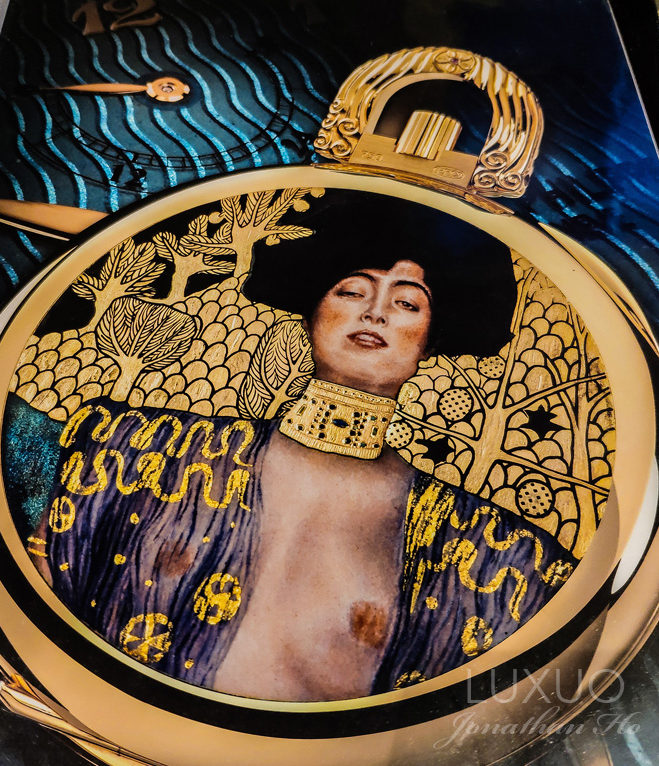 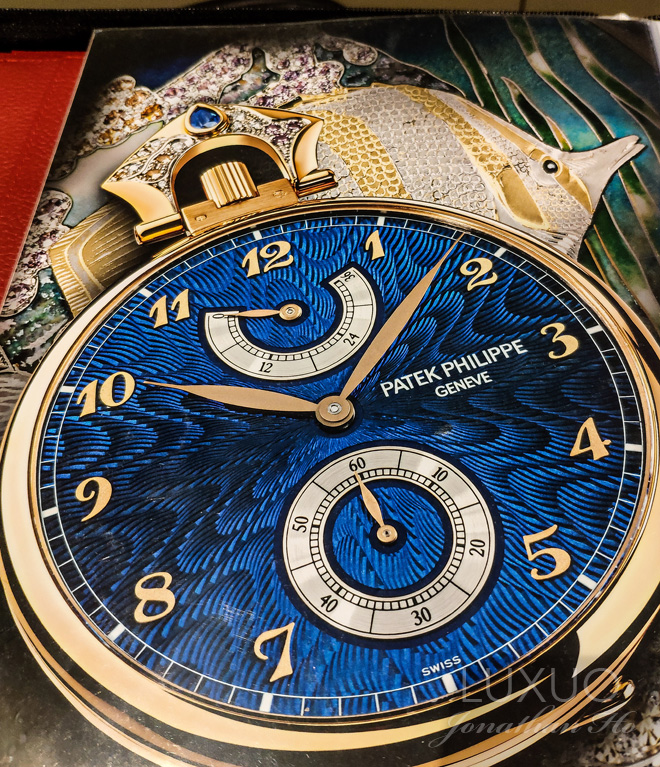 The very first watches enameled by Anita Porchet for Patek Philippe date back to the mid-1990s. Equipped with more than 30 years of experience, she has since created works of miniature art for every serious watch maison including Vacheron Constantin, Hermes, Piaget, Fabergé and many others.

Winner of the 2015 Gaïa award (think of it as the watch industry’s equivalent to the Nobel), one of the reasons artisans like Ms. Porchet are a rarity still is the sheer breadth and depth of knowledge required to become a true enameller. One needs to be aware of many branches of the art, including cloisonné, champlevé, grisaille, pailloné, Limoges, and miniature painting, this scope of skill and know how alone sets Porchet apart from the other masters who were with her in the Grand Exhibition’s Rare Handicrafts room. 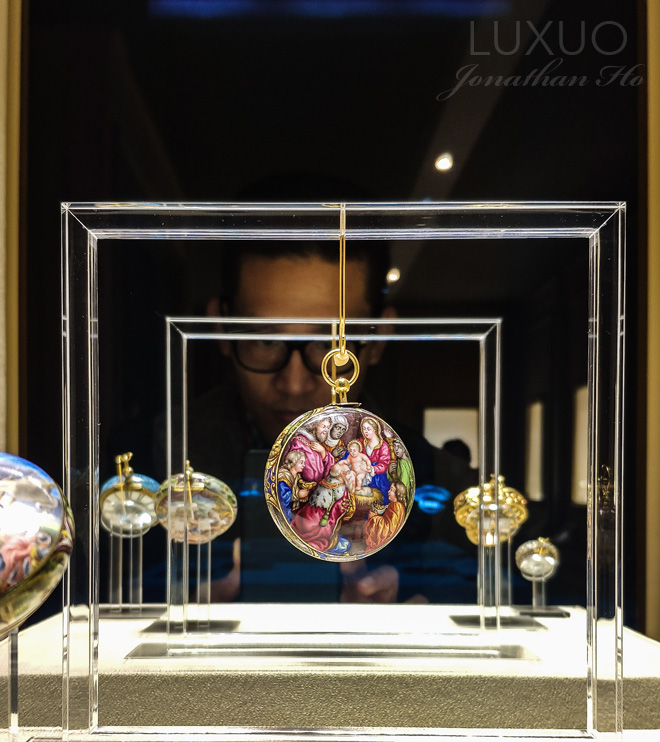 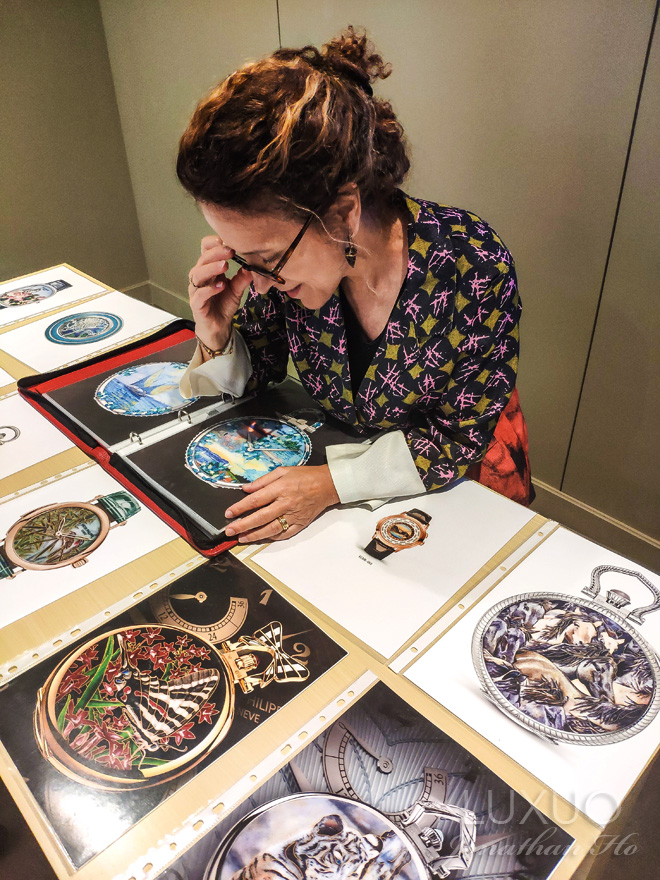 How long does it take to complete a dial?

Three months. Six to eight hours a day with breaks in between to rest my eyes. It can take up to a year to finish a seriously complicated dial.

From my experience, the actual colours before and after firing are very different. How are you sure what the colours will be after firing?

This is the difficult part. It involves a lot of trial and error. Some colours will be familiar due to long experience and repeated use. You will only discover issues with some other less used colours after instinct tells you something is wrong mid-way through the work. Colours like red, orange and pink are among the most difficult colours, so you can imagine the level of difficulty in re-creating orchids in enamel. Green and blue are the easiest because they are more stable colours. The other colours are more difficult to control. Once fired, the colours will remain so for eternity. 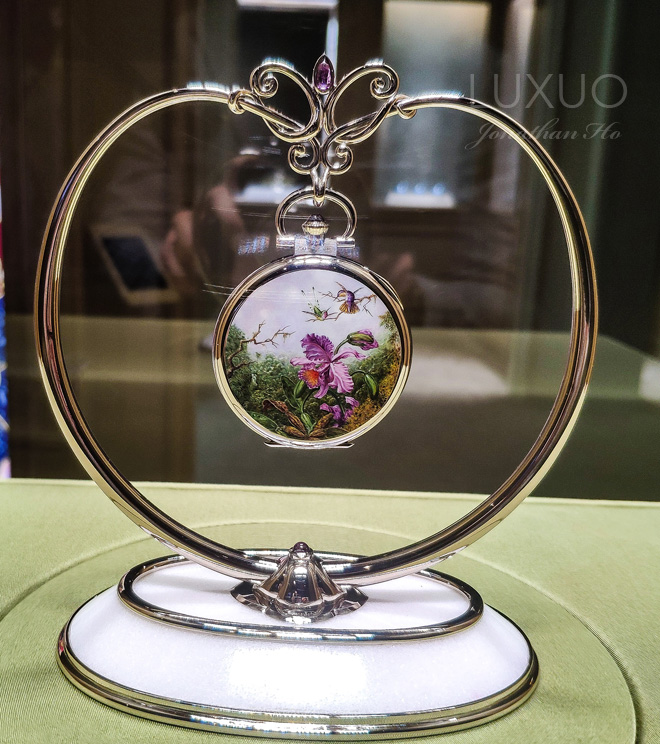 Red, pink and orange are the hardest, most temperamental colours to work with in enamelling 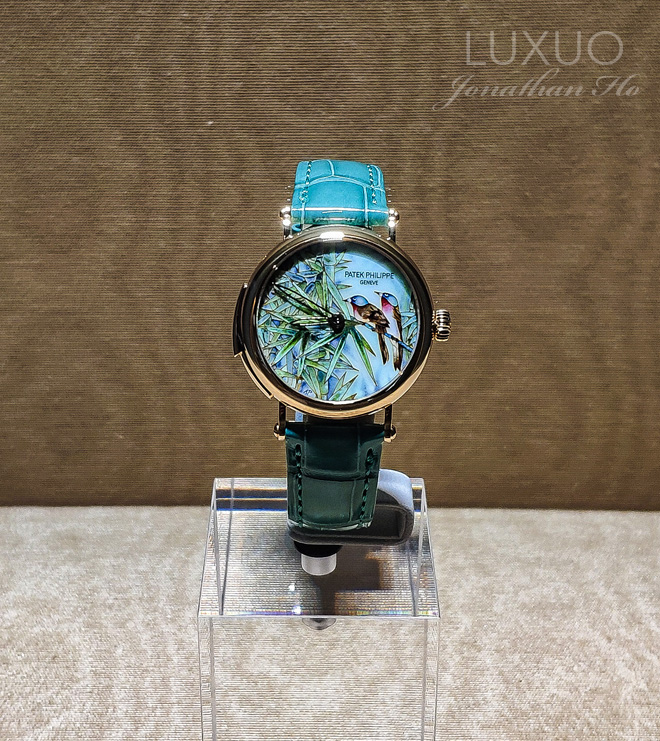 Blue and green are comparatively easier colours to work with

A few seconds too long in the kiln can ruin months of enamel work and it might not always be the enamel. Sometimes its undetectable impurities in the glass that cause bubbles or discolouration. Other times, it can be the metal of the dial itself. Rarer still, are the occasions when the colour and viscosity of the liquid itself is a factor. The fire is the ultimate test. I try to find the solution for every problem but I am not always successful. 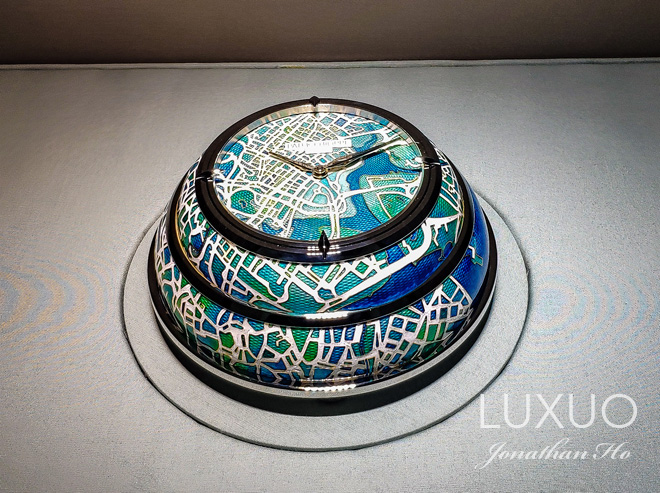 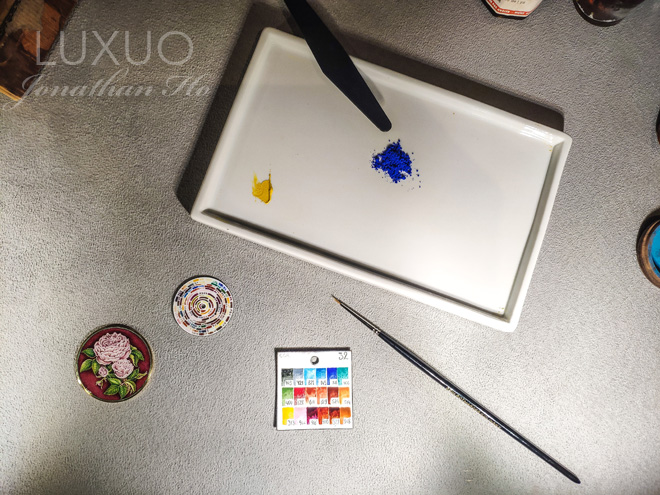 You won the Gaia Award in 2015. Why are you considered the best enameller in the industry?

I don’t think my techniques are very different from other artisans but I wouldn’t want to share them either. They wouldn’t be secret anymore. [laughs] 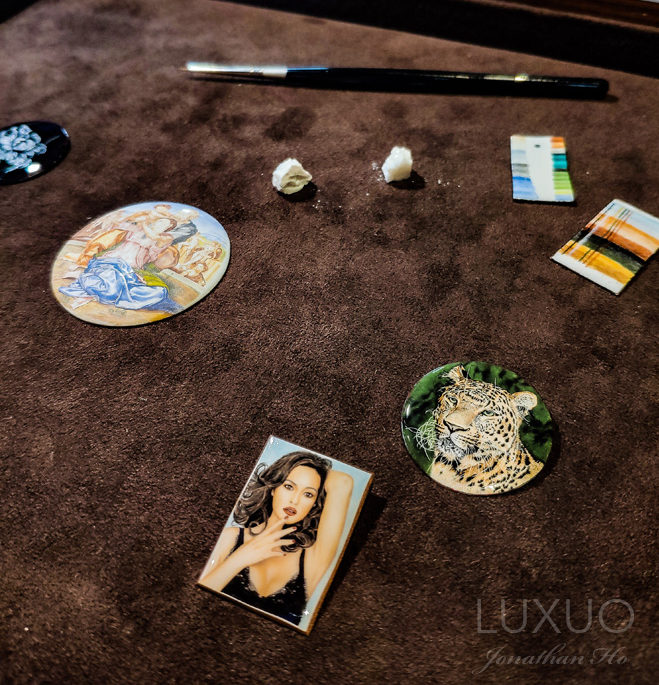 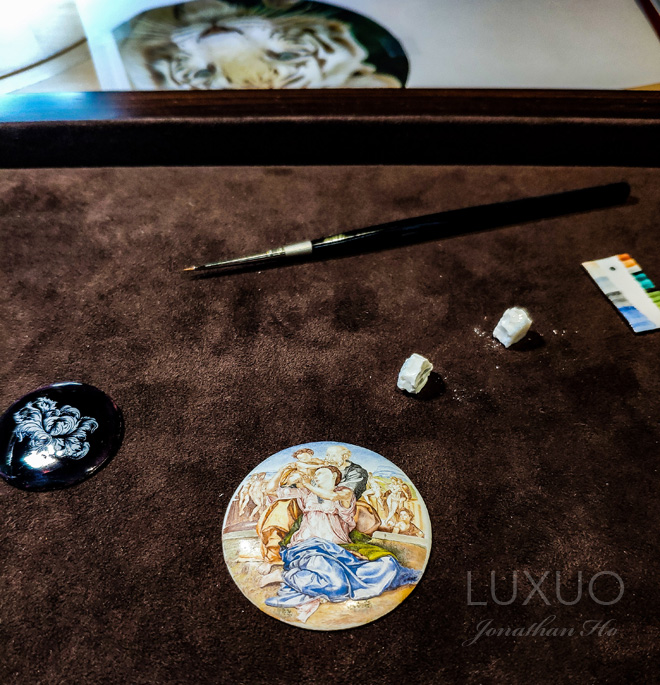 Did you always know you wanted to be an enameller?

I started at the age of 12. My Godfather was an enameller, he introduced me to the craft.

Where: Sands Theatre, Marina Bay Sands, 10 Bayfront Ave, Singapore 018956
Open: Monday to Sunday from 10am to 7pm
Admission is free