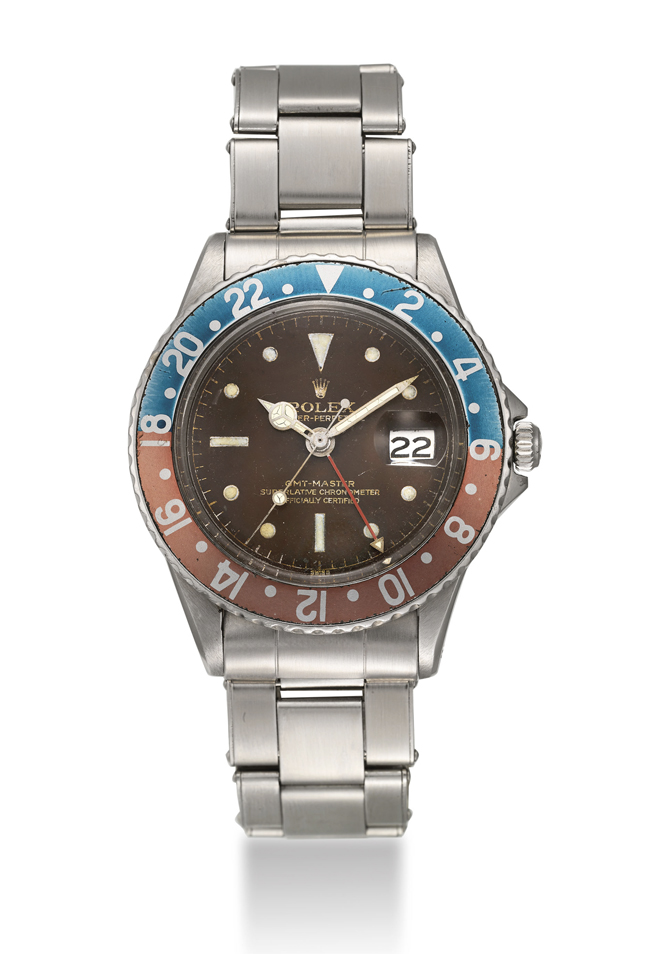 Ostensibly, watch collectors fall into two distinct camps – the kind who prefers their timepiece in pristine, out of box condition and another, the worn-in, lived to tell the tale camp who enjoys their watches with a provenance told in dings and scratches. Inevitably, the watch collecting zeitgeist of the moment is best encapsulated with Rolex: the thou shalt not take thy Submariner swimming group and the vintage Rolex aficionado: the more “tropical” or patinated the dial, the more yellowed the luminous material, the better.

As with the vagaries of most watch collecting trends, it is hard to determine when exactly vintage Rolex watches started to be appreciated for the well-used tool watches that they were meant to be. Christies hypothesises that the trend originated in Japan where the reverence for wabi-sabi aesthetic values imperfection and soul developed over time; but it’s also just as likely that James Bond in Dr. No, wearing the author’s own big crown Submariner planted the conceptual seed that a luxury timepiece didn’t have to be a gleaming, polished chunk of precious metal, it could be also tell a story through its “war wounds”, even for someone as well dressed as the British gentleman spy. Enter the vintage 1981 Rolex GMT-Master with “Lava” dial patina. 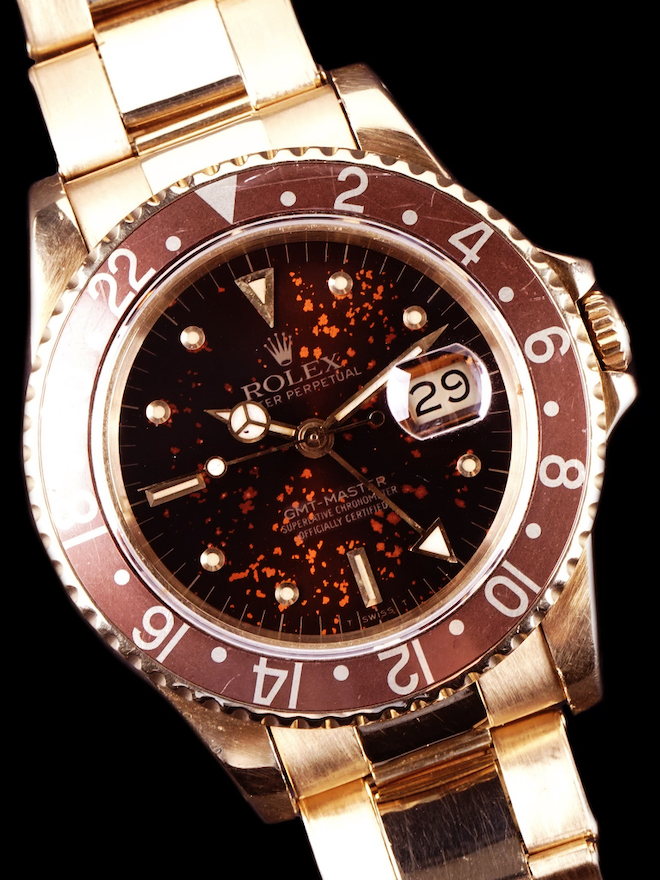 Once upon a time, around the 1980s we believe, complications and finishing were good determinants of watch value, attractiveness and consumer demand. More often than naught, the dials were restored and refinished to look as close to the original production models as possible. But then, it all changed during one fateful Antiquorum “Mondani” vintage Rolex auction – suddenly, repainted and refinished dials attracted derision and a punitive financial loss of value, originality and uniqueness became the singular most important determinant of potential value. Every soon, that ethos boiled down to the steel case of the watch head as well – better left unpolished. 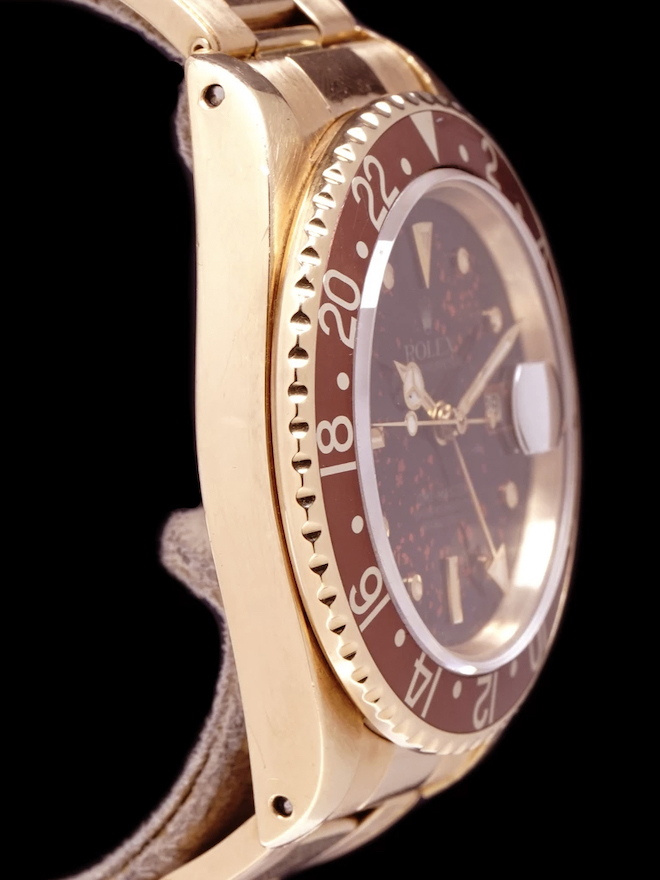 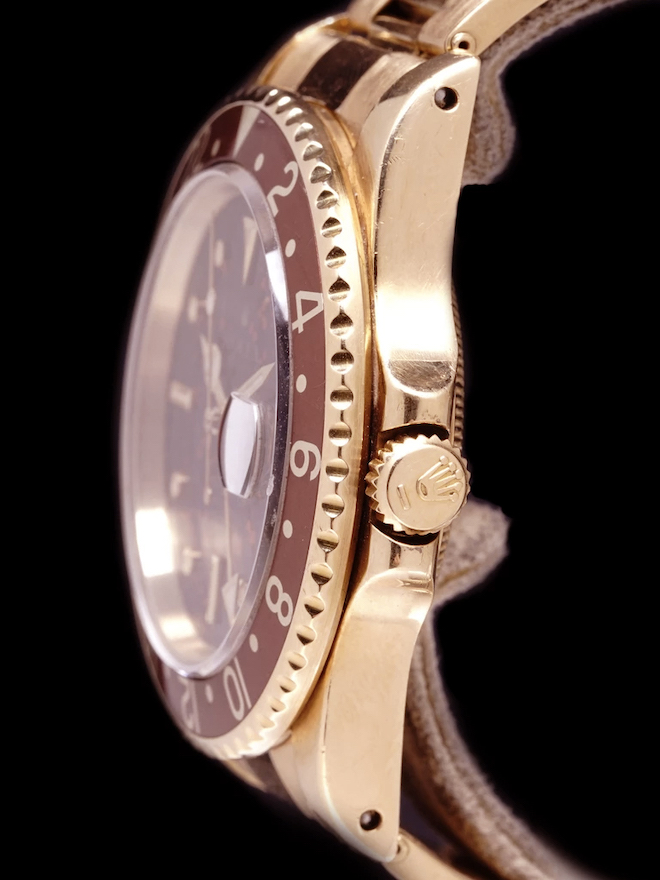 When aluminium bezel inserts and dials begin to fade (unlike their materially superior cerachrome replacements) into vibrant purple or chocolatey dark brown achieving a “tropical” effect (in watch collector parlance). This patina or antique effect typically is caused by strong UV radiation resulting from prolonged exposure to sunlight. Sometimes, these effects are hastened or deepened when the Rolex famed sport watches are repeatedly exposed to salt water or equivalent humid conditions. Like all things, the growth spurt of demand for tropical dial Rolex watches led to a matching growth of supply and suddenly, there was a new need to be more distinctive and special. Enter the spider dials and today, the “lava” dial like the one seen on this yellow gold 1981 Rolex GMT-Master “Lava” Ref. 16758. 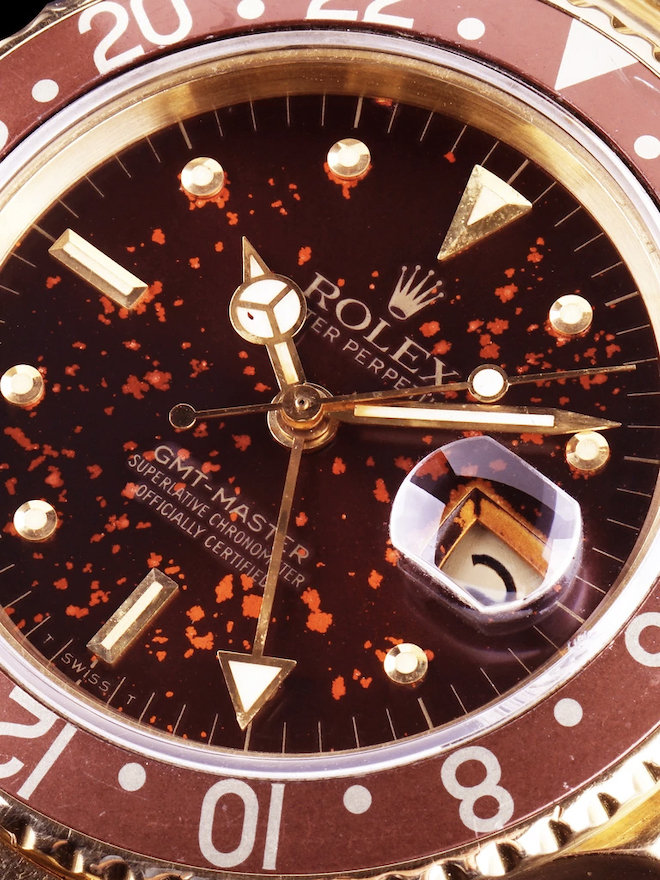 Over time, the lacquer finish can age and crack into a pattern resembling a spider’s web (hence the name), while this effect was not as popular as the “smoked” effect (when a dial achieves a sunburst effect where the dial goes from light to dark as it approaches its periphery) at the start, it began to gain rapid appeal thanks to its rarity comparative to other aged dial effects and that some specimens are particularly collectible because the web effect is not readily apparent until the light catches the cracked surface at just the right angles. The “hot lava” effect as CraftandTailored.com calls it is especially attractive since the mottled surface dots the dial at just the right pacing and spacing.

Launched in 1954, the Rolex GMT-Master was designed to be the sports icon for the literal jet-set. Made specially for the now defunct Pan Am airlines, the GMT-Master became necessary as technological advancements made transcontinental flights possible and Pan Am pilots required a watch for these long haul international flights. 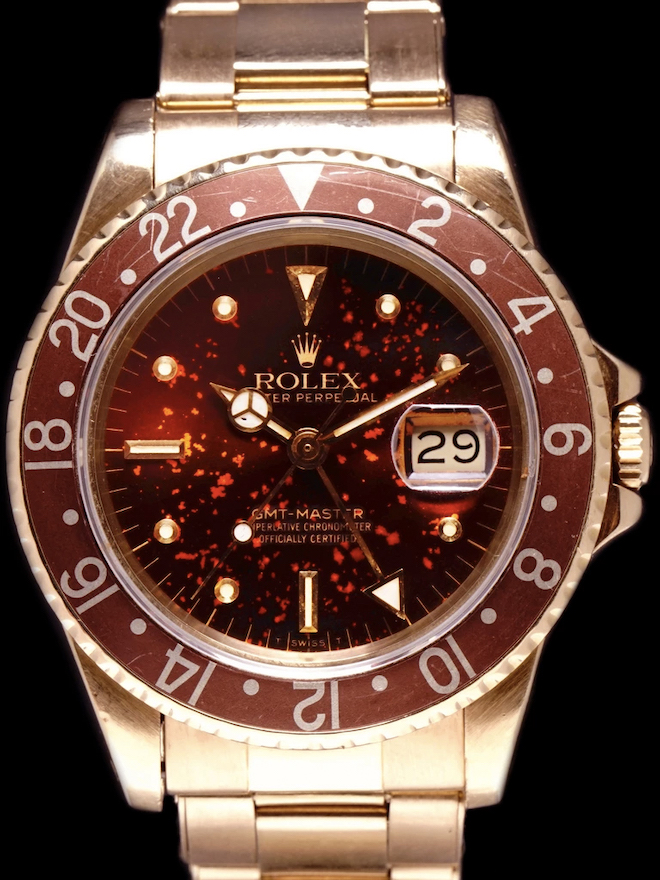 The Rolex Ref. 16758 GMT-Master was first introduced in 1980 and it featured the updated Cal. 3075 with quick set date. This specimen offered by CraftandTailored.com is remarkable in that not only has its bezel patinated into the highly desirable brown or Rootbeer effect, but it also displays a jaw-dropping “lava” spotted reddish-brown dial, matching its bezel.

Furthermore, this particular 1981 yellow gold Rootbeer GMT-Master retains the earlier style rivet bracelet as well as “nipple” hour markers. The tritium luminous material within the nipple markers and the hands have also aged evenly. The date wheel is also era specific with open 6s and 9s.