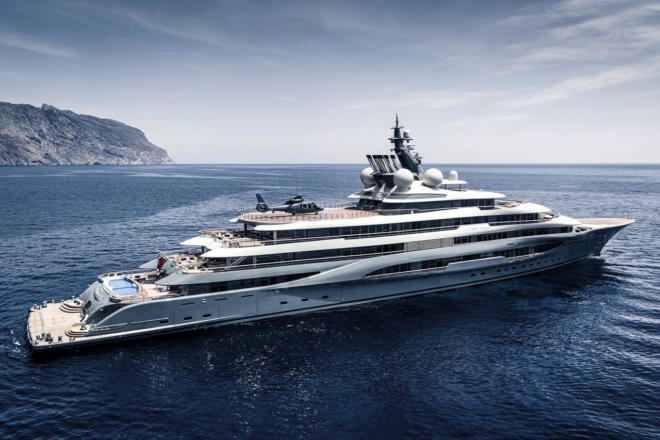 Imperial Yachts of Monaco offers the world’s largest yacht available for charter, and her debut season starts in the Maldives. Weekly rate on application. “I can’t tell you what it  is, and whatever you think, it may be higher”, says Imperial’s Steve Bailet. His 82m RoMEA, also in the Maldives, Seychelles and Thailand, is €850,000 a week ex VAT and APA. Regular readers will be familiar with Lürssen’s just-delivered Project Shu, which is now called Flying Fox and heads the Top 100. Designed by Espen Øino and PYC compliant, her luxurious contemporary interior from Mark Berryman offers 11 suites for 25 guests, all with private sea-view terraces. 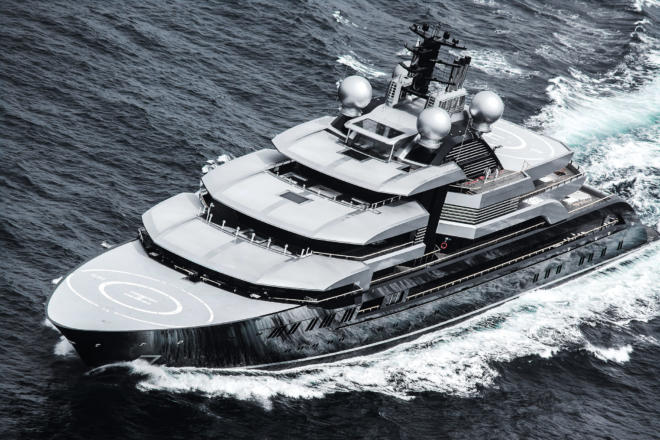 Kept under wraps apart from an intriguing statement that her build name, Project Thunder, stems from the Taoist god Lei Gong, and that she will spend a considerable time voyaging in Asia, Crescent appears in no hurry to explore our exotic seas and straits, venturing only as far as the Med in her first year. The non-yard photo here was taken during early sea trials, a year out from delivery. Designer is once again the ubiquitous Norwegian-born Espen Øino.

Built a decade back by B&V, whose yards were acquired in 2016 by Lürssen, she is referred to as Motor Yacht A because her Russian owner also built Sailing Yacht A at Nobiskrug, another well-known German superyacht specialist. Motor Yacht A was cruising the Japanese coast with a side call at Pusan in South Korea last year, heading south via Fukuoka. Styled by the avant garde Philippe Starck, she remained in Asia-Pacific waters, occupying Marina at Keppel Bay’s largest “island” berth in Singapore more recently until August, which was her second lengthy sojourn at this unique address in the city-state.

New Zealand financial entrepreneur Graeme Hart has owned superyachts called Ulysses from Holland’s Feadship and America’s Trinity, but in his latest venture he has built enormous 107m and 116m explorer-style vessels at Norwegian commercial yard Kleven. The 107m was sold and is now called Andromeda, presently in California, while the 116m Ulysses made her debut in the Med, and was heading for the Caribbean at our deadline. 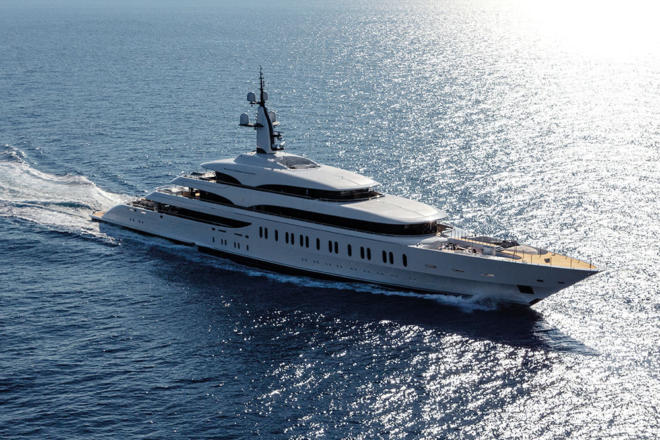 A new entry in the Top 100 and one of three super Benettis to progressively break the distinguished brand’s LOA records at Livorno, IJE is the latest steed of Australian billionaire James Packer, and is named after children Indigo, Jackson and Emmanuele with former wife Erica Baxter. Once a media and casino mogul with a high public profile, Packer is increasingly private in recent years, although old habits die hard, and IJE was spotted at a favourite Med anchorage off Cap D’Antibes. 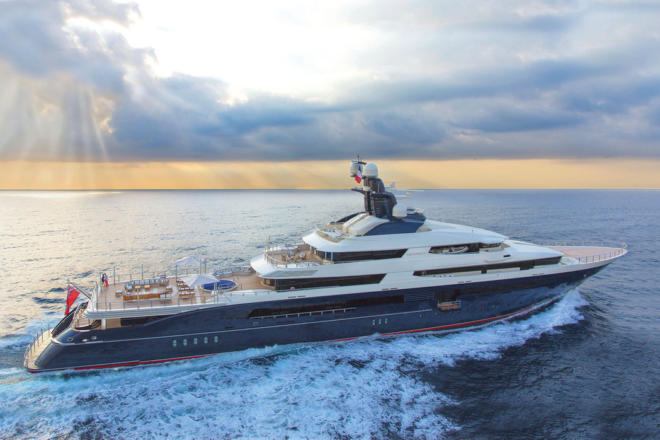 Originally called Equanimity, she became part of Malaysia’s long-running 1MDB affair, and voyaged to remote Asian ports such as Sihanoukville before being arrested in Bali, transferred to Port Klang, and finally sold after a court process handled by Burgess. New owner is Genting Malaysia, which runs an international casino conglomerate including Resorts World, and the idea apparently is that she can be used in entertaining VVIPs and high rollers. AIS Marine Traffic placed her off Beaulieu-sur-mer in the ebbing Med season. 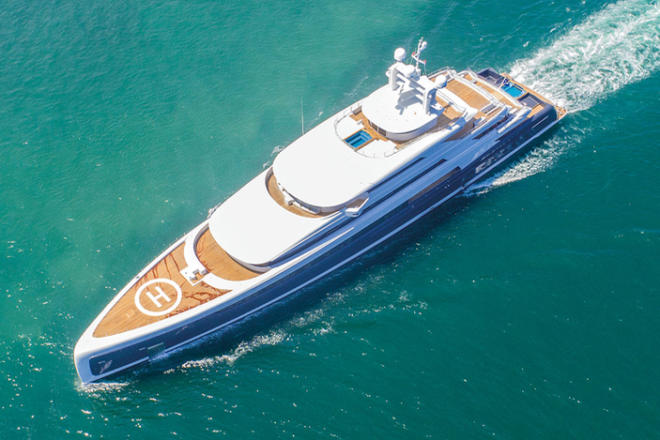 A project of international consultants and designers at Pride Mega Yachts in China, Illusion Plus “blends performance and comfort”, say agents Y.CO. “She offers long range world cruising, a contemporary luxury interior, and an unparalleled sense of space. Renowned Dutch naval architecture by Azure, and a sophisticated six-deck exterior by Rainsford Saunders Design. She features a dedicated spa, beauty salon, gymnasium, two jacuzzi pools and a touch and go helipad”. Available for sale.

Now owned by former equity partner Tan Sri Vincent Tan of Berjaya fame, Asean Lady is the brainchild of a founder of super yachting in Asia, Brian Chang, whose first vessel of this name cruised Malaysia’s west coast holiday isles long before Langkawi had an airport. He built his unusual two-hull proa in the early 2000s to achieve greater stability at sea. Kept at Raffles Marina in Singapore, the vessel has also been used by Brian’s brother Julian, a Burgess Senior Advisor and well-known figure at Monaco Yacht Show with society wife Sandra.

Run by James Packer’s sister Gretel, Arctic P is a large converted ice breaker whose lines are less than sleek, but she has been in the family for years, and makes up for her looks with a portfolio of memories. Located in Malta when last checked, maybe having some work done. We had dinner with mum Ros Packer recently aboard The World, the passenger ship owned by its residents, and asked why she kept an apartment there when she had access to several superyachts. It seems if you have invited guests, there are still umpteen things to be done, even with lots of crew to help. On The World, one simply turns a key in the door. See also 5 IJE.

A large fleet of superyachts is due in Asia-Pacific waters in 2020, among other things for the Tokyo Olympics mid-year and the build-up to the America’s Cup in Auckland in early 2021. We can’t list them all, and in some cases decisions have yet to be made, but Southeast Asian agents advise that Ace, which voyages with her Damen 67m yacht support vessel Garçon, is definitely returning for the 2020-2021 season.

Largest ketch in the world, and recently at lovely Port Louis in Mauritius, Aquijo or AQuiJo has been cruising privately and chartering in the South Seas, from Papeete and Fiji to the Indian Ocean. American designer Bill Tripp often works with the Dutch performance sailing yard Vitters, but for this project they had to enlist the help of fellow Dutch builder Oceanco. The vessel belongs to the Norwegian billionaire Kjell Inge Rokke, who is also building the world’s largest motor yacht, Rev, at 182m. 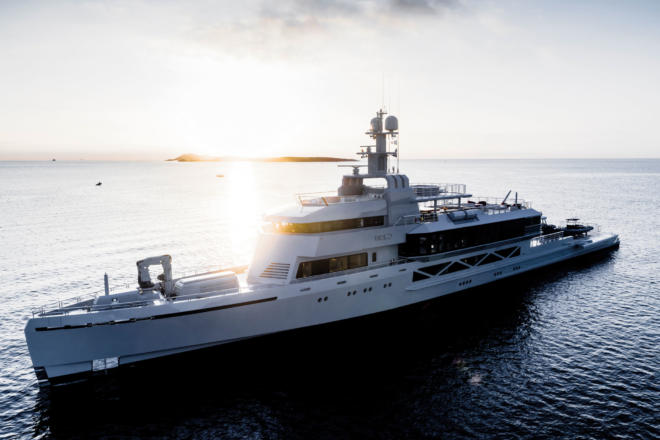 Formerly known by her build name Silver Loft, this Western Australia-built luxury expedition vessel designed by Espen Øino was delivered mid-2019, the fifth SilverYacht in a series that began with  two 73m and two 77m slim, fast and fuel-efficient aluminium yachts. A sister ship to Bold is under construction at the yard, and in the Pearl River estuary on the China Coast, production of 35.5m Øino SpaceCats has begun. Bold has a maximum speed of 24 knots, and a remarkable range of 5,000 nm at 18 knots. Contemporary interiors include teak and oak panelling, and metallic painted features combined with oak and marble floors. 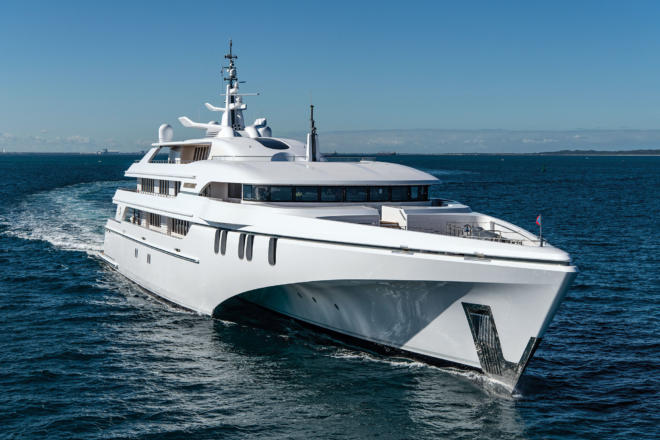 Located literally next door to SilverYachts in the Australian Marine Complex at Henderson, south of Perth, Echo Yachts has also delivered the spectacular trimaran White Rabbit G, a development of the 61m White Rabbit E currently cruising in the Med for the same Singaporean family owners. Sam Sorgiovanni handled styling and interiors, and the complex construction was developed by Steve Quigley of One2three naval architects. The concept is to provide a smoother passage offshore. Echo Yachts is open to further custom builds, and for this one they built the 52m composite support vessel Charley. 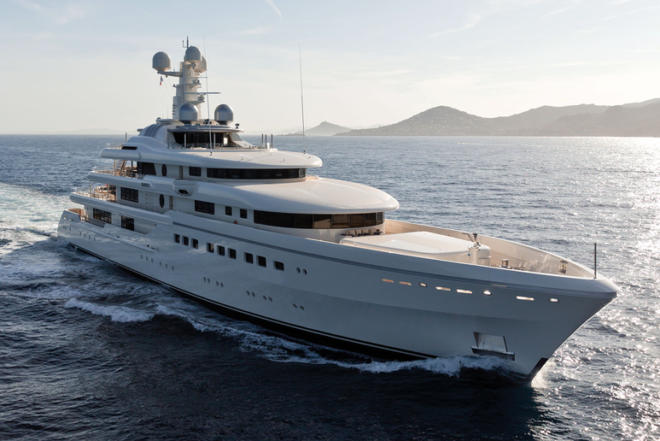 Available for charter in the Maldives, Seychelles and Thailand, the 2015-built RoMEA is, like Flying Fox, handled by Imperial Yachts of Monaco and a new entry in the Top 100. Designed by Terence Disdale, accommodation is for 12 guests in four double and two twin staterooms. Facilities aboard and for water sports and venturing ashore are described as “indulgent”. Boat International ranked her as #2 superyacht for charter in the Western Med, so her sojourn in the Indian Ocean and Southeast Asia is eagerly anticipated.

Westfield shopping centres patriarch Sir Frank Lowy, once a poor Hungarian émigré to Australia, bought a fully-custom Amels after a compatriot, media mogul the late Reg Grundy, did the same with Boadicea. Ilona is kept lately in Barcelona, but Lowy and his once soccer-mad sons have other smaller superyachts in Asia-Pacific waters. The original vessel has been lengthened after refits at Amels, and most recently at Abeking and Rasmussen.

A work-in-progress for a well-known Asian yachtsman and philanthropist at the picture-postcard Royal Huisman yard near Amsterdam, this three-masted schooner is scheduled for delivery in 2020. Her 38m flybridge deck was fixed to the yacht’s aluminium hull last year, and work has proceeded apace in building halls specially extended for the project. The Panamax schooner features a plumb bow and carbon rigging by sister company Rondal. Accommodation is for 12 guests and 13 crew.

Included due to a sojourn visiting Japan, Montkaj is Middle East-owned and was built in 1995, back in days when Amels had a huge facility at Makkum that rose spectacularly from the otherwise flat Friesian cow-strewn countryside. The super shed was later taken over by Feadship, when Amels moved to Vlissingen near the Dutch- Belgian border. The steel-hulled, aluminium topsides vessel has undergone subsequent refits. Exterior and interior “casual chic” design is by British-based Terence Disdale. 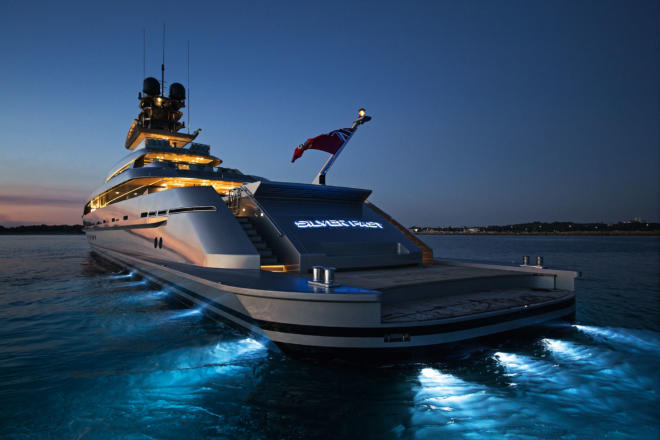 Fourth and most advanced of the ecofuel-efficient Silver Series, Silver Fast’s maiden voyage from Australia to Europe took 21 days with one fuel stop. She can accommodate 18 guests and 16 crew, and is cruising Indian Ocean resort islands during the Med winter. Design is by Espen Øino, and interiors are created by Vain Interiors. A truly remarkable vessel. Sister Silver ships are based in Pacific and Middle East waters, and the 85m Bold ex-Silver Loft was delivered mid-2019.

Bucking a trend that favours South Seas passages over North Pacific ones, the former TV sailed from Osaka to San Francisco recently, but is now back in the Fijian islands. Readers of Miguel de Cervantes’ celebrated Don Quixote will know that Rocinante was his horse. Pastures of the Pacific are clearly to this vessel’s liking, as it has cruised particularly the Pacific for some years. 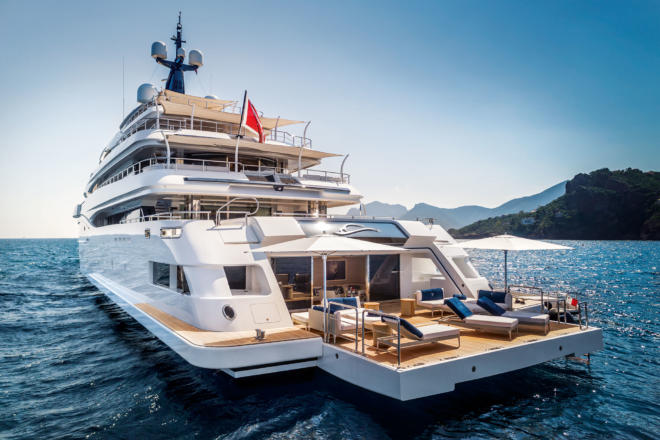 Owned by a Singapore-based Australian businessman, the latest Cloud 9 was one of the leading displays for Italian yard CRN at Monaco Yacht Show in 2018, and has cruised extensively in traditional charter waters since.