The World’s Most Spectacular Houses Hidden in Plain Sight

As culture, tradition, religion and societal trends continue to evolve, so has architecture. From the stone-age to the modern skyscrapers, architectural design provides society the safety of a physical environment – which in recent time, no longer solely centers around fulfilling a list of bare necessities. With an increased focus on aesthetics, architecture is considered an artistic method, providing creative outlets for expression and individualism, while responding to each city’s functional needs through the incorporation of modern technology. 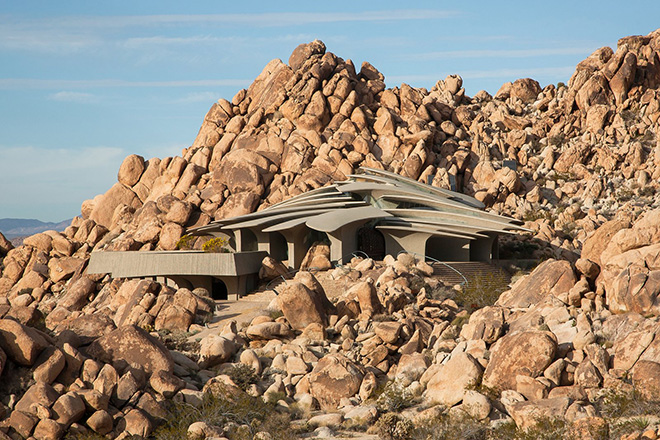 As much as sculpture as it is a residence, the High Desert House was designed by American architect, Kendrick Bangs Kellogg, who is revered for coining “organic architecture” in the creation of his numerous distinctive buildings. 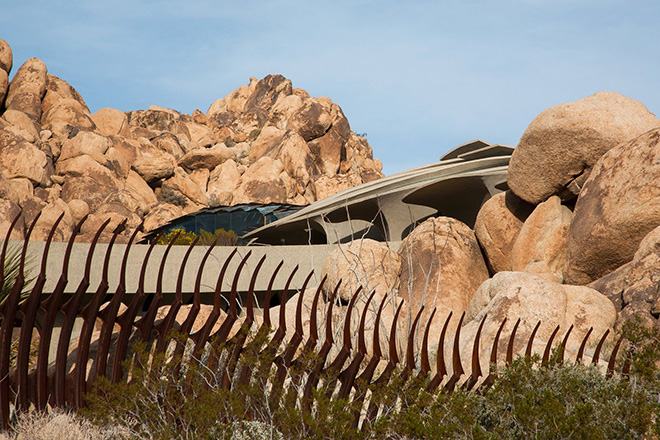 Featuring concrete pillars which overlap into an overhead canopy, the High Desert House presents the perfect nature-to-structure balance, with specially tailored functionality to serve its inhabitants whilst melding seamlessly into the surrounding landscape. 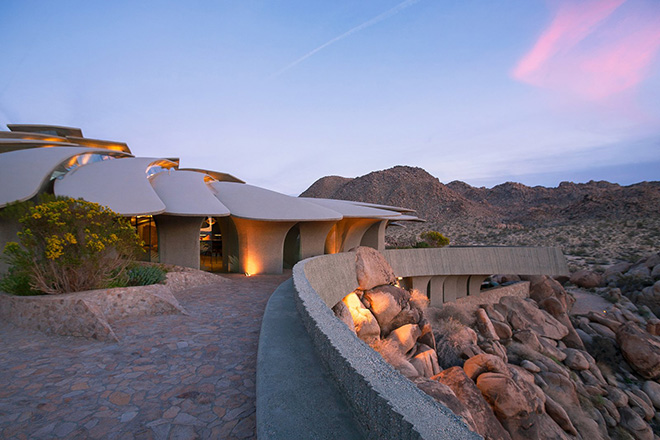 Situated amidst the remotely rocky desert landscape of the Joshua Tree National Park in California, the house incorporates natural elements such as boulders which are visible throughout the interior, and the hill’s natural slopes that form the master bedroom’s walls. 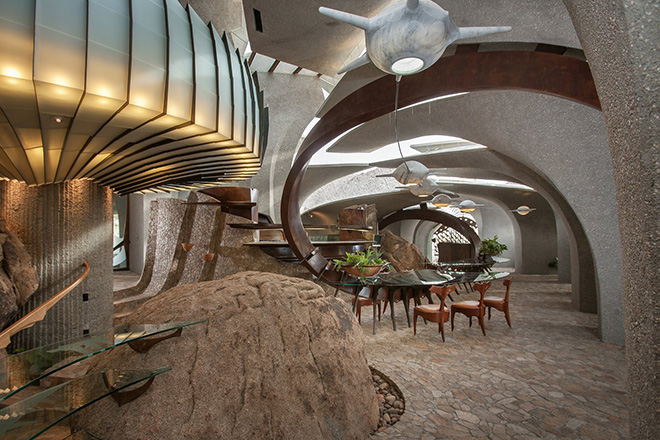 Engulfed in a mix of concrete and glass slabs, the organic architecture of the house is emphasized by the sun’s shifting light and its overall cave-like formation. Originally commissioned as a home for fellow American watercolor artist, Bev Doolittle and her husband, the project underwent 20 years of development and construction and is fully furnished with bespoke handcrafted amenities. 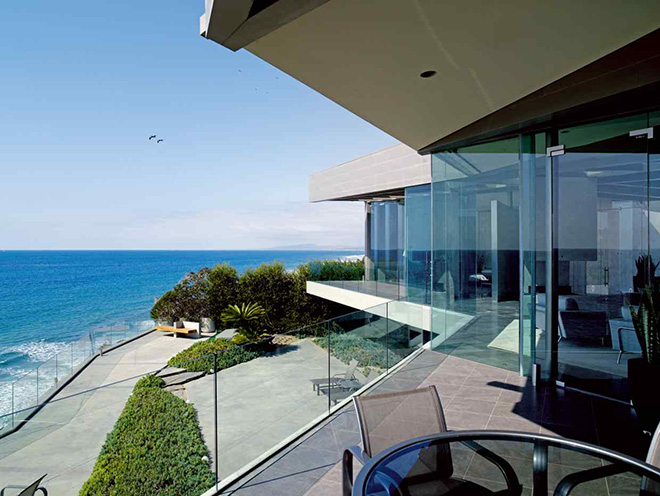 Undertaking each project as a unique response to site and setting, Wallace Cunningham, is the president and principal designer of the California-based Wallace E. Cunningham Inc. and widely acclaimed for his residential work. Incorporating fluid lines, curving pools and roof canopies that connect visually and physically with the landscape, sea and sky – this 7,500square-foot house features breathtaking views of the sea through floor-to-ceiling windows in the main living spaces, plus a series of balconies and terraces. 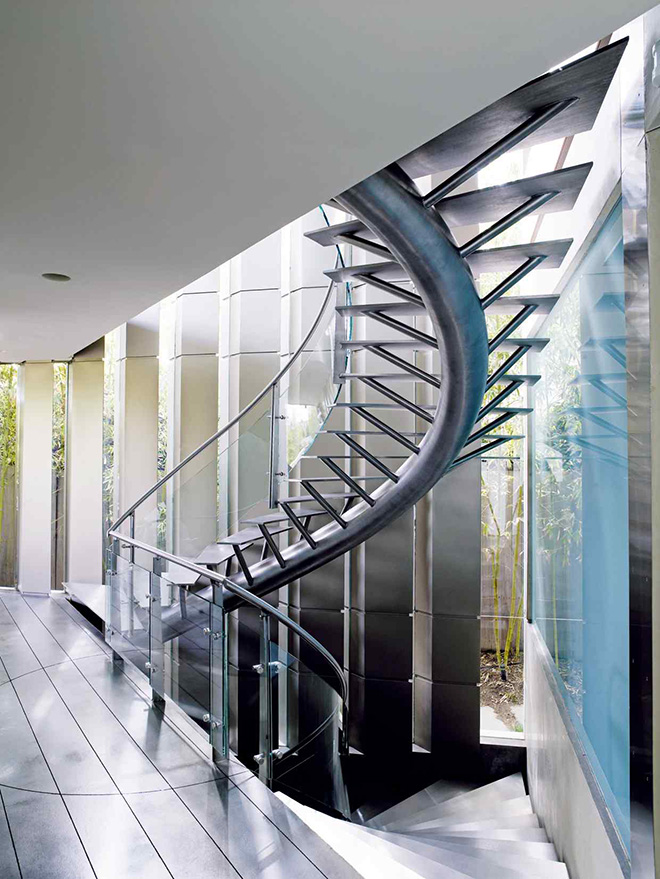 Built predominantly with steel, concrete and glass, the house is centered upon an immense crescent-shaped, infinity pool. Flanked by glass and decorated with black tiles, the pool itself meticulously highlights the details of its surrounding environment. Exploring the depth of space, this house was inspired by the phases of the moon and its impact on the sea – offering guests a sensation of vastness and vital amplitude. 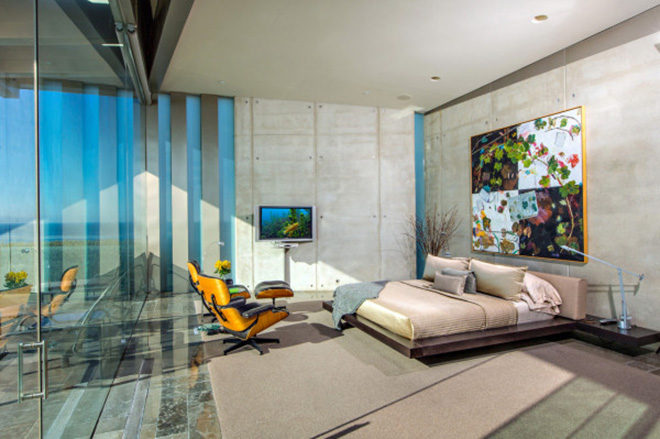 While considered a beach house, the shapeshifter is built like a museum of-sorts. With four bedrooms, two bathrooms, an office gym, garage space for two cars – the Crescent House in Encinitas, California is considered one of Cunningham’s most adventurous and dramatic expression of architecture. 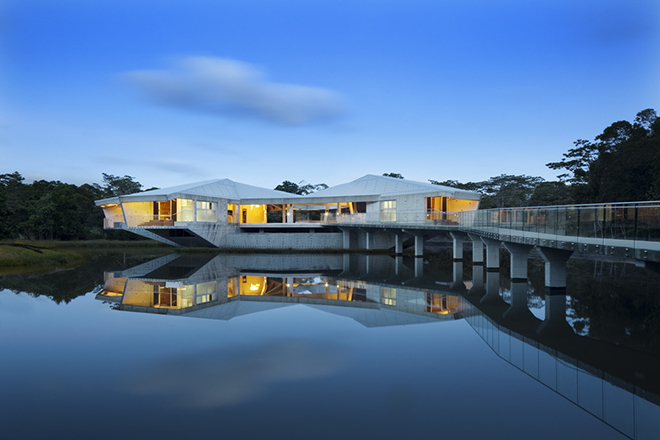 With a quest to deliver carbon neutral solutions to an environmentally sensitive off-grid site on beach front land in Daintree, Australian architect, Charles Wright and his team, successfully developed the Stamp House. 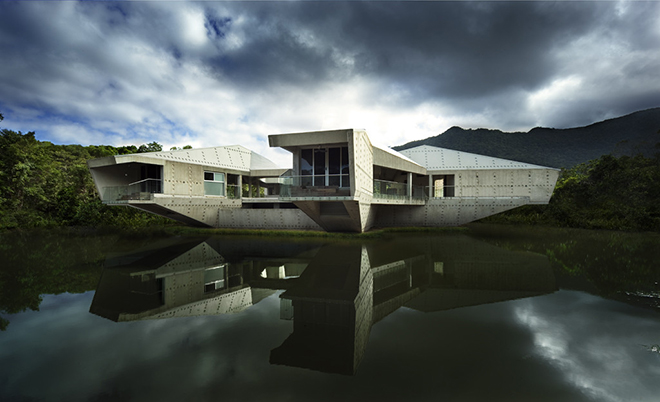 Perched over a 26 hectare engineered water ecosystem, this home is cantilevered over the edge of the lake and accessible through a bridge. State and Government approved, it is designed to withstand category 5 cyclones and prevent flooding – classifying it as an official cyclone shelter.

Featuring living, dining, entertainment, recreational and swimming facilities, the house centers around a landscaped courtyard, central pool, and a cascading waterfall installation. Located in the wings, the communal spaces offer luxurious views of the natural surroundings which partially opened sides that shield guests from the unpredictable tropics whilst facilitating consistent air circulation. 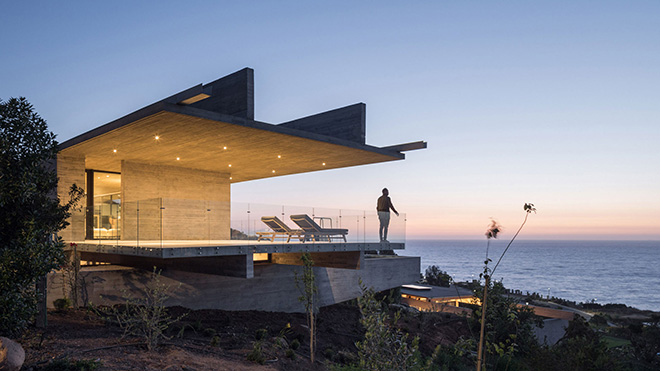 High up on the hillsides of Chile, sits the elongated concrete Casa H by architect Felipe Assadi. Overlooking the vast Pacific Ocean, the unconventional H house occupies the resort town of Zapallar in the Valparaíso region. 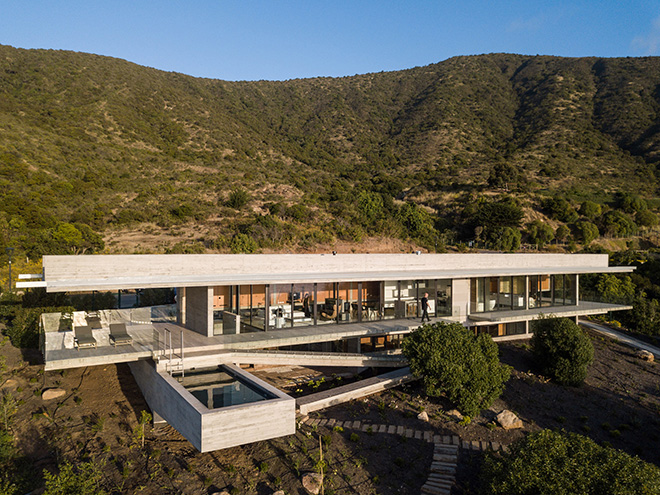 Features covered balconies and a perpendicular swimming pool, the house appears like a beam laid across the sloping hill, running parallel to the coastline with a stepped path leading down to the beach. Raised off inclined ground, the house includes passageways which connect each level through its base, enabling each end of the building to stretch over 23 feet beyond its main structure with uninterrupted views. 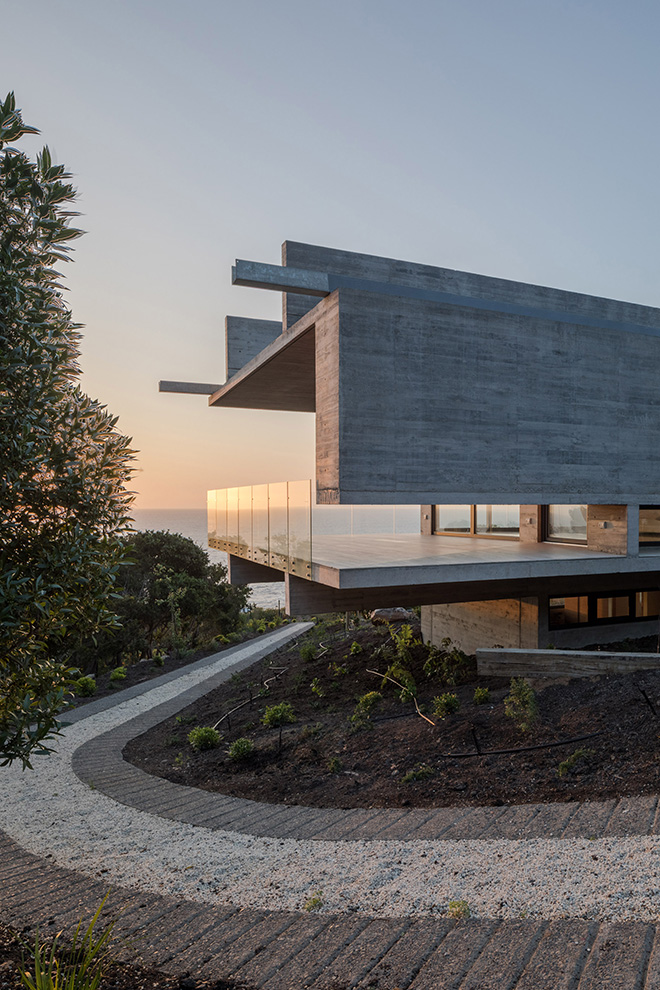 With open-plan living area, a dining room, master suite and kitchen situated on the upper level, each space is divided and lined with sliding glass doors which connect at the terrace and the interior décor is kept minimal. 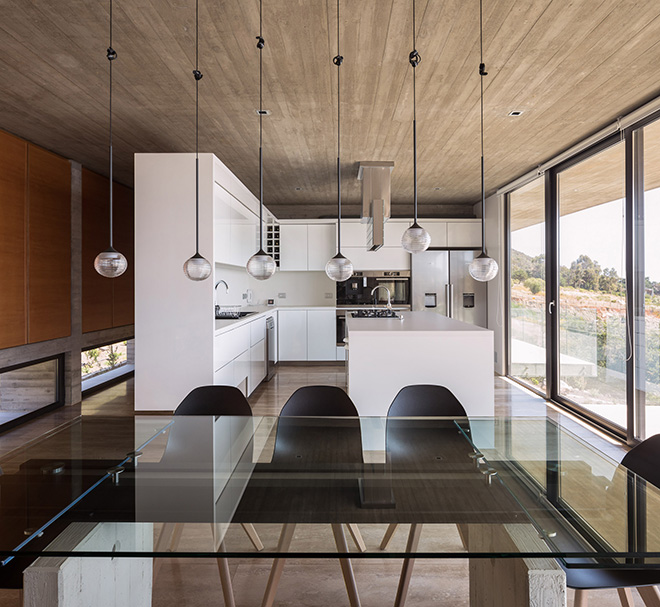 The Casa H was finished 2018 with light wood flooring, exposed board-marked concrete on the ceilings and lacquered white cabinetry in the kitchen and bathrooms.

House for the Poem of the Right Angle 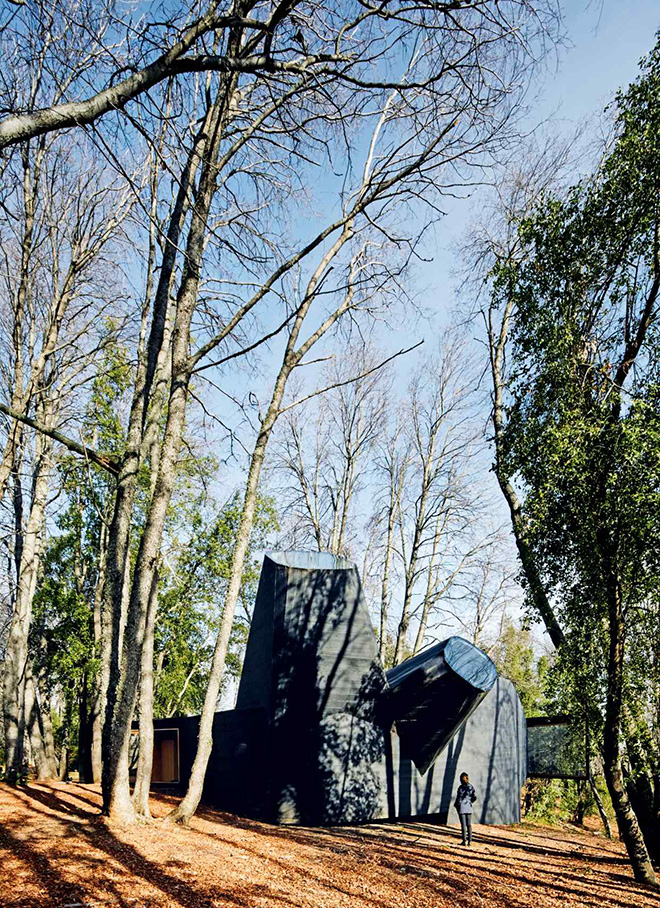 Named after a book by Swiss-French architect and author, Charles-Édouard Jeanneret, who is also known as, Le Corbusier – the House for the Poem of the Right Angle resides in the woodlands of Andes, near Vilches.

Inspired by books and the natural environment, Chilean architect, Smiljan Radic, intended for the black sculpted house to appear as a shadow amidst the wilderness with a limited impact on nature – creating an eerily solitary atmosphere. 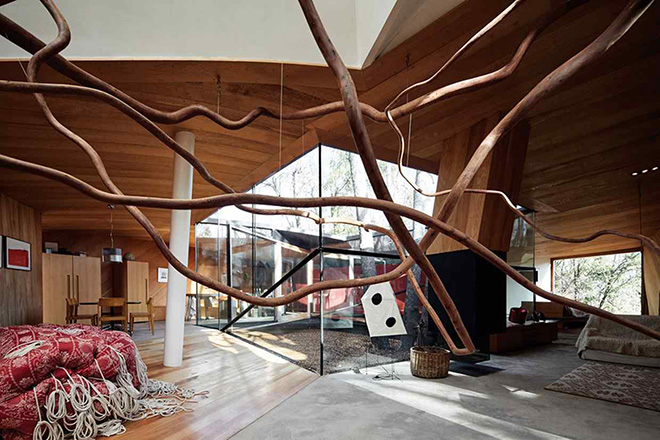 Positioned alongside a stone garden, the low-slung concrete building features three glass-capped periscopes which appear as branches, framing the sky. Relying heavily on natural light, the house is predominantly lit with natural light through ‘picorocos’ or ‘light cannons’ which puncture the ceiling.

Built in 2012, the house portrays the ultimate conversation between structure and nature as equals, featuring natural elements throughout the interior and exterior which seamlessly bridge the gap between the man-made luxury and earthly elements.