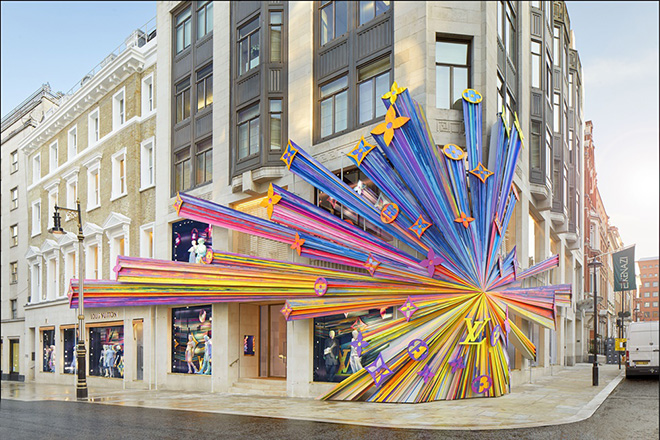 The doors of 17-20 on New Bond Street, London which have housed Louis Vuitton since 2010 and have undergone 14 months of immense renovation. After immense ideation and reconstruction by New York based architect, Peter Marino – Louis Vuitton’s highly anticipated reopening took place last Thursday, 24 October 2019. 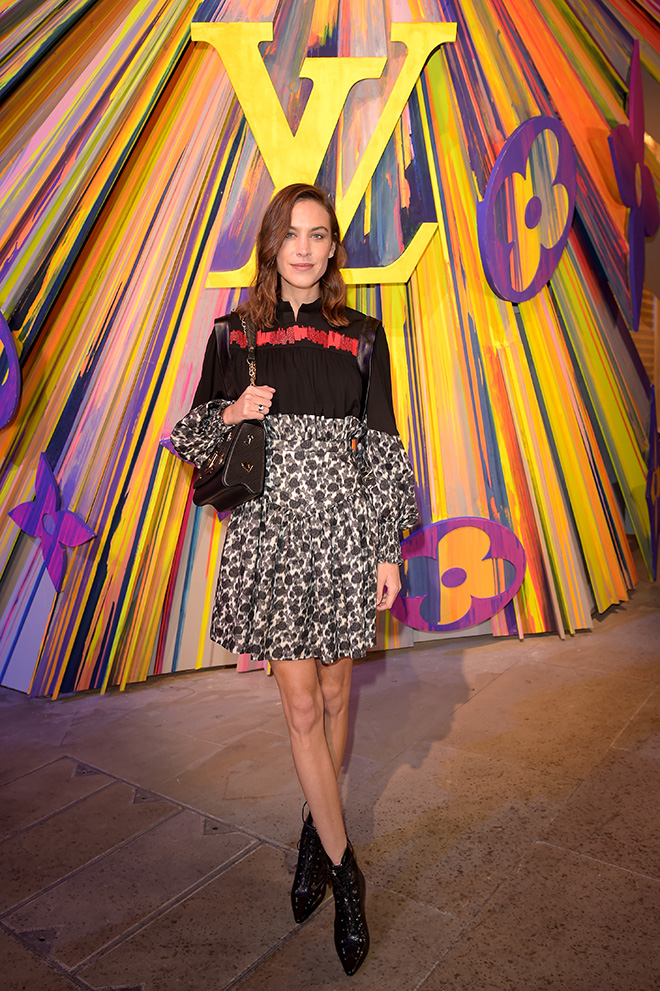 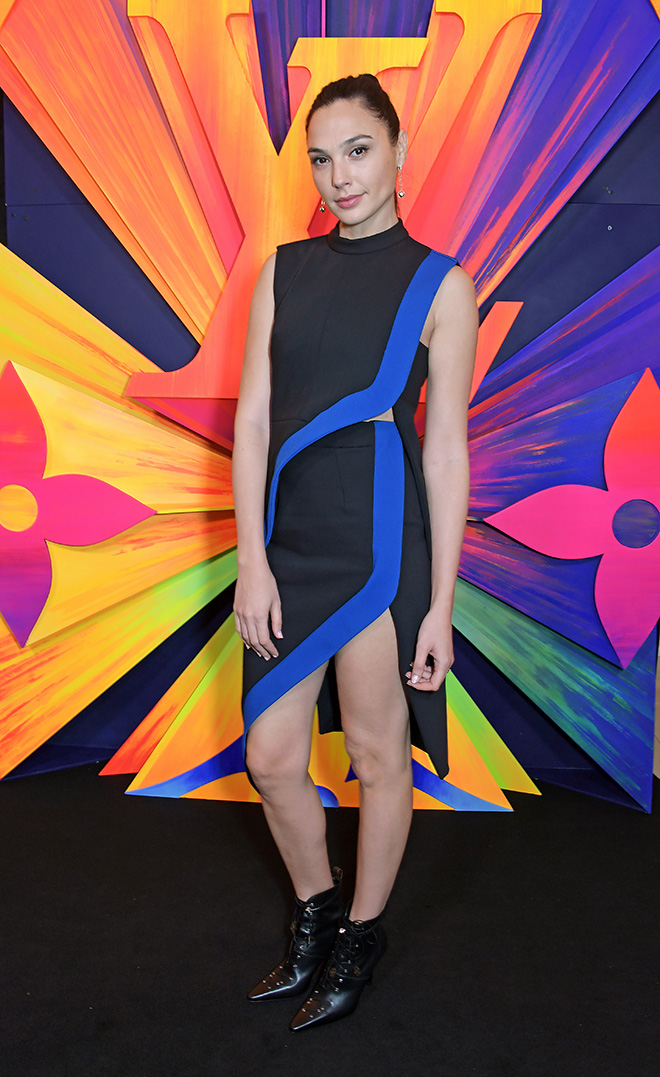 attends an after party celebrating the re-opening of the Louis Vuitton New Bond Street Maison at Annabel’s on October 23, 2019 in London, England.

Guests were given the opportunity to tour the store where Virgil Abloh also features his third Louis Vuitton collection for Spring/Summer 2020. His latest work, embellished in floral design, maintains the ultra-luxe and sporty aesthetic while appearing considerably less hard-edged and streetwear-focused. The slightly cartoonish collection can be found on the lower ground floor, in a colorful space dedicated to men’s ready-to-wear shoes and fashion. The floor or two above this is occupied by Nicolas Ghesquière’s designs.  As creative director of Louis Vuitton since 2013, this French fashion designer is known for resplendent women’s accessories and ready-to-wear collections. The New Bond Street Maison is the only other store, aside from the Maison Vendôme, showcasing Louis Vuitton’s most exorbitant jewellery – which include gemstones, sapphires, emeralds, spinels and Santa Maria aquamarines. 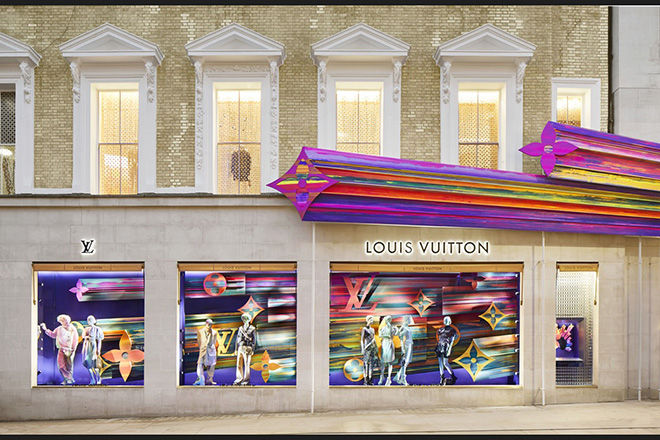 Come for the jumbo-stitch panel art and stay for the rivet-punched boots. The newly revamped space, is part of what numerous retail and luxury brands call “The Spectacle Store”, emphasizing on Instagrammable experiences that can’t be replicated online. 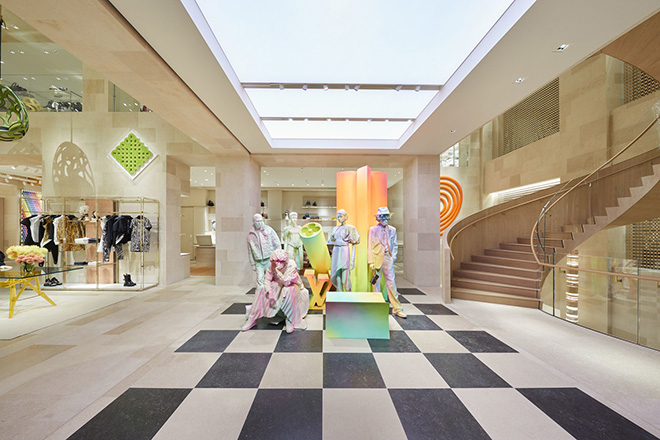 Louis Vuitton’s engagement with artists is nothing new, in 2001 the brand featured graffiti-painted bags by Stephen Sprouse – a fashion designer and artist credited with pioneering the 1980s mix of what he’s coined as, an uptown sophistication in clothing with a downtown punk and pop sensibility. Following the collaboration with Stephen, their 2013 menswear collection incorporated prints by British visual artists and brothers, Jake and Dinos Chapman. The duo are recognized for their purposefully outrageous artistic expression. 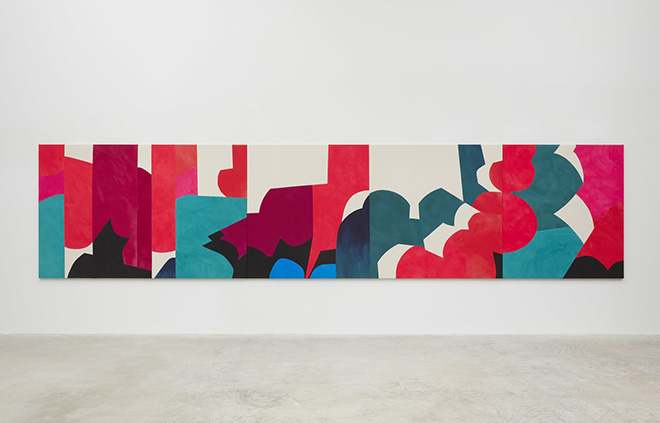 Louis Vuitton’s highly anticipated reopening showcases a multi-storey expo fitted with gallery style work by nine artists, such as Sarah Crowner – a Brooklyn-based artist whose energizing work is revered in New York art circles. She is best known for her geometric abstractions which evoke a 1950s style of hard-edge painting. Her 7-metre-wide frieze sits mounted on the wall of the renewed Louis Vuitton stores’ silk scarves and leather goods section. Her work is highly technical – a combination of 50 to 60 different sections of painted canvas, cut and stitched together by hand, creating a unified whole. Other artists featured include, James Turrell, Josh Sperling and Aaron Curry. 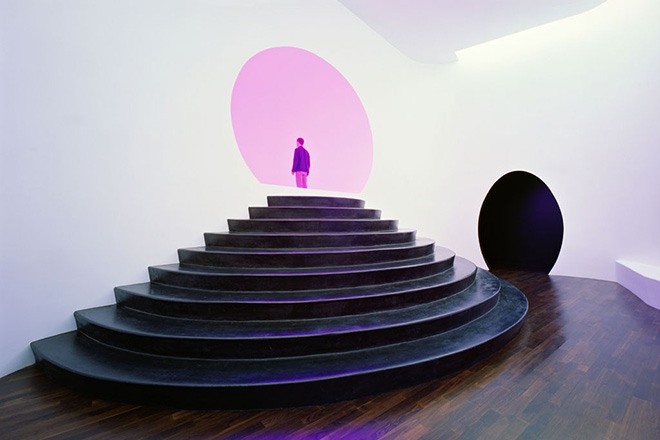 Louis Vuitton’s latest interior design, shows signs of evolution as the brand leans toward creating a lighter, clearer and happier ambience. The palatial space, floods with both natural and artificial light. It features vintage furniture by Enzo Mari and Pierre Paulin, Tall Glass and the immersive LED screen used in Drake’s Hotline Bling music video, installed front and center by light-artist James Turrell. His work amplifies the sensory experience, celebrating light’s powerful effect on the spectator’s eye, body and mind. His current installation, titled “Akhob”, spans 77ft long, 33ft high and 44ft wide. It is potentially the biggest piece of art the new Louis Vuitton store features. Its positioning signifies a point of escape from the bustling streets of London and the entrance into the rarefied world of prestige. 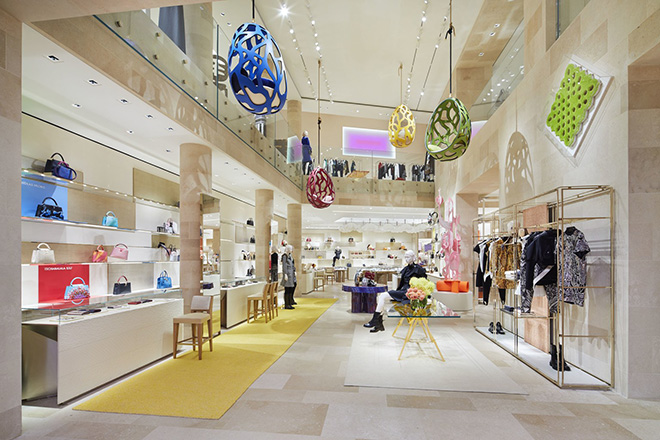 The Louis Vuitton New Bond Street Maison has grown to be more than a store. It’s a gallery and a one-of-a-kind cultural destination. It along with several other brands, ride on the success of the increasingly lucrative “experience economy” which demand the combined presence of entertainment, exhibitions and other related activities.