The Lady Arpels Pont des Amoureux, a poetry of Time and Love 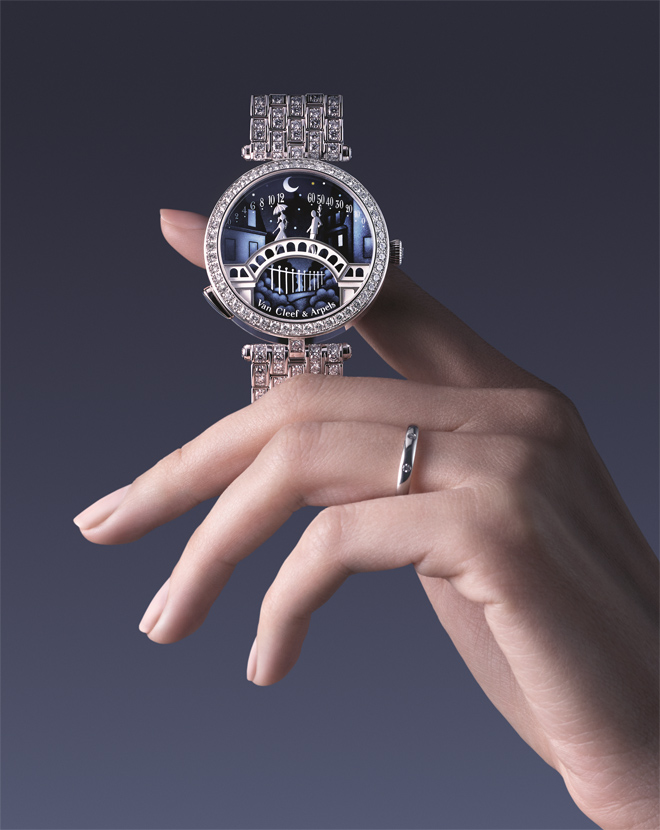 Whether accessorising legendary actresses, celebrate the union of kings and queens, or honouring the devotion of two lovers, infusing the Poetry of Time with the rhythm of the human heart. Inspired by immortal love stories of Aida and Radames, Ulysses and Penelope, Tristan and Iseult, the Extraordinary Dials collection employs the virtuosity of traditional craft, complementing the animated face of The Lady Arpels Pont des Amoureux. 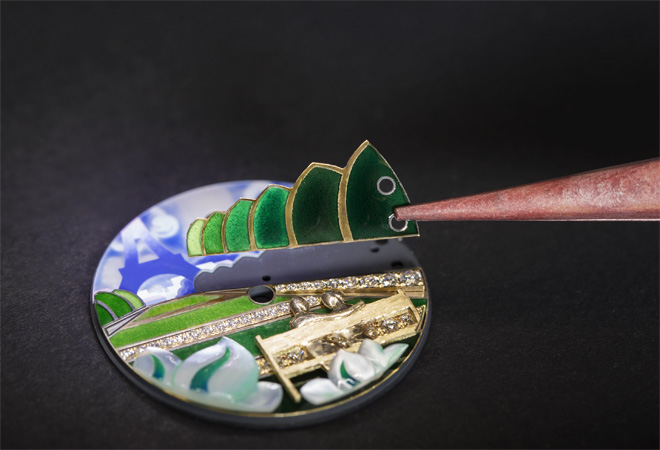 An icon of Van Cleef & Arpels since 2010, the Lady Arpels Pont des Amoureux collection perpetuates the mysteries of artisanal craft and enduring love in a series of eight secret watches with interlaced precious stones and subtly concealed dials.

Van Cleef & Arpels raises the bar on the art of watchmaking  with a distinctive, if literal dimension of storytelling, drawing from its own heritage and of course evocative sources of inspiration like myth and history.

Love, Luck and Fairy Tales, Each a moment of Wonderment

Over the coming years, numerous pieces would accompany the world’s best-known romances, from the Duke and Duchess of Windsor to the marriage of Grace Kelly and Prince Rainier of Monaco but it would be The Lady Arpels Pont des Amoureux which would put Van Cleef & Arpels on the map of penultimate purveyors of fine watch-crafts.

“Night is falling on the rooftops of Paris. In the sleeping city, two lovers are thinking of each other, wishing that they could meet. They rush through streets bathed in a nocturnal glow; silent gardens and crystalline fountains guide their steps. They walk along the Seine with beating hearts, then strike out onto the bridge that will bring them together. She comes closer with a light step, beneath her umbrella; he hides a rose behind his back as a love token. At the stroke of midnight, they finally meet with a kiss in the soft moonlight.”

Unlike the initial launch collection, the new Pont des Amoureux allows her owner to recreate the poetry of time at an instant of her choosing – the self-winding mechanical movement is equipped with a retrograde module, developed exclusively for the Maison, similar to the one which debuted nine years ago but with an additional animation-on-demand module: the decisive kiss can be relived at the press of a button instead of waiting longingly for the young lovers to move progressively towards each other: the lady marking the hours while her beloved crosses his half of the bridge in 60 minutes.

It used to be a tender reunion at midday and midnight, but regardless of time, the dial represented Paris at night. Now, the Lady Arpels Pont des Amoureux is available with a scene of Paris alive and awake the following day. 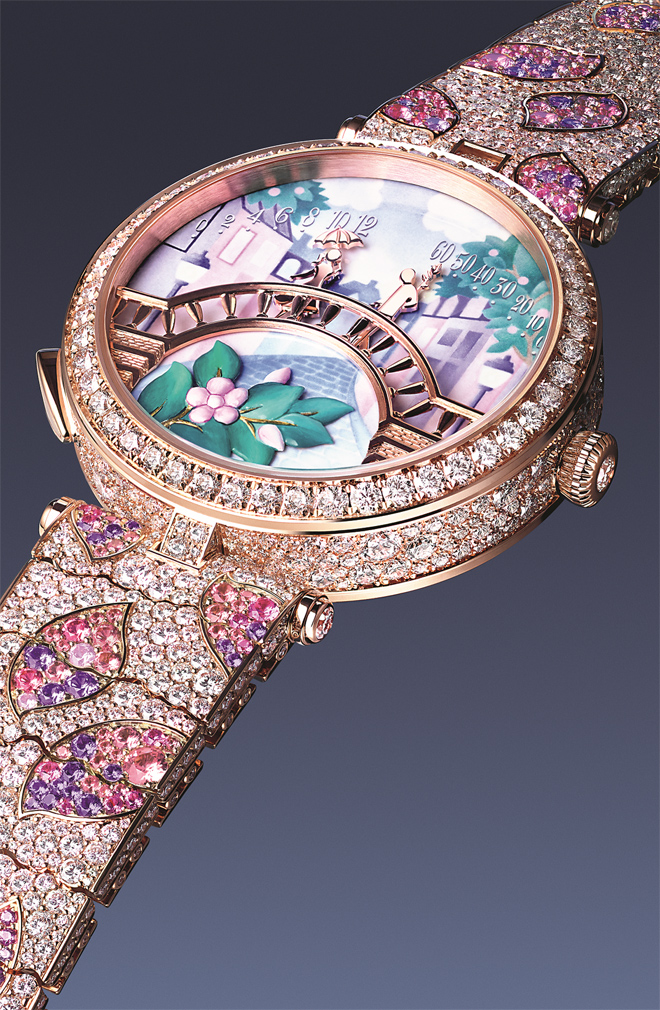 Swallows dance between the clouds. Already missing each other, the lovers set out through busy squares, past facades tinged with soft colours. Reaching the riverbanks, they kiss at midday in the enchanting setting of a Parisian bridge.

In breathing life into the Lady Arpels Pont des Amoureux, Van Cleef & Arpels has combined traditional skills requiring patience and expertise. The grisaille enamel technique – developed in France from the 16th century onwards – is showcased in different ways on the two dials. On the original watch, is it used in its traditional version, with white enamel powder – known as “blanc de Limoges” – placed on a dark background. The resulting play of contrasts strikingly depicts the light and shade effects of the Parisian night. On the dial of the daytime version, the Maison has used coloured grisaille enamel for the first time: the craftsmen in the workshops used pink and blue enamels against a white background, to evoke the gentle quality of daylight. This type of enameling calls for 30 to 40 hours of work, with each dial being fired some ten times to achieve the desired result.

Van Cleef & Arpels is unveiling three new Charms Extraordinaire creations within its Extraordinary Dials collection, what it lacks in stirring animation found on the Lady Arpels Pont des Amoureux, it more than makes up in the exquisitely hand painted miniature tableaux of Paris’ most emblematic locations. 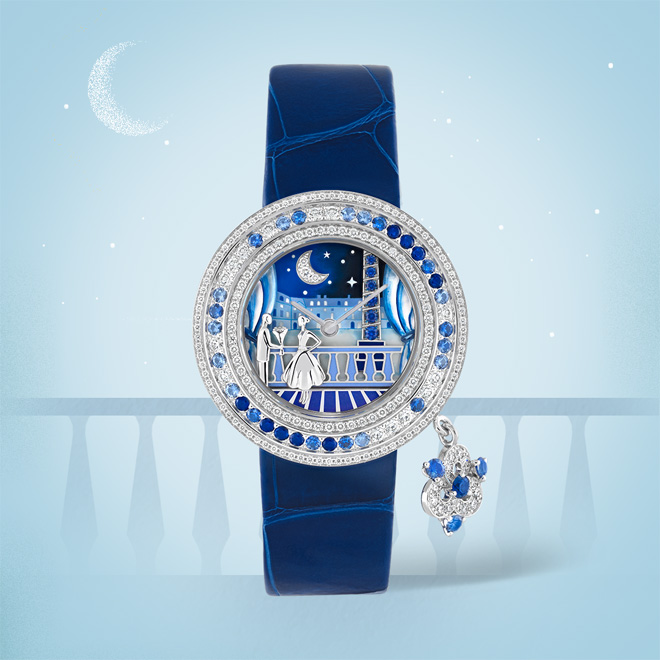 Expressing the desire to see each other again, the Charms Romance Parisienne Retrouvailles watch pictures the young lovers’ first tryst. They are reunited at nightfall, on a balcony overlooking the Place Vendôme, in the bluish light of a diamond moon. 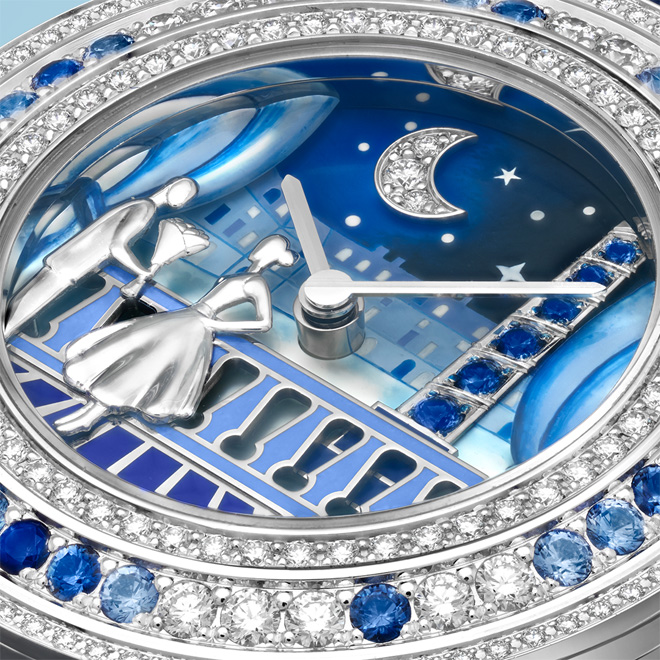 On either side of the dial, curtains of carved and painted mother-of-pearl reveal a landscape in which traditional crafts converge. Enameling and gold carving combine with miniature painting to echo the bezel’s gradation of blue sapphires, which cloak the watch in a mysterious glow. 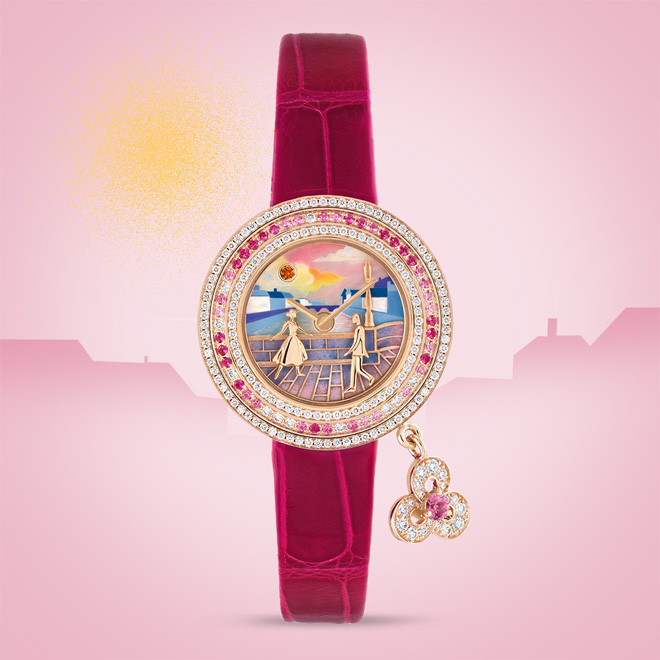 On the Pont des Arts, above a Seine bathed in gentle morning light, a man and woman meet. Their silhouettes, sculpted in rose gold, turn towards each other; their eyes come together, never to part. 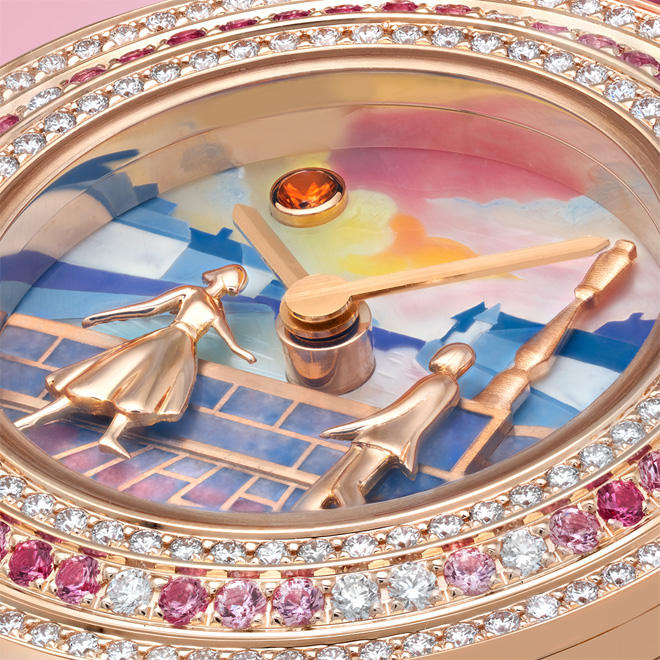 Their first emotions bloom in an enchanting setting illuminated by a spessartite garnet sun, and embellished with champlevé enamel and miniature painting. On the bezel, a gradation of pink sapphires highlights the gentleness of the scene. 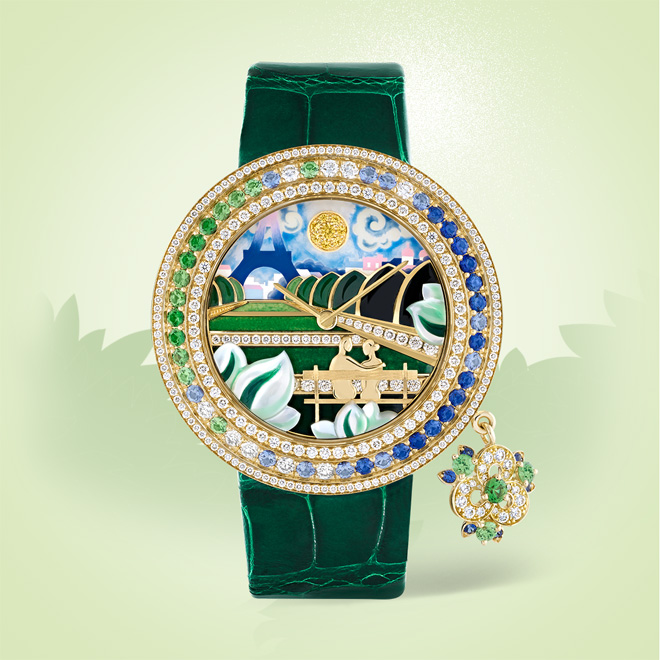 This 38mm watch in yellow gold symbolizes the love that unites the two characters. Sculpted in yellow gold, they are admiring the springtime gardens of the Champs de Mars together. The sun – set with yellow sapphires – shines on an Eiffel Tower in miniature painting. 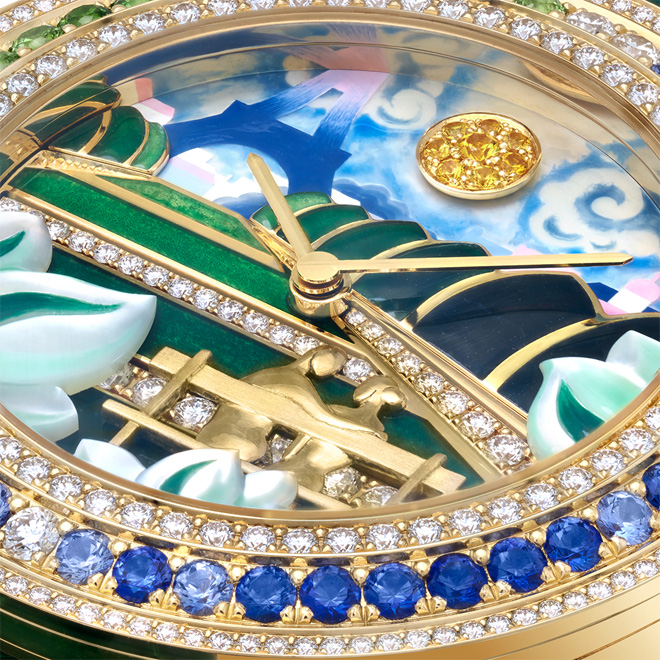 Champlevé enamel in different tones of green suffuses the scene with a sense of depth, with carved and painted mother-of-pearl providing a relief effect to the flowers that bloom in the foreground. A gradation of blue sapphires and tsavorite garnets adds the finishing touch, accentuating the spring-like freshness of this tender assignation.