A Knight Frank report cites: The Australia property market is expected to soften in the next quarter but that does not make it one of the world’s most sought-after destinations to invest in properties, particularly Sydney and Melbourne, where the former offers two prime property gems – One Sydney Harbour and Crown Residences at One Barangaroo. A Q3 2019 Knight Frank report revealed: Australia’s five major cities ranked in the top 18 of the most liveable cities in the world in 2019. Melbourne was highest in 2nd place, followed by Sydney (3rd, up to two places), Adelaide (10th, stable), Perth (14th, down from 12th) and Brisbane (18th, up from 22nd place). The Economist Intelligence Unit based analysis on the stability, health care, environment, education and infrastructure across the 140 global cities. 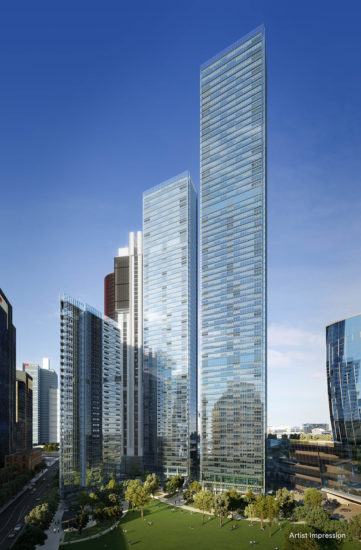 “When the coalition gained power in late May 2019, the housing market’s positive sentiment rose. Shortly, this was segued by two consecutive 25 bps cuts to the official cash rate in June and July – both times this was passed on by most mortgage lenders, now operating in a relaxed, but responsible lending environment,” says Michelle Cielsielski, Director, Residential Research, Knight Frank Australia.

In July 2019, the nation witnessed the first of lower taxes kicking in for low to middle-income earners. Gross rental yields were up 10 bps to 3.4 per cent for houses but remained steady at 4 per cent for apartments over the June 2019 quarter. In Sydney, New South Wales (NSW) economic growth was up 3.4 per cent in 2018 with a similar prediction of 3.4 per cent in 2022.

A November 2019 report from Jones Lang Laselle reveals: “Confidence in the existing Sydney housing market continues to improve, but conditions remain tough for developers.” The report also adds that Sydney’s existing dwelling prices will continue to rebound. A series of interest rate cuts, as well as fear of missing out as prices recover, has encouraged more buyers into the existing housing market, which has returned prices to positive growth. Despite a decline in transactions, market sentiment has improved, which is supported by increased auction clearance rates in the existing housing market. Record low-interest rates and easing credit conditions will also continue to draw more buyers into the market over medium-term suggesting that demand has passed a trough. Nevertheless, as vendor confidence improves, more properties will be listed, which may see auction clearance rates moderate. In fact, since the trough, house prices have grown 5.5 per cent and apartments 4.9 per cent to now both be only slightly below their 2017 peaks. However, price growth is likely to moderate as more supply enters the market on the back of improved vendor confidence and listing growth.

Renzo Piano is no stranger to the architecture world and when he was commissioned to design One Sydney Harbour, he took to the project like fish to water. His latest creation around the Sydney Harbour is One Sydney Harbour – a gleaming, modernist project consisting of three buildings positioned right next to the Crown Casino Tower in Barangaroo. The Pritzker Prize-winning architect has designed eminent building such as The Shard, The New York Times building, to name a few. Unique to the architecture is how this elegant building will reflect and shimmer the sparkling water of Sydney Harbour while embracing its iconic surrounding landscape. Piano’s Midas Touch ensures that each building will have unique treatments where different levels of reflectivity can be seen at different times of the day, akin to a shimmery crystal when it catches the light. The views to the north are most inspiring as one can witness Harbour Bridge and Opera House, as well as views west across Darling Harbour and to the Blue Mountains. 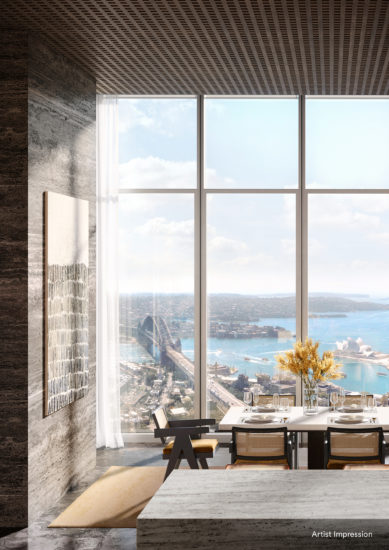 The dining area of a unit

The flagship penthouse is a single residence but allows an additional third floor – which forms part of the overall home – to function as a separate residence. The entire unit spans the top three floors of One Sydney Harbour’s three luxury residential towers. At 17,000 square feet of space, this penthouse offers nine bedrooms where residents will gawk at the 8-metre high ceilings.  It features a private roof-top pool, spa and gymnasium, as well as a very generous master bedroom.

“We’ve been overwhelmed by the interest we’ve received. Not only have we secured

more than $140 million with the penthouse sale, but a further seven whole floor

apartments have been sold, proving there is significant depth in the super luxury

The tallest of the three structures in the One Sydney Harbour development stands at 247 metres and will be the tallest residential building in the entire city. The second tower and third tower will be 207 metres and 104 metres high, respectively. The property has nearby new Barangaroo station precinct as part of the Sydney Metro; other public transport routes are also available. Future residents can enjoy world-class waterfront dining options simply by venturing downstairs. There are also nearby parklands (i.e. Barangaroo Reserve and Hickson Park – a one-hectare green link across Barangaroo South) for residents to enjoy a lush respite during the mornings or evenings. This is complemented by a selection of boutique stores to elevate the lifestyle experience. Not to be missed is Waterman’s Cove which is an amphitheatre-style boardwalk on the water. https://www.onesydneyharbour.com

Crown Residences at One Barangaroo

Crown Residences at One Barangaroo’s proposition of looking at enviable views of Sydney Harbour is enough for one to consider this prestigious investment. The captivating architecture is designed by the genius WilkinsonEyre Architects, allowing units to take in the stunning panoramic views. 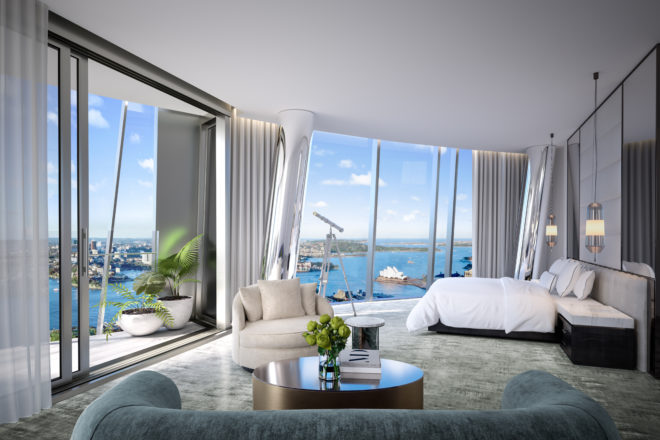 Penthouse master bedroom at Crown Residences at One Barangaroo

On the other hand, the interiors are designed by the preeminent New York-based Meyer Davis Studio Interiors. The beautiful interiors offer a tapestry of contemporary aesthetics and modern materials and finishes that have a sophisticated palette. The interior design emanates warmth as it offers contemporary and luxurious design elements such as European oak timber floors, ripple textured bronze glass, polished stainless steel, and stunning veined marble slabs.

This alluring waterfront property is a masterpiece that not only embellishes the Sydney skyline but is instantly recognisable from any vantage point in Sydney. From ground to apex, this striking building offers 71 storeys where 82 private residences (i.e. homeowners can choose: Homeowners can choose from two-, three-, four-, and six-bedroom configurations, or the top-of-the-line is the Duplex Penthouse) sit atop 349, six-star Crown Resorts hotel rooms. The building’s three twisting petals rise to the sky maximising the view lines from each residence to the Sydney Harbour Bridge, the iconic Opera House and beyond. A fortunate few will have a choice of two-, three- or four-bedroom residences, or indulge in the single 6-bedroom Duplex Penthouse. The development offers modern amenities such as in-residence dining where meals are ordered from the integrated six-star hotel. However, you can also head to one of the handpicked restaurants situated within the building. There is also a state-of-the-art gym for a workout or pamper yourself in the Blainey North-designed spa. Just within the vicinity of the property are eateries and lifestyle shops to sate the whims of future homeowners. With beaches and countryside walks to partake during the weekends, it’s no wonder that Sydney snagged two accolades last year: it was ranked 5th as “Most Liveable Cities” by the Economist Intelligence Unit and 11th on Knight Frank’s “City Wealth Index”. 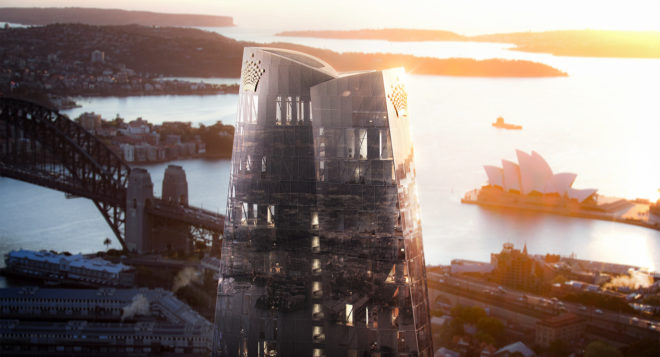 Skyline tower of Crown Residences at One Barangaroo

One Barangaroo’s easy access to the CBD is just a few minutes’ walk and the spanking-new ferry terminal in Sydney is another means of transport. The project is definitely Sydney’s most exciting waterfront and city living project. Its vantage location, coupled with the calibre of the developer, Crown Resorts, suggests this prestigious property is a once-in-a-lifetime opportunity.

Read more about Crown Residences at One Barangaroo here.