Maybe it’s all the talk of the upcoming Top Gun movie sequel, but several yacht builders have recently been gripped by the need for speed. A diverse collection of seriously quick motor yachts has defined a small but significant trend in the last couple of years, which flies in the face of the overall move towards yachts of greater size, volume, economy and range, rather than power. 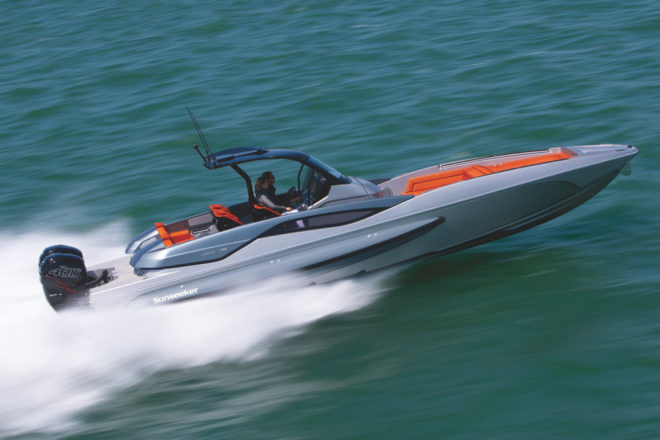 Both Sunseeker and Fairline staged the world premieres of their fastest – and smallest – models at this year’s Cannes Yachting Festival, a year after fellow British builder Princess unveiled its smallest and fastest at the same event. And all three models are a significant departure from their respective brands’ other designs.

Powered by two Mercury 400R V6 outboards, Sunseeker’s first Hawk 38 tops 62 knots and is the Poole shipyard’s fastest boat by some distance. It’s also its smallest model by quite a margin, 12ft shorter than the Predator 50 and almost a quarter of its weight.

Already, Sunseeker is contemplating how fitting the new Mercury 450R V8 outboards or even more powerful engines in the future could add a few knots, so challenging the 65-knot top speed of the yard’s fastest-ever knot, the XS 2000 racing boat.

Fairline’s F//Line 33, the yard’s latest design by Italian Alberto Mancini, is about 13ft shorter than the builder’s Targa 45 Open, so another big shift in design. 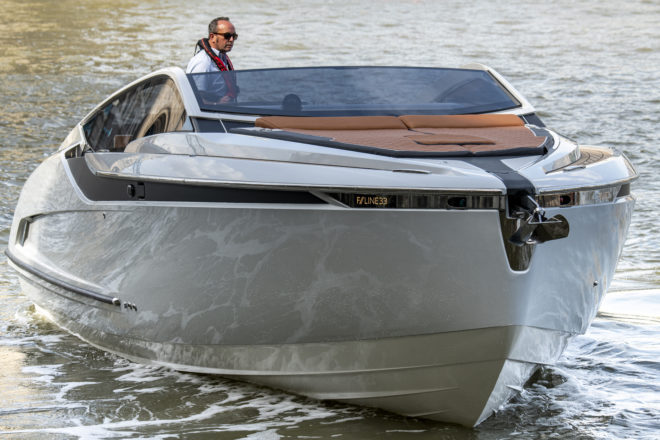 Fairline expects most clients to choose one of the twin 430hp V8 petrol options, either Volvo Penta or Mercruiser, which have already delivered more than the expected 45 knots, while 33 knots is predicted with the two other Volvo Penta options, twin V6-240 petrol or D3-220 diesels.

Princess’s elegant R35, unveiled with great fanfare at Cannes last September, was the first of the British trio out of the blocks and is listed as reaching 50 knots with its Active Foil System, which was developed with Ben Ainslie Racing Technologies, while Italian car design firm Pininfarina oversaw the styling in its first yacht project.

Hunton, which specialises in luxury performance yachts and tenders, expects to unleash its H55 in 2020, predicting a top speed of 55 knots with twin Man V8-1,000 engines and Arneson ASD11 drives. 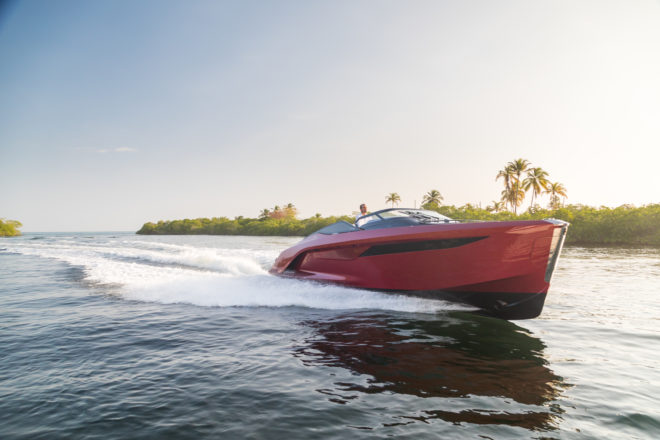 There’s certainly a notable trend among the leading British yards, according to Sean Robertson, Sunseeker’s Sales Director. Robertson has been with the company since 1986 and says it’s “almost doing a bit of a circle back” with the Hawk 38 as the iconic builder targets a new generation.

“We’re seeing a change in that we’ve now got sons and daughters – even grandchildren – of our clients starting to look at boating. In the Med in the last three to four years, I’ve seen money suddenly going into properties and new boats. There has almost been a reset in the market, with a new, affluent group of boaters coming through,” Robertson says.

“They’re buying a holiday property and a boat, and want to do the same things their parents did, like go to a favourite bay, beach or restaurant, but they want to get there in speed and comfort, and do it in something that looks different.

“The Hawk starts that journey again. It’s easy to use, the  side tubes act as fenders, so people just jump on and get there quickly. They might go to the beach and restaurant, play on the Seabobs and paddleboards, come back to the boat for a sunbathe and a drink, shower off, and then head to the next location or home. The Hawk gives you style and speed, and gets noticed.

“As for the other [British] builders, everybody’s gone a different way in terms of design, but I think they’ve all looked at client demands and done similar market research.”

FLIERS FROM POLAND AND THE UAE

Sunreef entered the performance market last year when it launched its first day cruiser with the eye-catching 40 Open Power, staging the world premiere of hull one at the Dubai International Boat Show and showing it in Singapore a month later. 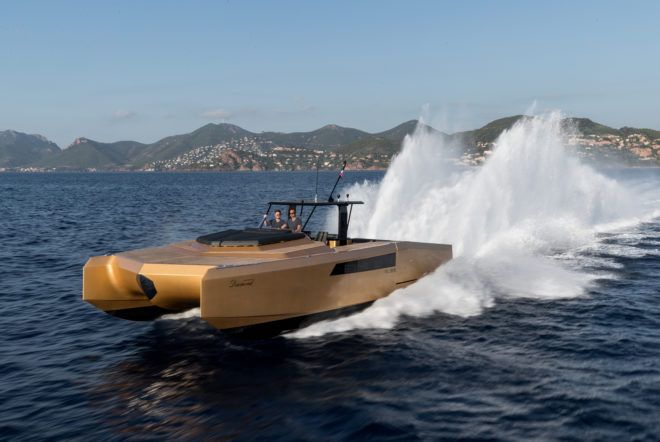 The Polish catamaran builder then released its fastest-ever boat with hull two, the pimped-up Diamond Limited Edition that exhibited at Cannes last September.

This second hull not only featured a diamond-encrusted coating and a cabin instead of foredeck seating but was also armed with twin 860hp Mercury Racing engines that fast became two of the stars of the show when revved up, and have generated a top speed of 56 knots.

Francis Lapp, founder and CEO of Sunreef, said: “We didn’t  see many fast luxury multihull dayboats, so the idea was to have a speedy dayboat but with all the multihull benefits such as a massive beam and space, excellent stability and a shallow draft, as well as the fold-down bulwark platforms. It provides a great platform for day cruising and socialising.

“Speed is important as it can spice up the cruising experience. Cruising at full speed is a real thrill and the Mercury Racing engines produce an incredible sound. However, the 40 is an exception, as most of our range consists of large, voluminous yachts. This may be a trend among other yards.” 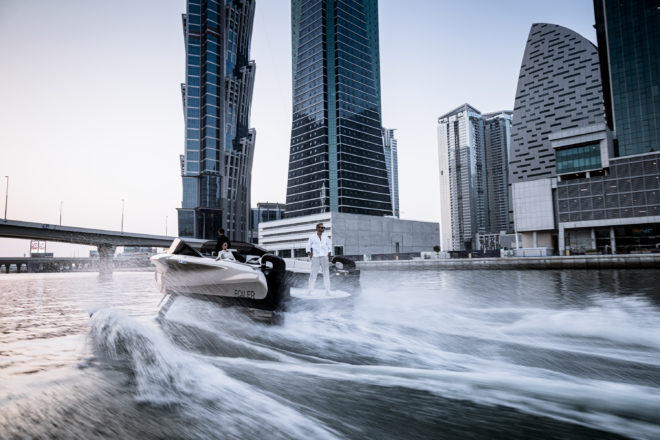 Built by Enata in the UAE, the 40-knot Foiler has been billed as ‘The Flying Yacht’ due to four foils that lift it up to 1.5m above the water, providing great stability

UAE-based builder Enata has released a new 2020 version of its remarkable Foiler, a model that has been promoted as ‘The Flying Yacht’ since its world premiere at last year’s Dubai show and is another remarkable example of the new trend for powerful dayboats with distinctive designs.

The updated version features a joystick option alongside the traditional wheel and throttle, while the hybrid propulsion has been replaced with a more efficient hydraulic propulsion, powered by twin 370hp V8 marine diesel engines that help the boat soar up to 40 knots.

The Foiler was primarily designed to offer as smooth a ride as possible, with its four external foils raising the yacht up to 1.5m above the water as it reaches 18 knots.

Alois Vieujot, Manager at Enata, said: “The Foiler is the world’s first flying yacht. The four hydrofoils are like wings in the water and it’s the ultimate experience of flying above the water, especially at high speeds. The joystick is extremely intuitive and easy to use, and it’s magical seeing the ocean pass below you at high speeds.

“The foils reduce slamming and roll, so 40 knots is possible even with 1.5-2m waves, although top speed isn’t the focus. Instead, clients purchase the Foiler for its comfort, stability, reduced fuel consumption and reduced noise.”

Pershing kicked off 2019 at Boot Dusseldorf with the world premiere of the 8X, which was joined at this year’s Cannes Yachting Festival by the Pershing 9X, 70 and 108. The 8X is the brand’s new fastest yacht and in contrast to others covered here, the 83-footer would never be classified as a dayboat, with four cabins and an unladen displacement of 57 tonnes. The 83ft, four-cabin Pershing 8X launched this year is the Ferretti Group’s fastest yacht, hitting 48 knots with the option of twin 2,638hp MTUs

Pershing’s flagship 140, for a Hong Kong owner, is the brand’s other remarkable release this year and also worth mentioning in any tribute to power and performance. Fitted with four 2,600hp MTUs, the 140-footer can reach 38 knots, a remarkable figure considering the size of this 43.3m superyacht.

Riva, also a Ferretti Group brand, added another fast boat to its range last year with the world premiere at Cannes of the 66’ Ribelle, which hits 37 knots with two 1,550hp MAN V12 engines.

The 66’ is among several Rivas at Cannes this year, but the latest addition to the Sportfly series is not the brand’s fastest yacht. From the Open range, the 27ft Iseo, 33ft Aquariva Super and 63’ Virtus all top 40 knots. 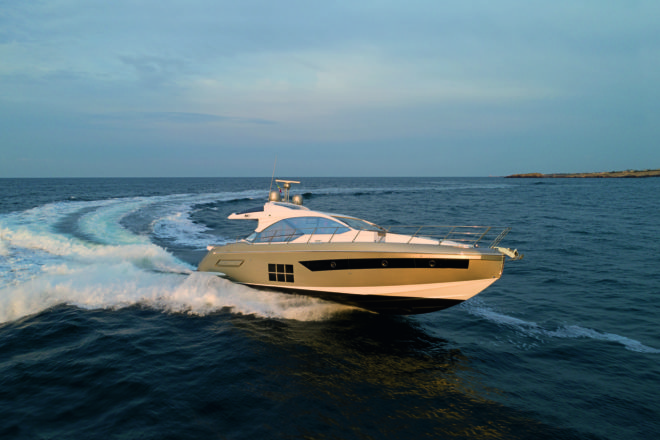 Azimut, meanwhile, released its two fastest models in the last two editions of the Cannes show. Last year marked the world premiere of the 35-knot S6, a model recently delivered to Taiwan and powered by three 550hp Volvo IPS700s.

However, the 59-footer is not quite as fast as its big sister, the S7, which is 70ft long and more than 50 per cent heavier but reaches 36 knots with triple 800mhp Volvo Penta IPS1050 diesels.

Meanwhile, a range of rapid ribs, maxi-ribs and tenders are being unveiled at both Cannes and the Monaco Yacht Show, and in the coming months. 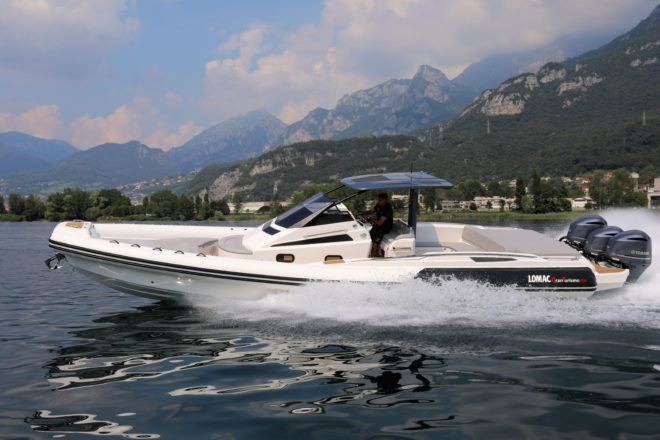 Lomac’s Grantismo 12.0, which showed at Cannes, has a top speed of 57 knots with three 300hp Yamahas

Cannes is the stage for the world premiere of Lomac’s Granturismo 12.0, a Federico Fiorentino design that has a top speed of 57 knots with three 300hp Yamahas. It even has a cabin containing a double bed and separate bathroom with rear access.

The new 12m yacht was on display in Cannes with Lomac’s Granturismo 10.5, Granturismo 14.0 and Adrenalina 10.5 maxi-rib, which itself does 50 knots.

Greece’s Onda Tenders is showcasing its new 331 Gran Turismo at both Cannes and Monaco, and said the open tender can reach 60 knots with just a pair of 250hp outboards, while inboards are also an option.

Designed in collaboration with Sweden’s Mannerfelt Design Team, which has extensive experience in the offshore racing world, the boat features a two-step, deep-V hull and uses vinyl ester and foam core composite technology. 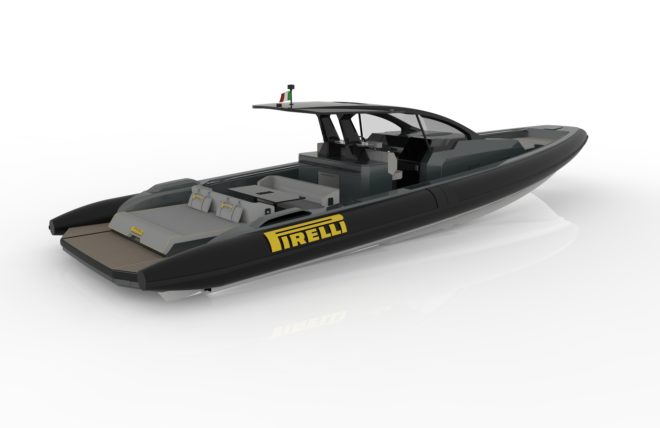 The Pirelli 1250 will be unveiled in January

Mannerfelt is also behind the Pirelli 1250, an innovative walk-around built by Italy’s TecnoRib that will be unveiled at Boot Dusseldorf in January 2020 and is expected to reach 45 knots with two 400hp Volvo Pentas. The smaller 1100 model tops 45 knots, while the 1400 and flagship 1900 – which was unveiled at Cannes in 2017 – are the largest, fastest Pirelli speedboats, both topping 50 knots.

Finally, it’s back to Greece for what looks set to be the fastest yacht mentioned in this article, the 38 Grand Sport by specialist rib builder Technohull, which announced that pre-production models clocked 103 knots in testing. 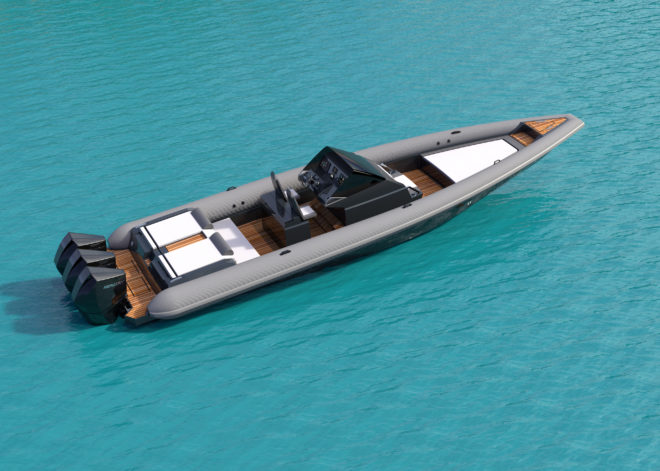 The 11.6m rib with a 3.1m beam features Technohull’s patented Dynastream hull and a sharp semi wave-piercing bow. Power options on its notched transom include two Mercury Verado outboards, ranging from 300-450hp, or the three 450hp motors in the super sport version.

If you need a lie down, and there’s good reason to think you would, there’s a sunpad at the bow and twin loungers aft, as well as an electric toilet and external shower.

Unfortunately for visitors to September’s shows in Cannes, Southampton, Genoa and Monaco, the 38GS is set to miss the main boat show season in Europe as it’s only expected to launch in October.

Anyway, that gives you something to look forward to, along with the return of Maverick, if you feel the need.