On the eve of Singapore Formula 1 Grand Prix, TAG Heuer kicked off 2019’s highly anticipated race with an electrifying party at the country’s iconic Silver Leaf at the Gardens by the Bay. Graced by Thor himself, Australian actor Chris Hemsworth, and TAG Heuer Ambassador, and Dutch Aston Martin Red Bull Racing Formula 1 driver, Max Verstappen, around 200 guests including business partners, customers and members of the media attended TAG Heuer’s F1 party amidst a backdrop of the stunningly futuristic Flower Dome and Marina Bay skyline.

12 years on, the world’s first Formula 1 Night Race is emblematic of Singapore’s racing ambitions. A long drought followed the heady days of Singapore’s first Grand Prix at the Thomson Road circuit, held as part of a series of sporting events organised in support of the government-sponsored “Visit Singapore – The Orient Year” 1961 tourism campaign. The 1960s were problematic with so many brands sourcing their dials and movements from the same suppliers, as a result, the industry had suffered creatively and Heuer (before TAG acquisition) pivoted to the complication they knew best – chronographs. Heuer began to dominate the 60s with a series of classic and modern chronographs, with design features that would feature on Heuer chronographs to its contemporary history – The Autavia and Carrera were doing well and the Camaro was introduced just in case there was a market for a tonneau shaped Heuer chronograph. 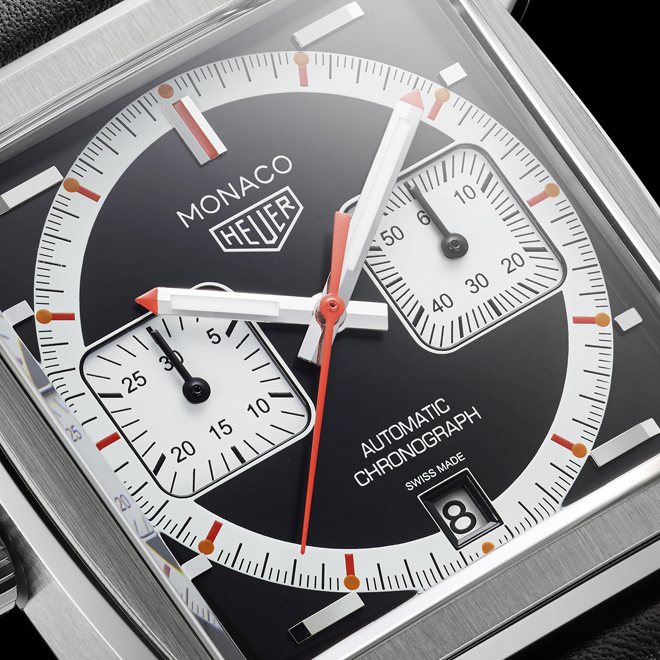 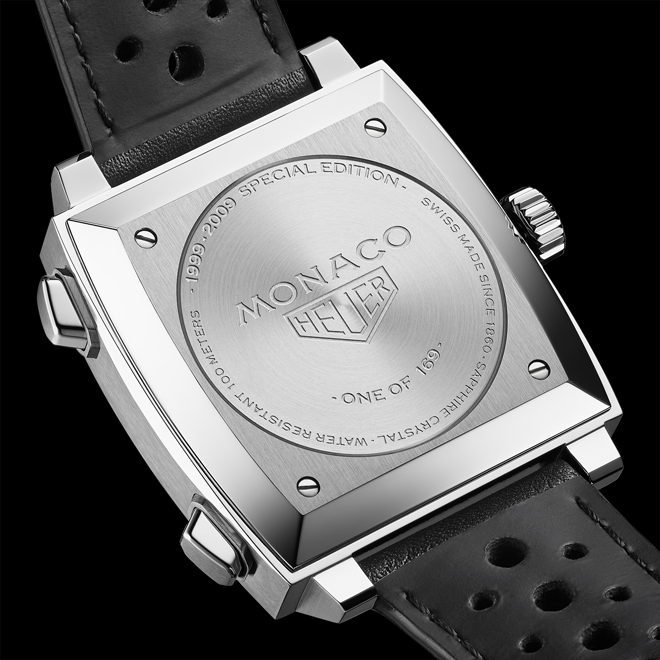 When the Heuer Monaco, the world’s first square chronograph, was introduced at simultaneous press conferences in New York and Geneva on 3 March 1969, journalists and watch aficionados around the world were amazed with its iconic design and never-before-seen water-resistant square case; but oddly, and much like the Singapore Grand Prix which was discontinued in 1974,  the Heuer Monaco Chronograph was discontinued in 1975.

Time plus cultural appeal, divided by nostalgia, make for potent combination – eventually, the Monaco Chronograph, immortalised by Steve McQueen in 1971’s Le Mans, and with his untimely demise, his legend lived on in films stills of McQueen wearing his Monaco culminating in its triumphant return in 1998 as a limited edition re-issue (before historical re-issues became a thing) and then finally remained as a serial production model. Analogously, the return of the Singapore Grand Prix shares a similar “phoenix rising” moment, returning stronger and more glamorously than ever before. 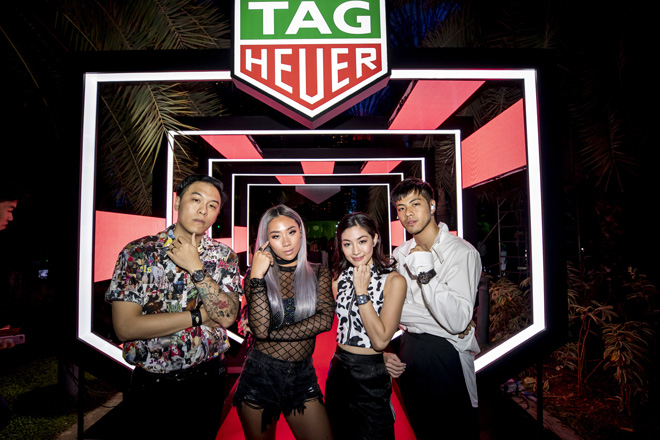 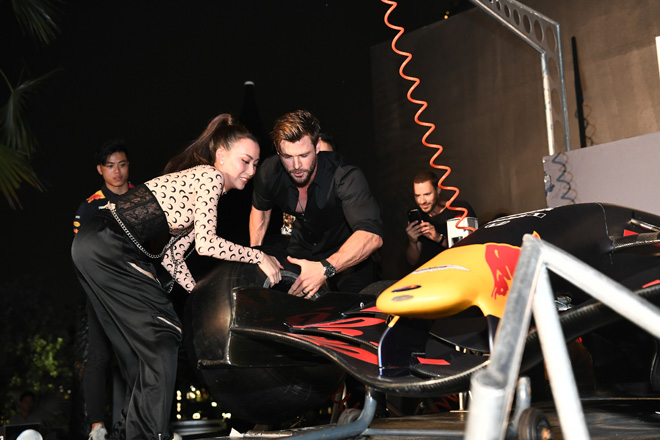 Joseph Schooling and Max Verstappen attempting to change the tires

An 8-metre-long tunnel entrance lit up by TAG Heuer accents of red and green LED lights, welcomed the guests as they were entertained by one of Singapore’s leading bands, The Sam Willows. Incidentally, the band’s lead guitarist, Jon Chua, is a friend of the brand in Singapore alongside Rozz Lee, host of the event.

“The Formula 1 season is upon us here in Singapore, and for TAG Heuer it means we celebrate the great partnership we have with Aston Martin Red Bull Racing Formula 1 — and more widely motorsport and performance which are so deeply rooted in our brand DNA.” – Amelia Sillard, Vice-President of TAG Heuer South-East Asia and Australia 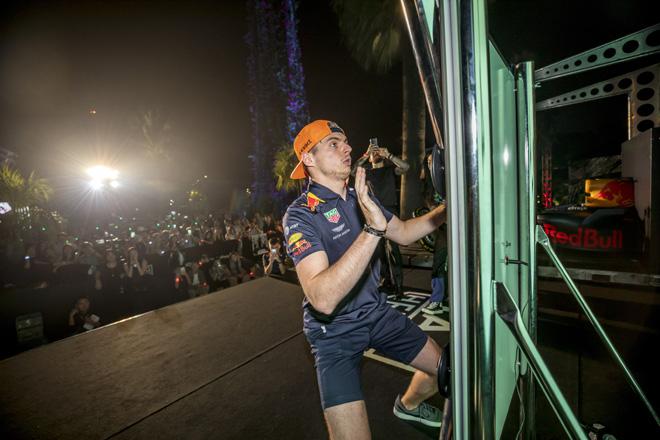 The Batak Challenge between Chris Hemsworth and Max Verstappen 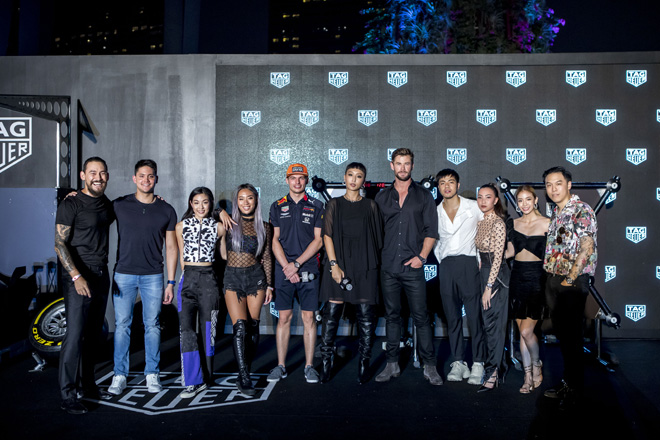 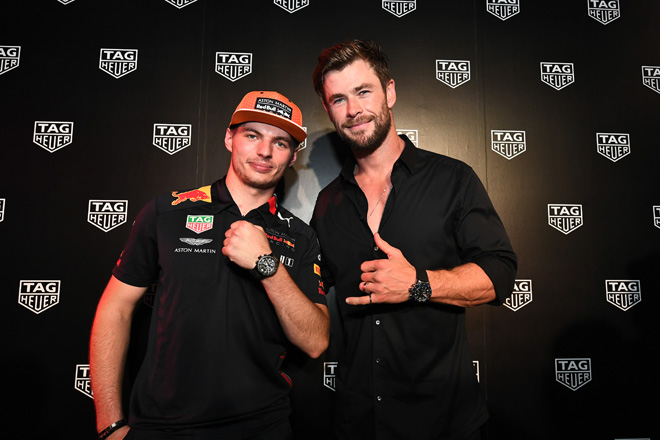 Indeed, TAG Heuer’s rich heritage with motorsports is the wellspring from which the La Chaux de Fonds manufacture can draw upon and Monaco, home to one of the most important and prestigious legs of the Formula 1 season, has as been called “an exceptional location of glamour and prestige”, much like Singapore is becoming after hosting the Night Race for over a decade. 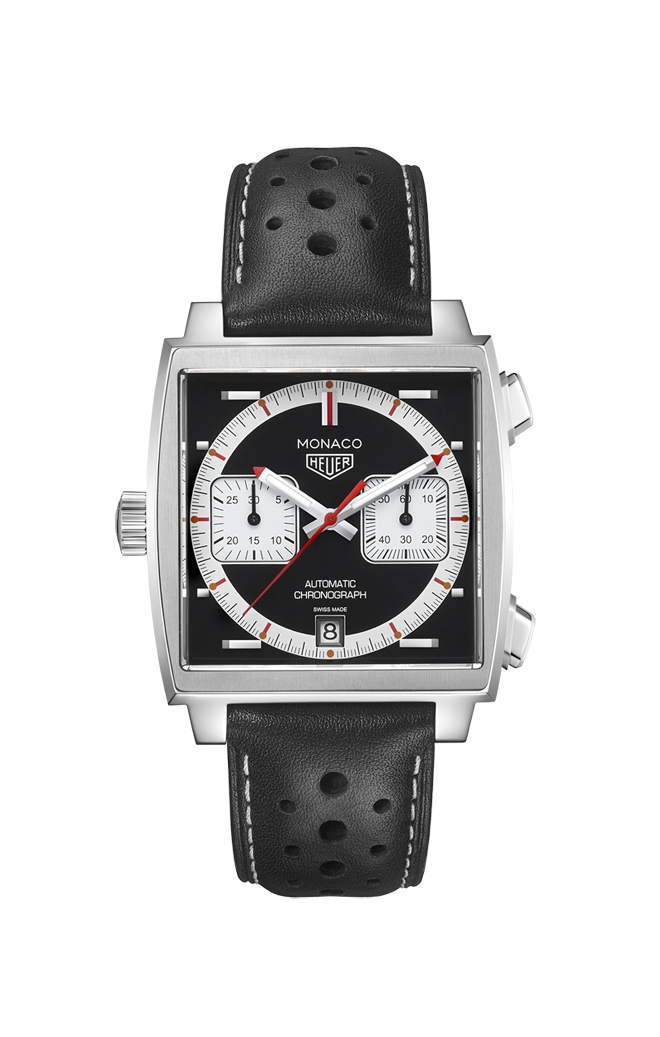 The fourth wristwatch in the Monaco Through Time line-up is a special collector’s edition with a classic black and white appearance – in short – We finally get a Monaco “Panda” racing chronograph decades after its Autavia and Carrera chronograph cousins have had their Panda racing chronographs. The white opaline seconds sub-dial and chronograph minutes counter of the fourth of five limited edition TAG Heuer Monaco chronographs stand out from the pitch-black background. Striking red and orange touches serve as stylish hour markers and the hour and minute hands and facetted applied indexes are filled with Superluminova for improved legibility. Hope against hope, perhaps there will be a racing chronograph named for Singapore.