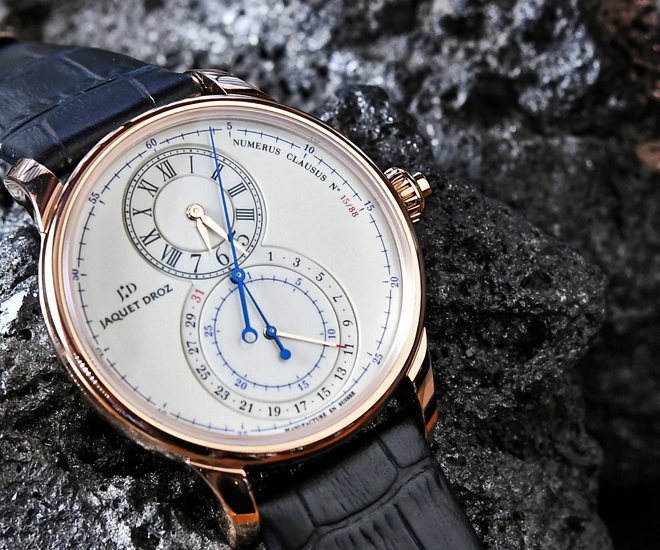 Jaquet Droz presents an interesting spin on the chronograph, which has been dominated in recent years by various functional sports executions. While one might recall the chronograph in the SW collection – unsurprising given how distinctive it is – this only emphasised the opportunity for a dressy version of the complication to shine. Aesthetically, the Grande Seconde bears all the codes that make Jaquet Droz a paragon of dressy-but-quirky watches. Specifically, the proportions of the visual elements on the dial offer interesting possibilities. On the other hand, the figure-of-eight configuration, which is sometimes presented in a delightfully asymmetrical style, really should not be disrupted.

Given this context, it must have been quite challenging to integrate the chronograph into the Grande Seconde collection in an elegant fashion that maintained a certain degree of functional clarity. Looking at standard bi-compax or tri-compax styles as references, the lazy option would have been to add a second horizontal figure-of-eight. The La Chaux-de-Fonds firm went in a different direction, throwing in a date indicator just to show that it can. The Jaquet Droz Grande Seconde Chronograph offers no less than two variations, both of which preserve and enhance the distinctive look-and-feel of the brand’s watches. Material concerns aside, these variations actually feature both the symmetrical and asymmetrical versions of the aforementioned figure-of-eight style, with the monopusher crown also shifting to match (3 o’clock and 4 o’clock). 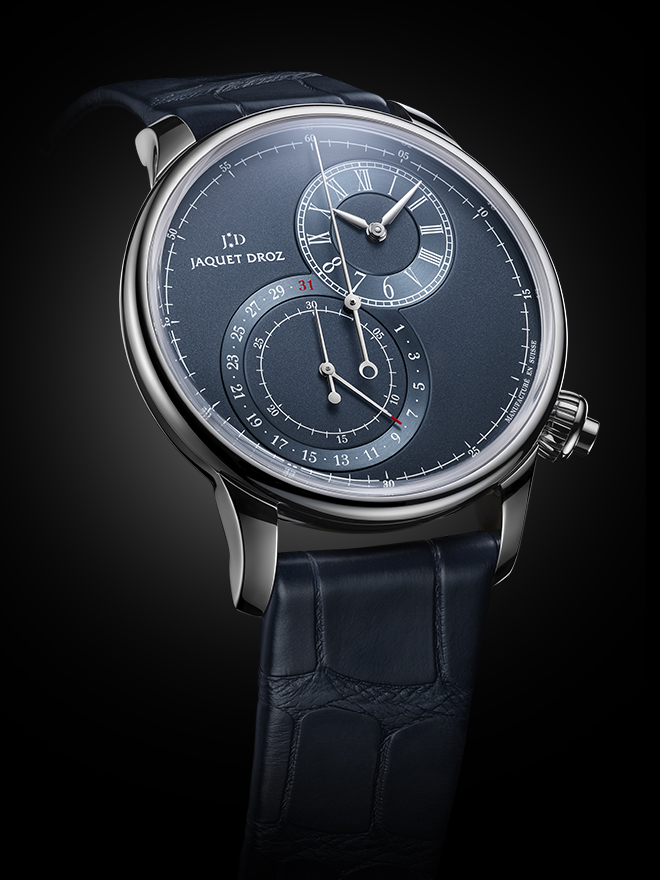 Practically speaking, this means the start-stop-reset functions of the chronograph are all controlled via a single pusher, which shares the same space as generously sized grooved crown. Similarly, the 30-minute subsidiary chronograph counter shares the same space as the date indicator (at 6 o’clock in the red gold limited edition and 7 o’clock in the regular steel series). So where are the chronograph second hand and the running seconds? Unusually for a watch called Grande Seconde, there is no running seconds indicator, with the central sweep second hand functioning as the chronograph second hand instead. While there is no impact to this on the level of aesthetics, it is certainly a bold and quirky choice.

As previously mentioned, there are two versions of the 43mm Jaquet Droz Grande Seconde Chronograph: a limited edition of 88 pieces in red gold, and a regular production version in steel, of which there are three dial variants. The red gold watch sports the Grand Feu enamel dial that is the stock in trade of Jaquet Droz, but the steel variants also have interesting dial treatments. Offered in silver, blue or taupe grey, these are all reportedly finished by hand via a dry sandblasting technique (new to the Grande Seconde collection); the grey and blue tones are entirely new for Jaquet Droz. Also new here is the automatic column wheel actuated chronograph calibre 26M5R with vertical clutch; as usual this has been produced for Jaquet Droz by Blancpain.

Case 43mm in steel or red gold; water-resistant to 30m