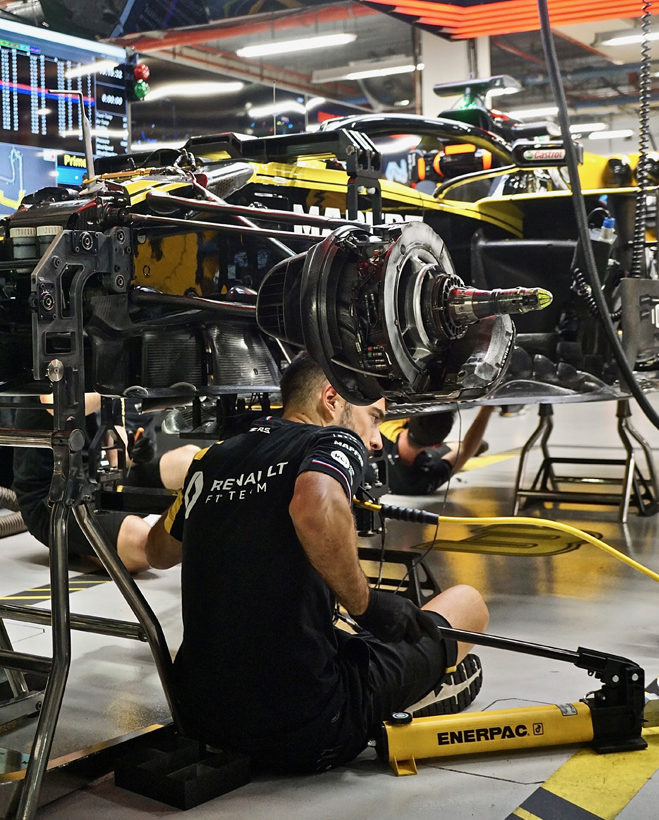 Luxuo was given an inside tour of the Renault F1 garage courtesy of Rolex. Photo: Jonathan Ho

Formula 1 races aren’t about the cars. Sure, the cars are important but just like in watches, the race cars are merely the end result of a symphony of hundreds and in some instances thousands of personnel, each working together on crucial components of the larger machinery much like wheels and cogs of a chronograph. Last evening Rolex took editors of Luxuo and World of Watches behind the scenes and into the race car garages of Singapore’s latest Formula 1 Grand Prix. On average, there are 1.25 kilometres of wiring and over 180 sensors sending up to 1000 inputs and readings to a Formula 1 car’s central processing unit each second and while the computing power of Formula 1 race cars have risen drastically in response to higher tempo races and performance extremes, the cars themselves have evolved to be simpler and simpler in terms of aerodynamism and engineering, to keep vehicles lightweight and easy to repair. 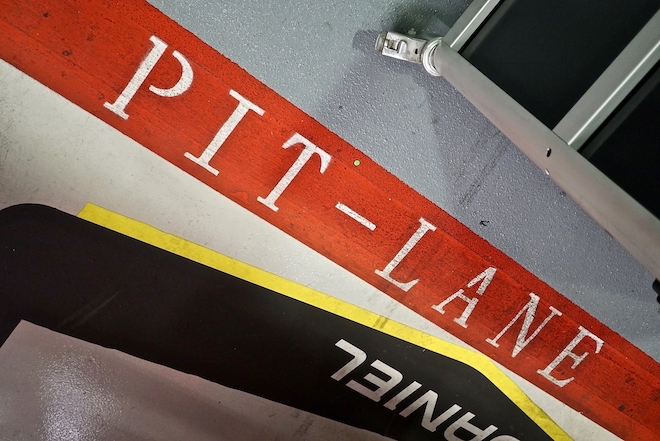 Day Two of Singapore’s famed Formula 1 Night Race was an evening of insights as Rolex took us on a Pit Walk in order to experience what really goes on behind the scenes of the world’s premier night race. Stopping at Renault’s garage, we were met by a guide who duly informed us that though the cars were built at Renault’s Enstone facility in the UK, with a support staff of over 700 administrative personnel, vehicle dynamicists, mechanics, structural engineers, stress analysts, material specialists and driver safety engineers (to name a few), in Singapore alone this night, at least 100 of the crew were present to ensure the efficient and successful completion of the technically arduous and materially exciting night race. 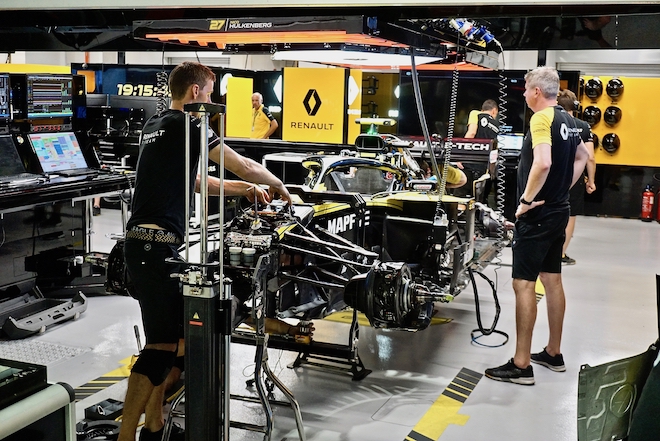 The flurry of activity on the garage floor with two Renault Race cars brought to mind the synchronised dance of construction and assembly reminiscent of Swiss watch manufactures. Other than ambient noise from high powered cooling fans and thronging VIPs around the pit floors, the Renault garage is actually fairly quiet. Engineers, technicians and mechanics all working on different aspects of the vehicle from frame to chassis, engine to transmission, all activity relying on highly skilled labour, a “factory” away from the Enstone factory.

These Formula 1 race cars represent automotive frontiers. The technology is cutting edge, the science is exquisite, right down to heat conservation systems from Infiniti which effectively re-channel as much energy resulting from engine or exhaust heat, even heat from braking, recycled into stored energy for use in capacitors around the vehicle. Formula 1 racing has come a long way from being merely driver-led, it is still driver led today but there’s an entire support staff to give him every advantage necessary. When Rolex birthed the Calibre 4130, it too practiced a little “min/maxing” – taking out as much as it improved

As our host takes us through the evolution of the vehicle, cutting weight by switching to carbon fibre and improving performance, essentially “min-maxing” – the practice of minimising everything possible and maximising the output of everything possible, I am reminded by that fundamental milestone in chronograph history over 30 years ago. Jackie Stewart, the legendary “Flying Scot” was at the Rolex paddock club with his gold GMT Master. Photo: Ruckdee Chotjinda

Rolex had just changed the “engine” of their Cosmograph Daytona from the manually wound Valjoux Caibre 72 movement, moving to a new supplier – Zenith. The modern history of Rolex’s Daytona chronograph began in the 80s with the legendary El Primero movement. But it wasn’t just shoe-horned in – like an F1 race team, the Geneva Manufacture heavily-modified the base calibre – removing the date complication and fitting a completely a new escapement with a much larger, free sprung Glucydur balance wheel, Microstella regulating screws for adjustment and, opting for a Breguet overcoil instead of a flat hairspring. Rolex’s new masterpiece with a column wheel and horizontal clutch was re-christened the 4030 calibre. Furthermore, the high frequency 36,600vph was down-paced to 28,800vph; nevertheless, it stood in stark contrast of the time when Rolex modified the Cal. 72 to beat at a more stable 21,600vph pace as opposed to the original 18,000vph. That engine remained in service from 1988 to 2000 when it was finally replaced by an all-new in-house chronograph calibre, the Cal. 4130. Instead of a lateral or horizontal clutch of its forebear 4030 movement, the new horological powerplant would adopt a vertical coupling system which eliminated the backlash on the seconds hand when the stopwatch function was paused. The result of five years of painstaking innovation and refinement, Rolex’s 4130 was revolutionary – it took out more while increasing performance where it mattered. The Geneva manufacture had “min-maxed” – with just 201 components, a 60% reduction on its predecessor Cal. 4030 and a crucial change of movement architecture – where the venerable chronograph used two separate mechanisms for controlling the minute and hour totaliser, the new Cal. 4130 would just use one singular module. The resulting space savings would then allow Rolex to boost running time from a commendable 50 hours to an impressive 72 hours. In July 2019, Red Bull Racing Team set a new F1 pit stop speed record at the German Grand Prix by replacing the wheels and sending a race car back to the competition in 1.88 seconds. Just like in Formula 1, reducing watch service times can mean everything to customer satisfaction – stripping down a Cal. 4130 requires only 12 screws, rather than 40 on its forebear. To third party watch repairers, the Calibre 4130 has earned somewhat of a reputation as the “watch repairer’s friend” because even its vertical clutch serviceable, easily disassembled, lubricated, and replaced ensuring its reliability, something that a rival manufacture has yet to replicate. The Caliber 4130, now fully internally developed and manufactured, the brand’s first new movement in 50 years represented a monumental milestone.

Renault F1’s operations can match the pace of Rolex’s own speed and expanse through its vertically integrated manufacturing – almost every car component, roughly 2,500 parts are custom-built by Renault at Enstone. The only thing made elsewhere are its Pirelli tires and case in point – Rolex makes its own bracelets.

To the average shopper, Rolex’s sponsorship of Formula 1 racing can be associated quite superficially to the glitz, glamour, and perhaps the racing associations with a Chronograph named for one of the world’s most famous race tracks; but dig deeper, one finds the symmetry in the cutting edge field of automotive racing and fine watchmaking. 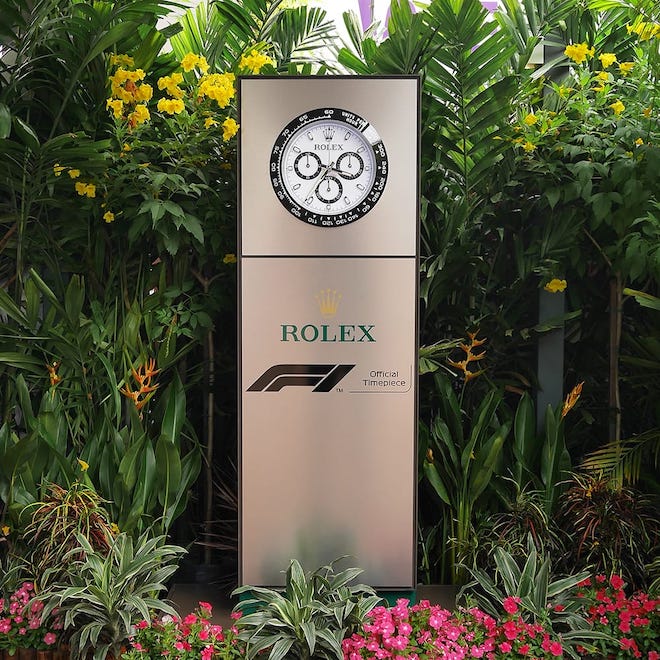