Rolex.org is Supporting Science and Conservation through Storytelling 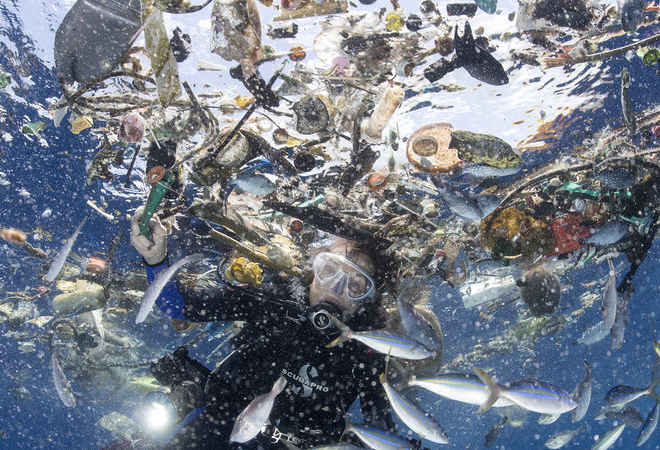 Dr. Sylvia Earle diving in a sea of plastics

According to EU initiative Fish Foward project, the average person eats 19.2kg of fish a year, double from 50 years ago. In 2013 around 93 million tonnes of fish were caught world-wide with 38.5 million tonnes of bycatch are wasted as a result  of current fishing practices and in just 40 years there has been a decrease recorded in marine species of 39%. It’s not just the 100s of millions of tonnes of ocean wildlife being extracted, it’s also the destruction of their habitats. And just as we take a lot out of the seas, we are adding as much junk into it.  Over 1 million marine animals (mammals, fish, sharks, turtles, and birds) are killed each year due to plastic debris in the ocean. It is estimated that there are 100 million tons of plastic in oceans currently and that conservative estimates look at us dumping another 60 billion pounds this year alone. In fact, research commissioned by the World Wide Fund for Nature (WWF) has found that on average, people could be ingesting as much as a credit card’s weight – in plastic each week.

We used to think the ocean was so big, so resilient that we could not harm it. In a few decades, we have disturbed basic planetary systems; they’re interwoven and we are now realizing what their real value is. Many people still don’t understand that protecting the ocean means that we’re protecting ourselves.” – Marine biologist Sylvia Earle, a Rolex Testimonee since 1982 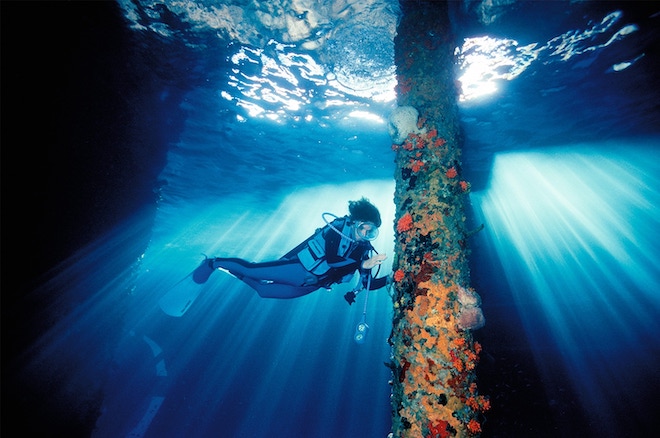 At the heart endeavours to keep the planet, perpetual, is Dr. Sylvia Earle’s Mission Blue team. Like a sort of environmentalist special forces, Dr. Earle and her team make expeditions to far flung exotic locales to shed light on vital ecosystems and foster support to safeguard them as protected areas. The esteemed Marine biologist calls these areas “Hope Spots” – special areas critical to the health of the ocean and the literal hope of the Earth. And while some of these Hope Spots are formally protected, others still need regulatory and national will to define and legislate this protection. 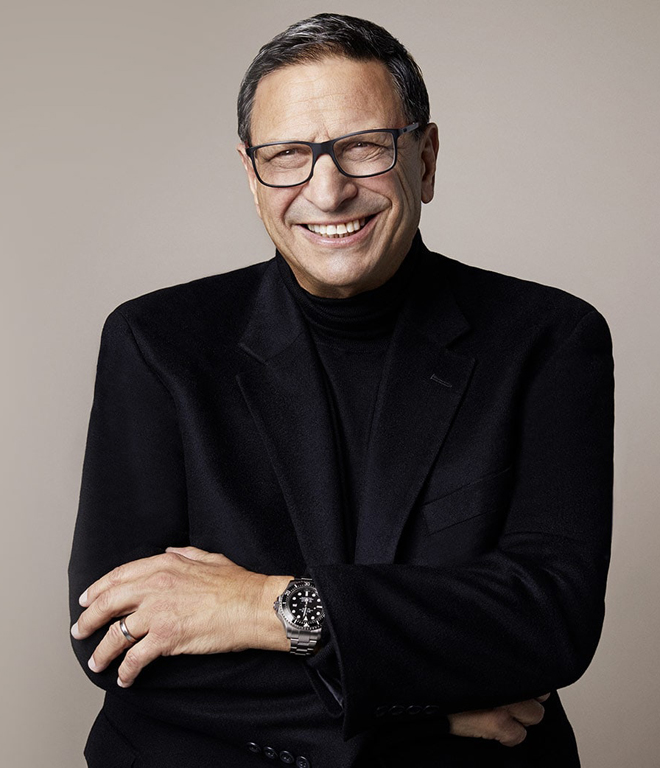 A Rolex Testimonee since 1994, David Doubilet is a pioneer and one of the best-known underwater photographers in the world. After publishing his first article in National Geographic in 1971, he swiftly gained recognition as one of the magazine’s top photographers. David Doubilet’s lens has captured all the waters of the planet. 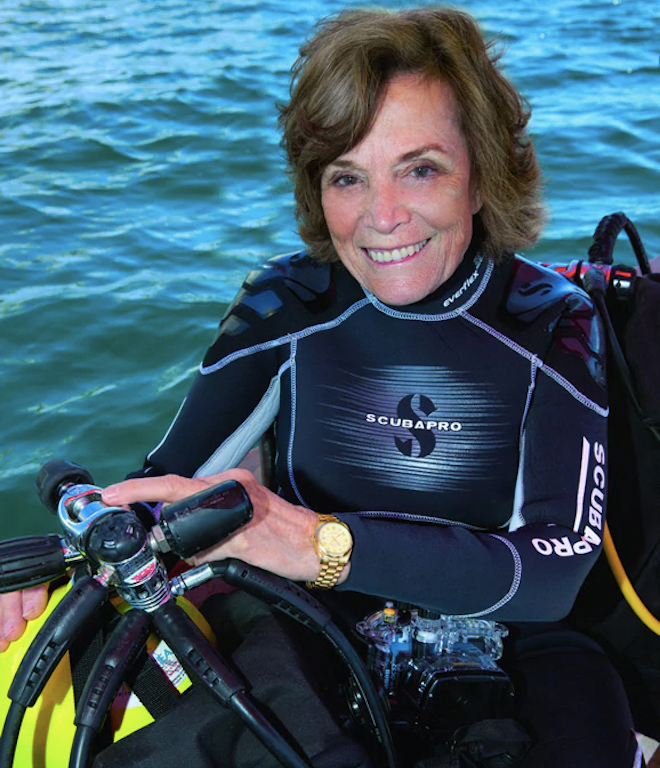 Sylvia Earle is an acclaimed American underwater explorer, marine biologist, aquanaut, lecturer, author and a National Geographic Society Explorer-in-Residence. For four decades, she has been a pioneer of deep ocean exploration and has remained at the forefront of research as a marine explorer.

Indeed, Dr. Earle shares that the rationale that Mission Blue’s remit is not just exploration, study and protection of the planet’s oceans but also to inspire the public at large to take action. For that to happen, the Perpetual Planet symposium invited fellow Rolex Testimonee, pioneering underwater photographer David Doubilet.

Doubilet has dedicated his life to capturing the drama, and poetry of life in our oceans. In fact, National Geographic’s most prolific and acclaimed photo-journalist noticed that sharing photo-editorials from our rapidly changing seas paint pictures both of hope and dire consequences of what we stand to lose if immediate remedial action is not taken. 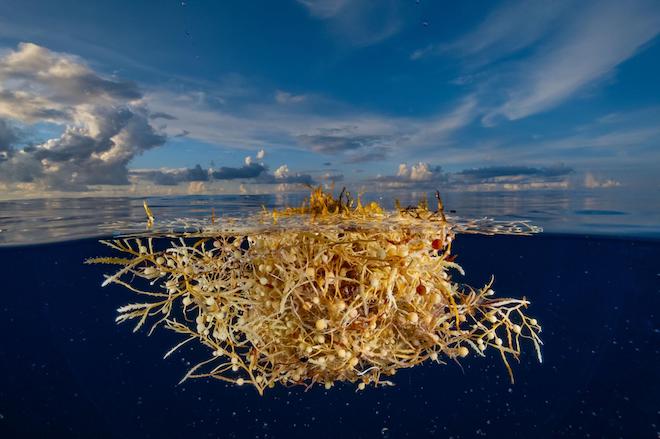 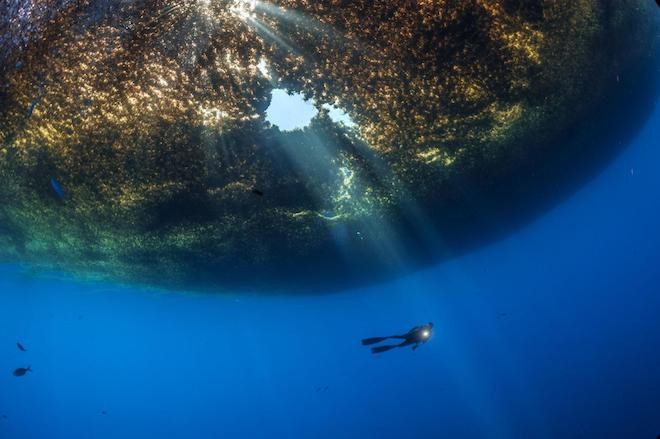 A diver’s air bubbles punch through the massive flotilla of Sargassum which formed due to warmer waters. Credit: David Doubilet for National Geographic

Standing on the shoulders of titans like Hans Hass and Jacques-Yves Cousteau, the infrastructure and technology simply didn’t exist for underwater photography back in the day – the initial challenge for Doubilet then was to develop a system of taking great underwater imagery using fairly “primitive” equipment. Once the technology had evolved sufficiently, Doubilet managed to capture more and more of the Earth’s cries for help. 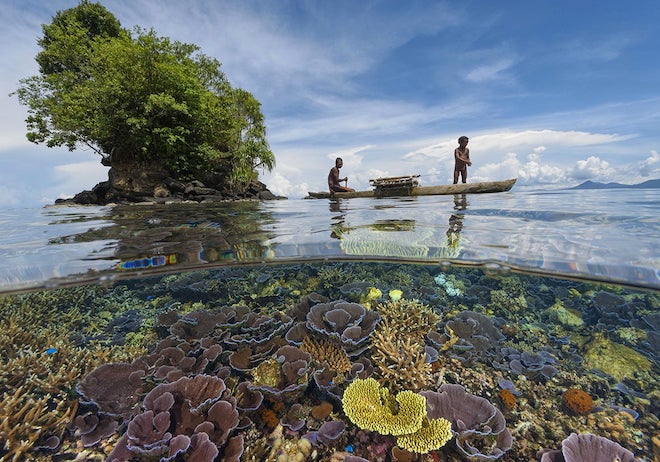 A father and son fisherman glide across a shallow garden of coral surrounding an island near the tip of a peninsula in Kimbe Bay, Papua New Guinea. On every assignment I constantly look for the perfect spot to make a half-and-half image that relates the surface to the hidden world below. This image captures the essence of Kimbe in a single frame: healthy coral and small islands surrounded by active volcanoes plunging to a sea that supports subsistence fishing. — David Doubilet 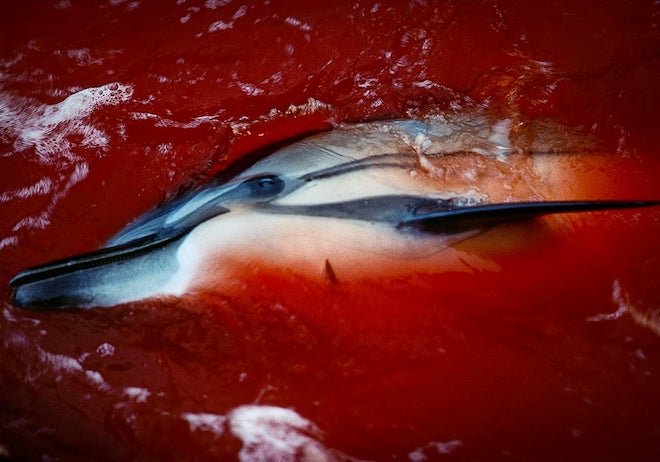 A dolphin surrenders to death in a sea of blood during the annual dolphin harvest in Futo, Japan. I was on assignment in Futo for another story when the fisherman herded a pod of dolphins into a small cove. They wanted me to leave, but I stayed and photographed as the fisherman grabbed each dolphin by its rostrum, slit their carotid artery and then let them go to bleed to death. The cries of the dolphins vibrated through the concrete dock and rose up through my feet. It was the one of the worst moments in the sea in my career. — David Doubilet

Dr. Earle reminds us that we’ve mapped more of Mars than we have of the oceans and we can be thankful that men like David Doubilet decided to take on stories that were less popular subjects but needed to be told, like the extinction of freshwater eels, goliath groupers, and the Sargasso Sea. Recounting the deleterious effects of climate change, Doubilet shared a personal anecdote where an overgrowth of sargassum weed, spurred on by warming waters, was threatening to choke amphibian life on the beaches along the Mexican coast.  According to National Geographic, people on Trinidad and other Caribbean islands have been forced to evacuate their homes because of the toxic hydrogen sulfide gas released by the rotting weed on beaches, threatening to undo education efforts on the natural benefits of the sea-weed to marine life in the region; a metaphor for the delicate balance that human activity seems to be upending because we simply haven’t considered all the implications and consequences of our actions. 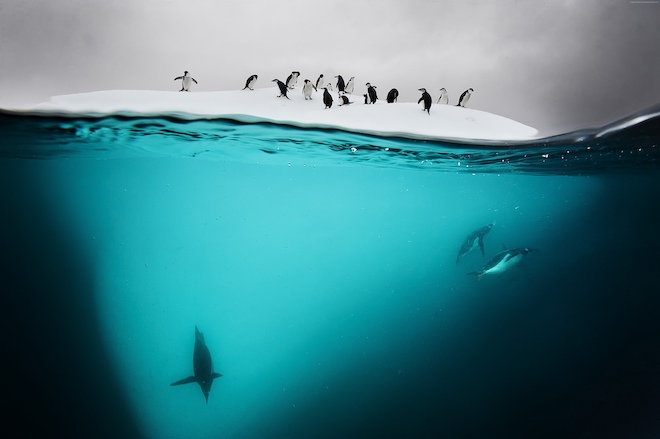 Chinstrap and gentoo penguins squabble and rest on a small island of ice called a bergy bit near Dank Island, Antarctica. The penguins were concerned I was a leopard seal circling their island waiting to eat them. I watched a chinstrap knock a gentoo into the water. When the penguin swam past me and climbed back onto the ice all of the penguins began to leap, swim, and circle the island in front of me. — David Doubilet

“Icebergs mesmerise me because they are a perfect metaphor for the sea: a small fraction visible to the naked eye,” says Doubilet as he recounts another photographic adventure to Greenland’s iceberg garden at Red Island in Scoresbysund Fjord. What he lensed cast harsh light on the ugly truth about glacial retreat and in the face of his photographs, we are forced to witness the face of climate change. Staring at us is the face of a harp seal pup with its furry white coat, born on the ice sea off the Gulf of St. Lawrence; undeniably precious, what used to be an ice-shelf which one could traverse on a snow-mobile for 100 miles in either direction is now just pockets of unstable ice due to increasingly elevated temperatures, leading to nearly 100% mortality of the pups. It’s a face to a tragedy that no one can ignore. 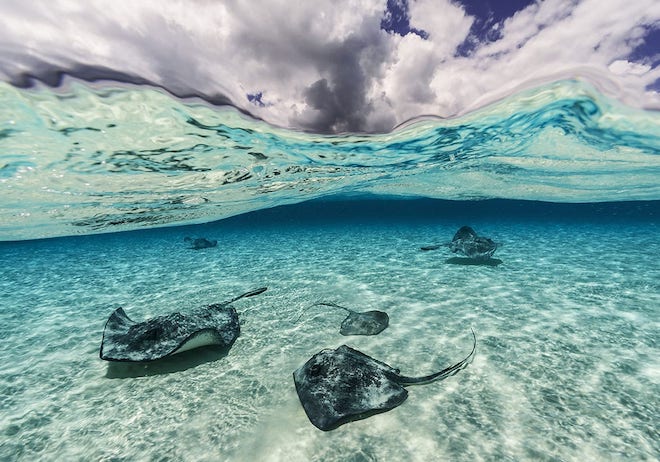 Southern stingrays glide across the perfect ocean stage in North Sound, Grand Cayman Island. I photographed on assignment here when there were seven stingrays, each with a name. After the story thousands of people arrived to swim, snorkel and dive with the gentle rays. Stingray City and Sandbar have become one of the world’s most popular ocean destinations. There are now a few hundred stingrays that act as ocean ambassadors, greeting a nearly a thousand visitors a day. — David Doubilet

Storytelling as one might conclude, becomes a potent arsenal for both science and conservation. The decimation of coral life, including the bleaching of a third of the Great Barrier Reef are tragedies which both Sylvia and David have seen first hand. Diving off the coast of Isla del Toro, a small island close to Majorca, Dr. Earle had had discovered healthy reef teeming with life and schools of barracuda but it’s the untold stories like the loss of half the world’s coral reefs that she feels need to be shouted.

“We have the gift of time and the time to act is now. Any later and it is less likely the planet remains perpetual.” – Dr. Sylvia Earle 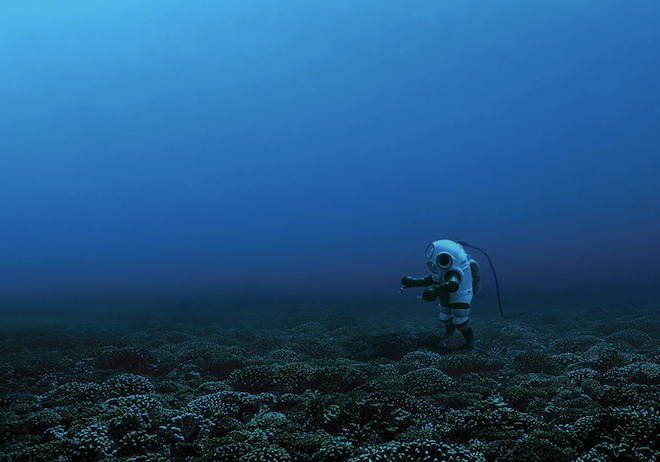 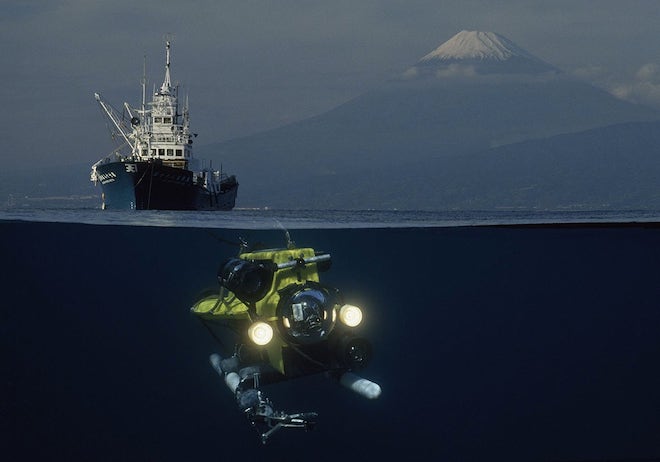 A remote operated vehicle (ROV) descends into Suruga Bay, Japan, as Mount Fuji rises in the background. This image was a technical challenge that required using a traveling mat designed by my genius colleague Kenji Yamaguchi in NG photo engineering. The mat blocked the bottom of the lens so I could shoot Mount Fuji and then rolled the film back to block Mount Fuji so I could shoot the ROV. This very difficult technique married two images together on film in a single frame. — David Doubilet

“From space, the Earth is blue,” a fact that Dr. Earle reminds us in order to reiterate the importance of protecting our oceans. In an interview with Rolex.org, she is emphatic that, “The history of life on Earth is mostly an ocean history. When you pick up a bucketful of water from the ocean, you can see a cross section of life on Earth. The ocean is really where the action is.”

We are fast reaching tipping points in Earth’s trajectory that would render our continued rape of the planet irreversible, if we don’t act now, we might never get a chance to act ever. Dr. Earle said it best, “Any later and it is less likely the planet remains perpetual.”