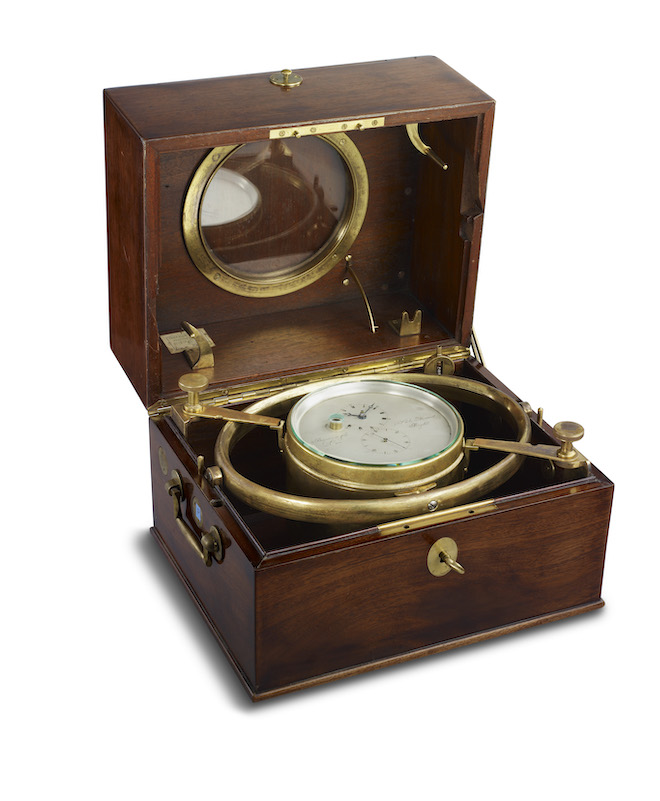 Horloger de la Marine (Chronograph-maker to the Navy) was a title conferred upon Abraham-Louis Breguet by the French Royal Navy in 1815 for his many contributions but primarily for his pursuit of innovations which contributed to the accuracy, particularly in time-keeping on the high seas – a legacy which has led to many milestones which changed the world, during and beyond the watchmaker’s own lifetime.

Sea-faring European economies of the 1600s depended on precision timekeeping for navigating the high seas. And while Breguet wasn’t born until 1747 and so did not contribute to the quest to solve the longitude problem of the sea-faring equation, he built upon the pioneering work of John Harrison, Thomas Earnshaw and John Arnold. Breguet’s appointment as Horloger de la Marine is further testament to his skill as a watchmaker because when you think about it, he wasn’t a specialist in marine chronometers unlike the Berthouds who had borne the title before him. That said, while Breguet might have been a gifted watchmaker, it was his skill at understanding the users and naval officers (who weren’t watchmakers or engineers themselves) that allowed him to focus on details that most other watchmakers typically don’t – for instance: publishing Instructions sure l’usage des Montres Marines – a how to use and explainer on the instrumentation that French naval officers would use. 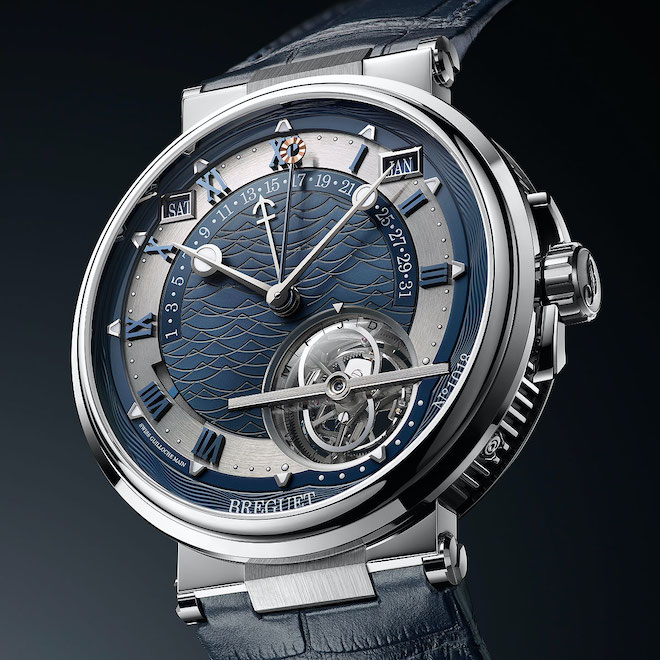 Breguet Marine Équation Marchante 5887 displays the running equation of time at a glance using a “running” (marchante) central hand, celebrating Abraham-Louis Breguet’s appointment in 1814 as a member of the Bureau des longitudes in Paris. If one recalls, England winning the quest for Longitude was what made them the dominant maritime nation of the 19th century

This June, Breguet’s tourbillon would be just shy of 220 years old. Recognising that the precision required to master the oceans would also be useful in a variety of practical civilian and scientific applications, Breguet conceived of a new type of regulator called the “Tourbillon”.  Gravity provokes variations in timing adjustment with each change of position of a watch when worn and the tourbillon was a salve – installing the entire escapement (meaning the balance and spring, the lever and the escape-wheel, the parts the most sensitive to gravity) inside a mobile carriage that performs a complete rotation each minute. Thus, since all the flaws are regularly repeated, they are engaged in a process of mutual compensation.

Even though the progress of watchmaking has made it possible to considerably improve regularity through less novel yet more practical means like a standard escapement, the Tourbillon, patented in 1801, remains a great invention, a legendary milestone. Three years earlier, on March 9, 1798, Breguet had taken out a patent for a “constant- force escapement” applicable to both watches and clocks. His legacy for user-friendliness and practicality lives on today in its new Classique Tourbillon Extra-Plat Squelette 5395. 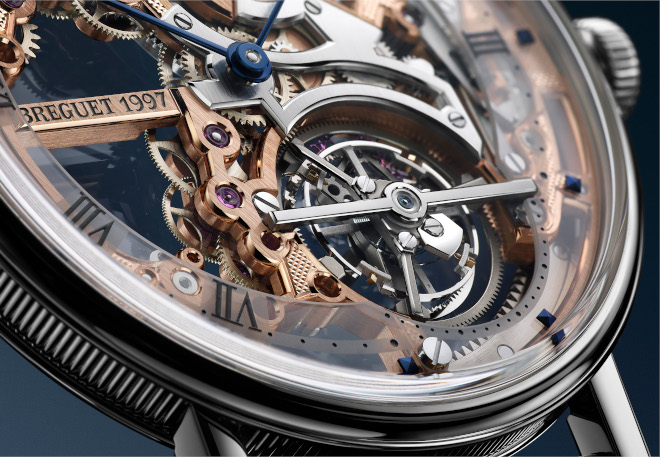 Opting for an immensely wearable, ultra thin watch case, Breguet endowed its Classique Tourbillon Extra-Plat Squelette 5395 with an extra-thin 3mm skeletonised tourbillon movement, exposing the extreme finesse and attention to detail much reminiscent of its namesake founder – the 581 calibre expresses a lineage of technical feats which extending from its historic milestones to these contemporary times best exemplified via a rotor placed on the periphery of the plate, saving on thickness while presenting an unhindered view of the calibre. The tourbillon design is unique to Breguet: a titanium carriage engages directly with the wheel train, not via the intermediary of a pinion at its base, and, what’s more, the silicon escapement has been given a distinct angled shape, something that considerably saves on space. 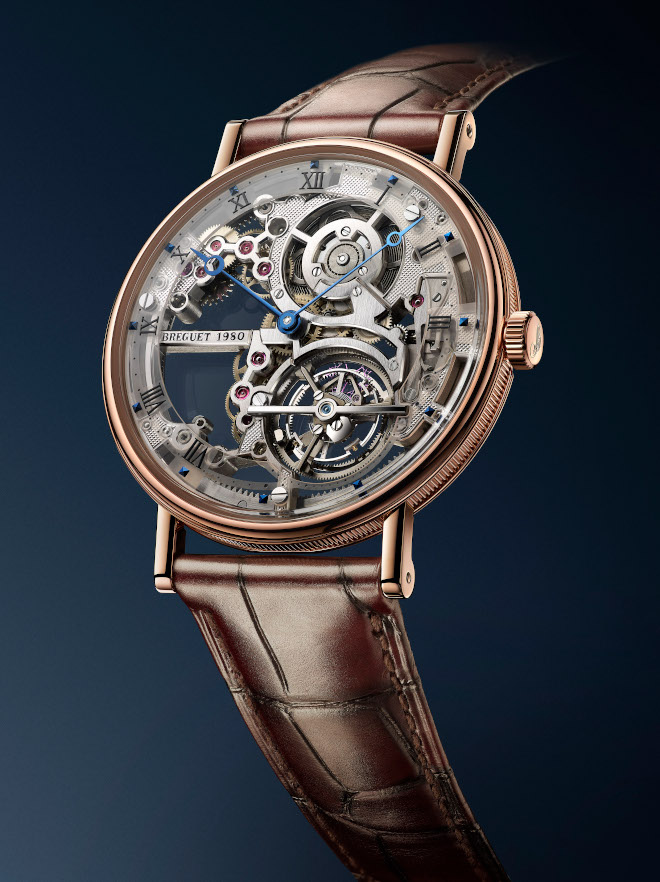 As light as it is thin, the movement is equipped with an 80 hours power reserve and a high-beat four hertz frequency literally unheard of for a tourbillion, add to the fact that when one considers that watchmakers rarely (if ever) use a novel material like gold (due to the malleability of the noble metal) – Breguet has answered the challenge with hollowed out gold plate and bridges while preserving the technical properties of the various different components.

Abraham-Louis Breguet only sold 35 tourbillon watches in his lifetime.  More than 200 years after its invention, the tourbillon is still generating as much fascination as it did then and remains, now. With 300 years of accumulated material know-how, Breguet has espoused its technical expression with artistic emphasis and artisanal crafts, removing almost 50 per cent of the material from its new extra-thin tourbillon movement, without compromising its architectural integrity or its functional operation. This skeleton design, within an 18-karat gold movement is emblematic of what is possible, highlighting the legacy of functional decorative techniques which Abraham Breguet was also recognised for: Engraving, engine-turning, and anglage add to this to create something truly outstanding. 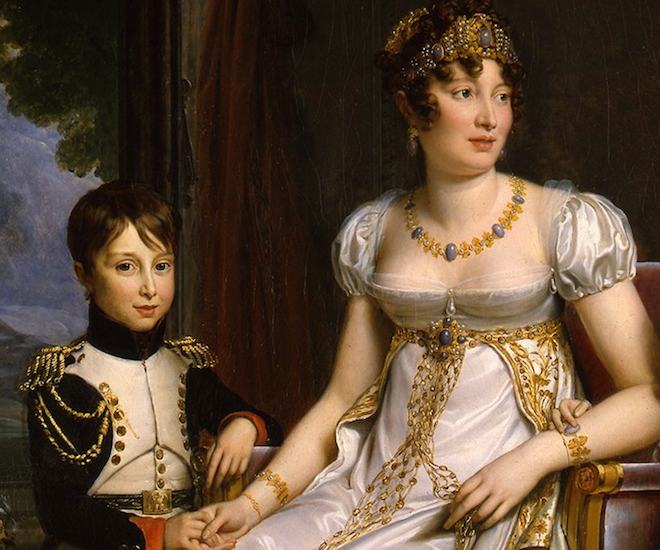 Queen Caroline Murat of Naples placed an order on June 8th 1810 for two unusual timepieces: a grande complication carriage watch for the sum of 100 Louis, in addition to a repeater watch for bracelet for which we shall charge 5,000 Francs.

A tradition which has expanded to the wrists of civilian ladies and gentlemen, the Marine by Breguet embodies the Le Brassus manufacture’s penchant for guillochage (or engine- turning), interpreted into an original motif that reflects the flow of waves on the dial. The collection combines refinement with technical performance, a 3.41 mm thin self-winding 591A  manufacture calibre hidden behind a visage of dial evocative of the sea as it laps the shore. 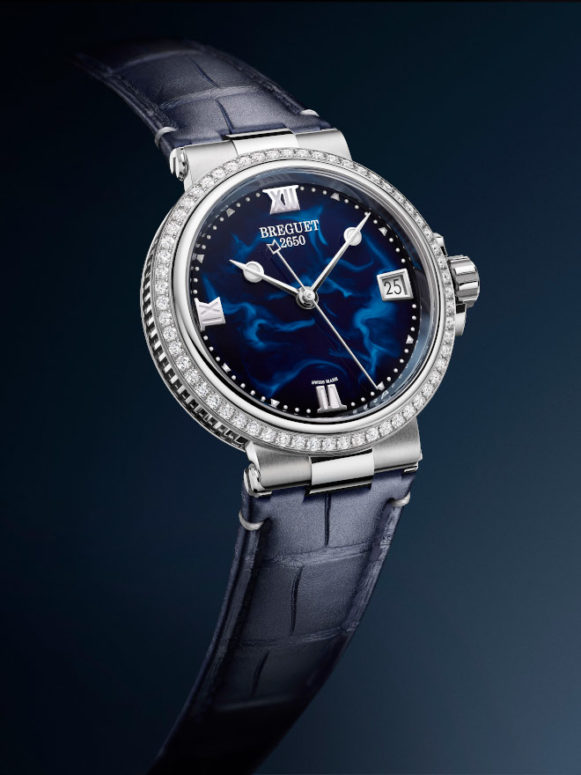 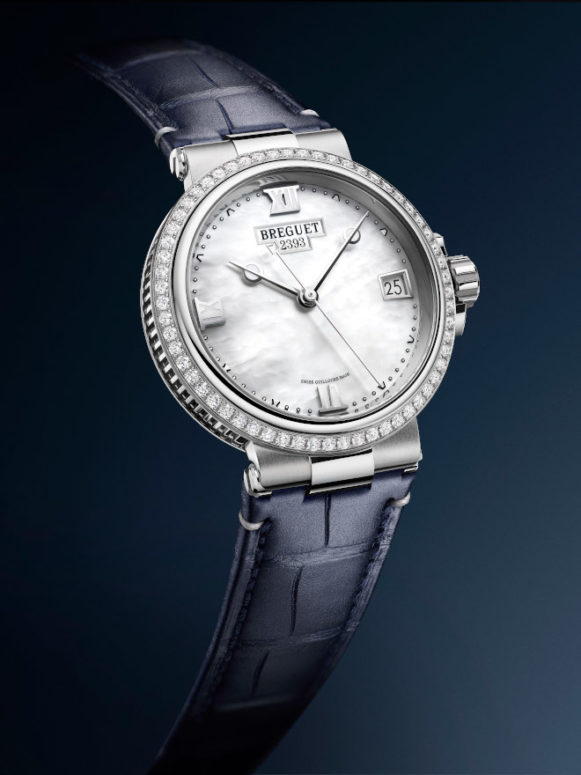 Dubbed “marea”, or tide, the dial of the Breguet Marine incorporates curves; in contrast to the manufacture’s iconic guillochage, which consists of straight lines and circles, the curves in this design capture the natural movement of the water, updating a predecessor dial of the Marine collection. The development of this unique marea pattern took several months, including the manufacture of special cams for the engine-turning lathes. The artisans of the House of Breguet have breathed life into this demanding design on mother- of-pearl, a particularly fragile material, which is prone to fracture when worked and now, turned into miniature sculptural works of art for both the face and rotor of the movement. 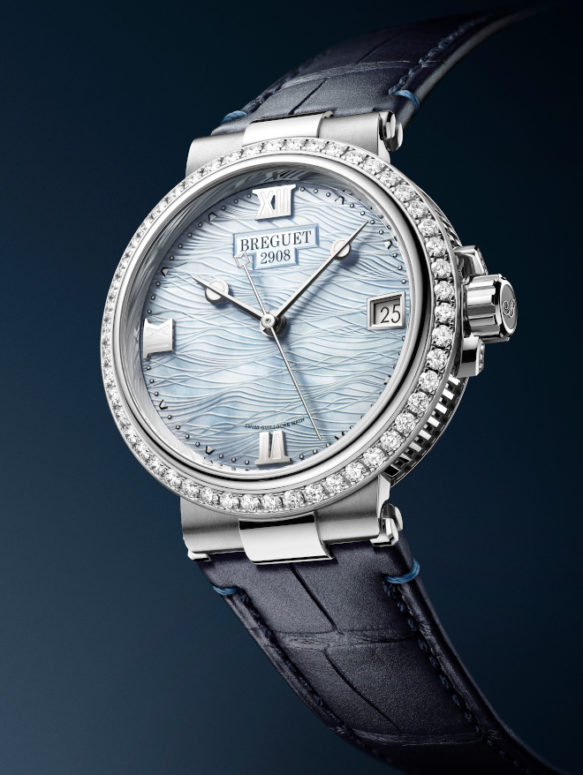 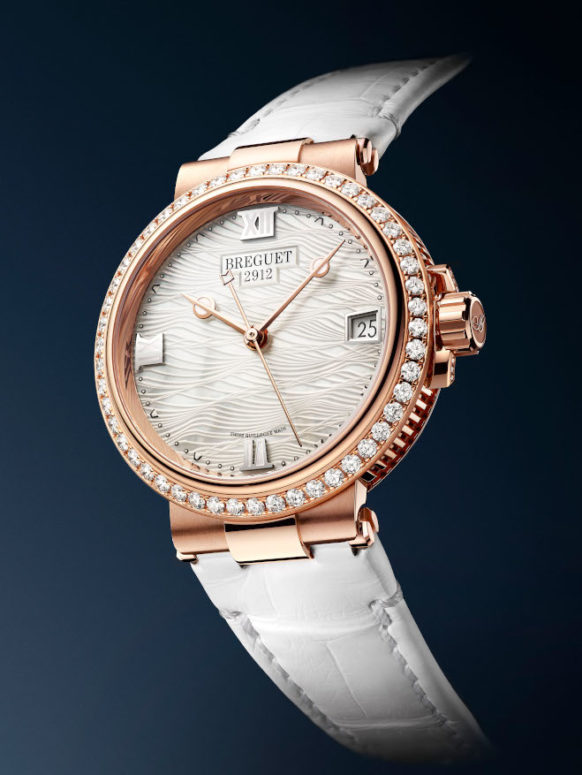 The new Breguet Marine collection for women is a celebration of the marine world in many aspects. The Roman numerals resemble nautical pennants. For use at night, the open tips of the hands, the five-minute markings, and the hour markers are coated with luminescent material.

The sapphire-crystal caseback shows the self-winding 591A caliber and its bars decorated with double engine-turned côtes de Genève calling to mind a ship’s deck boards. The words Horloger de la Marine (Chronograph-maker to the Navy) are engraved on the rim of the case, referring to the title of Chronometer-maker to the honorific on which the French Royal Navy bestowed upon Breguet. 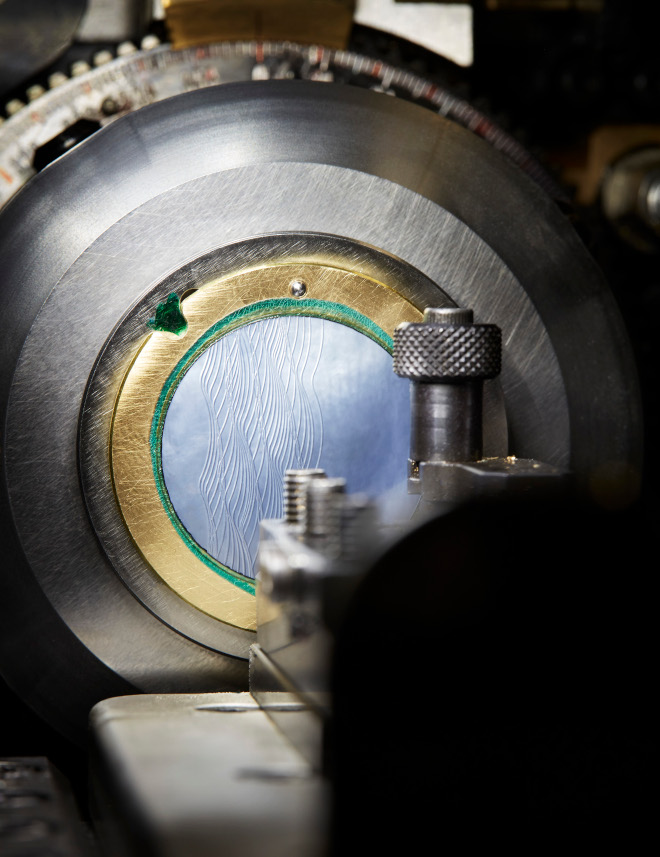 Breguet has also reworked the flutes on the sides of the case. This new design, more distinct and spaced, lends the watch – barely one centimeter thick – a more daring look. The crown protection, diamond-set on gold pieces, appears like a wave at 3 o’clock. Screws in the shape of navigational markers provide a flexible hold for the strap fasteners.

Over 400 years on, we have mastered the intricacies of traversing the waves but today we are barely scratching the surface in what’s required of our stewardship of the seas, Breguet has embarked on philanthropic efforts involved in saving the oceans from the threat of plastic pollution. 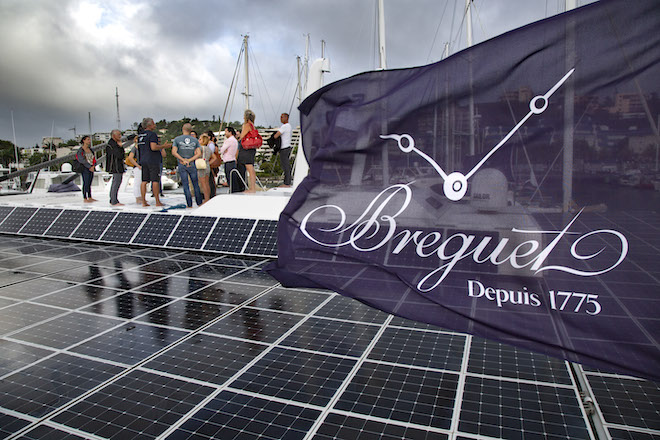 In keeping with the aim of the House of Breguet’s President, Marc A. Hayek, who wishes for the brand to take an active role in protecting our planet, the manufacture is supporting the efforts of Swiss entrepreneur Marco Simeoni’s Race for Water, which supports scientific research on the ecological balance of the deep ocean.

Founded in 2010, Marco Simeoni’s Race for Water launched a series of expeditions since 2015, launching its latest in five-year world tour in 2017 where the main objective is to save the oceans from the threat of plastic pollution and raise public awareness, setting off from Brittany on board a groundbreaking boat sustained on renewable energy and arriving in Asia after a two year journey across the Atlantic and Pacific oceans. 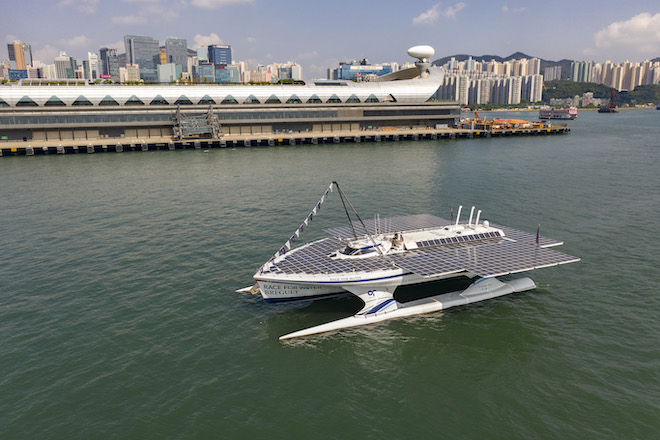 Breguet chose Race for Water over another foundation thanks to its global scope, realistic approach, and outreach to youth. Underscoring its potential efficacy, Race for Water has a strong scientific component, backed by an educational aspect, generating awareness about ocean pollution, while finding a solution to the issue of transforming and repurposing plastic waste based on optimised high-temperature pyrolysis technology.

The boat and its crew intend to reach Shanghai at the beginning of 2020 and then make its way towards Tokyo, coinciding with the city’s hosting of the Olympic Games – with the hope of engaging with local authorities, private individuals and of course lots of schoolchildren (nearly 15,000 people have received outreach since 2017, including more than 5,500 schoolchildren). 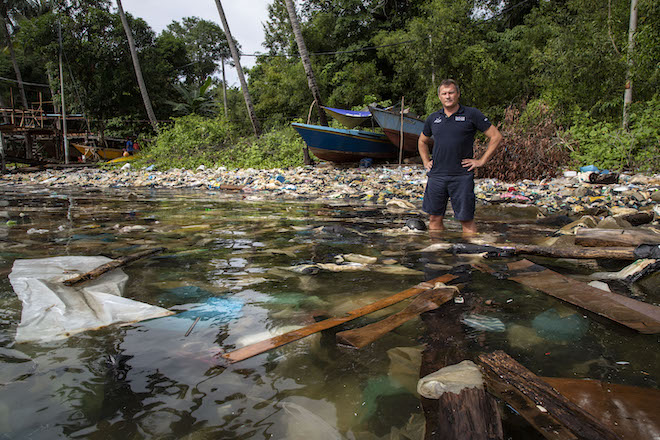 From the race for maritime supremacy to the fight for our planet’s perpetual survival, Breguet has captured our hearts, minds and imagination with their blend of technical mastery and artisanship and now, the Le Brassus manufacture hopes to awaken our souls, with a message of stewardship of the environs in which we live.