Sunreef Yachts has been helping raise the international profile of Polish yacht building since Frenchman Francis Lapp founded the luxury catamaran builder in 2002 in the historic Gdansk Shipyard, on the country’s north coast. And Poland’s profile as a major player in the yachting world recently took another leap after Rafa Nadal was announced as a future owner of the new 80 Sunreef Power. 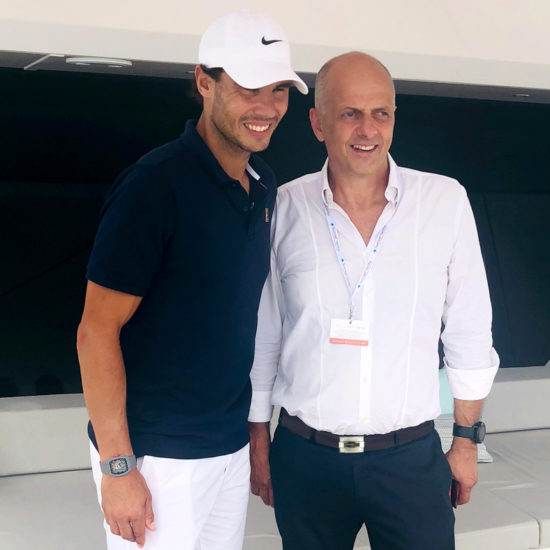 Rafa Nadal, with Francis Lapp, will receive his 80 Sunreef Power catamaran in 2020

Nadal – one of tennis’s all-time greats, with 18 Grand Slam titles – viewed the model’s world premiere at this year’s Cannes Yachting Festival, although his customised version, hull number four, is due for delivery in 2020.

“As someone from an island, the sea is part of our lives and it’s not a secret that I love the sea,” said the Spaniard, who has previously visited and chartered Sunreef catamarans.  “When I’m at home in Mallorca, I try to go out and find that time where I can just enjoy my time on a boat. I am very happy to be on board with the Sunreef Yachts family and would like to thank Francis Lapp for making this possible.”

Lapp’s company has been on a roll in the past year and has already sold over a dozen units of its 80 sailing catamaran, which only made its debut at Cannes last year. From producing about 10-14 units a year, Sunreef completed 17 in 2018 and this year expects to produce about 24, a company record.

“It has been a spectacular year for us,” says Karolina Paszkiewicz, PR and Marketing Director of Sunreef. The company now has over 720 employees, with about 500 from Poland and over 200 from Ukraine, a remarkable head count for a company that customises the layout and interior of every yacht. 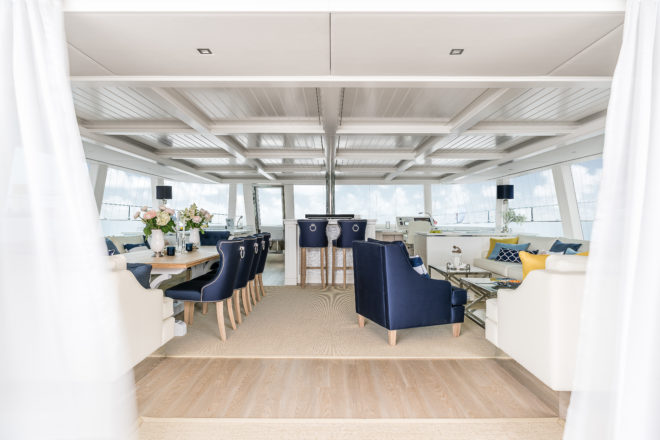 Yet Sunreef’s super-luxurious catamarans are a stark contrast to the historic but decaying brick-walled sheds in which they’ve been built for the past 17 years. The company is now in a transition to a nearby four-hectare (40,000sqm) facility, with the move from Gdansk Shipyard set to be complete by 2020.

The enormous shipyard is situated on the side of the Martwa Wisla river and on Ostrow Island, and established Gdansk as one of northern Europe’s leading shipbuilding cities.

It was also the site of iconic protests in 1980 led by former shipyard electrician Lech Walesa that led to the foundation of the Solidarity movement and eventually the end of communist rule. In the mid-2000s, Jean-Michel Jarre and then Pink Floyd guitarist David Gilmour played big concerts here in tribute to the movement.

Gdansk Shipyard was founded as a state-owned company in 1945 on the sites of former German shipyards considerably damaged in the Second World War, while other large-scale shipyards emerged in neighbouring Gdynia, as well as Szczecin to the west. 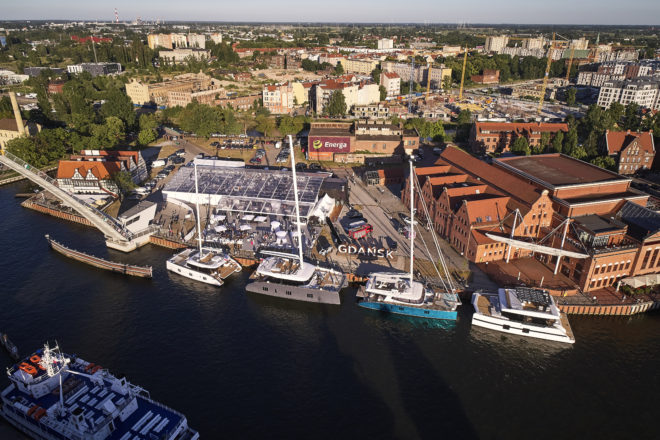 Sunreef, founded in Gdansk in 2002, displays its catamarans in the Old Town for the Pomorskie Rendez-Vous

Poland also developed as a boatbuilding nation after the Soviet leadership chose it to produce yachts, among other products, for all countries from the Eastern Bloc. Even today, many yachts cruising the waters of the former Soviet states – Russia, Ukraine, Belarus, Lithuania, Latvia, Estonia – are labelled as ‘Made in Poland’.

In the 1980s, yachts built in Poland started to be exported, primarily to northern and western Europe, and North America. However, with the political changes following the end of communism, many of the biggest yacht-building companies went bankrupt and new privately owned companies emerged.

BOAT FACTORY OF THE WORLD

In 1992, Jeanneau was among the first foreign companies to  build boats in Poland. Today the Beneteau Group has a 16-hectare (160,000sqm) facility in Ostroda, an hour’s drive southeast of Gdansk, that employs about 900 people and builds Beneteau and Jeanneau boats, including the Merry Fisher 895 Marlin that features in this issue’s Islands & Coasts. 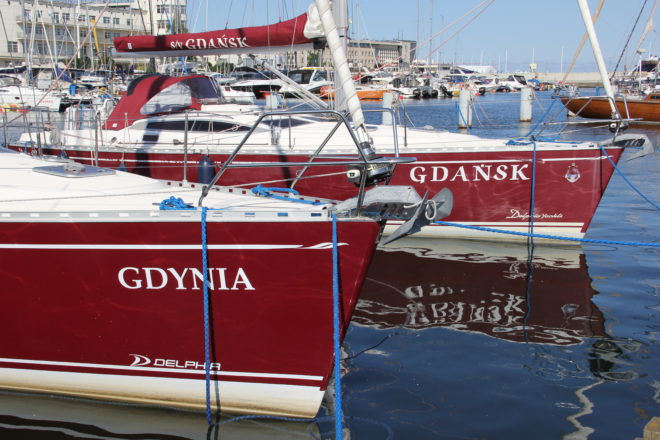 Sailing boats by prolific Polish builder Delphia Yachts, which was acquired by the Beneteau Group late last year and is now focusing on motor boats

Last year, Beneteau Group added a second facility in Poland – and another brand – when it bought Delphia Yachts, one of the country’s biggest yacht builders and now focused on motor boats at its facility in Olecko in the northeast of this country of 38 million people.

Brunswick brands like Sea Ray, Bayliner and Quicksilver are also built in Poland, while other foreign companies that have boats built in the country include Hanse from western neighbour Germany, Denmark’s X-Yachts, Finland’s Axopar, and Norway’s Windy and Askeladden.

The vast majority of yachts built in Poland, including by local brands, are exported and overall production has ramped up dramatically in recent years. According to Polboat (Polish Chamber of Marine Industry and Water Sports), the value of the country’s exported boats doubled from 2013 to 2017, rising from €241m to €484m.

Polboat also announced that the country’s annual production recently returned to its pre-2008 financial crisis high and has since bettered it, with 23,000 boats in a year and turnover increasing by 15 per cent. About 95 per cent of the boats are exported, primarily to Norway, France, USA, Netherlands and Germany. 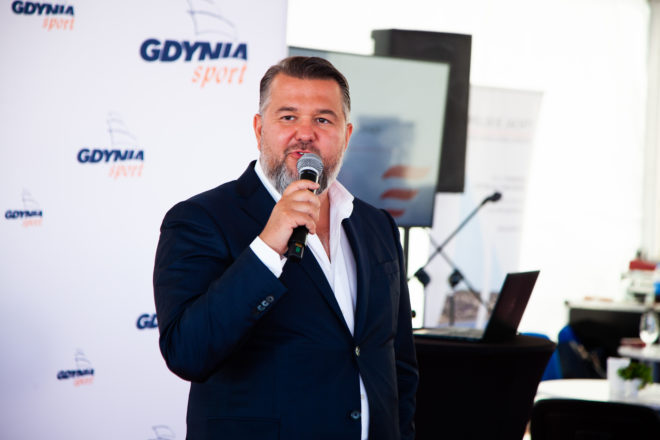 Furthermore, Polboat states that Poland is Europe’s leading producer of motorboats with outboard engines from 6-11m (20-36ft), while globally it’s second only to the USA.

“Poland produces a lot of boats for local brands and also a huge number for foreign brands. This shows we’ve built trust and that this is one of the best countries to produce boats and invest in,” says Sebastian Nietupski, President of Polboat.

“This is now one of the best times ever in Poland as we have benefited from European grants for new projects and investments, so many of our boatyards have brand-new machinery and the latest technology. This is a really strong asset.

“But we don’t just want to produce or follow. We want to be leaders, to be the best. We want Poland to be known for the best fuel-economy solutions or the most innovative designs. In fact, because of brands like Galeon, foreign shipyards are now copying our design ideas.”

There’s a healthy representation of local brands among the massive number of Polish-built boats exported around the world, with Galeon leading the local charge and still growing fast, globally and particularly in the US. 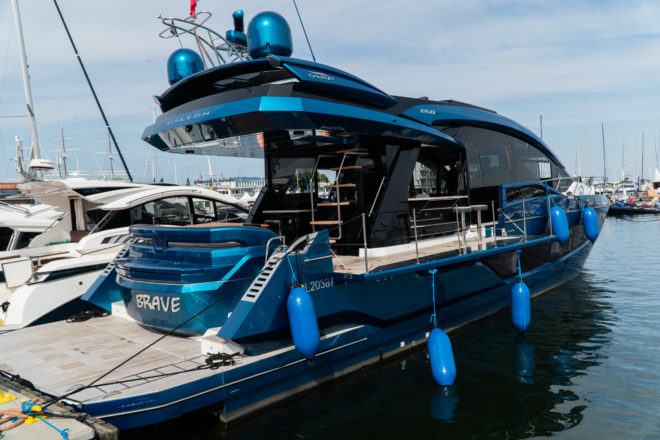 Established in 1982 in the communist era, Galeon now has 1,400 staff working on 30-49ft models in its inland site in Straszyn and 50-78ft yachts at its bigger site, with marina, along the Martwa Wisla river.

Across the world, Galeon has become renowned for innovations like the rotating cockpit sofa and ‘Beach Mode’ drop-down sides, features first incorporated on the Tony Castro-designed 500 Fly unveiled at Cannes in 2015. Such features have since been rolled out on other models including the 460 and 640.

The brand’s huge growth in the US has followed its sales partnership from 2016 with MarineMax, the world’s largest yacht retailer, while other dealers around the world include Hong Kong-headquartered Asiamarine and Alexander Marine Australia.

“Our innovations have brought us a lot of success around the world in the past few years, although we’ve only been really active in the US in the last three,” said Grzegorz ‘Greg’ Tuszynski, Galeon’s Managing Director. 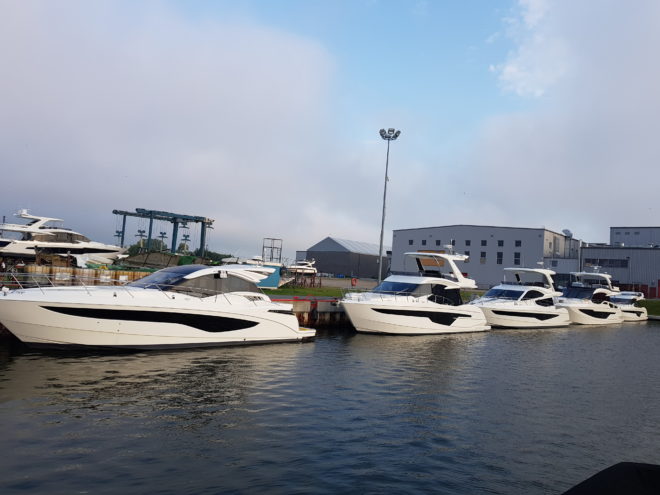 “Last year we were already fourth in sales among 40-70ft motor yachts in the US, making us the top European or non-American brand. We expect this ranking to increase in 2019 and are hopeful of eventually becoming No. 1, while also growing in Europe, Asia and Australia.”

Poland enjoyed further acclaim in May when the Conrad 133’ Viatoris, built in Gdansk, was honoured at the World Superyacht Awards in London, winning Best Displacement Motor Yacht 300- 499GT – 30-47.9m.

Conrad Shipyard has generally been a custom-boat builder and has in the region of just 80 full-time staff, but can also draw on the resources of its parent company, Marine Projects, which has about 400 people working in its waterfront site on the Martwa Wisla.

With a name inspired by Heart of Darkness author Joseph Conrad (born Jozef Teodor Konrad Korzeniowski), Conrad was established in 2003 and has worked on a wide variety of motor yachts, classic tugboats and large sailing yachts, including tall ships such as the 67m Le Quy Don for the Vietnamese navy.

However, when the 40m Viatoris, designed by Reymond Langton for a Russian owner, was shown at both Cannes and the Monaco Yacht Show last year, it enabled Conrad’s build quality to be compared with the most renowned superyacht builders. 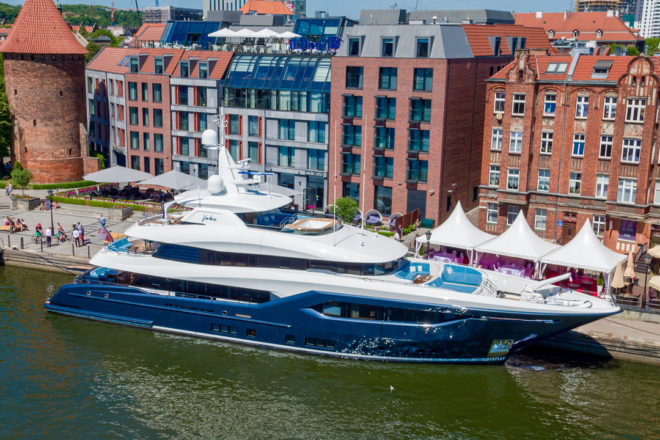 Conrad’s 133ft Viatoris, pictured in the heart of Gdansk’s Old Town, was a winner at the 2019 World Superyacht Awards, another success for Polish yacht building

“Presenting Viatoris at Cannes and Monaco put us in a completely new market. Viatoris showed we can be compared with superyachts from the Netherlands, for example, and for a good price,” says Michael Michalczewski, Conrad’s Marketing and Sales Director.

“Also, as it was more of a commercially viable project, we can now go down the route of offering semi-custom builds, using the Conrad 133’s naval architecture.”

Because of its rich shipbuilding history, Poland is well known for its body work, and local shipyards often construct the hulls or superstructures for globally renowned superyacht builders, particularly from Germany and the Netherlands.

Dutch conglomerate Damen Group, the parent company of renowned superyacht builder Amels, has a marine-components facility in Gdansk and its own shipyards in Gdynia and also Kozle in the south, west of Krakow. In recent years, Damen Shipyards Gdynia built the 140-tonne aluminium superstructure for the 83m Here Comes The Sun, Amels’ largest yacht to date.

Note: The second part of the article will appear on Luxuo on October 17