Gdynia is just 20km along the north coast of Poland from Gdansk, while in-between is the resort city of Sopot, the three forming the Tri-City area. Gdynia has a population of about 250,000, but in contrast to Gdansk, it’s a young city, only achieving city status in the 1920s following targeted development after the First World War. 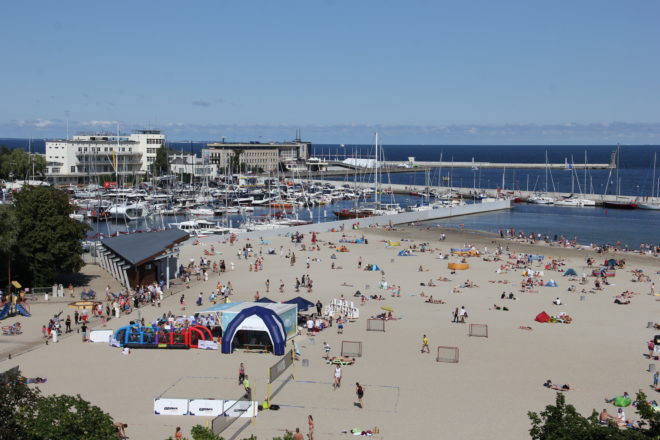 This summer, Gdynia was in the spotlight when it hosted over 400 sailors from 66 nations in the Youth Sailing World Championships, with races held just a few hundred metres from locals playing volleyball and sunbathing on the huge beach in the city centre.

During the same week, Marina Gdynia, beside the beach, was hosting the 14th Wind and Water on-water show. The Gdynia event features in-water and on-land displays, in contrast to the indoor exhibitions in the capital of Warsaw early in the year and Katowice in October.

This year’s Gdynia show event attracted 11,000 visitors over the four days, according to organisers, with leading local brand Galeon displaying a strong line-up including a 650 Skydeck finished in a dramatic shade of blue.

Parker, another established Polish builder, showed its Tony Castro-designed Monaco 110, the company’s flagship. The 26-footer won the Best for Family category at last year’s Best of Boats Awards in Berlin, was named 2019 Yacht of the Year in Poland and was on display at the Cannes Yachting Festival in September. 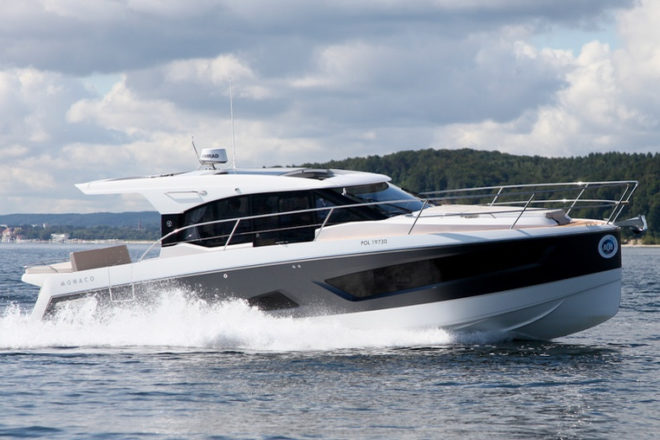 Parker’s flagship Monaco 110, which showed at this year’s Cannes Yachting Festival, had an early order from Hong Kong

Philip Scott, Managing Director of Parker Poland, revealed that the first unit of the Monaco was sold to a Hong Kong owner two years ago at the Southampton International Boat Show, while admitting the new model generally had some pushback from clients due to its outboard engines.

“People were like, we love the boat, but why outboards? We were the first in Europe to launch a boat of this size with outboards, but I said ‘watch this space’. Look what’s happened in the last two years. Just about every big player has introduced an outboard boat.”

Scott moved to Poland back in 1972 to work for Parker in another line of business. The company entered the leisure boat business in tthe mid-1980s as the distributor for Mercury Marine, a position it still holds today and for good reason, considering the amount of the brand’s engines seen on boats in the Gdynia show. “Then, as the Wall came down and the system changed, we started building boats,” Scott says.

Initially focused on RIBs, Parker also produces motor boats from 20-37ft and has 420 staff at its Model Art boatyard, which also produces boats for Nimbus, Windy and Askeladden. 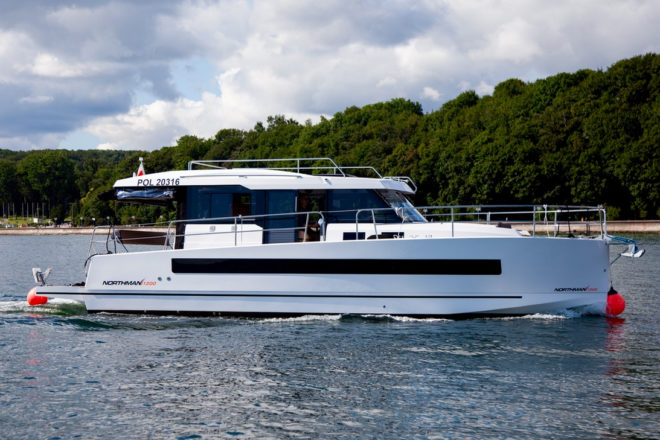 The Northman 1200, pictured in Gdynia, also exhibited at Cannes in September

Also on display was the Northman 1200, which has moved into double figures for sales since its launch last year and is another of this year’s Cannes line-up. Designed for economical cruising, the 40ft Category B boat has a displacement hull and a single 57hp Yanmar as standard, but can fit two 150hp outboard engines or 110hp inboards.

The standard layout features three nicely finished double cabins, while a large swim platform is available (if inboards are used). Interestingly, the flybridge steps are located forward, while the fly itself features large sunpads, low handrails and a simple backrest; a flybridge version with a second helm station is also available.

Based in the Masurian Lake District in the northeast, two hours’ drive from Gdansk, Northman has over 100 staff and produces about 200 boats a year, mainly the Maxus line of sailing yachts up to 33ft, with a 34-footer due to be launched in 2020.

The Gdynia event also showcased several stylish day cruisers built by enthusiasts with a passion for classic design and primarily for use in lakes, which are common playgrounds in Poland and many countries in the region. 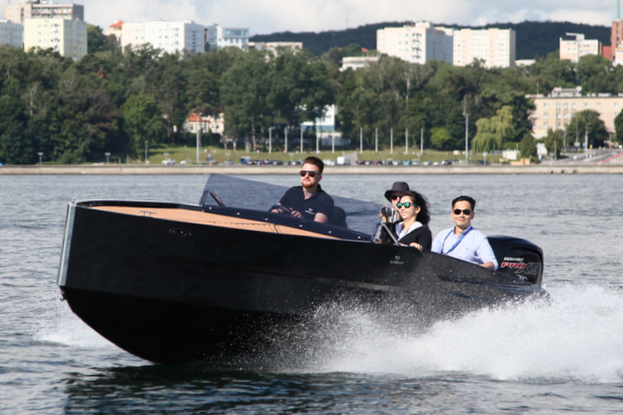 The Diamond 550, pictured in Gdynia, was a late addition to the Monaco Yacht Show

D-Boat is a young company, yet its striking 37-knot Diamond  550 was part of this year’s Monaco Yacht Show, and had sole nine units sold in Europe – including three in Poland – since the prototype was unveiled at Boot Dusseldorf in 2017.

The 6m boat has a forward cabin, seating for five, a smooth foredeck suitable for sunbathing, swim ladder, hand-held shower and optional fridge.

It’s easy to drive, performs well and designed for fun, with a powerful Fusion Apollo sound system, which is no surprise as CEO Szymon Zielinski, 28, is also a DJ. D-Boat designs and assembles the boats in Radzymin, near Warsaw, and outsources production of the 5.5m-long, 2.3m-beam fibreglass hull.

“We love Frauscher and Riva designs, and even Porsche, but most people don’t have that money, so we wanted to create a similar type of boat but more affordable,” said Zielinski, who co-founded the company when he was 26. “It’s easy to use and only one tonne, so people can even put it on a trailer and take it out for the weekend.” 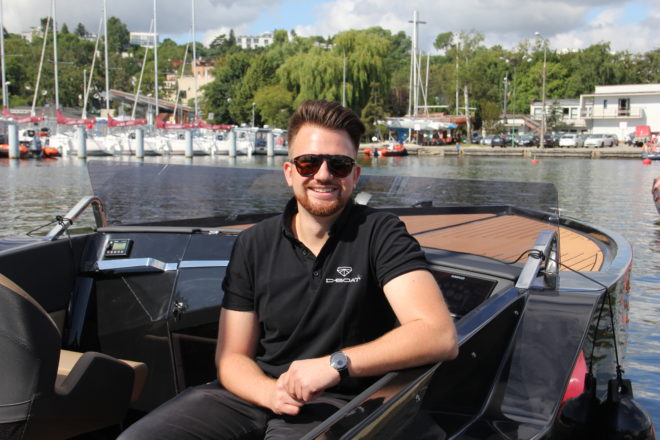 The Category C boat has Simrad navigation and instruments and is offered with either a single 115hp or 200hp Mercury engine at €65,000 or €73,000 respectively, while colours, layout and materials can be customised. D-Boat also offers a standard bimini as an option or a more expensive system with carbon-fibre poles.

White Eagle, founded by brothers Artur and Rafal Osipowicz, exhibited the first hull of its Eagle One, an attractive 6.3m wooden boat that, like the Diamond 550, has two bucket seats and an aft bench for three. It was launched in late 2017, yet recent sea trials showed it still wasn’t the finished product, with work to be done on performance-related aspects.

However, it’s another example of the pioneering spirit among young Poles. Both brothers are engineers and businessmen, and decided in 2015 to set up a boatyard in Lodz, west of Warsaw. The company also produces the Zephir 750 houseboat, but believes in the export potential of Eagle One, which is fitted with a single 80hp Mercury and sells for €120,000. Brothers Artur and Rafal Osipowicz exhibited their 6.3m wooden Eagle One in Gdynia

“We view it as a lake boat in Scandinavia, Germany, Austria or France,” Rafal said. “This boat gets a lot of attention when you drive in and out of marinas, or on the water, more than some US$2 million boats.”

On land, Etiuda Yachts displayed its brand-new Musica 71, a red-hulled 7m day cruiser inspired by Italian boats of the 1950s and 1960s, although without a cabin. The boat was still in the testing stage and wasn’t ready to be shown in the water.

With an inboard engine and seating for five, the Musica marks a big design departure for parent company Markos, which actually has 700 staff working across other businesses including composites, automotive parts and rescue boats. The company has been producing leisure boats for the past 17 years, primarily for the Netherlands and Germany, but none that look like Musica.

“This is a retro style, our interpretation of those beautiful Italian boats, and is the first model of a new line,” said Etiuda’s Szymon Koseski. “This is not our core business, but we do the design and production mainly for pleasure. Yes, it’s also business, but not calculated.” It’s another example of the passion and entrepreneurial spirit that has enabled Poland to establish itself as a world leader in the production of small motor boats.

Yet the country is much more, with local brands winning over the US market in mid-sized motor yachts, excelling in luxury catamarans and producing award-winning superyachts. And even the foreign brands are starting to tell the story of their Polish production.