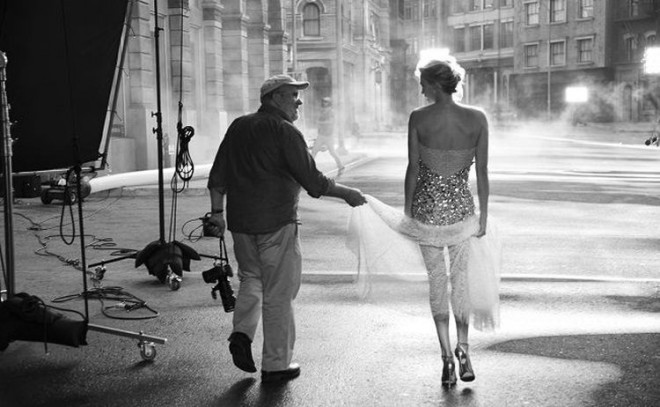 Peter Lindbergh on set with Charlize Theron for Breitling #SquadsOnAMission

“A fashion photographer should contribute to defining the image of the contemporary woman or man in their time, to reflect a certain social or human reality. How surrealistic is today’s commercial agenda to retouch all signs of life and of experience, to retouch the very personal truth of the face itself?” – Peter Lindberg,  May 2016 issue of Art Forum.

Peter Lindbergh may died this week aged 74, but he has left us a legacy of his vision, a world untouched by make up and photoshop, and a plethora of raw, stark and iconic black and white images which shaped photography culture for at least a decade. 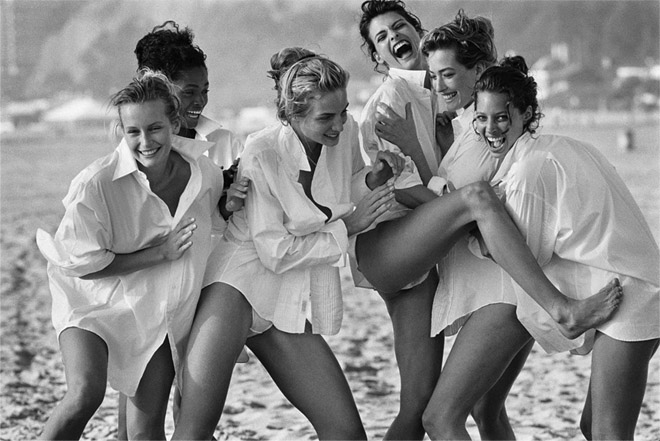 His signature style and aesthetic crossed genres, spanning industries – but most famously, he was herald of the Age of the supermodel, catapulting runway stars Naomi Campbell, Linda Evangelista, Tatjana Patitz, Christy Turlington, and Cindy Crawford into global superstardom when he featured them on his January 1990 cover of British Vogue.

“Refusing to bow to glossy perfection is Peter Lindbergh’s trademark – the essence of the images that look into each person’s unvarnished soul, however familiar or famous the sitter” – Suzy Menkes 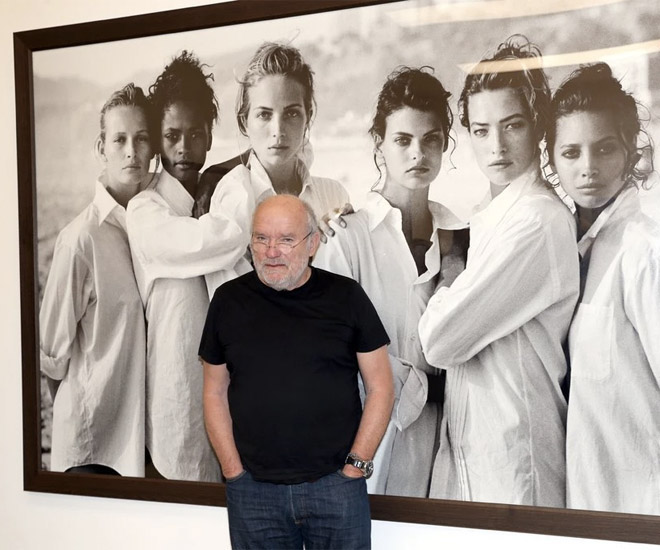 Indeed, his hyper-realistic portrayals of the world’s beauties “took the gloss off” as Suzy Menkes would assert, specimens of human perfection, making them appear “as they are”. In essence, diminishing the commercial perception of high gloss fashion photography that turned their subjects into advertisements.

Lindbergh’s un-retouched portraitures were so influential that he became the first photographer in the history of the Pirelli Calendar to be invited to shoot for the third time. He had previously shot for Pirelli in 1996 and 2002. Born Peter Brodbeck in Leszno, Poland, the graduate of Berlin Academy of Fine Arts was originally a painter in 1960s but later he discovered his joy of taking pictures of his nephews and nieces. By 1973, Lindbergh opened his first studio in Düsseldorf and then a four decade career as the world’s premier celebrity photographer.

Ironically, unlike most fashion shoots of the day which were taking place in studios, Lindbergh would be a pioneer of high-fashion backdrops in the real world in back alleyways, street corners and fire escapes, often with standing lights purposely in shot rather than carefully hidden away. “Fashion is a notoriously cheap and treacherous financial backwater of unpaid bills and screwed assistants. Peter would always come through even for his thirds. As an assistant in those days…that was a kindness you did not often experience as you tried to work with the very best.” – A former collaborator of Lindbergh’s commenting on Peter’s personal legacy

His work has been shown in renown museums such as London’s Victoria & Albert Museum and the Centre Pompidou in Paris, but ultimately, its not only a professional legacy but a personal one that Lindbergh has left behind. Opining on NYT, B.T. commented on his perspectives having worked with Lindbergh, “He was one of the kindest people I’ve ever met, and by far the kindest person in imaging or advertising or fashion-whatever you want to call it. He was well paid-sure. Anyone actually THAT good at what they do deserves to be. These women were pretty but Peter made them magic. They would not have been magic without him. Their age did not matter. And unlike basically every other photographer for the last forty years, all Peter needed to do this was the sun and a wall. Nobody else evoked such a distinct look-and in a medium (B/W) which most everyone else felt had become passé with the 60’s. He built brands single handedly with nothing but a camera. Peter paid his crew himself when clients were too cheap, or when celebrities canceled at the last minute, or advertising clients stiffed on a prelight day. Fashion is a notoriously cheap and treacherous financial backwater of unpaid bills and screwed assistants. Peter would always come through even for his thirds. As an assistant in those days…that was a kindness you did not often experience as you tried to work with the very best. Most of the best were not generous. But Peter-he was generosity personified. He was the definition of a gentleman and the kindly professor you wanted to go drink with, all rolled into one. And he was really fun to drink with.”