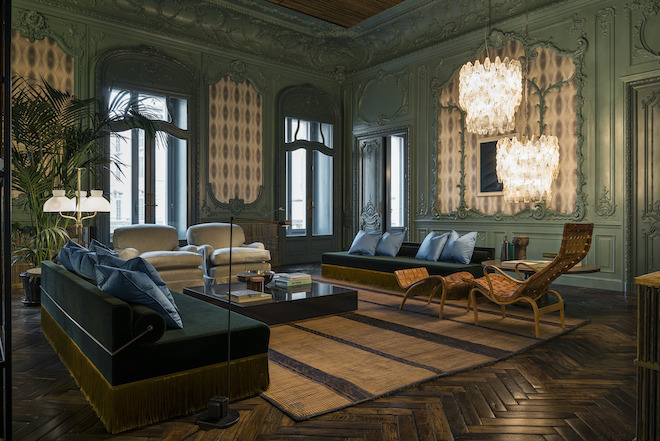 Founded in Rome in 1925, Fendi is an Italian luxury fashion house perhaps better known for its fur and leather accessories. The house eventually expanded to ready-to-wear, shoes and eyewear but where Fendi’s philosophy of combining traditional artisanship and innovation truly shines, is in its tragically underrated but gorgeously well-appointed luxury apartments furnished with their Fendi Casa line.

Fendi is no stranger to interior design, having expressed their upscale Roman aesthetics in an exclusive waterfront condominium in Miami named – Fendi Chateau; and even dressing the gardens of the Grand Principe di Savoia Milano. Fendi’s own private suites themselves reflect the Italian capacity for rinascimento, most recently espoused in exquisite Bvlgari jewel-crafts and watchmaking.

The Italian Renaissance or Rinascimento marked humanity’s transition from the Middle Ages to early Modernity and hence, it is fitting that the contemporary purveyors of luxurious baroque have tempered their penchant with Italian grandiosity with refined minimalist aesthetics. Hong Kong-headquartered Interior Architects Cheng Chung Design (CCD) working out of their Senzhen offices recently marked the arrival of Beijing as a modern metropolis in the same league as New York and London with a new architectural landmark – One Sanlitun Beijing. 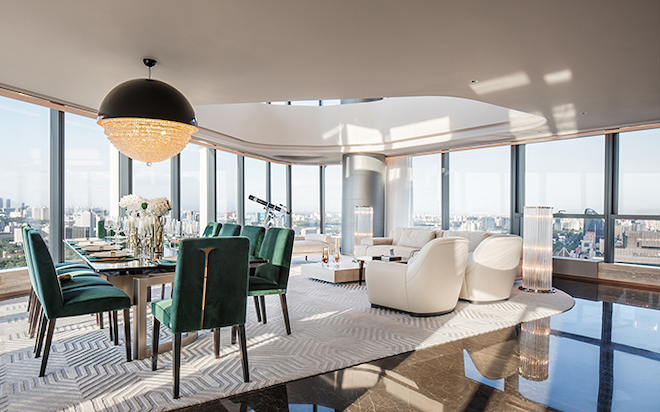 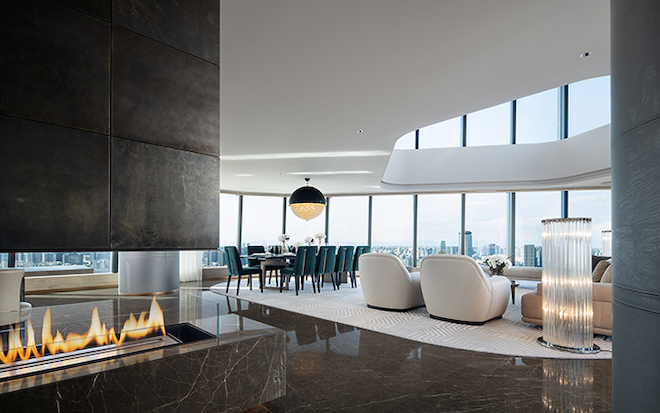 Joining international architectural titans like One 57, One Hyde Park and One Shenzhen Bay, Beijing’s One Sanlitun soars into the skyline and enjoys a rare serene ambience while being situated at the busiest and prosperous commercial hub of China’s capital city. Within One Saniltun Beijing, CCD envisioned the interior opulence of its series of luxury serviced apartments by taking inspiration from the industry’s most famous marques, featuring themes, from Armani, Aston Martin, Chanel, Hermès and Bottega Veneta, but it appears that the design studio latest magnum opus draws inspiration from Fendi. 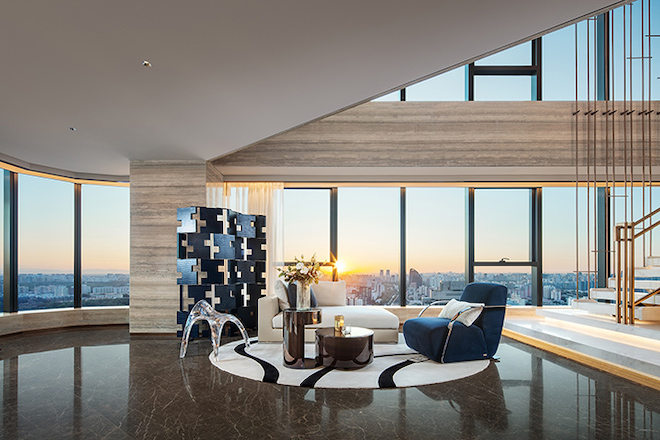 Beijing’s One Sanlitun ‘Fendi apartment’ takes inspiration from the Italian fashion house and with its array of plush materials and use of grand spaces, it looks something out of Italy’s Palace of Caserta (the real world interior of Star War’s Naboo Theed palace) dressed with contemporary finishing. The result is a classic Fendi aesthetic of strong contrasts and surprising juxtapositions, history and imagination; an elegant dialogue between old and new, from layout to the décor. 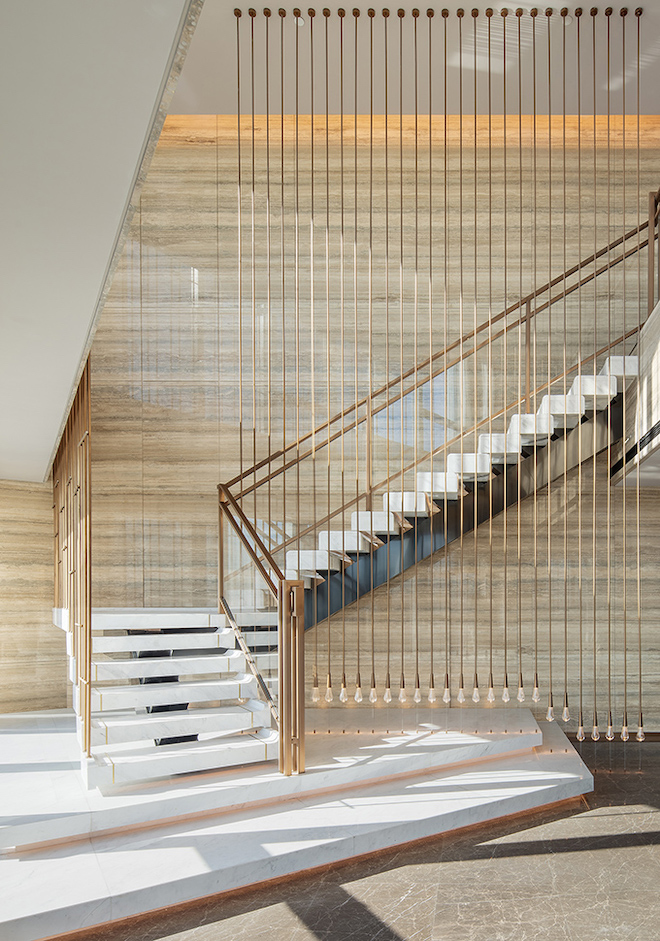 A palatial 6.2 metre high foyer provides plenty of Italian grandiosity by way of luxurious brass, velvet and white marble backed by the dominant sculptural staircase inspired by Rome’s famed steps but the linear light fixtures and furnishings within are kept tastefully elegant, hence avoiding the over-the-top elements which often characterised the Renaissance.

Boasting impressive views of the city below, the large-scale dining and living area are designed to provide a sense of immense space via large be french windows on three sides bathing the magnificent Fendi apartment in light by day and then a romantic stargazing experience by night. 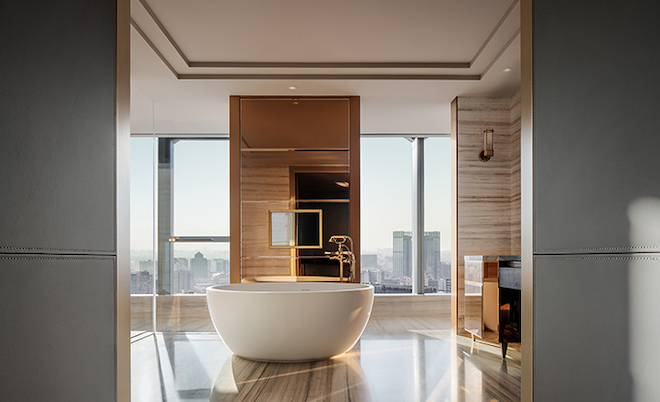 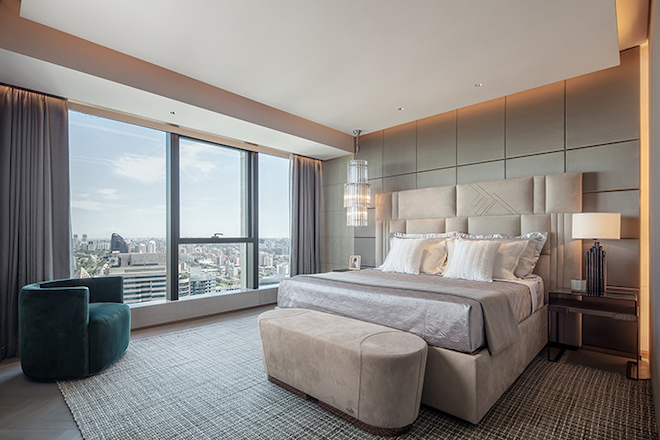 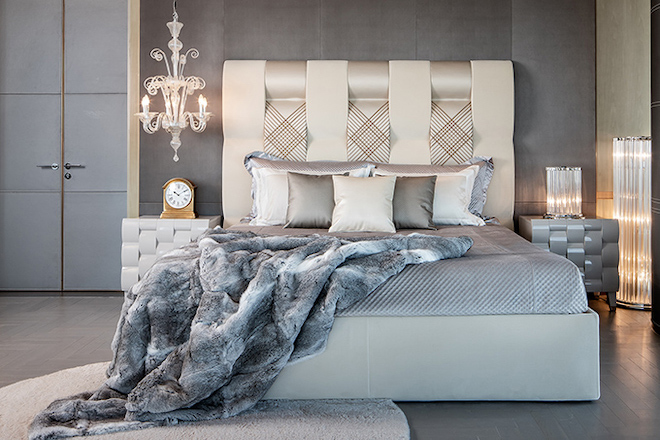 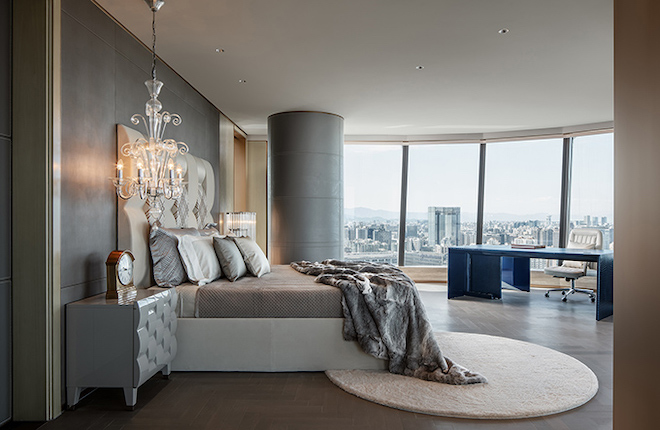 The dining area is expansive, designed to incorporate both western techniques and Chinese cuisine while a bar counter and large table meets the needs of differing social situations from simple house parties and cocktails to Lunar New Year re-union dinners, dining with the backdrop of one of the world’s ever-changing cityscapes redefines ‘luxury’ for those who look for private yet unique living experiences in the city center.

In the bedrooms are well appointed and immensely welcoming with use of sumptuous fabrics and the joining of a spacious yet intimate atmosphere where the theme of large french windows continues to abound – windows to the city on demand or an enclosed private boudoir for rest and recompense, all executed by practitioners of superb craftsmanship. Fendi’s One Sanlitun Beijing is your Caserta Palace in the sky. 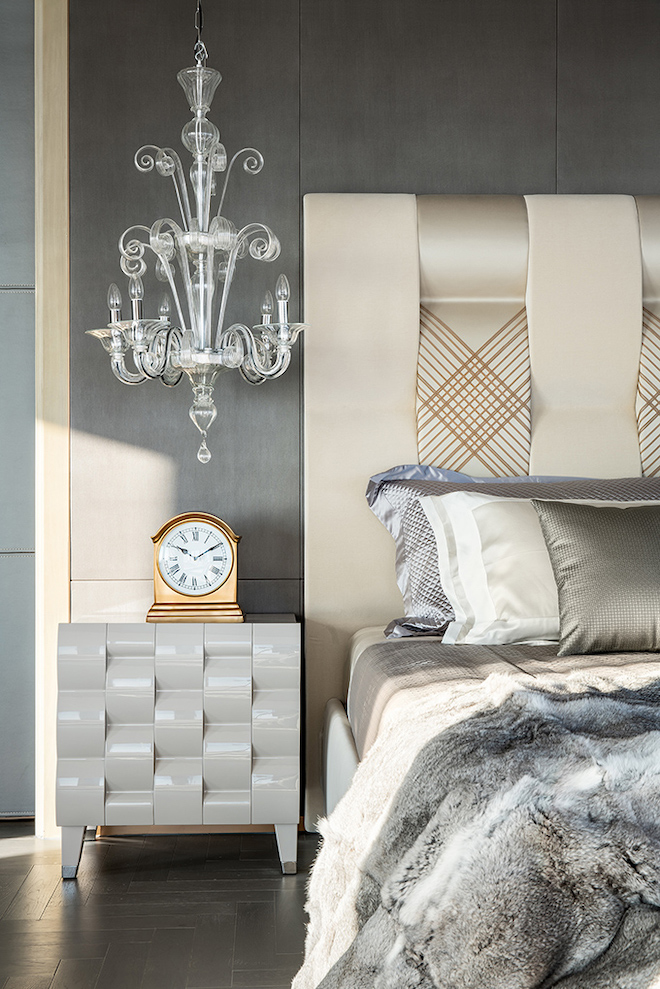