Niko Architecture’s House In The Landscape 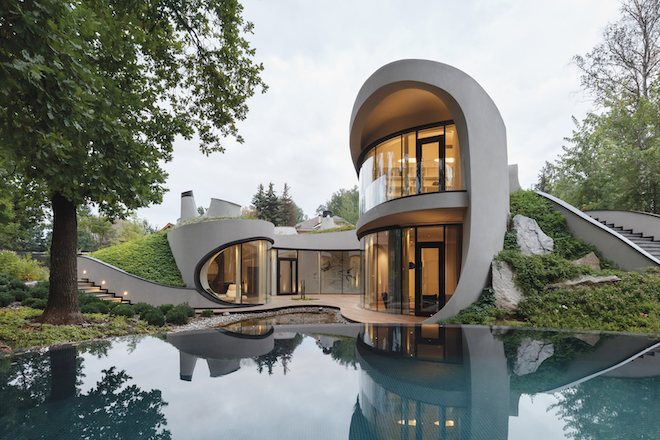 When architect Frank Lloyd Wright designed Taliesin West and Fallingwater (recently added to the UNESCO World Heritage List), he pioneered the concept of organic architecture. Given our growing environmental consciousness, Wright’s philosophy of conceiving prime real estate in the vein of dwellings that were part of nature rather than domiciled atop of it, soon grew to an architectural movement. Ironically, organic architecture was something that Wright continuously struggled to define throughout his life and yet, it was the essence of his creativity and the thing which not only answered the challenges of modernity, and social change but also birthed some of the most compelling examples of prime luxury real estate design.

Niko Architecture’s House In The Landscape (the Bureau is based in Russia, English isn’t their first language) follows in the same vein of Wright’s organic architectural movement – a piece of luxury real estate interconnected with the environment, joining the needs of man with the needs of the living world. 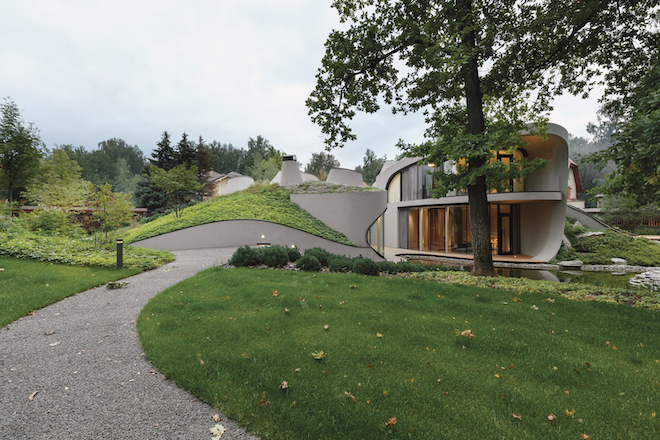 Rooted in nature’s forms and principles; Niko’s House in the Landscape focuses on the connection from interior to exterior and the use of abstracted natural geometries. Architecture forebear Wright distinguished a spiritual quality from physical existence, observing that in organic architecture, the “third dimension is not thickness but rather “a sense of depth which issues as of the thing not on it,” intrinsic to a structure. It is a depth of character in a sense, rather than a physical dimension” – it is here that 300.0 m2 slice of prime Russian real estate is not some swanky expression of luxury and excess but harmony of nature and dwelling – in this context, its resemblance to Lord of the Ring’s Hobbiton homes is understandable rather than incidental. Constructed from reinforced concrete, this gorgeous naturalist slice of Russian real estate looks like it’s emerging from the grassy knoll and the surrounding flora. 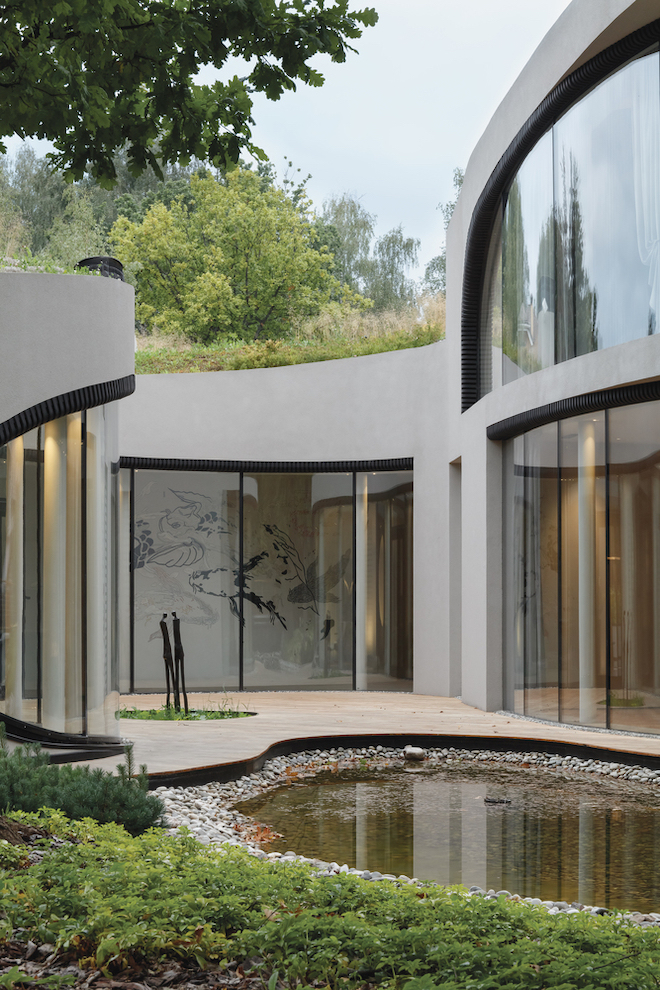 Deeply sculptural, Niko Architecture further integrates their House in the Landscape into its surroundings via a green roof planted with woody and herbaceous species, matching the luxurious Russian real estate with its natural environs. The building forms visual zones, masking the inner, private courtyard from prying eyes due to the orientation of the premises inside the site and the main volume of the structure hidden by the landscape, turned to the village driveway. To provide the natural light of the rooms during the day, light lamps were designed in the roof, directed by the movement of the sun. 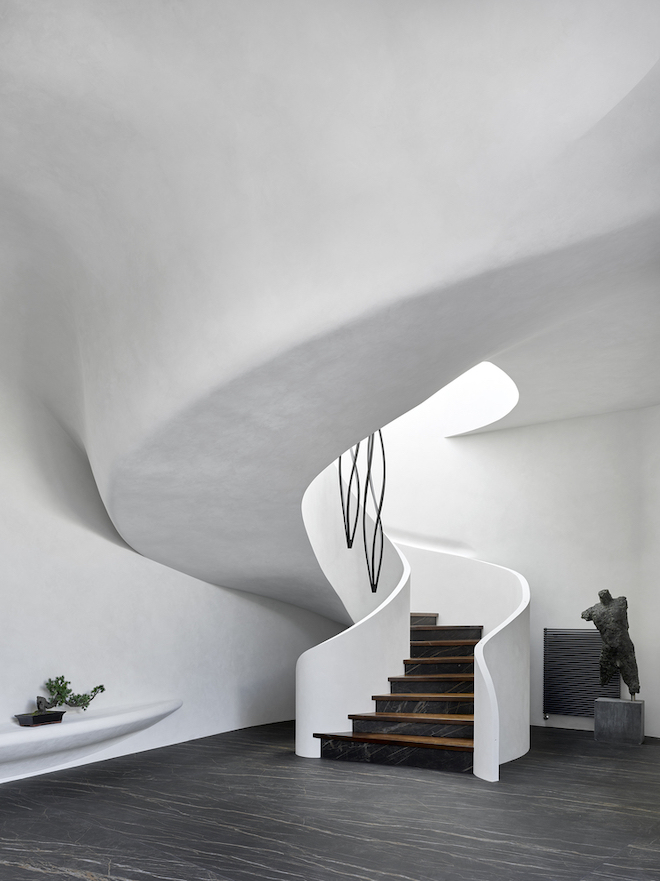 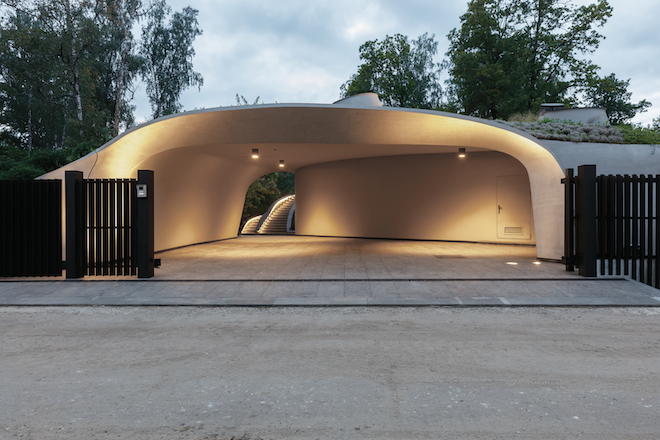 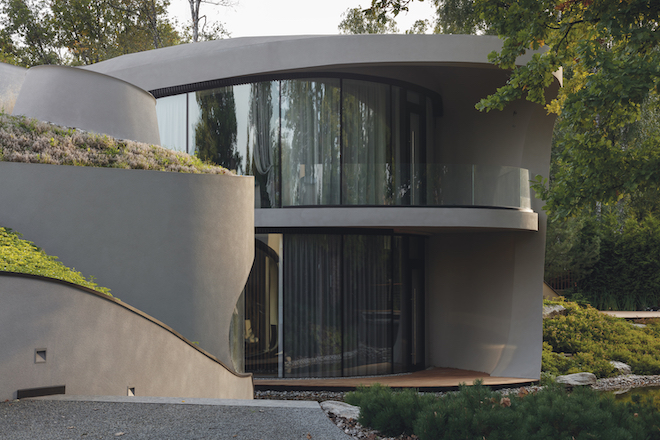 This natural light is further maximised by molded, frameless stained  floor-to-ceiling windows, bringing the outside in and keeping a constant connection between interior living spaces and its habitants and the outdoors. Featuring expansive views throughout the living room, dining area, a relaxation area,  three bedrooms and an office located on the second floor, all oriented to the plot, the windows also expand the living spaces to a terrace where a free-flowing infinity pool mimicking a natural body of water. 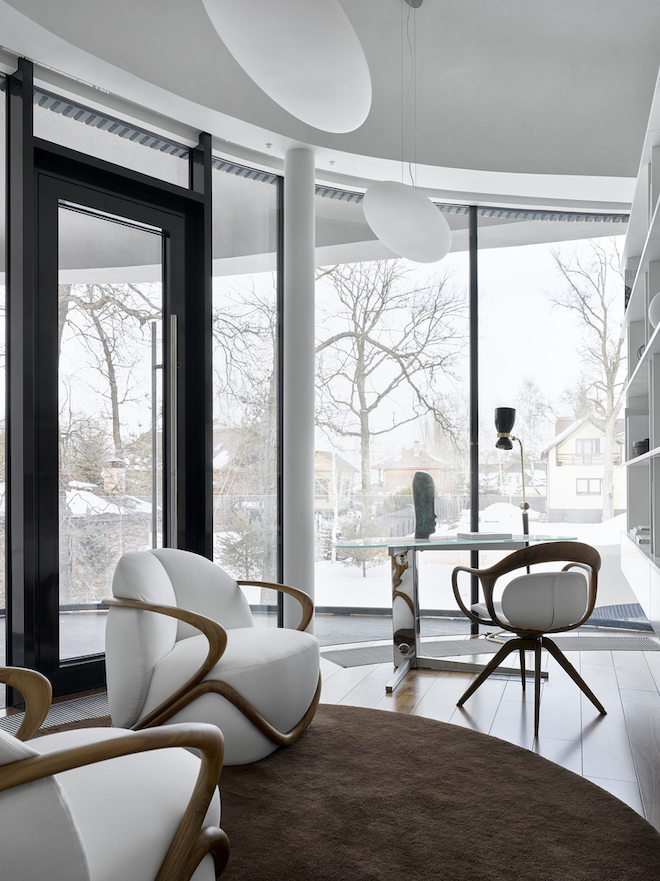 The interior is decorated with subtle Japanese influences, demonstrated through sculptural artworks, furniture and finishings emblematic and representative of the organic architectural influences which permeate the entirety of the luxury real estate.