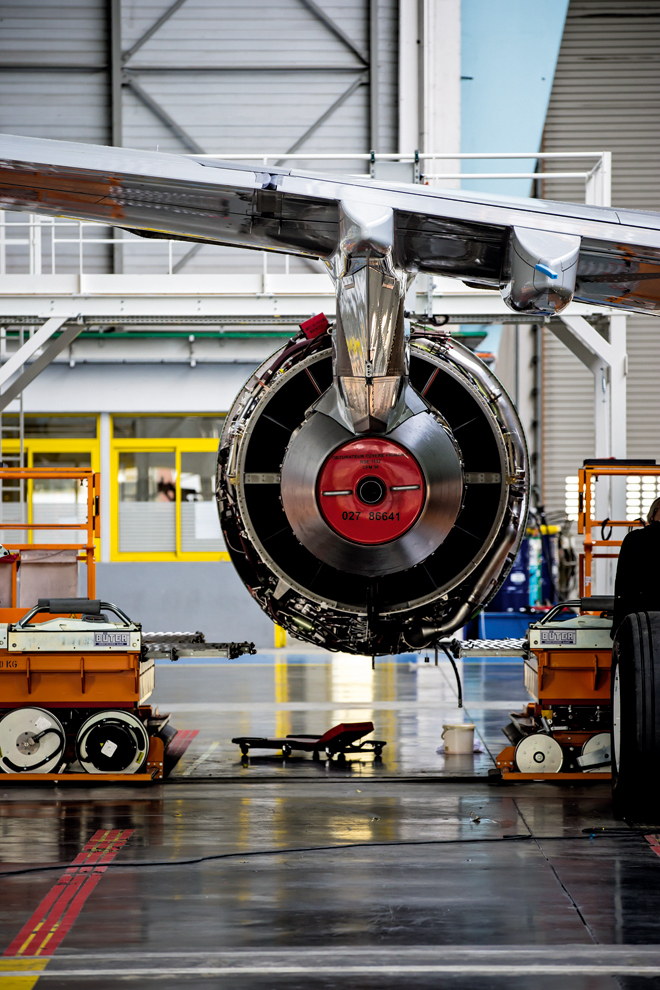 The second iteration of a collaboration between Richard Mille and Airbus Corporate Jets, the latest Richard Mille features an all new grand complication, one deeply linked to the exclusive world of bespoke private air-travel: a vibrating alarm with tourbillon from a Swiss watchmaker which has spent its lifetime designing timepieces to dampen shocks and vibrations from harsh G-forces. A ideal companion for global travel and daily wear, the new Richard Mille RM 62-01 Tourbillon Vibrating Alarm ACJ is emblematic of the Maison’s horological ethos of pushing the extremes innovation and performance. Just imagine, after years of watchmaking literature purporting the dangers of shocks and vibrations on tourbillons, Richard Mille has gone an incorporated a vibrating alarm into tourbillon watch exclusive for high flying, private jet owning clientele. 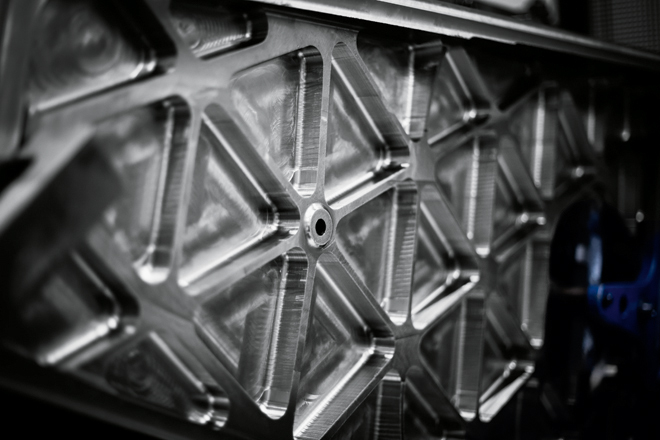 Understanding the demands for subtle, unobtrusive luxuries, Richard Mille had to design a mechanical alarm which could somehow meet its raison d’etre – able to alert its user yet discretionary enough that it wouldn’t announce its owner to an entire cabin of air travellers. Next, the owner’s tourbillon watch has to be able to maintain chronometry without being unduly affected by the harsh mechanical agitation of its alarm.

Transmitted exclusively by vibrations, its alarm function attests to the consideration and savoir-faire of the Maison. Rather than a hammer that creates a sound by striking a pillar, a gong or the interior of the case, the time signal is transmitted by a vibration only the wearer can perceive. 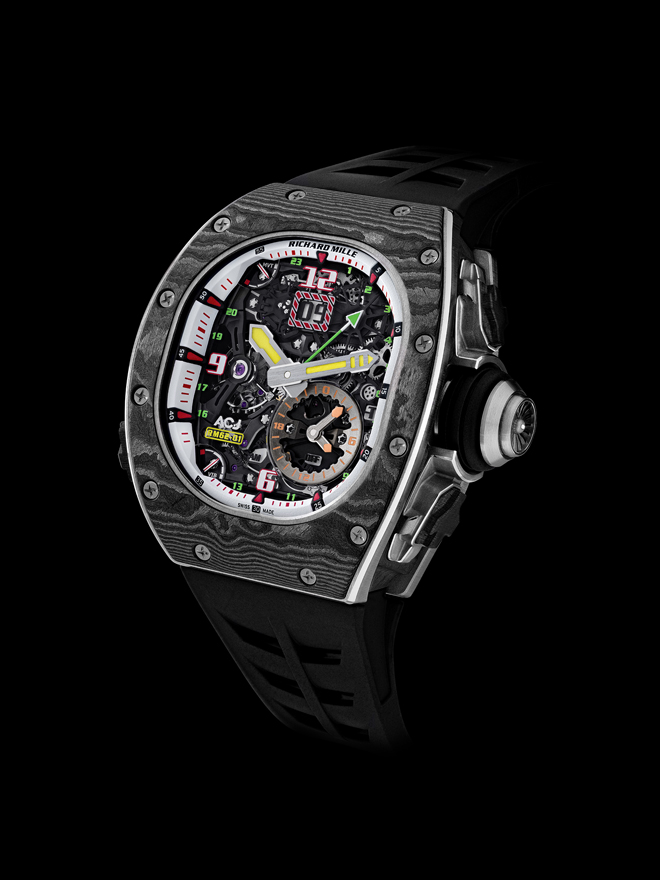 “We gradually moved up in frequency empirically at first, until we arrived at somewhere around5,400 rpm. ‘After that, a series of in-depth studies and several prototypes allowed us to make sure that this frequency would not cause resonance combined with other movement components.” – Salvador Arbona, Technical Director for Movements, on The secret to how the vibrations do not unduly affect the movement’s heart

Furthermore, the Richard Mille RM 62-01 Tourbillon Vibrating Alarm Airbus Corporate Jets was designed so as not to affect the watch movement, another major concern. The choice of titanium/ Carbon TPT® pairing provides an optimal weight to stiffness ratio in the functional context of the RM 62—01,  the tourbillon itself with free-sprung balance oscillates at 3Hz, rests on a baseplate of grade 5 titanium. ensuring that vibrations produced by the alarm are transferred to the wrist and deflected from the movement thus protecting its heart from vibrations. Ultimately, Richard Mille used an offset weight in solid gold, akin to an automatic rotor, inspired by the vibrating function of early generation mobile phones. However, consider that gold is inherently a soft metal, hence, subject to the type of forces required to accelerate it into rotation thus “vibration” it might deform and strike the movement, so a protected pathway created over the movement, insulating it.

The engineers at Richard Mille thus added security constraints to the functionality of this highly complex piece. Experiments made it possible to ensure optimal functionality coupled with an excellent long-term resistance of the movement.Regardless of when the wearer sets the time of day, or that of the alarm, the vibration may be interrupted at any time without causing damage.

It is considered the most technical Richard Mille watch to date, the culmination of over five years of R&D, designed by Salvador Arbona, Technical Director for Movements at Richard Mille but the alarm and its ‘insulation” isn’t the final masterstroke. To keep within space constraints and not have an unwieldy, unwearable watch, the grouping of the indicators and setting functions were conceived in a space-saving yet efficient manner while the “charging” of the alarm is done via pusher rather than crown. 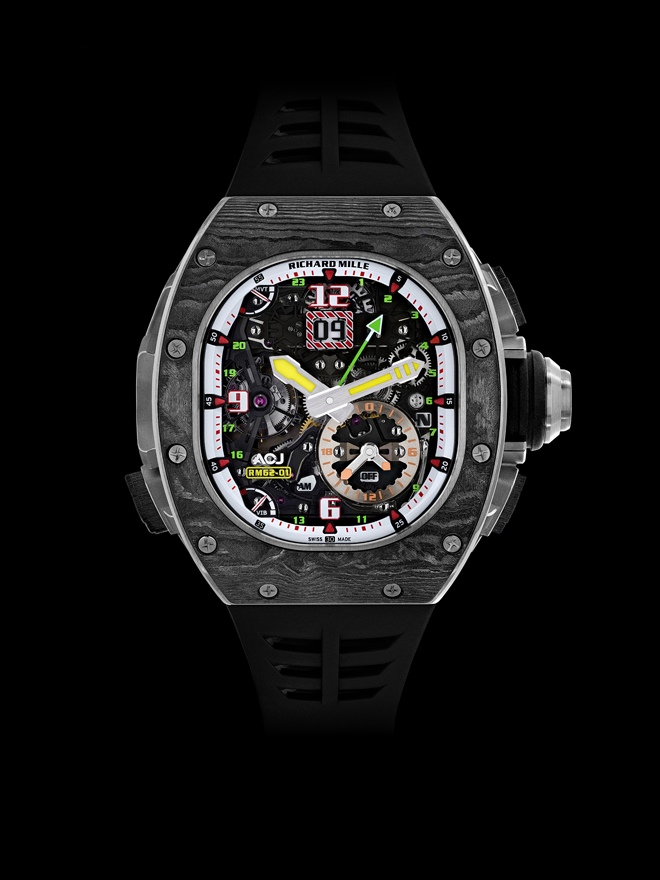