“In the Chinese language, the word ‘crisis’ (pinyin: wēijῑ) is composed of two characters, one representing danger and the other, opportunity.” So said John F Kennedy in campaign speeches before being elected US President and, more recently, Fabrizio Iarrera as the CEO of Monte Carlo Yachts outlined the company’s transition into its second decade. Although jῑ doesn’t directly translate as opportunity, the interpretation of wēijῑ as ‘danger-plus-opportunity’ has been widely used in Western politics, business and popular culture, especially in motivational speeches.

Iarrera used the phrase to help explain Monte Carlo Yachts’ remarkable first decade despite being founded in October 2008 in the wake of the global economic crisis, as he addressed yacht owners, business associates and media at a weekend of events in and near the company’s shipyard in Monfalcone, northeast Italy.

“We were dreaming of the new brand at a time of huge change for many of us, personally and in the economic environment, in which we saw an opportunity in the crisis,” said Iarrera, providing background to the brand’s current ‘new beginning’.

With the mighty Beneteau Group backing the venture, Iarrera had accompanied Carla Demaria as they left Azimut for Monte Carlo Yachts, the pair working side by side as the new shipyard grew from 20 employees in 2010 to about 400.

Yet in November 2018, almost exactly one decade after the company was formed, after it had made rapid headway in a luxury motor yacht market dominated by brands established over five decades, Demaria left. The departure of the founder and President of Monte Carlo Yachts signalled the end of the first act, with Iarrera stepping up as the new leader. 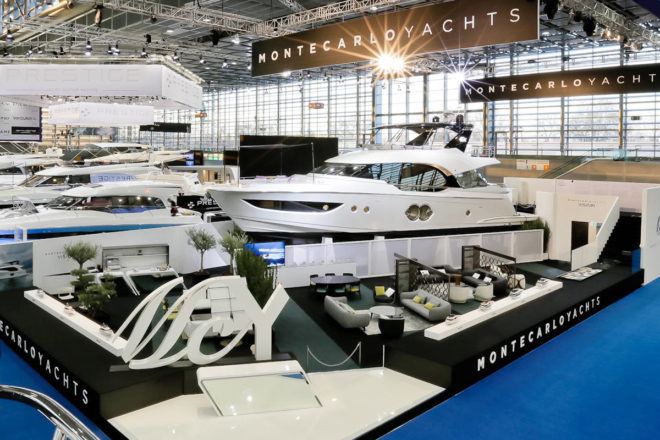 Monte Carlo Yachts’ second chapter was launched at Boot Dusseldorf with the world premiere of the MCY 70, which replaced the original yacht of the same name

Further continuity at leadership level was assured when Nuvolari-Lenard stayed on as the company’s exclusive design team. Beneteau Group, which announced almost €1.3 billion of turnover for 2017-18, was also quick to provide assurance that it would continue to support Monte Carlo Yachts as it had from day one.

Madame Annette Beneteau-Roux, who transformed the operation her grandfather founded in 1884 into one of the world’s biggest yachting conglomerates, even made a now-rare speaking appearance at Boot Dusseldorf in January as Beneteau Group heavyweights supported Iarrera in his first public appearance as Monte Carlo Yachts’ new leader.

And at the summer gathering in northeast Italy, Roux and several of Beneteau Group’s senior management, including new CEO Jerome de Metz, were present to support Iarrera as the brand unveiled the thinking behind its second generation of designs, before showcasing all three of its new models.

Iarrera was quick to emphasise that although the company didn’t release a new model in 2018, there was good reason. The year was spent fine-tuning the new generation of MCY flybridge motor yachts, represented by the launch of not one but three new models in 2019.

“This is the start of the second chapter and we’re concentrating on the new vision of Monte Carlo Yachts. We’ve been working on starting the second generation for the past three years,” the Italian clarified. “We started to think about evolution, in a consistent way, of what will come next. “Some of this has come from customer feedback, from owners of their first or second MCY yacht, as we continue to try to create the best house at sea. And we’re still backed by the Beneteau Group, the most storied, visionary company in our industry.”

Much of the strength of the Monte Carlo Yachts brand is the consistency of its yacht designs. Iarrera described Carlo Nuvolari and Dan Lenard as “the fathers of what we did in the first 10 years and what we’re still doing, and the best ones to explain our move from generation number one to generation number two”.

Nuvolari-Lenard is renowned for its superyacht designs, although it has worked on production yachts for multiple brands, including models from Beneteau’s own Monte Carlo and Gran Turismo series.

However, the duo’s role at Monte Carlo Yachts goes deeper than simply designers as they were strongly involved from the very beginning, and oversaw all seven of the first-generation models launched from 2010 to 2017, including the flagship MCY 105.

In contrast to many other brands, Monte Carlo Yachts is in no rush for radical new designs or innovations, preferring to trust the recognisable design traits in their ‘Future Classics’ and simply improve and evolve at a steady pace. 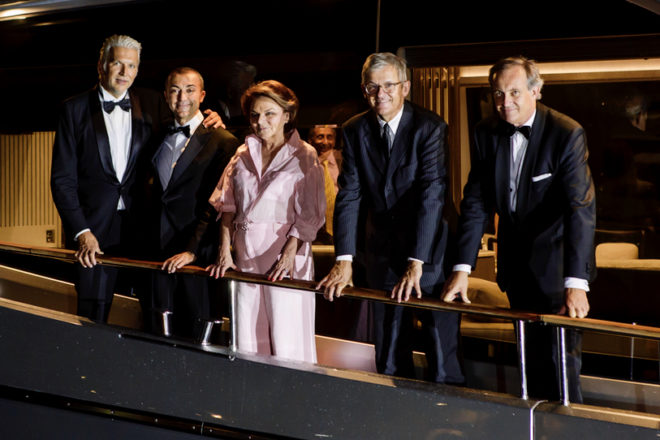 “Every great brand is based on great design,” Lenard said. “Our boats from 10 years ago are our ambassadors today. That’s pretty rare in our business.

“Recently, I see yachts demonstrating great indecision, like the designers were thinking ‘they did this, the other did that, so let’s take this and that and put it together’. And it becomes like fashion. Lots of those ideas won’t be here tomorrow, won’t be here in 10 years.

“What we wanted to do a decade ago was start with a clear idea, evolve it over time and always be recognisable, because we’re still using the same design language.”

Nuvolari, a naval engineer and architect, agreed that the pair strongly believe in perseverance and have avoided what he sees as panicking.

“Lately on the market, I see panic in a lot of product designs. You should not panic. We are following a precise idea we had 10 years ago and thought long and clearly about before proposing designs. And now we are evolving, but we are not leaving the past. We are confirming our ideas.” The MCY 76, 70 and 66 were then available for sea trials at Monte Carlo Yachts’ shipyard in Monfalcone

This was apparent at January’s world premiere of the new MCY 70, which replaced its namesake and showcased the same distinctive lines and hull shape of earlier models.

The same could be said for both the MCY 66 – the brand’s second launch of this year (Review, Issue 48) and successor of the MCY 65  as the range’s smallest yacht – and the new MCY 76, which again replaces its namesake and had its world premiere at this year’s Cannes Yachting Festival.

However, the yachts have changed in many ways, with new hulls, decks, layouts and superstructures developed to increase floor area and volume. As an example, the flybridge on the new MCY 66 is the same size as the one on the former MCY 70.

New propulsion systems have opened up both space below and performance options, the placement of fuel tanks has changed, while ongoing advancements in technology are reflected throughout the new models.

One of the most notable and important changes has been the increase in natural light through larger windows and other means, such as reducing the height of furniture. 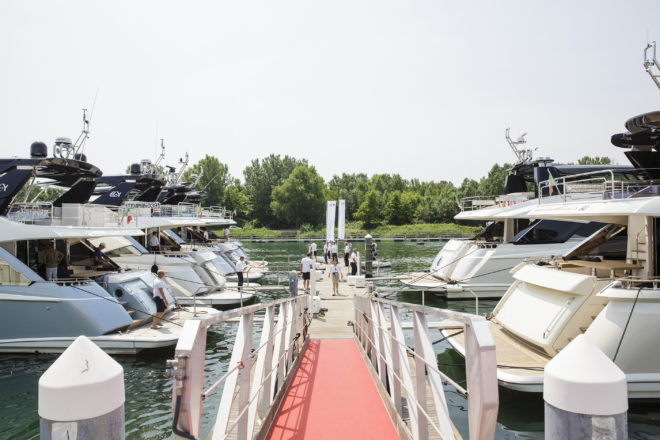 All three second-generation models (to the left) were recently available for sea trials at Monte Carlo Yachts’ purpose-built shipyard in Monfalcone, which has 40 berths

Iarrera said more light and a closer connection to the outside was among the most common feedback from owners of MCY’s first generation of yachts. Fittingly, the spectacular showcase of the three new models at Portopiccolo marina was entitled ‘A Tribute to Light’.

“We’ve increased the amount of light dramatically,” Nuvolari admitted. “Boating is moving this way. People want to see more, not ‘shelter’ in a boat. This is the same with house architecture. And increasingly the future will be boats enjoying beautiful destinations, not private parties in marinas.”

Owners testified to the dramatic changes in the space and light offered on the new models, with one adamantly stating: “When I went on the new MCY 70, I could have sworn it was the new 76. I have the first MCY 70 and there’s no way I thought this was the new version.

“The windows are so much bigger, as well. When I was standing in the middle of the saloon, I felt like I could have jumped into the ocean.”

However, Monte Carlo Yachts did reveal a design departure of sorts when it announced that it was developing enclosed-flybridge versions of its three new models, primarily for the US market. 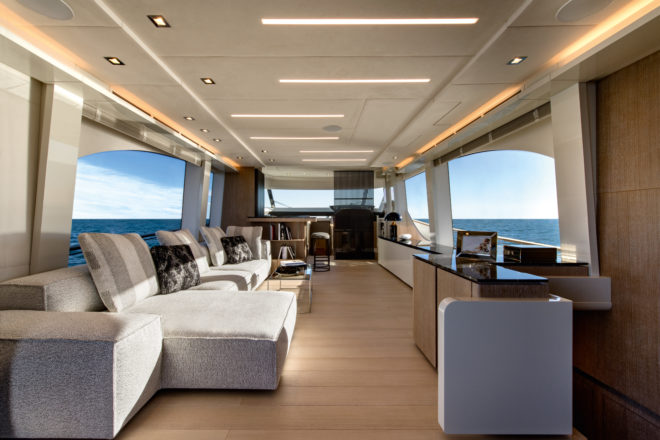 The interior of the new MCY 70, which ushered in the new focus on increased natural light

The yard said it hoped to reveal the enclosed flybridge version of the MCY 70 at the Miami Yacht Yacht Show in February 2020, while admitting it had room to grow in the US market, which accounts for about 20 per cent of its sales, behind Europe (40 per cent) and Asia (30 per cent).

As well as the Nuvolari-Lenard designs, Monte Carlo Yachts’ strongest assets include its groundbreaking modular construction process and its purpose-built 45,000sqm production facility, situated on a waterfront site that includes a main production shed, a 60m-long painting booth-cum-oven, a 175-tonne travel lift and 40 berths.

Modular construction involves the hull, lower-deck interior and main deck/superstructure being developed separately and simultaneously, then assembled by using an automated lifting jig to lower the interior into the hull, then the superstructure on top. The speed of construction can be astonishing, with the first MCY 66 completed two months after the fibreglass hull arrived at the shipyard.

However, there are significant changes afoot as Monte Carlo Yachts’ second chapter also includes the addition of a second brand to be built at its shipyard, starting from September. The MCY 66 was the yard’s second new release of 2019, succeeding the 65 as its smallest model

For starters, there are synergies between MCY and its new ‘shipyard sister’ in terms of yacht sizes, as CNB has built over 120 sailing yachts from 60-120ft since it was founded in 1987.

There are also similarities between the brands’ need to work closely with customers on requests for detailed customisation, including paint, types of wood, leathers and other materials, deck layouts, furniture and more.

In fact, MCY clients are invited to visit the Nuvolari-Lenard office, about 1½ hours’ drive from Monfalcone, to see the design ideas and exclusive materials on offer. As Iarrera emphasised: “At Monte Carlo Yachts, luxury means the individual is at the centre of our life. When an owner comes to Monte Carlo Yachts, they’re the boss, not me.”

Like Iarrera, Masselot said he’s very optimistic about the new collaboration, which is certainly a new chapter for CNB, now in its fourth decade. “When we were discussing a move, we realised there was only one shipyard in the Beneteau Group sharing the same DNA as CNB, and that was Monte Carlo Yachts,” said Masselot, who said he will remain based in France.

“The Monfalcone shipyard also has more in common with CNB than we thought. CNB yachts are also built the same way, using modules. In terms of the construction process, it’s very similar. It’s also a highly skilled workforce at Monfalcone, with a passion for high-quality, high-tech yachts, like in Bordeaux.

“Also, 80 per cent of CNB yachts cruise in the Mediterranean, so it’s much easier for us to deliver yachts from the Adriatic Sea, close to where our customers cruise. I personally think these French-Italian synergies will be great for our two brands, so I’m very optimistic.”

Following Beneteau Group’s acquisition of Polish builder Delphia and creation of the Excess catamaran brand, Monte Carlo Yachts and CNB are now among its 12 yachting brands in the conglomerate, which has long been established as the market leader in sailing monohulls and sailing multihulls due to the likes of Beneteau, Jeanneau and Lagoon.

The Group states that in powerboats it’s the market leader from 30-60ft, second up to 30ft and fifth from 60-110ft, which covers the Monte Carlo Yachts range and Prestige’s larger models.

Iarrera predicted that the shipyard would produce 20-25 units this year, which is some way behind the market leaders in this segment, but that’s not a crisis for Monte Carlo Yachts. It’s an opportunity.