Headed by the world premiere of the 111m Lurssen Tis (see REVIEW, Yacht Style Issue 49), the line-up of 125 superyachts at the 29th Monaco Yacht Show was the largest and most voluminous since the show started in 1991. 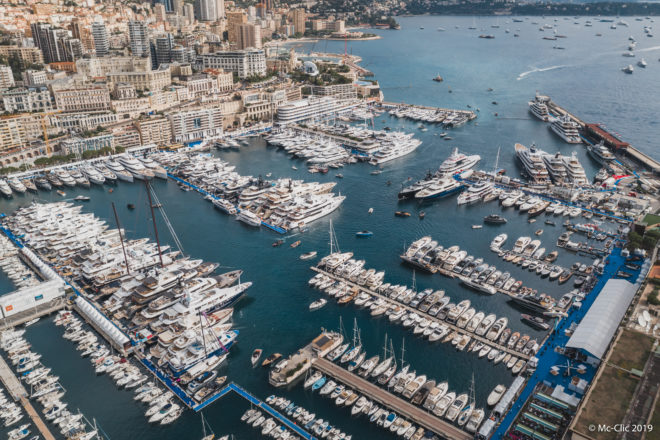 The total worth of superyachts on display inside Port Hercules was estimated at around €4 billion (about US$4.4 billion), with an average asking price of motor yachts available for sale of €37.8 million (about US$41.8 million), according to analysis by SuperYacht Times.

The four-day show featured 600 exhibitors and attracted 31,565 visitors, up from 30,400 in 2018. The MYS private concierge service invited 211 VIP visitors, the majority from the US, Russia, UK, China and India, and connected them with the show’s exhibitors, prompting over 50 yacht visits.

On the eve of ‘The World’s Leading Superyacht Event’, Tis was among three spectacular 2019 models to be honoured at the sixth Monaco Yacht Show Superyacht Awards Ceremony, which was held at the Yacht Club de Monaco and attended by 350 VIPs.

The Lurssen build won the Interior Design Award, “for the palatial classical interiors recreated by Winch Design and inspired by iconic hotels and residences around the world”, according to judges. 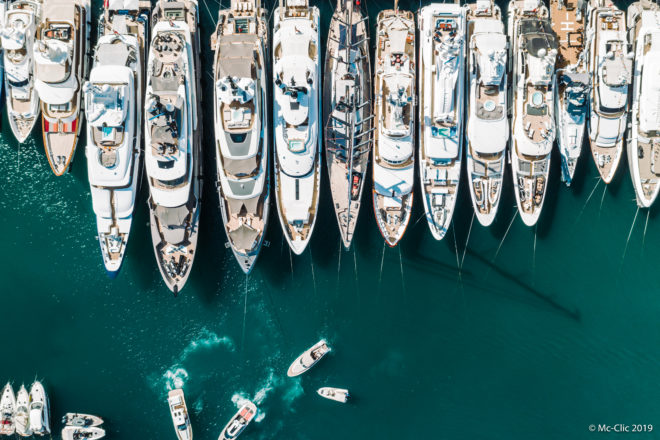 The Monaco Yacht Show’s attendance rose to 31,565, with the MYS private concierge service inviting 211 VIP visitors, the majority from the US, Russia, UK, China and India

Sanlorenzo’s 64m Attila, the Italian shipyard’s largest build, won the MYS / RINA Award, having been distinguished as the show’s eco-friendliest superyacht according to the environmental standards established by the Italian classification company RINA.

However, the night’s big winner was the futuristic 80m Excellence, built by German shipyard Abeking & Rasmussen, with an exterior and interior by Winch Design. Excellence first collected the Exterior Design Award, “for her striking bow and visionary disrupting layout; she will certainly bring forward a new era for superyacht design”.

The American-owned megayacht later collected the Finest New Superyacht Award, the evening’s final prize and the most prestigious of the ceremony, as judges praised “this new masterpiece of futuristic exterior shapes and modern interior design”.

The winners were selected from 18 nominees, chosen from the 44 world premieres at the four-day Monaco Yacht Show, which started the following day. Imperial was kept busy as the representative of Amadea, a 2019 Lurssen build designed by Espen Oeino (exterior) and Francois Zuretti (interior) and put up for sale by its original owner. The Monaco-based brokerage had a busy show, also representing the 52.3m Amels Grace, 46m Palmer Johnson Hokulani and 50m Mangusta Rush.

After Tis and Amadea, the longest yachts in Port Hercules were the 90m Phoenix 2, a 2010 Lurssen build, and the new 90m Oceanco Dreamboat, located at the far end of Quai Rainier III, in front of Amadea and the new 85m Bold from Australia’s SilverYachts, the show’s fifth-longest yacht. 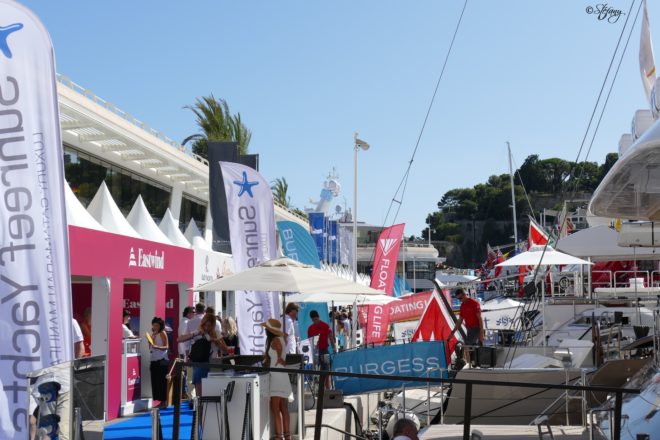 Yacht builders and brokerage houses were out in force at the Monaco Yacht Show, which featured 600 exhibitors

As well as CRN, other Ferretti Group brands represented in Monaco – where the conglomerate staged its lavish Private Preview in early September – included Riva, showcasing its 50m flagship Race, and Custom Line, which showed a Navetta 42 and a 106’, a model that also displayed at the Cannes Yachting Festival two weeks earlier.

The Group also took the chance to announce upcoming projects including the 165 Wallypower designed by Espen Oeino, the Riva 130’ by Officina Italiana Design, and Custom Line’s 140 designed by Paszkowski and its Navetta 48 in collaboration with Filippo Salvetti for the exterior and Antonio Citterio and Patricia Viel for interiors. 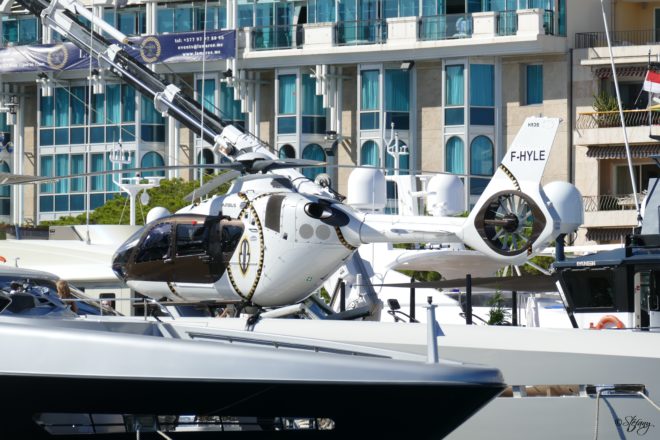 Helicopters show why Monaco is ‘The World’s Leading Superyacht Event’

“Following the wave of success of Cannes, gliding towards Monte Carlo is a great pleasure, which becomes immense when you can announce unique projects such as the 165 Wallypower, the result of the wonderful minds of Espen Oeino and Luca Bassani, news that excites all enthusiasts of innovative and disruptive boating,” said Alberto Galassi, CEO of the Ferretti Group.

“Thanks to these injections of creativity, Ferretti Group is growing with splendid continuity, in terms of size and prestige, in harmony with our boats, which are getting bigger and bigger, and more and more beautiful. The large-yacht segment is one of those that is giving us the most satisfaction.”

Benetti’s largest yacht on display at the Monaco Yacht Show was the new 64m Metis (see REVIEW in Yacht Style Issue 50), featuring unusual angular interiors by Bannenberg & Rowell and an enormous owner’s suite featuring two double cabins, and his and hers bathrooms. The Italian builder also showed a Mediterraneo 116 (Big Five) and a Delfino 95 (Eurus), both also 2019 launches.

Sister company Azimut showed its new Grande S10, which had its world premiere at Cannes earlier in the month, as well as a Grande 32 Metri and Grande 35 Metri. 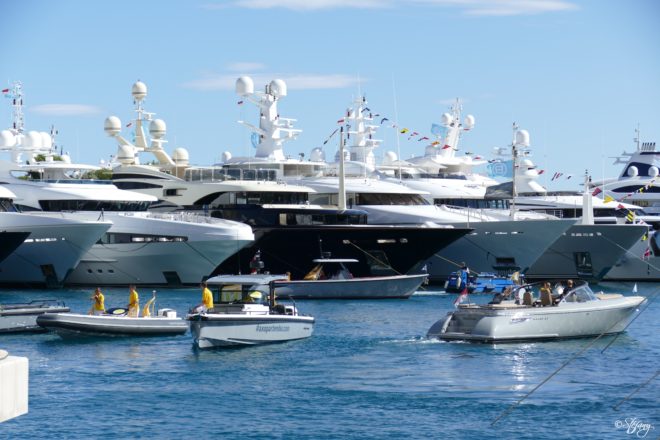 The Monaco Yacht Show was awash with small-boat activity, with shuttles transferring visitors around the port and private tenders serving individual yachts

Marco Valle, CEO of Azimut, said: “The Monaco Yacht Show  is of fundamental importance for us, especially for the central role that the [Azimut-Benetti] Group occupies in the superyacht segment, and comes after the resounding success of the Cannes Yachting Festival and the positive debut at the Genoa Boat Show.”

Turkey’s Bilgin Yachts presented the 47.5m Lilium, which had debuted at Cannes and is the sister ship of Starburst III. The yard also announced upcoming projects of 80m and 85m, which it said will be the largest yachts to be built in Turkey to date.

British yard Sunseeker, which has delivered 137 units over 100ft since 2000, had three superyachts on display: a newly delivered 116 Yacht, Mr K Iriston, and two 131 Yachts, Sonishi (2019) and Zozo (2016). Polish catamaran builder Sunreef showed the first 80 Sunreef Power, Aria, which it had premiered at Cannes.