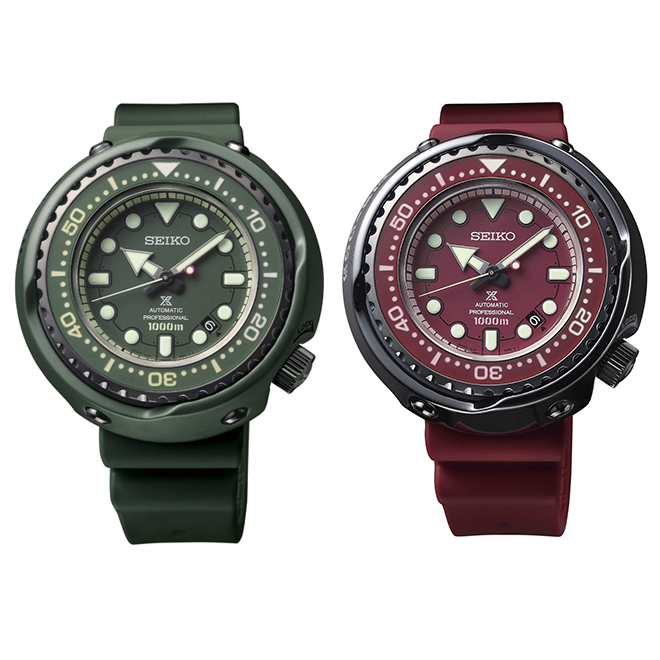 One of the world’s most distinctive diving watches just got even bolder, and has very impressive names to boot. The Seiko Mobile Suit Gundam 40th Anniversary Mass Production Type Zaku II Limited Edition (SLA029J1), and Seiko Mobile Suit Gundam 40th Anniversary Char’s Zaku II Limited Edition (SLA031J1) are honest-to-goodness mouthfuls. In the interest of brevity, we’ll be referring to both watches by their reference numbers, even though we know that watch brands and collectors both have strong opinions on that practice (turn to the last page for more on that). To get the obvious out of the way, both watches are inspired by the classic anime Mobile Suit Gundam, or Gundam for short.

On that note, both watches are also informally known as “Tuna” models, and collectors will be aware that the models will have different names and references in Japan, if you are so inclined to discover. As of June, the Gundam editions were not listed on the international version of the Seiko website, but they are present on the Japanese site. For the moment, the watches are available in Singapore, and that’s good enough for us. There’s actually a third watch in the mix but since that’s Spring Drive, we’ll consider it for another issue; it is also coming out a little later this year.

Back to matter at hand, since both “Tuna” watches have the same functional characteristics, we’ll address the similarities first. As proper professional watches, these tickers are water resistant to 1,000 metres; use automatic calibres (calibre 8L35); have titanium and ceramic outer case protectors; are cased in titanium; and have unidirectional rotating bezels. No doubt purists will always be pleased to learn of Prospex models that are not veering away from titanium, and that’s certainly the case here. Aesthetically, both watches maintain the fundamentally asymmetric look that defines the Prospex collection.

SLA029J1 is in military green because it is inspired by the “mobile suit” or “mech” of the Principality of Zeon. SLA031J1 on the other hand takes on the colours of Char Aznable’s personal “mobile suit,” and also features his personal crest. The counterweight of the seconds hand evokes the monoeye sensor of the aforementioned “mechs” of the Principality of Zeon. For our money, SLA029J1, is the more flexible option, being in-line with recent green and military trends in popular watches. SLA031J1 definitely makes a statement, but this is a 52.4mm watch that is 17.2mm thick so it is going to have a lot of wrist-presence no matter what.