Leopard Catamarans will stage the world premiere of its new 53 Powercat in Miami in February. The first two units are scheduled to arrive in Fort Lauderdale in January following delivery from Cape Town, where Leopard’s yachts are built by Robertson and Caine. 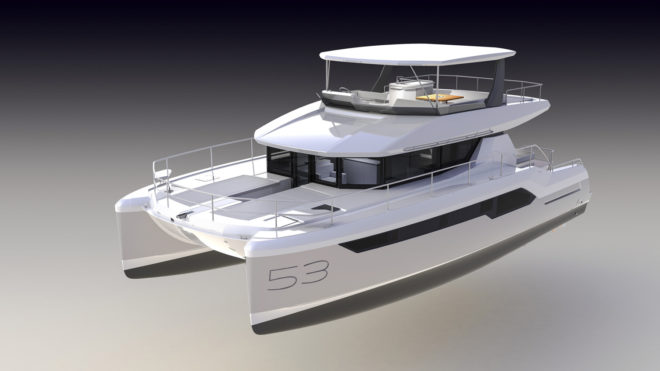 The model will be available for private customers, including in Asia through a network of dealers, and for charter through The Moorings’ power yacht fleet.

The 53 PC marks Leopard’s fourth generation of power catamarans since 2002 and succeeds the 51 PC, which the brand describes as the most successful powercat of all time, with over 135 units sold.

“The Leopard 53 Powercat is not just a replacement of the previous model but an evolutionary change in the Leopard powercat range,” said Franck Bauguil, Vice President of Yacht Sales and Product Development. “This completely new boat is designed to please the existing Leopard owners and Leopard fans, and also appeal to the more traditional motor yacht market, with a modern, reimagined interior that offers the comforts of home as well as plenty of outdoor entertaining space.

“Combining this with the smart, economical advantages of catamaran design, she is easy to maintain and operate, and up to 50 per cent more fuel efficient than her monohull motoryacht counterparts. The Leopard 53 Powercat is the best of both worlds.”

The design maintains the hulls’ narrow entry at the bows, with big-volume stepped hulls above the waterline creating large interior spaces down below. The yacht is expected to have a top speed of 25 knots, a cruising speed of 17.5 knots and a range of 2,000 miles. Leopard catamarans are built by Robertson & Caine in Cape Town

Design highlights include the hardtop flybridge, which has a helm station to starboard and large seating areas, offering panoramic views and entertaining space.

On the main deck, the large aft cockpit has a table and walk-around seating. Retractable sliding glass doors lead from the cockpit to the galley, while the saloon offers an L-shaped lounge to port, a two-person settee to starboard and access to the foredeck through a forward door. The model offers the option of an interior navigation station.

Layouts include a three or four-cabin layout, with the option for separate crew cabins. The owner’s suite in the three-cabin version has a large, walk-around bed, walk-in closet and a double vanity.

The Moorings, founded in 1969, is one of the world’s biggest yacht charter companies, offering bareboat yachts, all-inclusive luxury crewed yachts with Captain and chef, and power yacht charters throughout the world.