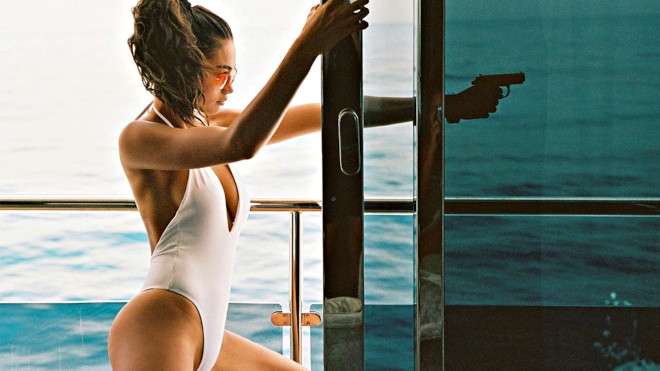 Bamba (pronounced Bum-ba) is an Australian swimwear label that takes muse from the 1980s when women (I’m looking at you Jane Fonda) were heavy into the high-rise, cheeky cuts and bold colours and accentuate their “got-it-flaunt-it” assets. What better way for Bamba to launch their Spring Summer 2020 swimwear collection than channeling the visuals of yet another 1980s icon – The James Bond franchise.

Leveraging on the exotic Indian and Australian looks of Kelly Olivia Gale, the famed Victoria’s Secret model emoted the vibe and demeanour of the quintessential Bond Girl, expertly and gratuitously captured by lensman Cameron Hammond. Bamba swimwear is not something we usually cover on LUXUO but when Kelly Gale gave her 1.3 million Instagram followers a sneak peak over the weekend, it sent a surge of pulses racing and a ton of search traffic to the Bamba website. Dressed in a sensuously cut, white one piece, Gale definitely  “on a mission.” – her Insta caption. Revealing white Bamba one-piece in contrast to her golden brown tan, the Bamba swimsuit boasting thin straps tied halter-style behind her neck indeed lives up to the Aussie brand’s ethos of accentuating assets, showing off Gale’s toned arms and shoulders to great effect.

Cameron Hammond is as talented as he is prolific, having shot for international titles including Conde Nast’s Travel + Leisure over the span of his career but his special skill it appears is exquisitely capturing the essence and magnificence of the female form. Previously a television cameraman, Hammond became envious of the creative freedom that fashion photographers possessed and decided to teach himself photography by referencing fashion editorials – the technical aspects weren’t too difficult, says Hammond, figuring it out as he experimented with his father’s old SLR.

The result of Kelly Gale’s shoot for Bamba swimwear Spring Summer 2020 aren’t too shabby. If we dare say, they’re absolutely breathtaking. Spearguns and the yacht lifestyle has never looked this good. Whether shaded in silhouette toting Bond’s signature Walther PPK or manifesting her chocolatey striking good looks and physical perfection in view of the sun and surf, this campaign is one to be remembered.