New Zealand’s Stewart Island is a long way from most places. In fact, it’s a mission just getting to the island known in Maori as Rakiura, which is situated south of the iconic South Island and was recently home of the Asia-Pacific in-water release of Jeanneau’s Merry Fisher 895 Marlin. 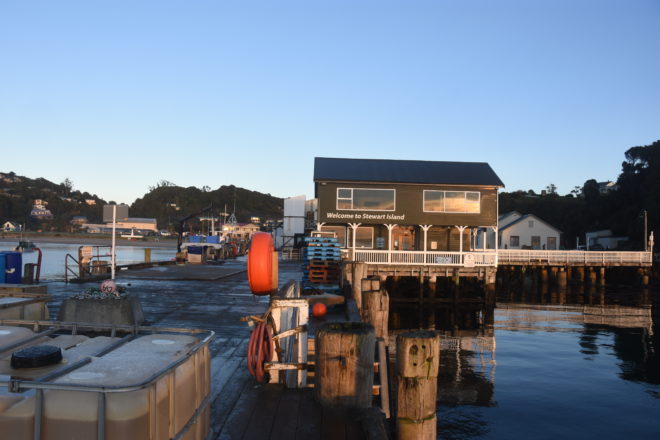 Stewart Island is New Zealand’s third-largest island, but only about 400 people live there

Travelling to Stewart Island from Hong Kong, for example, starts with an 11-hour flight to Auckland, then two internal flights – and that’s just to reach Invercargill, near the southern tip of the South Island. From Singapore, it’s just two flights to Invercargill, transiting at Christchurch.

From Invercargill, it’s a taxi or bus ride to the southernmost town of Bluff and then finally an hour-long ferry crossing to Oban on Stewart Island. Weather permitting, the ferry makes two return trips to the island each day, morning and evening, while a water taxi service is also available, again depending on the weather.

Sitting 46-47 degrees south – on the same latitudes as the southern reaches of Chile and Argentina – the 1,746sqkm Stewart Island is separated from the South Island by the notorious Foveaux Strait, a treacherous, 30km-wide stretch of water that ensures Rakiura remains relatively isolated. There’s very little else around it and if you were to head south across the Southern Ocean, your next stop would be Antarctica. 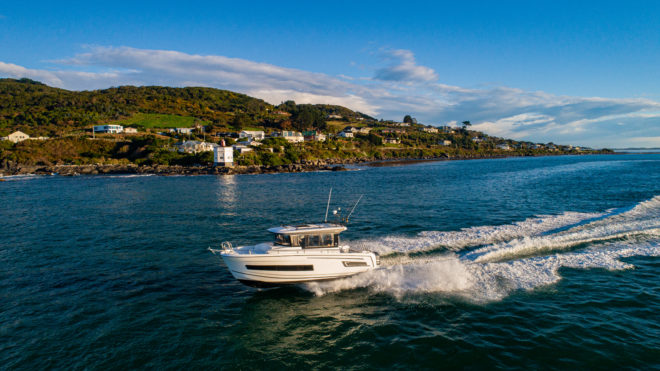 Getting a new Merry Fisher 895 Marlin to Stewart Island was also an adventure. One of the latest models from prolific French builder Jeanneau, the boat was cast to play a starring role in an episode of the popular television series Fish of the Day, which screens in more than 80 countries and is now also available on National Geographic’s People channel, further extending its reach.

Having arrived in Auckland from the Jeanneau facility in Poland two months earlier for an on-land display at the New Zealand Boat Show, the sport fisher was carried almost 1,700km down the length of the country on a road transporter, including crossing Cook Strait on an overnight ferry between the North and South Islands.

After a two-day journey, the yacht was then splashed for the first time as it was launched into the chilly waters of Bluff Harbour before it motored across Foveaux Strait to Halfmoon Bay, where the crew picked up a mooring in a sheltered cove close to the island’s commercial wharf at Oban.

FISH OF THE DAY

The 895 Marlin was the latest vehicle for Fish of the Day presenter Clarke Gayford, also well known as the fiancé of Jacinda Ardern, New Zealand’s Prime Minister. The wife of the US President is called ‘America’s First Lady’, so Gayford is sometimes jokingly referred to as ‘New Zealand’s First Man of Fishing’. 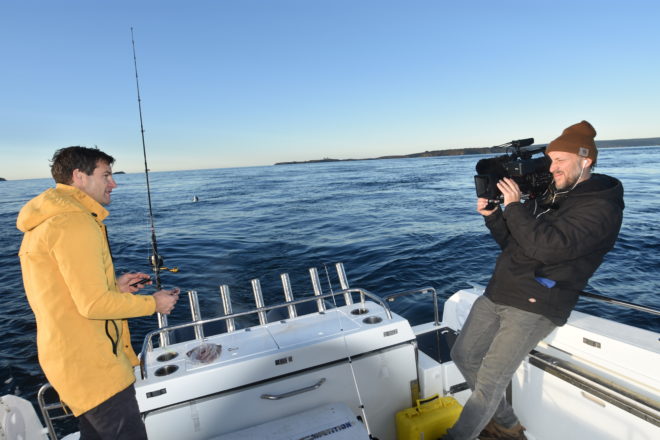 A passionate sport fisher, Gayford is also an environmental advocate deeply invested in caring for our oceans and all the creatures that live in it. Along with Fish of the Day Producer-Director Mike Bhana, Gayford has partnered with Jeanneau, using its boats to access exotic locations all over the world and film the series.

Almost 9m-long, the Merry Fisher 895 is a full-bodied, walk-around vessel with generous accommodation for up to six. It has a comfortable, spacious wheelhouse, an enclosed toilet and shower, a second cockpit shower and cooking facilities, making it suitable for family days and overnighters.

The Marlin layout is fishing-oriented and ideal for sport fishing adventures. Twin Yamaha 225hp V6 outboards provide 40-knot performance, while clever use of space has resulted in a large, clean cockpit for fishing, diving and water sports. There are plenty of rod holders, a wash down, live-bait tank and a generous wet locker under the cockpit sole. 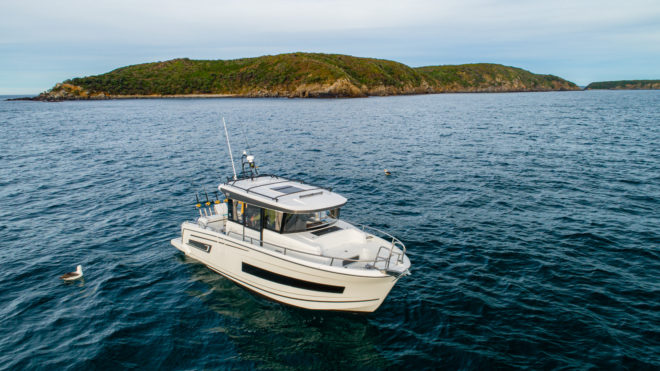 Gayford was full of praise for Jeanneau’s new 895 Marlin, having also worked on the 795

Folding seating and a drop-in table cater for al fresco entertaining or relaxing outside, and the table can also be mounted on the foredeck, which has wraparound railings and is also a great place for fishing – or launching a drone for filming!

The wheelhouse is slightly offset to port while the helm station is starboard side, where a sliding side door affords the driver quick access to the side deck, very handy when securing lines or coming alongside.

This model has two ‘oversize’ 300-litre fuel tanks, allowing multi-day expeditions like our Stewart Island adventure. Petrol is not available at the wharf on Stewart Island, so the crew had to be confident they could carry enough for three days of fishing and filming, plus two crossings of Foveaux Strait.

In the previous Fish of the Day series, Clarke and his team had used the smaller Merry Fisher 795 for several programmes in New Zealand, enjoying the boat’s combination of space and fishing facilities, but the host thought the new 895 Marlin better still. 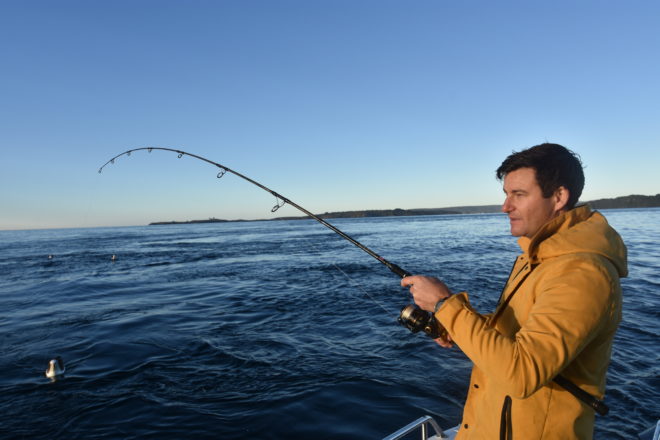 “It’s just that much bigger again, with a larger cockpit,” Clarke said. “It’s really stable, which is great for filming, and there’s an amazing amount of space in the wheelhouse and below decks. We carry a mountain of camera and sound gear, along with fishing tackle and dive gear, but the 895 swallows it all.”

Fish of the Day takes Clarke and crew around the world, including Asia, the Pacific and North America. It has a simple premise: set out to catch a particular fish, local to the region, cook it and eat it.

Gayford shares his journey of discovery with the show’s viewers, before presenting his fish to a local chef who prepares it in local fashion. The dish is then enjoyed by the TV crew and, vicariously, the viewers. And for this spectacular episode, Stewart Island proved a dramatic setting with fish aplenty. 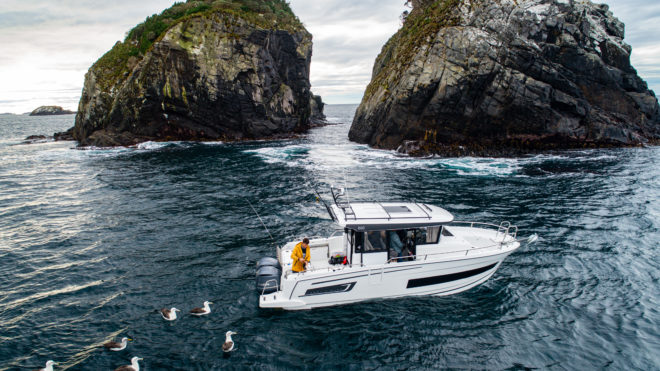 The Merry Fisher 895 Marlin was the vehicle for one day’s filming and the target that day was trumpeter, a popular table fish with Stewart Island locals. Rakiura trumpeter grow to around 10kg, but any fish over 2kg is a good one. Trumpeter are known for fighting hard on the line, but the first challenge is hooking them, as we found out.

To someone who hasn’t experienced fishing in this part of the world, the best way to describe it is frenetic. Bites are instantaneous and multiple hook-ups common. However, everywhere we went, blue cod were so abundant that they snaffled our baits and lures long before the target species could be tempted. 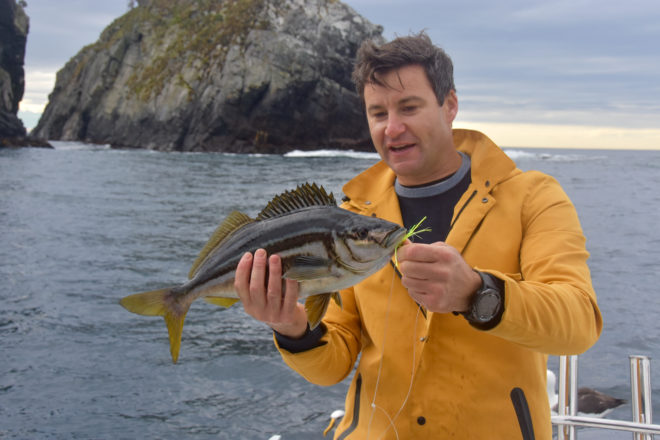 Clarke with the designated ‘fish of the day’, trumpeter, which took a while to find

Great to eat, blue cod is the island’s most popular catch, also with commercial fishers who use baited pots. Stewart Island’s cod are rated among the best tasting of all and visitors can enjoy them at the South Sea Hotel and various other restaurants on the island.

Next in popularity is the trumpeter, but unlike blue cod, it’s not found everywhere. Local fishers generously shared their knowledge of where to fish for them, but they still weren’t easy to catch. Eventually, though, we enjoyed some success, putting several modest specimens on ice.

Stewart Island is also famous for its paua, a large blue/black-footed abalone native to New Zealand. Stewart Island paua grow large, almost as big as dinner plates, and are plentiful. Clarke free-dived a half-dozen fat paua to accompany the trumpeter, along with a few super-sized kina (sea urchins), some of which we devoured straight out of the water.

While collecting shell fish, Gayford made friends with a curious octopus and was continuously surrounded by fish including greenbone, wrasse and trumpeter, which had finally proved not so elusive. 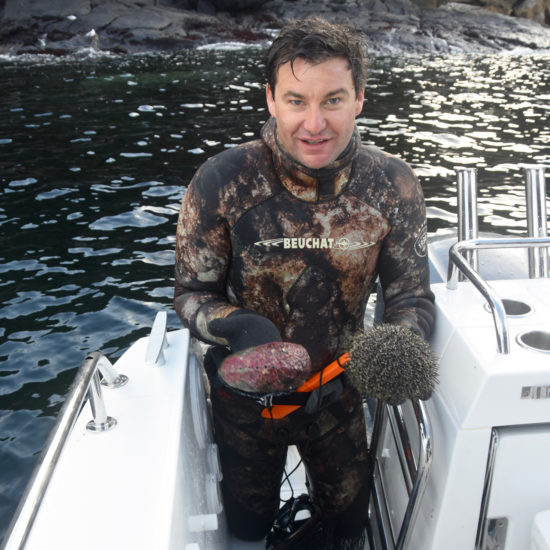 Gayford in the water collecting paua and kina; lobsters are also common

Winter days this far south are short, so our fishing and diving adventure wrapped up well before 4pm. With the light fading and the temperature falling fast, the Merry Fisher’s cosy wheelhouse was welcome during the long run back to Halfmoon Bay.

For cruising yachts, visiting Stewart Island is usually part of a more extensive cruise taking in the magnificent fjords of southern New Zealand. Crossing the Foveaux Strait is best reserved for calm conditions, but once made, boaters are spoiled for choice. There’s so much coast to explore and as much solitude and unspoiled nature as anyone could wish for.

Visitors coming by sea can expect to see several species of albatross in large numbers, giant petrels and other Southern Ocean seabirds, as well as seals, penguins and whales. The island’s convoluted coastline has miles of pristine white beaches, wide bays, secluded coves and deeply indented natural harbours. These provide safe anchorages and shelter from the fierce gales that periodically blow in off the Southern Ocean. 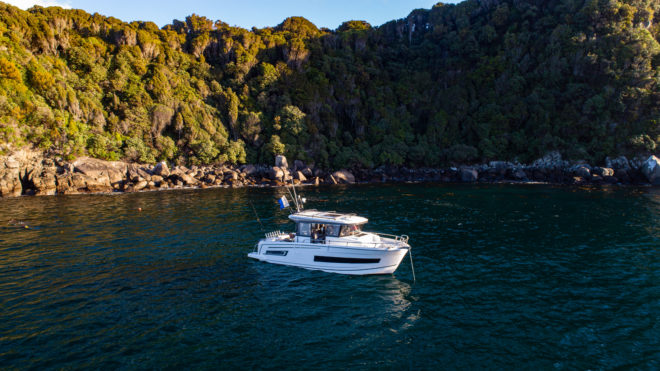 And then there’s the wildlife. Guided tours of nature reserves such as Ulva Island, with its thriving populations of native birds, are popular with visitors, but there is also plenty for independent travellers to see, including beach-loving kiwis. Kiwis are normally nocturnal, but the Stewart Island sub-species often walks about during the day and is the only kiwi to frequent beaches to feed.

Walking tracks, including the Rakiura Great Walk, traverse the whole island, taking in the stunning coast and forested interior. Many are furnished with cosy huts, used by hunters as well as walkers, but bookings are essential. Cycling tours are also popular.

Camping is possible at a few locations, but facilities are basic and bookings may be required. In addition, there is a variety of backpackers and lodge-style accommodation on the island. The South Sea Hotel is a popular choice with visitors, offering comfortable accommodation, a lively bar and a restaurant. 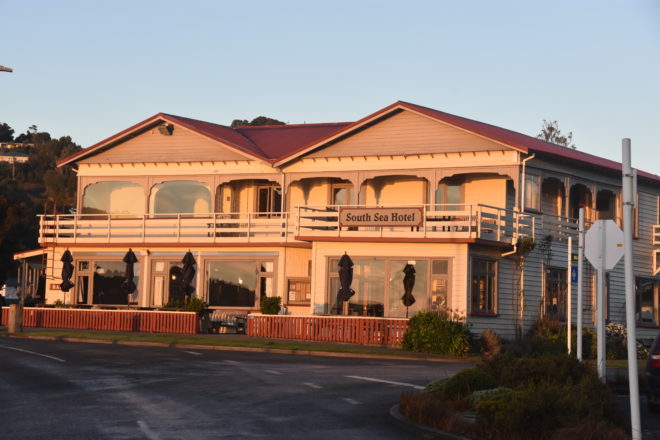 The South Sea Hotel is a Stewart Island icon

Stewart Island may be remote, but that’s what keeps its landscape unspoilt, its waters full of fish and any visit an adventure to remember.

WHEN TO VISIT: The southern-hemisphere summer, December to March, is the most popular time to visit Stewart Island. There are fewer tourists during winter, when many popular activities such as kiwi spotting are suspended. The climate is cool temperate and has relatively high rainfall, with February the driest month and May the wettest. The average high in January, the peak of summer, is 17°C, down to 8-9°C overnight, while July is the coldest month, with an average daytime high of 9°C and overnight low of 1-2°C.