Is this Seiko Presage “Irish Coffee” Cocktail the brand’s most Exquisite? 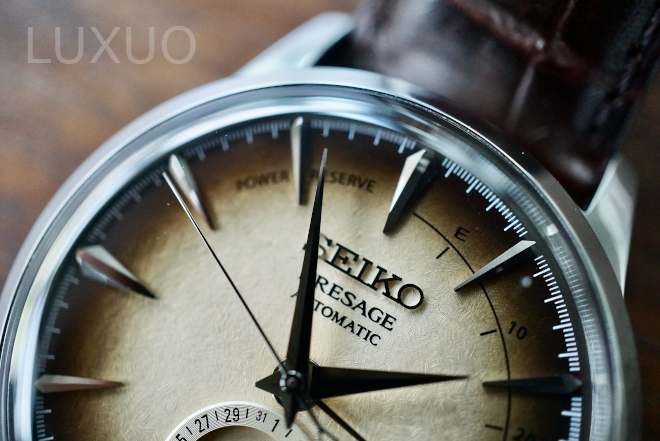 While many watch aficionados are aware of Seiko, few are aware of Japan’s rich horological heritage and cultural attitudes towards artistic pursuits which make exquisite watches like this Seiko Presage Cocktail “Irish Coffee” possible.

One can trace Japanese watchmaking as far back as the 500s, when the arrival of Buddhism and the decline of the Yamoto Court saw the advent of technology required to producing time keeping devices in Japan. In our contemporary times, this constant pursuit of perfection, so evident in the textured fumé dial of Seiko’s latest Presage “Irish Coffee” limited edition, is also reflective in Japan’s many adoptive traditions like Sebiro (Savile Row) suit-making, and whisky, it goes without saying that one of its most emblematic voices in watchmaking comes from just three generations of one family – The Hattori.

1877 is where Seiko’s story begins with Kintaro, the pre-eminent Japanese “King of Timepieces”, laying the foundations of modern clock and watchmaking in Japan. By 1881, his fledgling atelier K Hattori would soon become an important clock wholesaler providing him the revenues needed for a factory in Tokyo and the launch of Seikosha, a Japanese portmanteau for “exquisite house” – linguistically, Seiko is also a homonym for “minute” in the Japanese language and Seikosha pocket watches he produced during the earlier part of the Showa Era soon gave way to Seiko wristwatches. 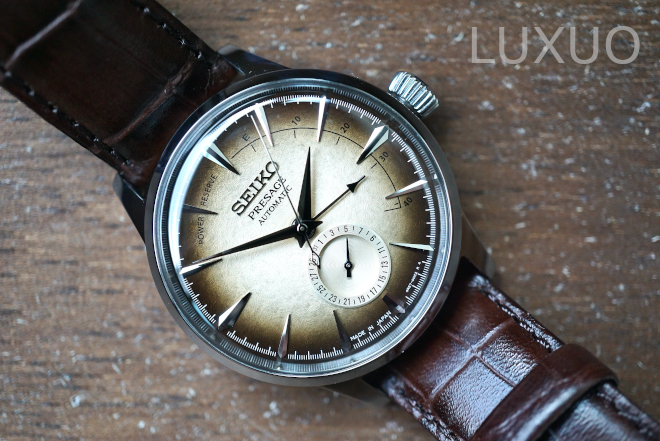 Demonstrating imagination, foresight and skill, his descendants like Chairman Shoji Hattori soon demonstrated (via independent, Swiss officiated trials) that their mechanical timepieces were a match for Switzerland’s finest, boosting the brand’s professional reputation but not really creating a dent in the market, until the advent of quartz technology – a race which Seiko ran against CEH (the Swiss research centre) made Japanese names including Seiko, an international household name of the 70s and 80s alongside Sony, but Seiko never stopped innovating and perfecting their mechanical time-keeping know-how even as family members like Kintaro’s grandson – Reijiro Hattori, who pushed for the brand’s expansion in semiconductor technology, quartz oscillators and liquid crystal displays.

Seiko’s immense skill at creating diffusion lines of watchmaking at all tiers – the highest, fronted by Credor and Grand Seiko and the mid-tier, well represented by the Seiko Presage line and value for money entry level lines exemplified by the Seiko 5 series can be pin pointed to the brand’s accolades in merits like the Diamonds International Awards, marking the pinnacle of jewellery design – its a testament to Seiko’s willingness to invest in not just technical know-how but artisanship.

Since the 1960s, Seiko’s Suwa and Kameido plants have each developed their own watches for Swiss Observatory trials and the spirit of friendly rivalry along with cultural attitudes towards honour-seeking have raised the level of craftsmanship beyond what most traditional mid-tier watchmakers are capable of. The Swiss can accuse Japanese watchmakers like Seiko for highly automated production that could sort and assemble all parts of a watch for testing, adjustment and casing without human intervention but how else would they have been able to leap frog their European counterparts in the mid-tiers since by the virtues of an economic theory known as ‘comparative advantage’, could the Japanese then be able to replicate such a sophisticated dial like the one offered on the Seiko Presage “Irish Coffee” cocktail time at such an attractive retail? 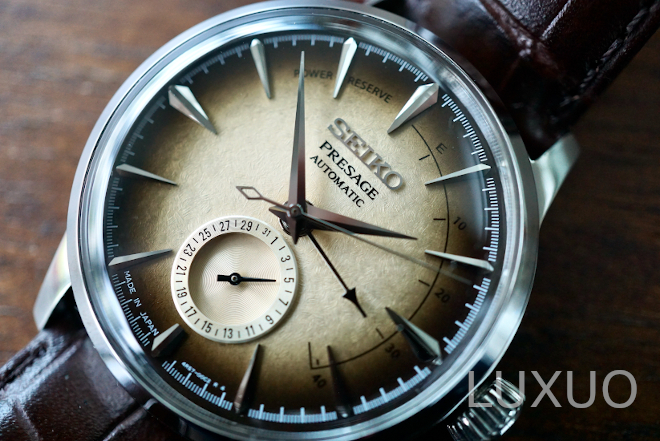 Tsutomu Mitome, the first President (and also the first not from the Hattori lineage) of the newly established Seiko Watch Corporation in 2001 can be credited for making available previously “Japan Domestic Models” or JDM collections like the Presage available to a wider audience. Given complete autonomy by Chairman Hattori, Mitome-san conceptualised Seiko’s many lines into clear, cohesive sub-brands.

For international and Southeast-Asian markets like Singapore, Hong Kong, Malaysia, Macau and Brunei, he discerned that the brand’s greatest asset lay in its high value and reputation for robust watches. Since “great-value-for-money” was double-edged hurdle in and of itself, Mitome sharpened diffusion lines like Seiko Presage into clearer, more distinctly luxurious offerings through better movements, sharper finishing and undeniable artistry. 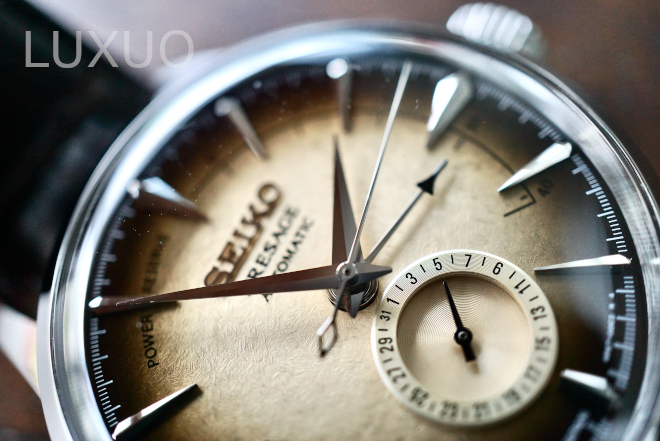 Utilising the availability of talent throughout the entirety of Seiko Watch Corporation, Mitomine leveraged on the numerous traditional watchmakers, diamond setters, goldsmiths and craftsmen towards executing production at all tiers of the watch market. This availability of talent at all levels was also made possible by the ingenuity of Directors like Tsuneya Nakamura who not just directed development of Grand Seiko but filtered the research and development down to Presage precursor lines like Marvel and King Seiko. With a strong domestic market and greater economies of scale, resources could be leveraged on everything from Seiko 5 and up, paving the way for models like the Presage Cocktail “Irish Coffee” which offered unbeatable value at every price level. In fact, manufacture and assembly of Grand Seiko’s high-grade 9S55 calibre also benefits the brand’s vaunted high accuracy techniques and where appropriate combined with Morioka Seiko’s own automated technology for some processes, where the difference between something like a Grand Seiko and a Seiko Presage lies is in the hand-finishing, manual assembly and regulation. In fact, if there’s one constant across Seiko, it’s the sheer universality of skills – designers like Yasunori Nishimura was a designer on every from Grand Seiko to Bellmatic and Twin Quartz models while director-designers like Hideaki Yasukawa would work on Marvel mechanical watches and subsequently oversee quartz timepieces and vice versa, this sort of cross-platform training which sees watchmakers literally joining the best of hand and machine crafted processes in one compelling cocktail.

Taro Tanaka, the first graduate hired for design work by the Hattori family, created Seiko’s “Grammar of Design”. The Seiko style began with Daini Seikosha products and later followed into Grand and King Seiko styles since the process of was labour intensive and not viable for entry-priced products but it was evident that public acclaim and growing appreciation for good design principles led to a giant leap in cooperation between all of Seiko’s watch factories and designers – resulting in sending staff overseas for training at Italian jewellery schools in 1968. By 1980, Seiko design centres opened in Düsseldorf, New York, Paris, Milan and Hong – in a sense – an early experiment in “crowd-sourced” aesthetics – taking the best from each region, each culture and distilling them into that one perfect cocktail of watchmaking. Seiko won their first   ‘Grand Prix de la Ville de Geneve’ in 1991, spurring a new era in what Tomohiro Asayama, Design Director of Seiko’s Credor division calls, “total design effort”, slowing changing the perception of Seiko’s hardware driven reputation. It then began to reap rewards in global collaborations with men like Italian designer Giugiaro and even Swiss watchmakers like Jorg Hysek, heralding new tech like metal injection molding; paving the way for new, non-traditionalist design collaborations with the unlikeliest of sources – a Japanese bartender named Shinobu Ishigaki. 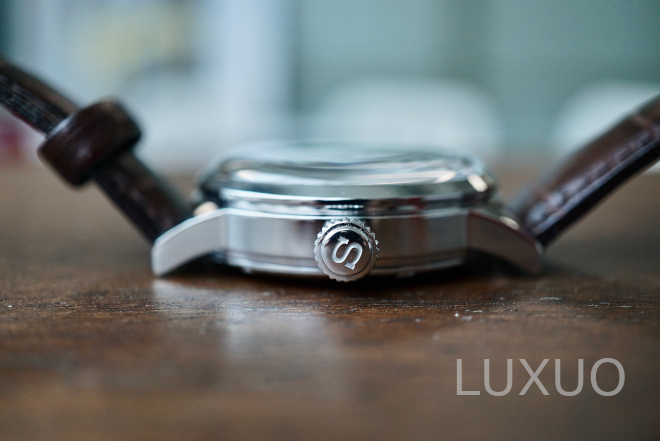 And so, one starts to see fine details like faceted hour indexes and sharp mirror finished dauphine hands and curved, hand-bent seconds hands into a mid-tier offering like Seiko Presage. But where the new Irish Coffee Limited Edition truly acquits itself in the ultra-competitive realm of entry level watchmaking is the dial.

Leaving aside the fumé effect for a moment, the gossamer textures which catches ambient lighting all too well might conjure recollections of another dial – the snowflake from Grand Seiko. The story goes that in 2004, while looking for something worthy of the Grand Seiko SBGA211, the craftsmen and women in the dial studio decided to try to make a dial with the same uneven surface as the mountains that dominated the view they saw every day at its birthplace – the uneven smattering of snow. Looking into the archives for inspiration, artisans unearthed the Suwa Seikosha’s Grand Seiko 56GS model from 1971. A fine grained surface with a texture of “powdered snow”, artisans used hand tools to replicate the base effect, creating an appearance reminiscent of Kochi Prefecture’s Tosa-washi paper. But what of that exquisite, shimmering hue? Paint was not the answer, a viscose application would fill in the irregularities and smooth out the surface. After a long process of experimentation, Seiko artists opted for silver plating because silver has the highest visible light reflection rate of all metals and what followed next was a painstaking process of hand finishing and successive layers of coating to create the subtle translucency.

While the Seiko Presage Irish Coffee does not go through such slavish techniques, the process is similar save for a few steps but still mostly industrial processes and then the application of the fumé. Never the less the dials, no two Irish Coffee dials are ever exactly alike. But perhaps, the most symbolic – the muse of Irish Coffee – a cocktail of coffee, Irish whiskey, and sugar, topped with cream. 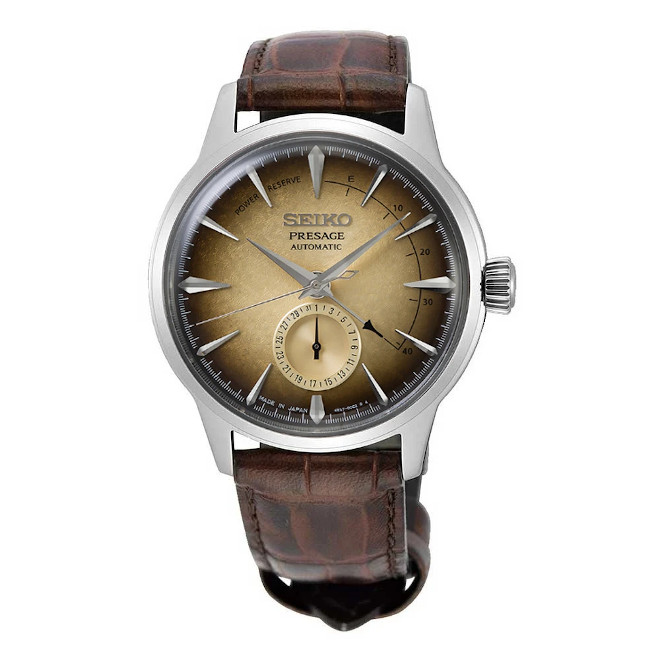 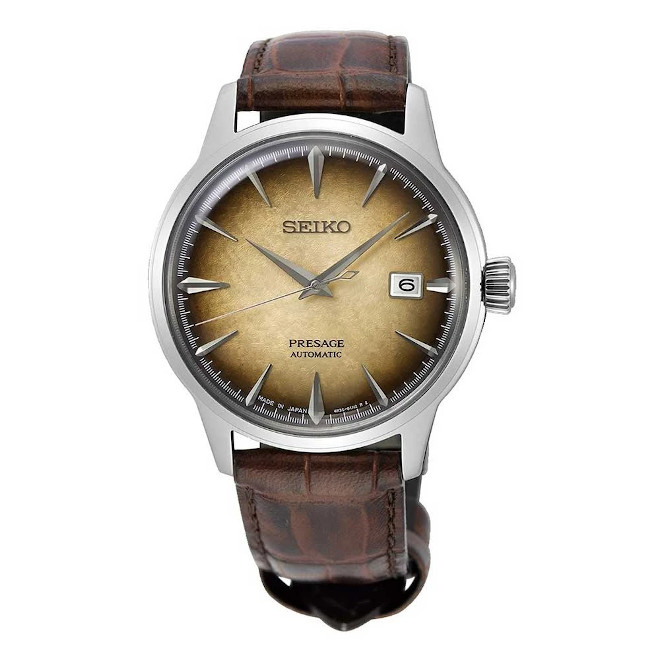 For fans of all things Japanese, whiskey (in addition to watchmaking) is something which craftsmen of the rising sun have a passion for. Whisky production in Japan began around 1870, mirroring Seikosha’s founding but the first commercial production was in 1924 with the arrival of the Yamazaki distillery.  While Japanese variants of aqua vitae tend to follow the style of the Scots rather than the Irish, this is more of a nitpick, the real allure (aside from the obvious beauty) is this Japanese word connecting mind, body, and spirit – kokoro. Conceptually, kokoro unites heart, mind, and spirit: if Seiko be representative of the Japanese heart (dedication to finishing and decoration) and mind (devotion to engineered perfection), the spirit is best exemplified by Shinjiro Torii, the founder of Suntory who decided against strong opposition of other senior members of the company to go into whisky distillation. In Scotland, each distillery has a distinctive character or house style but in Japan, large Japanese producers—namely Suntory and Nikka (founded by Torii’s first distillery executive Masataka Taketsuru no less) —have the luxury and not to mention wherewithal for producing dozens of styles of whiskies under a single roof – a spiritual analogy (pun intended) to Seiko’s own multi-pronged approach to watchmaking.

The colour of the dial and the embossing is also a direct reflection of the world of cocktails. The Presage Irish Coffee with its unmistakable quadrangle shaped hour markers and curved seconds hands, as well as the dauphine hand design, matches perfectly with the hour hand. The new Presage Cocktail watch series includes two feature models: the SSA401J1 and the SRPE11J1, both of which share the same design concept, with a 40.5 mm stainless steel case and box-shaped hardlex crystal to protect the delicate “Irish coffee” surface. The Presage Cocktail SRPE11J1 features a classic three-pin design and a date window at the 3 o’clock position. Time is clear and easy to read, and the watch’s built-in precision and reliable 4R35 self-winding movement is equipped with a swing frequency of 21,600 per hour and 41 hours of energy storage.