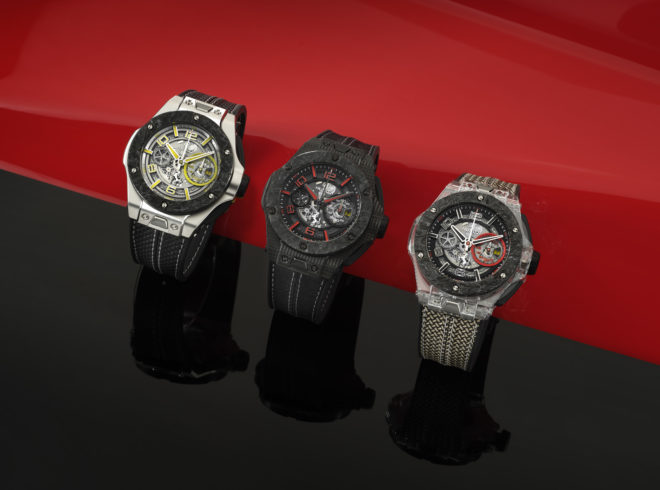 An accessible Ferrari LaFerrari is like a unicorn in that it does not exist. Likewise, the Hublot MP-05 LaFerrari is an amazing watch that also happens to be completely inaccessible. Obviously, accessible in this context has nothing to do with price, and everything to do with dreams. If the new Big Bang Scuderia Ferrari 90th Anniversary brings to mind the impossible LaFerrari and the MP-05, it is a testament to the power of dreams. Whatever the case may be, this series of three watches is perhaps already beyond reach, despite not being as outré as the MP-05 (that watch would have qualified for every ‘Crazy Watches’ list in every kind of publication, including the one in this very issue).

A quick Google search will reveal that the MP-05 appears alongside the new Scuderia watches, if you search for “Hublot Scuderia Ferrari Anniversary.” That’s great for adding new chapters to the dream and so on, but the new watches – it is really one watch with three variants – are easy to understand chronographs. In short, the movement here is the automatic Unico calibre HUB 1241 with flyback chronograph with column wheel, date and a power reserve rated at three days. You might recognise this as the same movement that powered the Big Bang Ferrari King Gold in 2014.

This brings us to aesthetics, and the story is much the same. There’s really nothing radical in the 45mm cases, well except perhaps in the version cased in sapphire crystal, but for purposes of this story, we’ll be looking at the 3D carbon-cased iteration. It is indeed a handsome case that channels the spirit of speed, but it isn’t new by any means. The Big Bang case has its critics, but it isn’t the polarising force that the MP-05 is. By extension, that means those who find unusual shapes appealing might be left a little cold here. 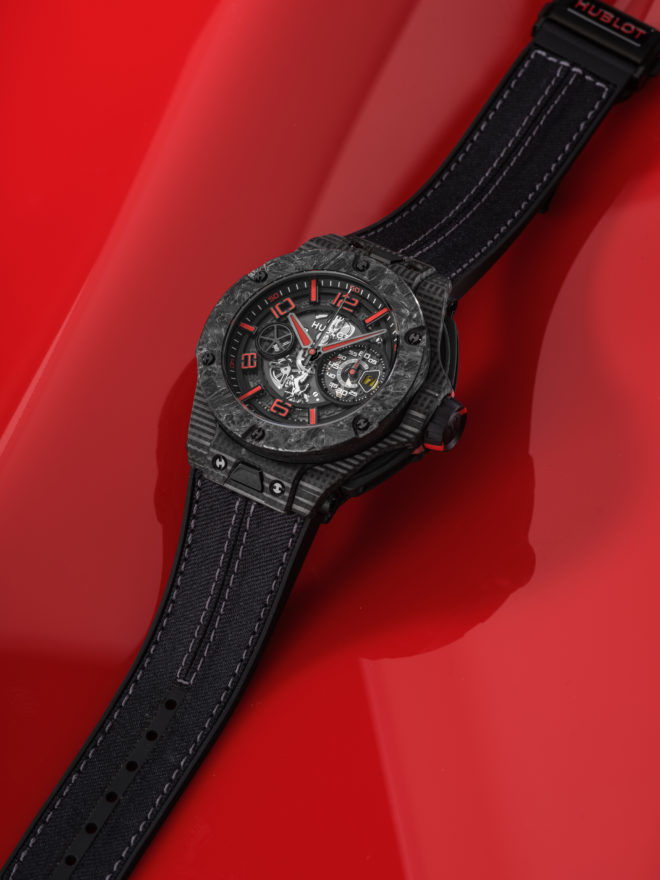 A specific reference in these Scuderia Ferrari watches are the bezels, which are made from the same carbon-ceramic compound that Formula 1 cars deploy. The different colour accent used here is a direct reference to Scuderia Ferrari, and so are the colours on the other limited editions; each of the three variants are limited to 90 pieces.

Theoretically then, this limited edition doesn’t seem to move the watchmaking needle much. We selected it for this issue because it makes an impression in person, and illustrates the importance of seeing and handling fine mechanical timepieces in person. There are some watches that inspire a sort of horological hunger, and this is one such piece. The version with the yellow accents is more visually appealing, but this 3D carbon case feels right.

CASE 45mm in 3D carbon (plus two other options); waterresistant to 30m