The city of Kingston in Upstate New York is steeped in history. It was founded in the mid-1600s by Dutch settlers, and eventually became the first capital of the state of New York in 1777.

Today, Kingston is known for its vibrant arts scene and historic buildings, many of which date back to the 17th and 18th century. 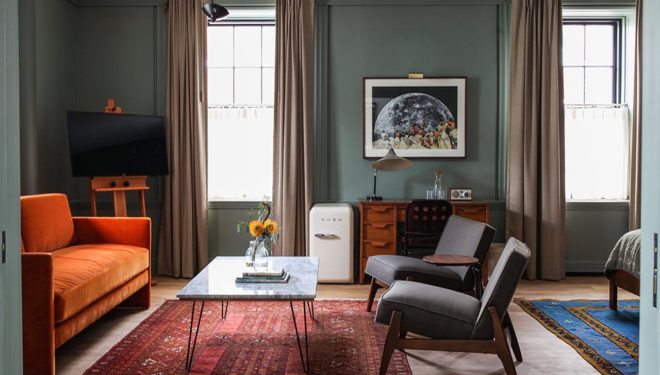 Four of these buildings now form the Hotel Kinsley, which became Kingston’s first boutique hotel when it opened last month.

Located at the intersection of Wall Street and John Street, each of these four structures possess a distinct feel and flair that tell unique stories of the architects who constructed them. Custom-made furniture, such as this hand-painted fabric headboard seen in this room, lend the hotel an old world charm

The focal point of Hotel Kinsley is 301 Wall Street, a building that evokes the character of the artists and explorers who have come through the town over the centuries. Built some time in the 1860’s, the property was originally the home of the New York State Bank; the signage still remains on the exterior of the now-hotel’s walls, as a reminder of its past. Outside 301 Wall Street, where the original “State of New York National Bank” sign is still visible

There are 10 guest rooms (rates start at US$275 per night) in this block, and each one has been meticulously and thoughtfully designed to reflect both the history of Kingston and nature of the nearby Hudson River and Bluestone Wild Forest, while still keeping true to present times. Utilising a combination of folk-sy colours and floor-to-ceiling finishings atypical of the region, such as tin ceilings and wooden floor tiles, interspersed with custom-made Scandinavian-style furniture, the designers have been able to blend American traditions and contemporary aesthetics into each room. 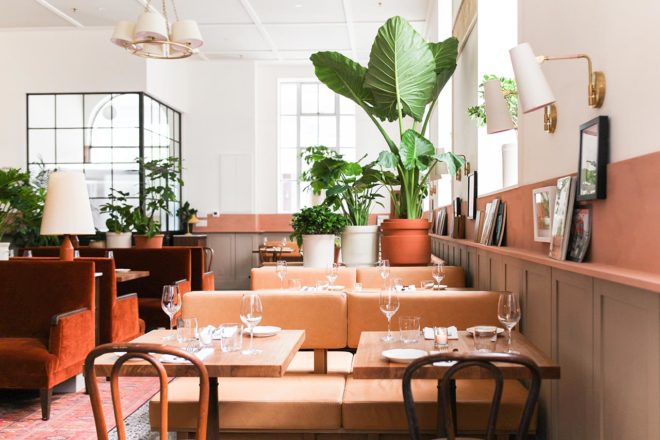 Besides serving as the main lobby and check-in, this part of the hotel also accommodates the Restaurant Kinsley, a charming and bright dining room that is as colonial as it is modern, and as airy and as it is intimate. The restaurant features many antique art pieces and furniture as decorations, giving the place a throwback feel that is true to its foundations. Here, guests can also expect an innovative curation of dishes that spans across continents, made with the freshest of ingredients sourced locally.

There will eventually be 43 guest rooms altogether in Hotel Kinsley, with the remaining buildings and rooms to be unveiled in the coming months. The oldest of the quartet is 41 Pearl Street, a building erected in the 1680s. It has a grand central staircase and over a dozen fireplaces.