Conceptual artists and photographers Bran Symondson and Terry O’Neil showcased their latest combined effort, Hollywood Re-loaded, at the HOFA Gallery this past month. The exhibition which ended on the 14th of October 2019, featured celebrity photographs by Terry O’Neil embellished with art by Bryan Symondson. Terry, who was awarded The Most Excellent Order of the British Empire (CBE) for his contributions to the United Kingdom’s art industry, is one of the world’s more collected photographers. His works hang in national art galleries all over the world. Terry O’Neil is honored for his six decades of work photographing the frontlines of fame. Ahead of his time, in documenting youth culture – Terry O’Neil’s work is regarded iconic and somewhat historic. 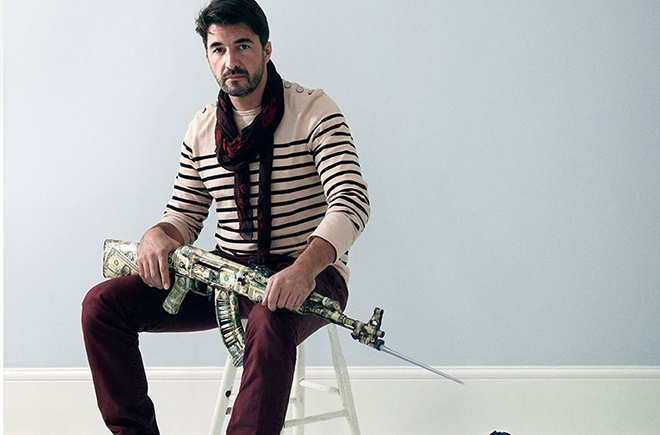 Similarly, Bran Symondson is renowned for being one of the 21st century’s finest reportage photographers. Starting out as an understudy to legends such as David La Chapelle, Nadav Kander and Gavin Bond, Bran Symondson developed his own creative flare. His work in portraitures has earned him the National Portrait Gallery’s 2003 Photographic Portrait Prize. Bran Symondson faces no shortage in recognition, as his emotive photographs from Afghanistan and Kenya continue to inspire and transform the societal understanding of war and famine. His feature titled ‘Lost Boys’ led him to win the prestigious Amnesty International Media Award in 2011. 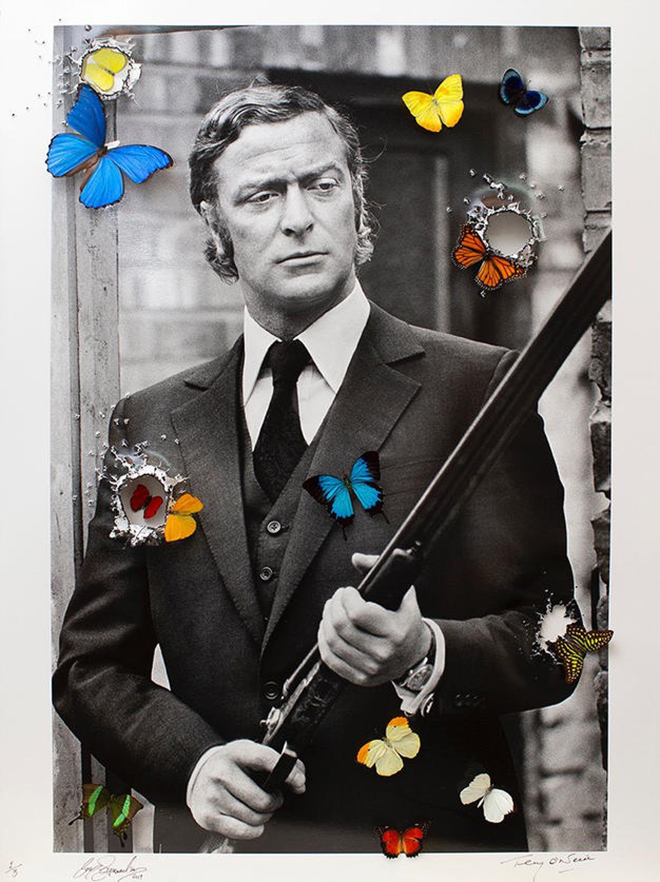 Based on their past works alone, one could hardly anticipate the masterpiece that is Hollywood Re-loaded. The duo breathe new life into Terry O’Neils original black and white photography from the 60s and 70s, featuring robust imagery of the era’s legends  – Michael Caine and Brigitte Bardot, armed with guns. Powerful images, made beautiful and intriguing with Symondson’s colorful imagination. Each piece is embellished with real bullet holes and the most exquisite butterflies. Wielding the same guns posed in each image, Bran Symondson revealed that he had shot at the photographs himself.

Thriller and crime genres in the 70s film industry often followed coarse characters, both humanizing and glorifying them. Starring as the protagonist in the classic British gangster movie ‘Get Carter’, Michael Caine was often depicted as cold-blooded and vengeful. His character, Jack Carter, possessed a pertinacious sense of justice through perverse violence. Amplified by the film’s stark and realistic direction, Get Carter had potentially created a dangerous perception of the British society – whereby violence and gangsterism are normalized. 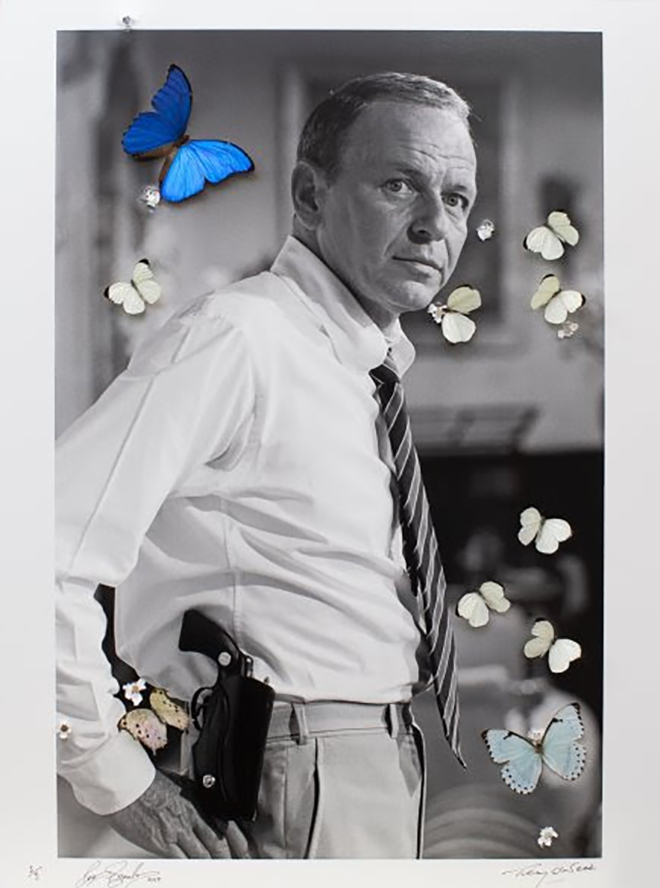 Featuring images of Frank Sinatra in his role as Tony Rome, an ex-cop-turned-private-eye. The film delves into issues of embezzlement, deception, blackmail, betrayal and gratuitous acts of violence – ultimately outlining him as a heroic protagonist. Once the former member and front-man of The Rat Pack, an exclusive informal group of entertainers active in the Las Vegas casino scene – Frank Sinatra had transitioned from a genteel crooner to a hardboiled detective. Its other high-profile members included, Jr. Dean Martin, Sammy Davis, Peter Lawford and Joey Bishop. The group often appeared together on television, in films and during on stage musical and comedy performances.

One could suggest that Hollywood Re-loaded is a flash back to a time where gun wielding was glamourized and idolized. Terry O’Neil and Bran Symondson’s specific choice of images in this exhibition therefore carry added significance. The exhibit itself appears to be an open dialogue about how society and the role of guns have changed over time – especially in the present moment where issues of violence and gun legislation in America are at its peak.