Charter in Norway: A Stunning Cruise Powered by Nature

When I was invited to spend a few days exploring Norway on board the 43m charter superyacht Daydream, my confirmation was almost instant. Located on similar latitudes to Iceland, much of it even further north, Norway has a reputation for spectacular scenery and adventure. 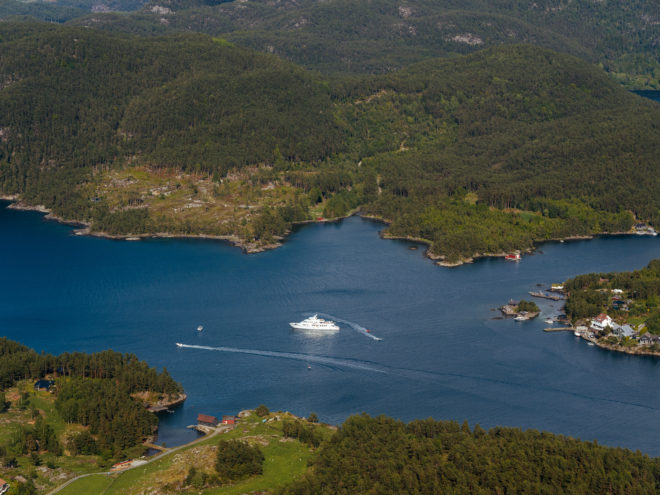 Norway is an emerging cruising and charter destination, so most superyachts will have the seas, rivers and spectacular scenery to themselves; Photo: Matt Porteous

During the flight, I read up and discover some impressive facts. The Human Development Index, published regularly by the United Nations, classifies Norway as the world’s most developed country. According to the Democracy Index of British magazine The Economist, the Scandinavian state is the most democratic and its GPD per capita ranks third globally.

Norway only has a population of 5.3 million, but is one of Europe’s largest countries in terms of area and has an enormous coastline due to its enormous number of islands. It’s frequently listed third among countries with the most islands, behind Scandinavian neighbours Sweden and Finland.

As such, it’s an ideal place to explore by yacht, even if charter activity in this area is still in its infancy. There are just a handful of megayachts here each summer, as well as newly built yachts from German and Dutch shipyards whose maiden voyages often take place in Norway.

As our plane descends over the breathtaking Norwegian landscape, rugged rock faces tower above gently rolling hills, fringed by crisp green meadows. The glassy swathes of deep blue fjord water are dotted with an occasional boat, while on the horizon, snow-topped mountains complete the picturesque backdrop. 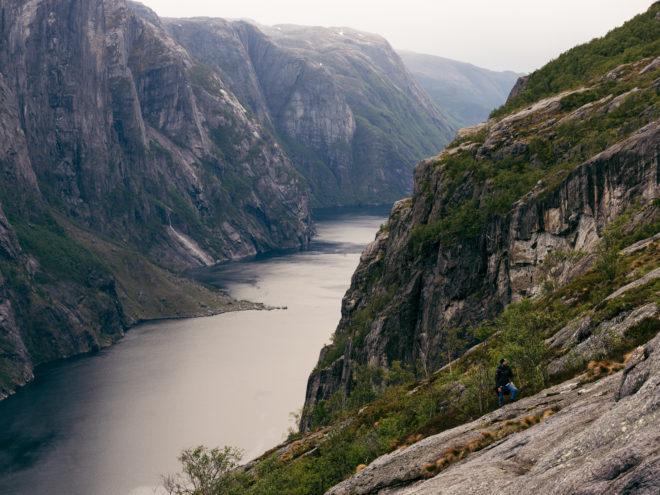 Such remarkable geography helps explain why this country has produced renowned explorers such as Roald Amundsen, the first person to reach both the South Pole and North Pole, and Thor Heyerdahl, famous for his Kon-Tiki voyage of 1947 in which he sailed more than 8,000km across the Pacific in a wooden raft.

As we finally land, it’s a surprisingly pleasant 18 degrees Celsius, warmer than anticipated, and the real adventure begins.

Arriving on board the Christensen-built Daydream, myself and my fellow guests receive a warm welcome from Captain Damion and his seven-strong professional crew. Handed warm, scented towels to refresh us after our travels, we then enjoy champagne and canapés before being shown to our staterooms.

I then join the other guests in the beautiful, open-plan saloon to receive a briefing from the Captain on the itinerary for the next few days. We are advised that not only will this include paragliding, diving and fishing but there will also be an exhilarating helicopter flight over the fjord-strewn landscape and visits to Preikestolen – one of the country’s highest vantage points – and the exquisite gardens on the private island of Flor and Fjære. 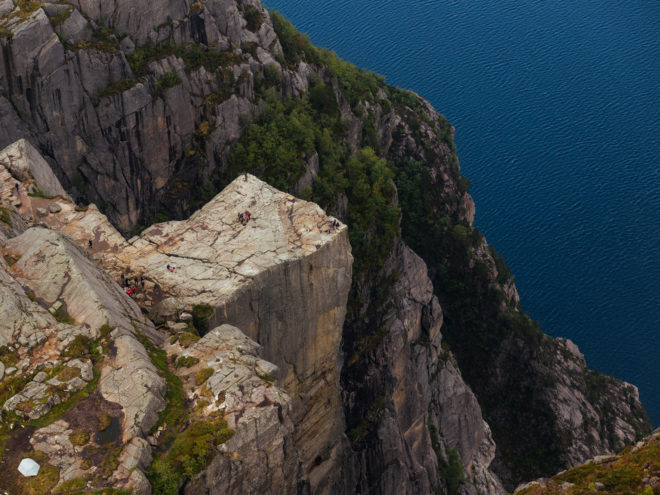 Preikestolen is a steep cliff that rises 604m and offers remarkable views from its flat top: Photo: Matt Porteous

Departing from Stavanger, one of the biggest cities in this sparsely populated country, we begin our thrilling exploration of the serene fjords in the Rogaland municipality.

Norway is a paradise for fishing enthusiasts. Daydream pulls up behind a well-equipped Jeanneau Merry Fisher tender, enabling guests to get a little closer to the coast or angle in shallow waters. Differing from many other European areas, Norway’s calm coastal waters are extremely rich in fish, so it’s almost impossible not to catch something.

We learn that experienced anglers often hook large halibut, impressive Atlantic salmon or the tasty but rather unattractive wolfish, as well as coalfish, haddock and cod. Parts of the fjords are sometimes over 1,000m deep and this is where unusual species such as the ice shark can be found.

The peaceful fjords provide the perfect conditions for watersports and we enjoy some exhilarating jetski rides before kayaking up close to waterfalls. 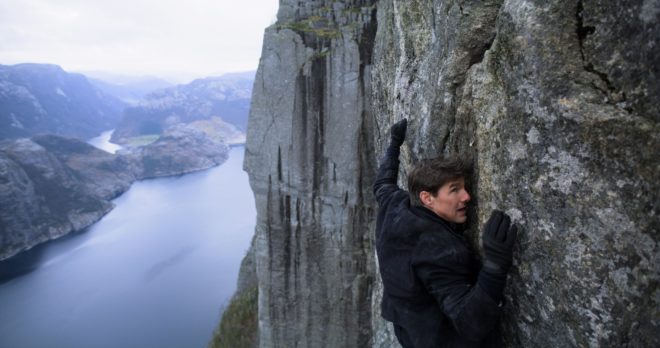 Following a quiet cruise along the exceptional Lysefjord, we find a helicopter waiting for us. Swooping over the landscape, our fascinating bird’s-eye view encompasses majestic peaks, tranquil bands of water, and flat, rocky platforms strewn with massive boulders.

The sight of Preikestolen is phenomenal. Also known as Pulpit Rock, it famously features in the recent Tom Cruise hit, Mission: Impossible – Fallout, as Ethan Hunt hangs by his fingers on the edge of the cliff, fighting for survival, while below him is a sheer 604m drop into the watery depths. If this is free climbing, I might just leave this to the experts and special agents.

Far below, Captain Damion provides the perfect photo opportunity by driving Daydream in loops. This is also the sign for our pilot that he should bring us back on board and although it’s getting late, one could almost think it is early afternoon. After all, Norway benefits from almost constant daylight in the summer months. 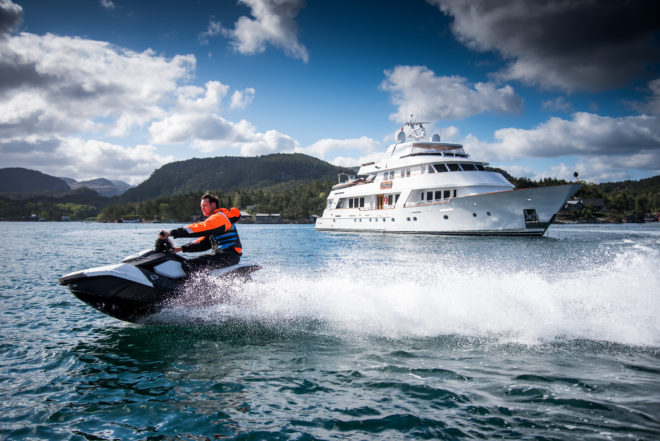 Norway is an action-lover’s paradise, with the calm waters perfect for everything from jetskiing to diving and kayaking; Photo: Tom Van Oossanen

Fortunately, we’re not too late for the sensational dinner awaiting us on the sun deck. Chef David is a master of creating fusion foods and wows us with a combination of king crab risotto, duck breast, smoked salmon and of course Norwegian wild fish.

A nightcap in the jacuzzi concludes this and every evening of our trip as it provides the perfect spot to catch up on the day’s adventures with fellow guests – from the exhilaration of jet-skiing, to the adrenalin-buzz of paragliding and the majestic views from the helicopter.

One of the many benefits of a yacht charter in Norway is the opportunity to enjoy a digital detox, as there are some areas of the fjords where the high cliffs mean your mobile phone signal is limited. However, communication with the outside world is always possible via the yacht’s satellite system, should it be required. 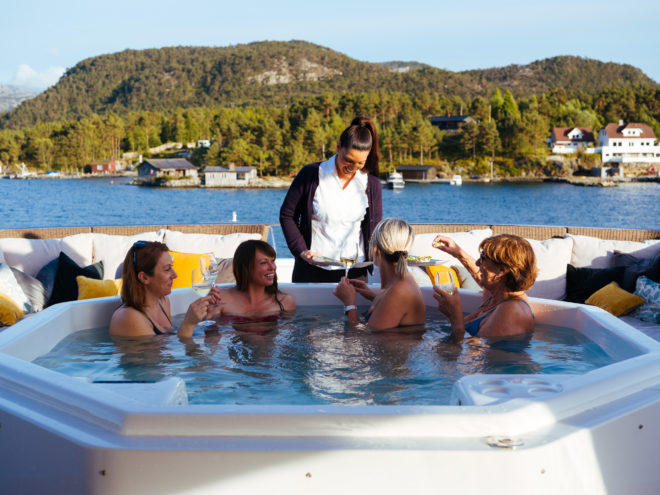 A glass of champagne in the jacuzzi is an ideal way to unwind at the end of the day, especially in Norway’s summer when it remains light most of the time

As we depart and I soak up the last views of this incredible landscape, I was actually heartened to realise that chartering in Norway is still in its infancy. For those looking for a new travel experience, offering more seclusion, outdoor adventure and rare opportunities in a remote landscape, Norway holds a powerful appeal.