When Prana by Atzaro played a starring role in an episode of Keeping Up with the Kardashians this year, Indonesia’s charter yacht business enjoyed a very public seal of approval from a very public trio of sisters. 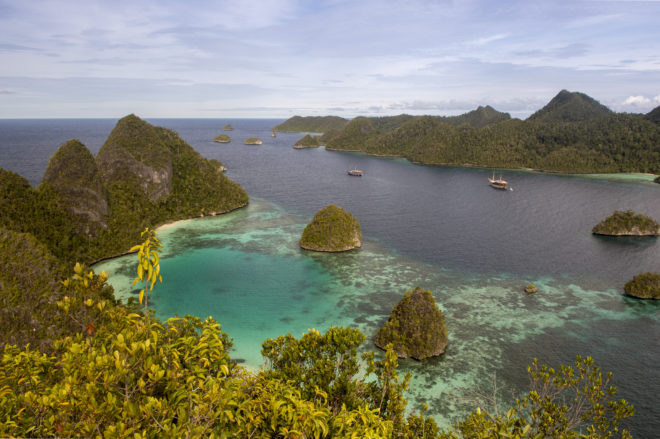 Following her launch last year, the 55m Prana joined the growing clan of beautiful charter phinisi superyachts, based on the designs of the famed trading vessels of the Spice Island trade routes.

Although not the longest charter phinisi, Prana is promoted as having the most useable space, 900sqm across four decks, as well as a remarkable nine cabins headed by the Batavia master suite, which has a sumptuous 20sqm private deck overlooking the stern.

Quickly established as a hugely popular charter vessel, Prana is the flagship central agency (CA) listing of Voyage by Yacht Sourcing, the charter division of Yacht Sourcing, which built the phinisi in 21 months in southern Sulawesi – birthplace of most modern phinisis – at its own shipyard in Bira. 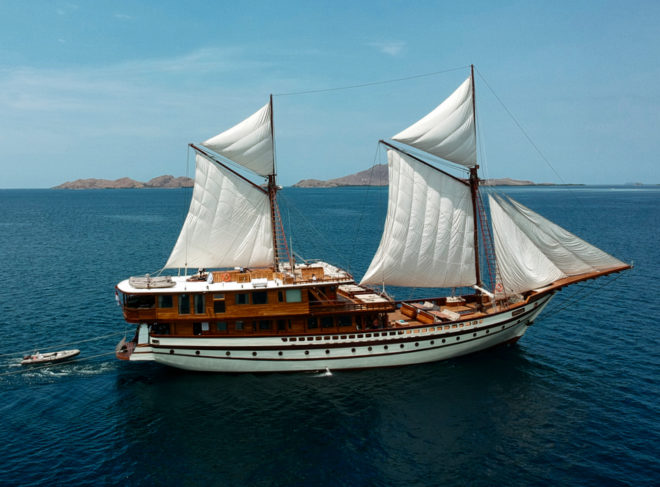 Made of ironwood and teak, Prana is a remarkable yacht, with accommodation for 18 guests and 18 crew, and some of the largest, most beautiful social areas of any charter yacht resident in Asia.

Offering panoramic views, the top deck is known as the yoga deck and can be converted into an outdoor cinema, while there’s a dedicated spa with two therapists who can also deliver treatments in-room or outdoors, even on the beach.

The crew includes a dive instructor and there’s a dedicated watersports centre fully equipped for diving, snorkelling, kayaking, paddleboarding, fishing, waterskiing and wakeboarding, plus a tender and towables. 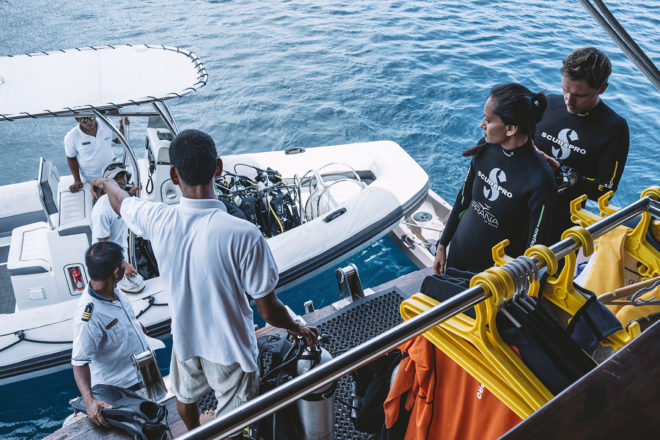 Prana has a comprehensive watersports centre with full dive facilities

Indonesia’s most popular charter destinations may not be as accessible as those around Phuket, for example, but two-thirds of this remarkable country of over 17,000 islands is water, and the diversity of its natural and cultural attractions are hard to match.

Like many phinisis and other yachts in Indonesia, Prana splits her season between the Komodo area from about May to October, then Raja Ampat and surrounds from December through April, with charter opportunities in the Spice Islands during the crossings.

Voyage won Best Asia-Based Charter Company (Phinisi) at this year’s Christofle Yacht Style Awards in Phuket due in large to the popularity of Prana, but the company’s impressive charter listing is now 16-strong and includes many other famous phinisis, plus motor yachts like the 50m Kudanil Explorer. 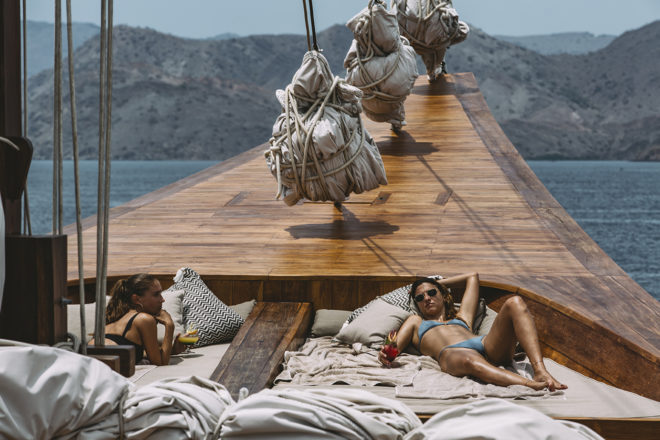 Prana has 900sqm of useable space across four decks

While Prana typically charters at between US$12,500-15,500 per day, Voyage offers several options more expensive than that, some significantly, such as the 65m Lamima. Price-wise, though, options start with the likes of the historic Anne Judith II and the 16m Kelana, which range from US$1,550-2,000 per day.

Launched as a British naval boat in 1943, the 24m Anne Judith II was later based in Papua New Guinea before spending most of the last 35 years in Indonesia, where she was among the first charter vessels.

She was a pioneer for many of the original surf expeditions in the country and remains a popular charter choice for surf holidays, and is also equipped for diving, kayaking and paddleboarding. Anne Judith II can accommodate six guests in two nicely finished cabins, each with a double and a single. 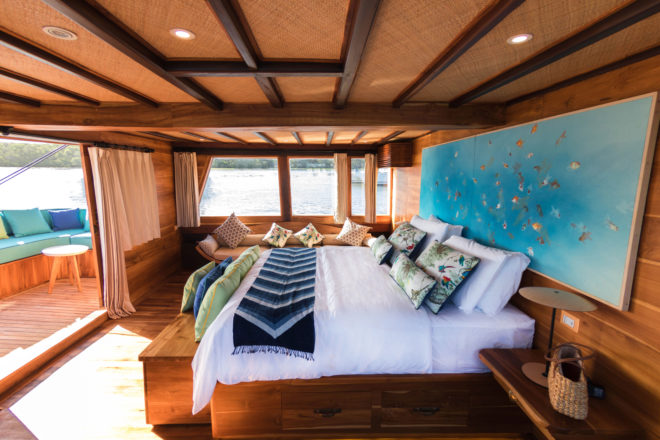 Voyage’s mid-range yachts include the 26m motor yacht Magia II, which has recently completed a refit and looks sensational inside and out.

Currently offered at a ‘launch price’ of US$4,900 per day, the teak-built, four-cabin yacht has a stunning aft master suite that offers panoramic views and its own private balcony with jacuzzi, while the VIP suite is also beautifully designed. The yacht is equipped for diving, snorkelling and fishing, and has other toys.

Launched in 2004, the 50m Silolona is the pioneer of the current crop of charter phinisi superyachts and was joined in 2012 by the 40m Si Datu Bua, both yachts managed by Silolona Sojourns. Like her big sister, Si Datu Bua was built by the Konjo boatbuilders of Ara in Sulawesi, to German Lloyd’s standards of safety and comfort. 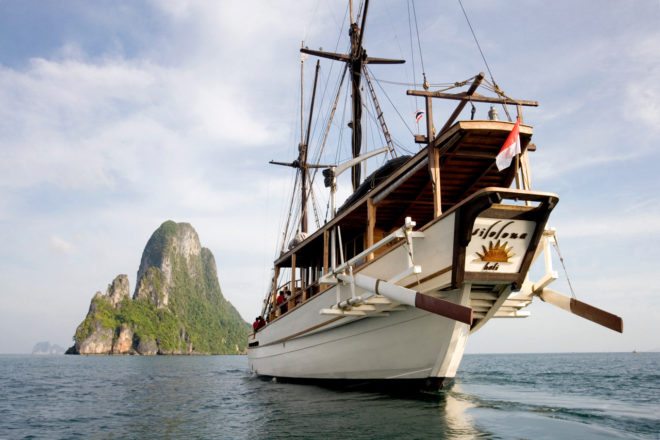 Owner Patti Seery has been immersed in local culture over the past three decades and her passion for the art, history and cultures of the Indonesian archipelago shine through in both of these incredible yachts. They also make for an enticing charter pairing, as Caroline Payen, Silolona Sojourns’ Yacht Charter Manager, explains.

“Silolona and Si Datu Bua have completed a lot of tandem charters and these are so successful. In tandem, we can accommodate groups or families of 16-20. The guests just love it,” Payen says.

“Recently we had an American wedding on board, which was so much fun and the parents who arranged it were so grateful. As always, the crew has endless imagination to create events on board for families and kids, keeping safety in mind, too.” 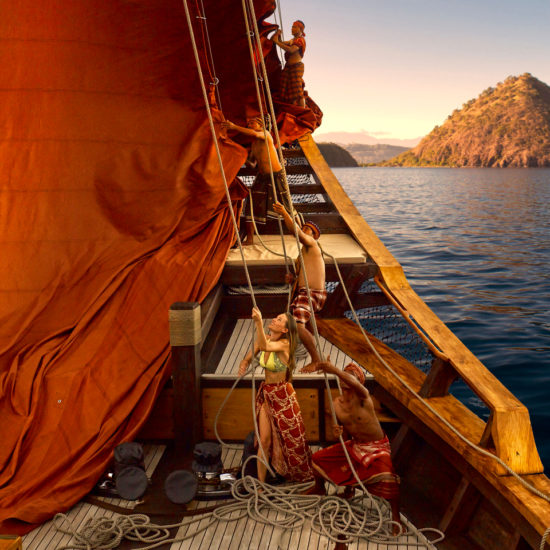 In both yachts, the exquisite attention to detail in the interior is reflected by Chinese trade ceramics, and walls adorned with original maps and charts of Southeast Asia dating from the 16th to the 18th centuries. The finish, service and amenities are five-star, such as the silky towels made from sustainable bamboo fibres.

From June through September, the pair are based in Labuan Bajo and operate charters in the Komodo archipelago, eastern Flores and the Savu Sea. From October to May, they head northeast to Ambon and charter to Raja Ampat, the Spice Islands and Cenderawasih Bay in Papua.

At 50m in length, Dunia Baru was a powerful addition to the family of charter phinisis when it was launched in December 2013 after eight years of painstaking construction by Konjo shipwrights.

The yacht is owned by Mark Robba, who also has a strong attachment to the region and has joined the yacht on adventures around and beyond Asia, including deep into the Pacific Ocean. The American has also ensured Dunia Baru has been meticulously maintained from launch. 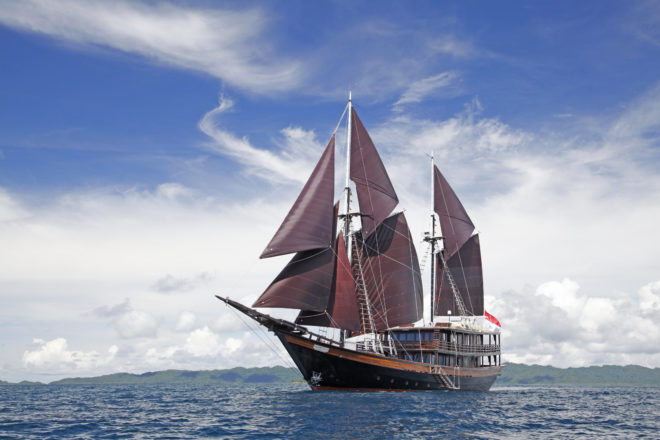 The 51m Dunia Baru is built for adventure and meticulously maintained

Accommodating 14 guests in seven staterooms and serviced by 18 crew, Dunia Baru was built for adventure and has an on-board dive instructor and full facilities for 14 divers. She also has a fantastic open kitchen on the aft deck where guests can watch the chef prepare meals.

The yacht is family-friendly, with high side railings and safe cushioned play area outdoors, while there’s expansive deck space for lounging, partying or exercise, and a roof deck ideal for morning yoga, offering panoramic views.

Dunia Baru is available for charter in the waters of Komodo National Park and surrounds from April until October, then Raja Ampat from November until March. Rates start from US$101,500 inclusive per week.

Operator Dunia Baru Adventures has also been keen to clarify that its charters in Komodo will not be affected by the potential 2020 closure of Komodo Island, a measure designed to allow the natural habitat to rejuvenate in order to sustain the island’s population of dragons and deer. Other charter yachts will also continue visiting the area. 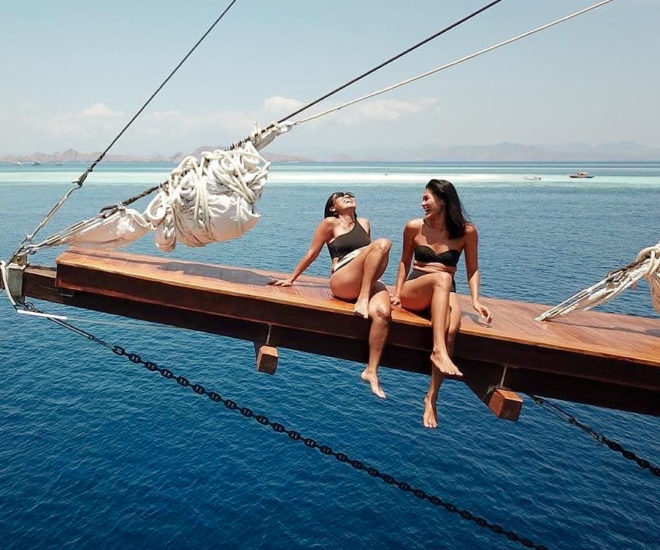 In fact, Komodo Island accounts for just 390sqkm of the 3,329sqkm land area of the Komodo Biosphere Reserve and National Park.

While Komodo dragons share their name with the island, they can also be found on Rinca, Padar, Gili Motong and on some parts of Flores, while Rinca offers plenty of hiking options for visitors, who can walk with guides along a range of trails from the ranger station.