“Kim, do it. Your butt will cover you.” That was Scott Disick’s advice to Kim Kardashian – she of over 140 million Instagram followers – as the reality TV star contemplated jumping off the side of the 55m phinisi charter yacht Prana by Atzaro and into the waters off southwest Lombok. 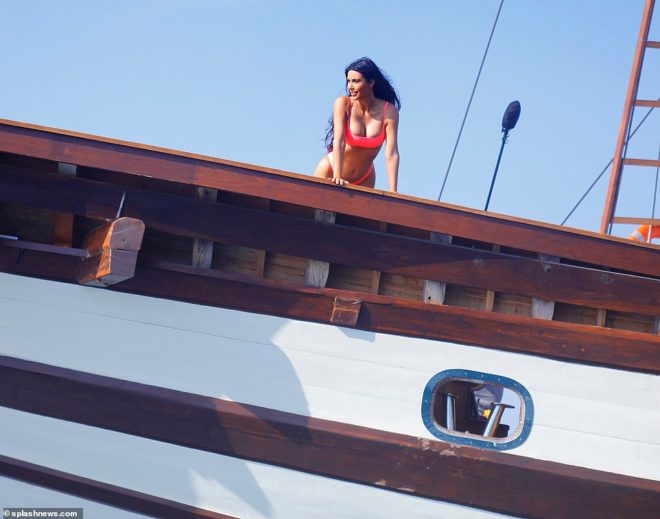 It was all part of an episode of Keeping Up with the Kardashians aired earlier this year, showing the Kardashian clan spending time on Indonesia’s most high-profile new charter yacht after they flew over from Bali – by helicopter, of course.

As Kim looked overboard nervously, elder sister Kourtney and her ex-husband Disick were the first to leap from the bowsprit of the enormous nine-cabin phinisi.

“It’s so high. I’m too scared,” said Kim, before a wave of encouragement from friends and family – including Disick’s wisecrack – inspired her to eventually take the plunge. 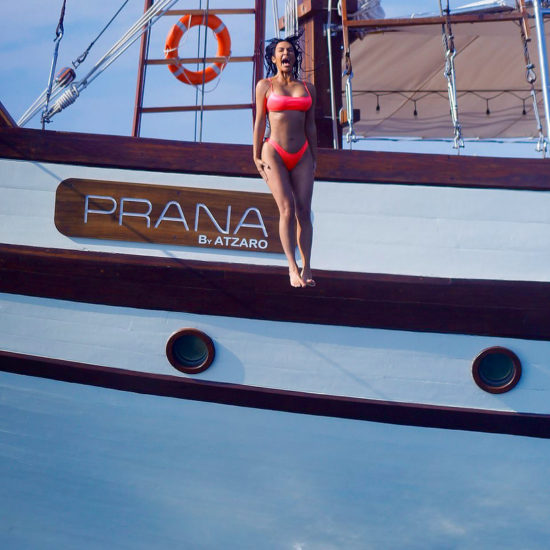 Kim Kardashian eventually jumps off the side of Prana by Atzaro, one of Asia’s top charter yachts

Asia is increasingly on the radar for celebrities and HNWIs, but the Kardashians’ flying visit also embodied how the profile and patterns of today’s yacht charterers are changing. Chartering a boat for one week is the norm in the Med and other parts of the world, but you don’t have to, and in Asia, many don’t.

Reanna Wang, Group Charter Manager of Simpson Yacht Charter, says: “Now, there are more non-sailors chartering a crewed yacht as a new form of holiday. People who would usually rent a villa are now considering renting a yacht. This is more so in Asia where growth is slow, but there’s potential.

“In general, there’s a higher tendency for Asian clients to charter a boat short-term, such as a long weekend in Southeast Asia. It all relates to the customers’ holidays and how easy flight connections are.”

VARIETY IS THE SPICE OF ASIA

In fact, day charter is the norm in the financial capitals of Hong Kong and Singapore, while much more time is spent on board while exploring Southeast Asia’s tropical paradises. 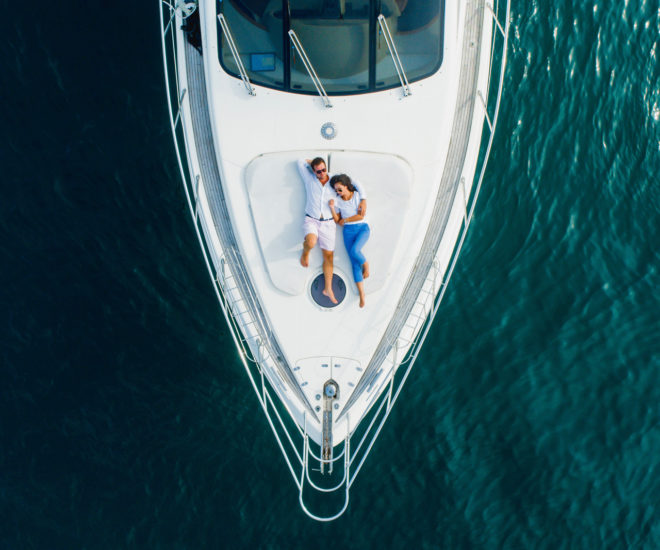 “In Asia, the most requested destinations for overnight charters are still the Andaman Sea – from Langkawi up to the west coast of Thailand, to the Mergui – and Indonesia. For us, at least 70 per cent of clients are asking for sailing catamarans.”

Charter options can range from bareboat sailing yachts to crewed sailing yachts, motor yachts and superyachts. Even in the superyacht sector, the habits of charterers are changing, according to Carmen Lau, Managing Director of Camper & Nicholsons Asia.

“Traditionally, the charter business is more family oriented, but it’s now becoming more diversified,” says Lau, who has been working in the superyacht industry since 2004.

“More charters are becoming increasingly sport-orientated and we also have younger charterers. It has also changed in the sense that we get many more last-minute enquiries. In fact, we’ve just launched our brand-new digital platform to ensure today’s clientele can quickly find all the information they need at their fingertips.”

Still, Lau believes that even if the charter market in Asia is still developing and maturing, most C&N clients are knowledgeable charterers.

“Potential charter clients based in Asia are well informed and knowledgeable about the charter market,” she says. 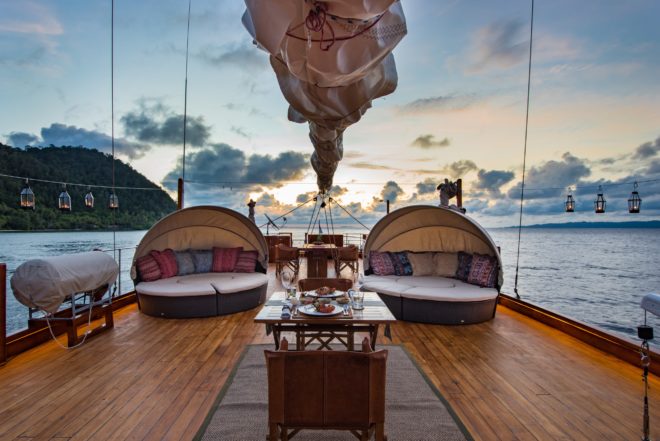 “However, it’s important for us to clarify what’s included in the price, such as whether it’s all-inclusive or whether there’s also APA (Advance Provisioning Allowance). Also, we ask clients about meal preference and habits, so we can inform the crew to properly cater to their needs.”

ON THE CHARTER MAP

The Mediterranean and the Caribbean remain the world’s leading charter markets and balance nicely with their opposing peak seasons, but Camper & Nicholsons – which has one of the world’s largest fleets of superyachts for charter – believes Asia can only grow in popularity.

For 12 years, Aqua Expeditions has operated boutique luxury cruise boats on the Amazon River in Peru and on the Mekong River in Vietnam and Cambodia. However, the Singapore- headquartered company will enter the coastal cruises market in November when it operates the 15-suite Aqua Blu, a refurbished British Naval Explorer, in eastern Indonesia.

“Asia is becoming the ‘next generation’ for charter and more operators like Aqua Expeditions are exploring new opportunities here and investing, because they can see an increase in enquiries for chartering in Asia,” Lau says. A refurbished British naval explorer, the 60m Aqua Blu features 15 suites for charter and will start operating in Indonesia later this year

Still, while charterers have an amazing range of yachts and destinations to choose from in Asia, charter companies face frustrations in navigating the varying regulations in different markets, many of which prohibit or dissuade visiting superyachts from chartering on their global sojourns.

Says Wang: “From our side, it’s still very difficult to grow the charter market like it is in Europe due to the different marine regulations across Asia. Currently Thailand has the most charter-friendly government regulations and also mature boating facilities, from marinas to nautical suppliers.

“Many other beautiful destinations have either evolved a charter business with locally-built yachts, like phinisis in Indonesia, but in the likes of Vietnam or the Philippines, pleasure vessel charter regulations are still to be properly developed.”

Superyacht charter companies may not feel the same way about Thailand and Lau says her team works with visiting superyachts in advance of their arrivals to clarify the ‘limitations’ in various countries.

“Governments should be aware that yachting is a developed business, so they should support the industry with clearer procedures on pleasure vessels and charter business in terms of regulations, taxation and local destinations they can visit,” Lau says. 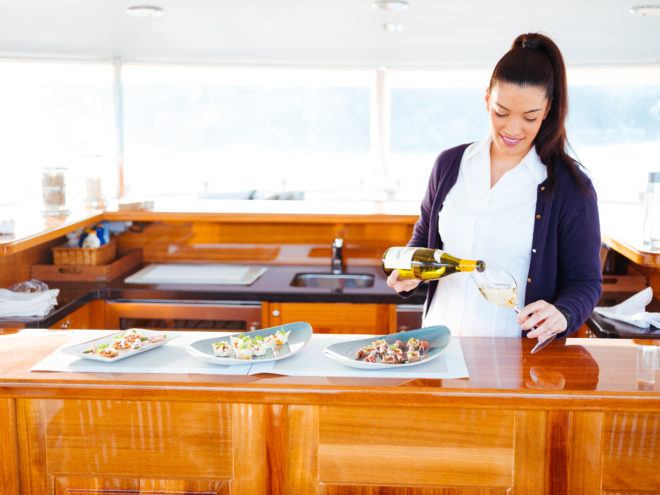 Chartering a luxury yacht remains one of life’s grand experiences, with crew and food of huge importance

“They need to realise the superyacht and charter industry offers a lot of potential for their countries through the spin-off to other services and trades. This is something that should be addressed regionally. There are lots of opportunities and the potential to change.”

Despite the restrictive – or lack of – regulations, the number of 30m-plus superyachts visiting Southeast Asia (not all available for charter) has steadily been increasingly over the past few years, according to a report by SuperyachtNews using data from MarineTraffic.

Indonesia is Southeast Asia’s other key superyacht destination and 38 visited last year, with the world’s fourth-most populous nation having welcomed between 28-31 in each of the previous three years.

By size, the number of 30-40m and 40-60m yachts visiting Thailand and Indonesia is almost identical. Thailand, however, welcomed 11 yachts from 60-90m to Indonesia’s three last year, while the latter attracted a remarkable six megayachts above 90m, with just one visiting the ‘Land of Smiles’. 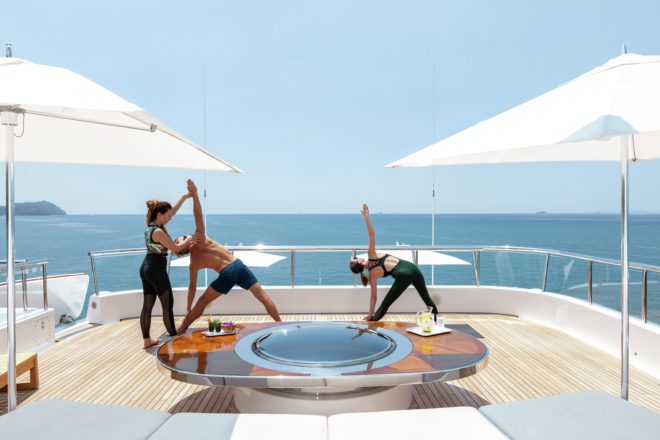 Superyachts (Lady E pictured) have the space and facilities to offer a wide range of activities; crew can often be qualified to teach yoga, water sports and much more; Photo: C/O Burgess

Visiting superyachts stay longer in Thailand and are not as seasonal, with 10 or 11 present for eight months in 2018, six-nine from March to May and eight in October.

In contrast, superyachts to Indonesia were far more concentrated in the northern winter, with a high of 11 in January, dropping to three in May and June, and up to nine and eight in November and December respectively.

While legal regulations currently prevent the superyacht charter business from achieving its potential in Asia, the SuperyachtNews report doesn’t believe the relatively small number of marinas to be as big an issue, due to the thousands of islands and anchorages on offer, concluding: “The charms of Thailand and its neighbouring nations are the cruising opportunities, not its marina culture.”

For Lau, though, attracting more superyachts to Asia and publicising exciting new charter options would give a boost to not only local economies but also the region’s entire yachting industry.

“We need to encourage more long-range superyachts to Asia and provide more charter information about Asia-Pacific as a whole,” Lau says. “With more larger yachts chartering in Asia, there would also be an opportunity to improve the infrastructure in the region.”