Azimut’s biggest world premiere in 2019 is a yacht that manages  to span two of its Collections and is exhibiting at both the Cannes Yachting Festival (September 10-15) and Monaco Yacht Show (September 25-28). The Grande S10 is both the flagship of the Italian brand’s S Collection and at 28.7m (94ft 2in) is also included in the Grande Collection of the builder’s largest models. 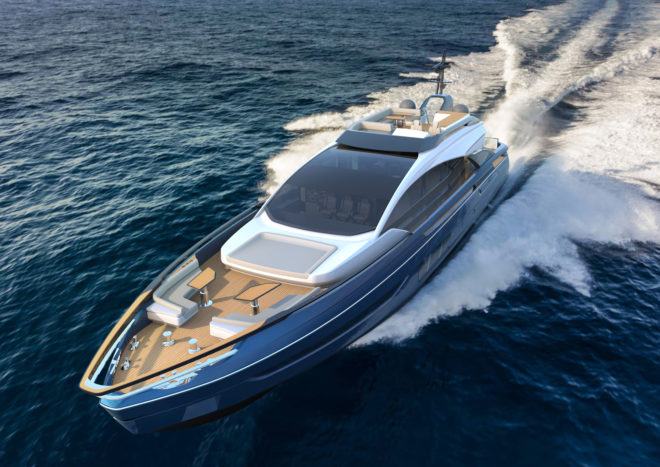 Alberto Mancini, in his first project with Azimut, devised the concept and worked on the exteriors of the S10, citing inspiration from megasailers, seaside villas and sports cars. It’s a notable shift, as Stefano Righini, who has worked with Azimut since the late 1980s, styled the new-generation S7 and S6, released at Cannes in 2017 and 2018 respectively.

Francesco Guida handled the interior of both of those new-generation sports yachts and continues his work on the S10, which features four guest cabins in the forward half of the lower deck, in front of the crew quarters, which houses the galley and two crew cabins.

The S10 features a large swim platform, while the main deck starts with an open area for sun loungers. Central stairs lead up to the flybridge, while the side decks offer access to the covered cockpit and saloon. Built in GRP and again featuring Azimut’s extensive use of carbon-fibre, the yacht is fitted with twin 2,600hp MTUs and is expected to reach 35 knots.

Azimut’s other newcomers at Vieux Port are the S8, a late announcement, Azimut 78, the new Flybridge flagship, and the Atlantis 45. Although the latter was displayed in May at the Versilia Yachting Rendezvous, the builder considers the Cannes display the model’s world premiere.

Mancini designed the exterior of the 78, while Achille Salvagni handled the interior of what is the largest yacht ever built at the Avigliana Shipyard. 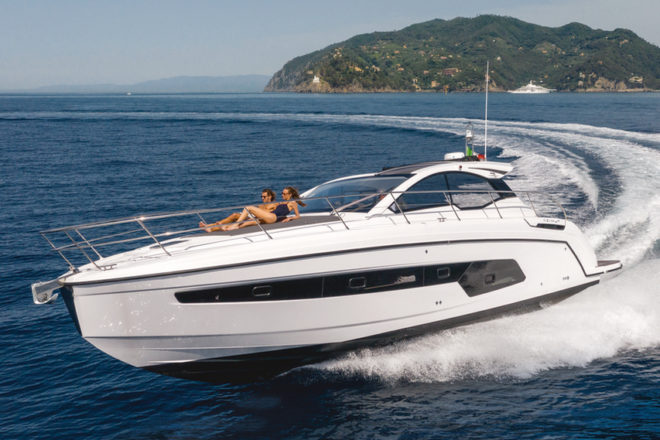 The Atlantis 45 developed with Neo Design succeeds the popular 43

It’s also the first yacht in the Flybridge Collection to be fitted with three Volvo IPS propulsion units, to reduce consumption and noise, improve manoeuvrability, and even increase available living space. In fact, the layout has been designed in the manner of a superyacht, with emphasis placed on separating the guest and crew areas.

The Atlantis 45 features an interior and exterior design developed with Neo Design and is the successor to the 43, which sold over 140 units. A pure open, the 45 features an aggressive design and sporty personality, and is powered by two 435hp Volvo 600s with IPS transmissions, for a top speed of 33 knots. The boat features full-beam owner and guest staterooms, and a galley and dinette that face each other. 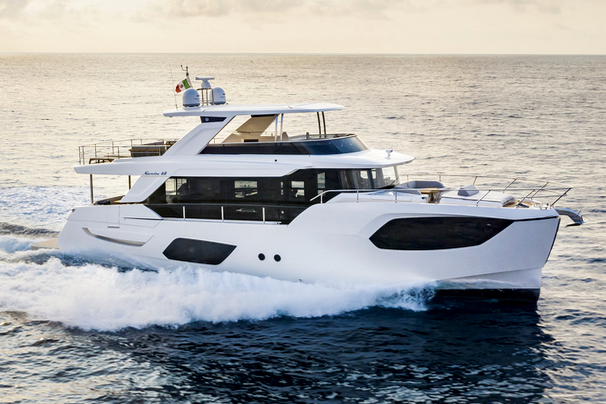 Absolute is staging world premieres of its Navetta 68 and 47 Fly, having started the year with the unveiling of the 62 Fly at Boot Dusseldorf. The Navetta 68 has a conventional cockpit leading inside to an aft galley and dining table, and a large saloon with steps up to the raised helmstation.

The lower deck has four guest cabins. The master and VIP both feature full-beam layouts with forward-facing double beds, while in-between are two guest twins, one with electrically operated beds that can join to form a double. There are also two crew cabins aft. 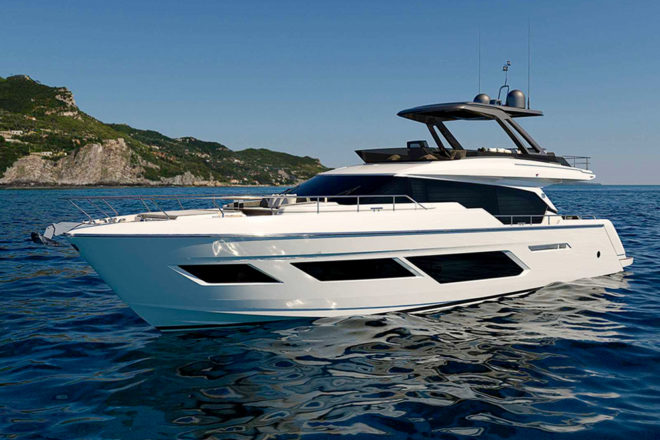 Ferretti Yachts is staging the world premiere of its 720 at Cannes, a year after unveiling the 670 at the same show. The 720 is the second project to sport an exterior designed by architect Filippo Salvetti in collaboration with Ferretti Group, while the interior has been handled in-house. 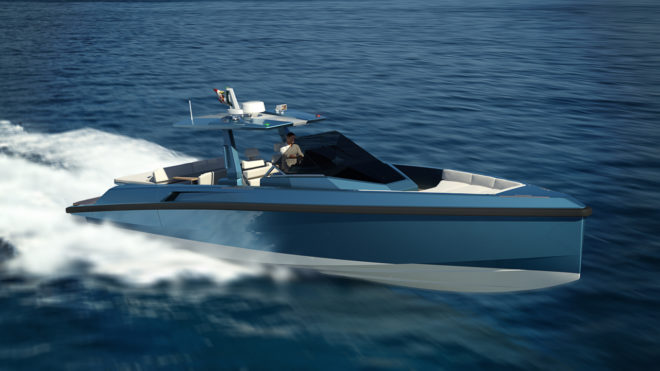 ; the 48 Wallytender is the first new model from Wally since the iconic brand was acquired by Ferretti Group

The 48 Wallytender is the Ferretti Group’s other world premiere at Cannes and the brand’s first new model since it was acquired. The 48 retains the avant-garde design, wraparound fender and exciting performance that distinguish the Wallytender, but adds new features including a cabin.

The fold-down bulwark sections increase the swim platform area, which is served by a retractable passerelle that doubles as swim ladder. There are lounging areas fore and aft, plus two rows of seating, a dining table and galley unit. The yacht features joystick control and twin Volvo IPS650 engines, totalling 960hp, for a top speed of 38 knots.

Among the large group of Ferretti Group brands, Custom Line’s 106’ is also a new model although it had its official world premiere at the first Venice Boat Show in June, while Riva’s display will include the 90’ Argo, which had a private debut in Miami in early March. 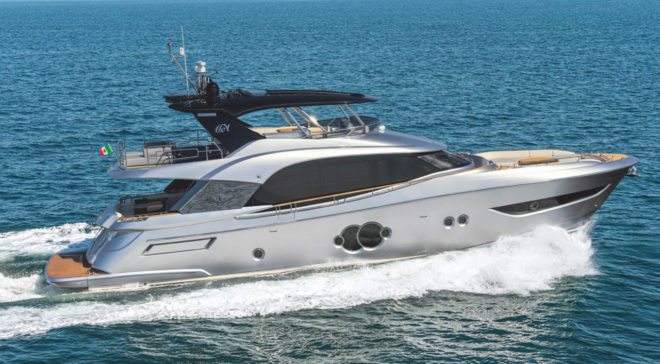 Monte Carlo Yachts is staging the world premiere of its MCY 76 at Cannes as it continues its remarkable resurgence. The model is the Italian yard’s third new launch of 2019 after the MCY 70 at Boot Dusseldorf in January and the MCY 66 at Venice, all designed by Nuvolari-Lenard.

The MCY 76 shares the same name as MCY’s first-ever first model, launched in 2010, but like this year’s other second-generation models, offers larger living areas, more light and many other improvements on its precursor. The galley is attractively integrated into the saloon, the lower deck offers four cabins, while the flybridge is among the biggest in class. 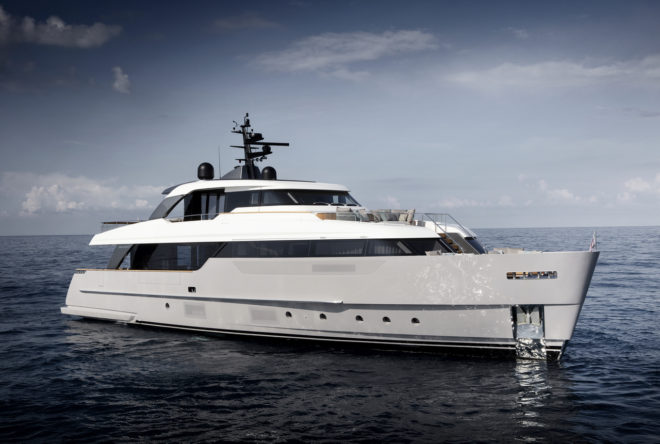 Sanlorenzo is staging the world premiere at Cannes of its SD96, the new entry model to the builder’s semi-displacement range and the successor of the SD92, which was launched in 2007 and sold 27 units.

The 28m SD96 features exterior lines by Italy’s Zuccon International Project, led by Martina and Bernardo Zuccon, and an interior by Spanish architect Patricia Urquiola, who focused on ‘transformability’ in her first yacht project. Examples include an upper-deck skylounge that, due to modular furniture, can be used as a living room, dining area or cinema, while on the lower deck, the living room can be transformed into a VIP cabin with bathroom through a system of sliding panels.

Arcadia’s four-cabin Sherpa XL, designed by Milan-based Hot Lab, is another large yacht making its world premiere at Cannes. Benefiting from solar technology, the 24m model has a wide beam of 7m that helps create 220sqm of living space, with roomy social areas including the aft cockpit, forward skylounge and the upper sunlounge.