Even a rain-soaked opening day couldn’t dampen enthusiasm for this year’s new-look Cannes Yachting Festival, with organisers announcing a record 54,000 visitors from five continents over the six days, a solid jump from 51,000 in 2018 and 50,000 in the previous couple of years. 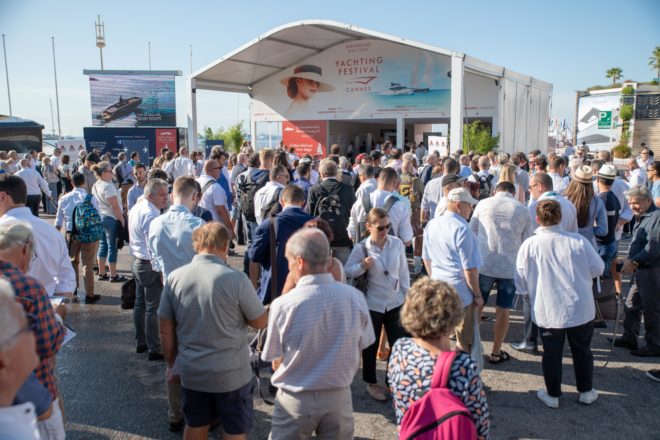 The 42nd Cannes Yachting Festival attracted a record 54,000 visitors, despite the first day being a virtual wash-out due to rain

There was also a 12 per cent increase on the number of exhibitors to 611, of which almost half (46 per cent) were boat builders or importers. The 42nd edition of arguably the world’s most important boat show featured 650 yachts including 213 new models, of which 127 were making their world debut.

And although the Monaco Yacht Show is rightly regarded as the superyacht show, Cannes had its fair share of large boats, with a total of 168 models upwards of 20m (66ft), of which 109 were over 24m (79ft), a length often used as the starting point for ‘superyachts’.

However, this year’s Cannes Yachting Festival will primarily be remembered as the first to feature the much-publicised separation of motor and sail boats, with the former remaining in the Vieux Port and the latter joining the brokerage and toys display in Port Canto, an eight-minute boat shuttle eastwards across the Bay of Cannes.

Brokerage boats have exhibited in Port Canto for 15 years and this year comprised 47 second-hand yachts ranging from 22-65m (72- 213ft), while the toys display only moved across in 2018. 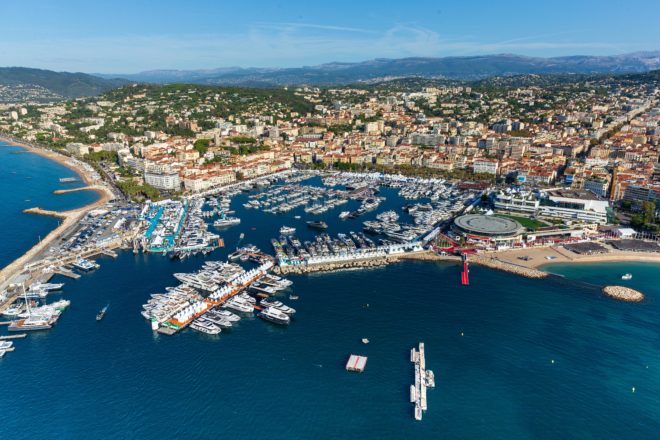 Aside from a few resident sailing boats, the Vieux Port was all motor yachts at the 42nd Cannes Yachting Festival

The motor/sail split was driven by the need to increase exhibition space, but presented logistical challenges for companies who produce both types of boats, such as Beneteau and Jeanneau, as well as some catamaran builders like Lagoon, Sunreef, Fountaine Pajot and Bali. Overall, there were 44 sailing and 13 power catamarans.

The dedicated sailing area this year resulted in 15,000 visitors entering Port Canto via the land entrances, while the numerous sea shuttles carried almost 16,000 people across from the Vieux Port.

The new layout created an extra 16 in-water berths to increase the number of monohull and multihull sailing boats to 119, of which 41 were new launches. On land, sailing exhibitors and the builders and equipment manufacturers in this sector shared a 4,000sqm quayside area, twice the surface area available in 2018.

Organisers of the Cannes Yachting Festival stated that the overall display of boats and attendance figures at both sites justified three years of discussion with the shipyards. 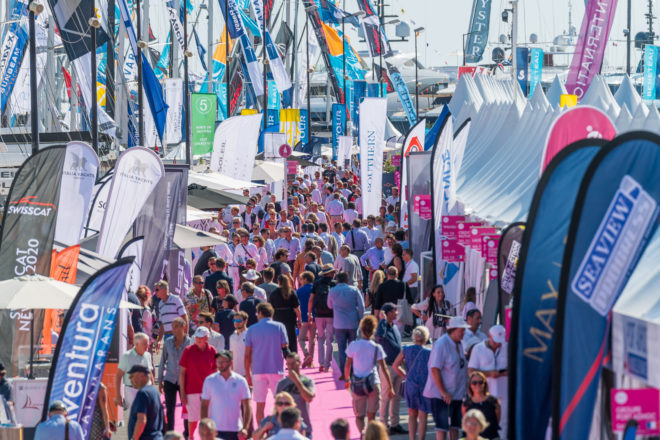 Featuring monohull and multihull sailing yachts for the first time, Port Canto attracted 15,000 visitors through the land entrances and 16,000 via boat shuttles

Sylvie Ernoult, Director of the Cannes Yachting Festival, said: “Our aim to create the biggest in-water exhibition in the world for new sailing boats has been achieved and the promise has been kept. Numerous visitors strolled along the quays of the Sailing Area, resulting in some 30,000 visits.

“The shipyards’ demands for more in-water space to be able to exhibit more boats in even better conditions were met with over 400m of quayside dedicated to monohulls and over 400m dedicated to multihulls.”

In Vieux Port, the traditional heart of the show, some 480 motor boats were on show on land and in-water, ranging in length from 2m to Baglietto’s 48M T-Line. 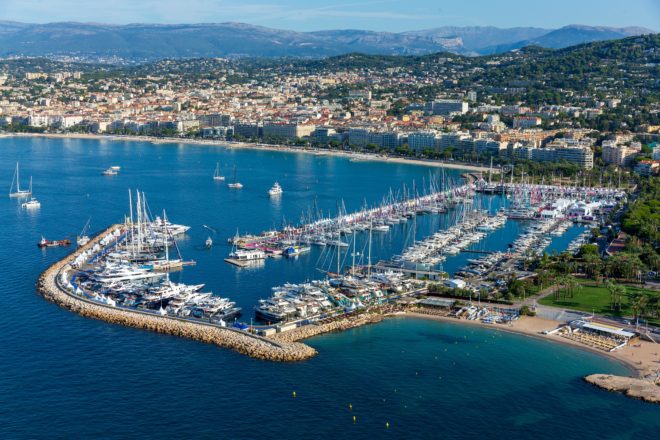 In the water, Ferretti Group displayed 26 boats including world premieres of the 48 Wallytender (see REVIEW in Yacht Style Issue 50), the Ferretti Yachts 720 and Riva’s 49ft Dolceriva, a debut only confirmed close to show time.

There was also excitement around the presence of Riva’s 90’ Argo, the Pershing’s 8X and the Custom Line 106’, which were all making their show debut, having been revealed earlier in the year.

In a press conference at the Cannes Yachting Festival, CEO Alberto Galassi and Sales Director Stefano de Vivo announced that Ferretti Group’s production value reached €358 million in the first six months of 2019, up 6.5 per cent on the first half of last year, while by June, the order backlog reached a value of €653 million, an increase of 19 per cent compared with June 2018. 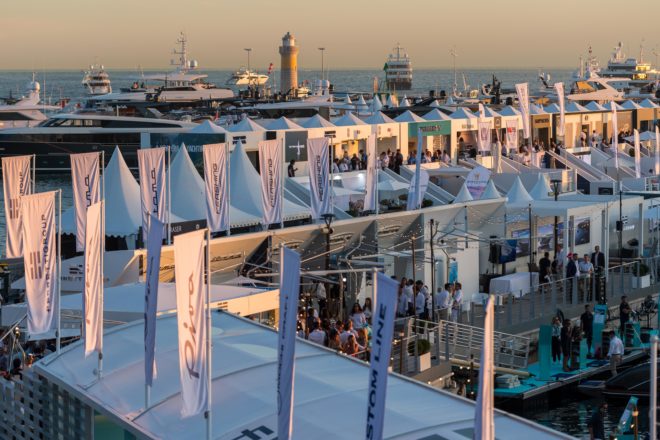 The Ferretti Group had 26 yachts on display across six brands

“At Cannes, the nautical championship is beginning and we are presenting ourselves at our best, with the exciting beauty of a fleet of 26 boats and the quiet strength of an increasingly solid financial situation,” Galassi said.

Fellow Italian builder Azimut had a strong display of 21 yachts from its Atlantis, S, Flybridge, Grande, Magellano and Verve Collections, including world premieres of the Grande S10 (see REVIEW in Yacht Style Issue 50), 78 Fly, Atlantis 45 and S8, whose participation was only announced near the start of the event. 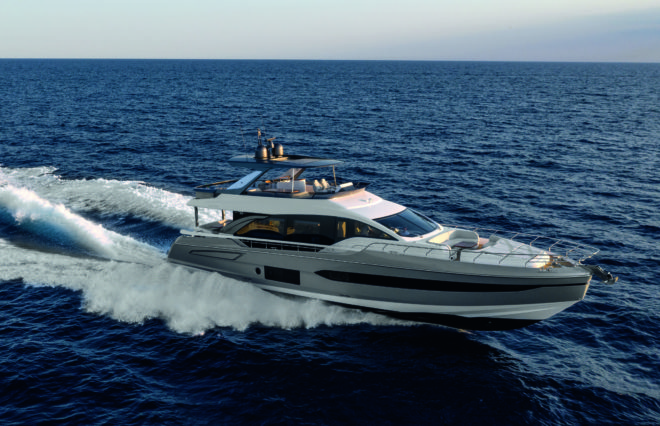 Also from Italy, Sanlorenzo and sister company Bluegame, acquired in 2018, had a strong presence and staged a press conference and dinner on the eve of the Cannes Yachting Festival at nearby Majestic Barriere to showcase their two world premieres – the Sanlorenzo SD96, with an interior by Spanish architect and designer Patricia Urquiola, and Bluegame’s BGX70.

Monte Carlo Yachts held the world premiere of the MCY 76 and the show debuts of the MCY 65 and MCY 70, with the three 2019 models among six on display, after the late withdrawal of an MCY 80 prevented the yard from showing all seven of its current range from 65-105ft. 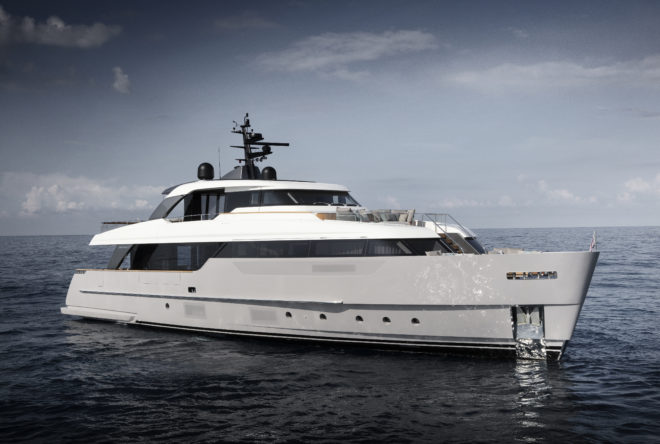 Fairline, another British brand, staged the world premieres of its flagship Squadron 68 and F//Line 33, both designed by Alberto Mancini, who was present at the press conference showcasing both boats.

French builder Prestige was also showing a relatively small boat, with its new 420 now the entry model for its Flybridge range, while other world debuts to catch the eye included the Sirena 88 by the heavyweight design combo of German Frers (exterior) and Cor D. Rover (interior).

China’s Heysea had a booth at the show and the Palm Beach GT50 Open built in Malaysia made her European debut, but Ocean Alexander led the Asian presence by displaying hull five of its Revolution series flagship 90R and a 45D, the yard’s first outboard model. 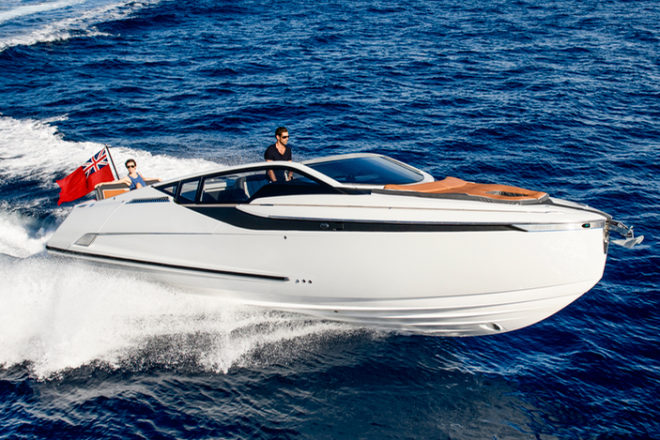 Fairline debuted its F//Line 33, its smallest model, as well as its flagship Squadron 68

CEO Johnny Chueh explained that the Taiwanese builder was actively looking to markets outside of the US in order to grow its business.

“Ocean Alexander is a global brand and one of the leading yacht manufacturers in the world,” said Chueh, son of company founder Alex Chueh. “I am extremely happy to introduce two new models that represent the new look of our company. They both have an appealing international style and many great qualities that are unique for boats of their sizes.”

In the Super Yacht Extension, Italian giant Benetti showed the Asian-owned Fast 125 Bangadang, a Mediterraneo 116 and a Delfino 95, while Pearl showed both its 95 and 80, and announced a new 65, which followed an earlier confirmation that NextWave now represents the British brand in Hong Kong. 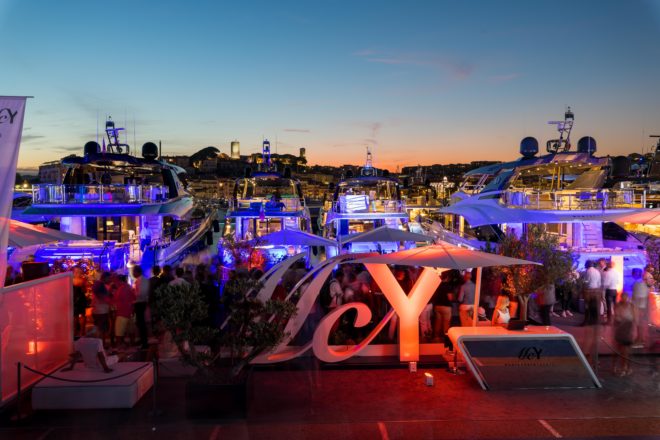 Most evenings finished with social events, especially on Friday, which had extended opening hours until 10.00pm although many parties lasted beyond that

On the other side of the port, Poland’s Sunreef staged the world debut of its spectacular 80ft power catamaran, while French builder Lagoon unveiled its first Sixty 7 powercat, alongside a Seventy8, a model unveiled at the 2017 show.

Rafa Nadal, who has ordered an 80 Sunreef Power, attended the show on the Friday and provided star dust for the shipyard’s evening event, with the opening hours extended for the show’s traditional party night.