British builder Sunseeker is staging two world premieres in September, with the Hawk 68 (see Review later in Yacht Style Issue 49) among its seven models at the Cannes Yachting Festival and the Predator 60 Evo making its debut at the Southampton International Boat Show, close to the shipyard’s home of Poole on England’s south coast. 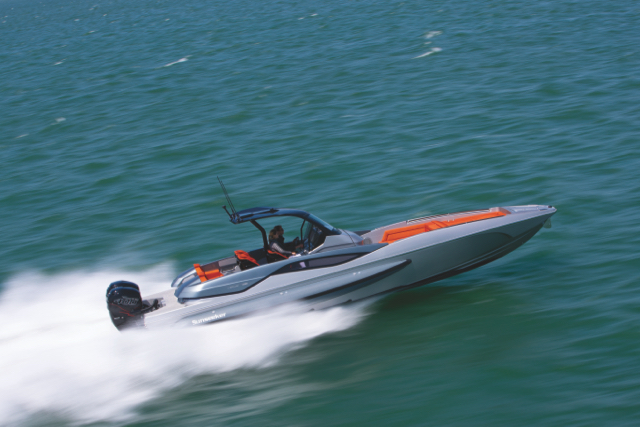 Soaring up to 62 knots with twin Mercury 400R engines, the Hawk 38 is the yard’s fastest yacht and also its smallest, while its design is unlike anything else in the Poole yard’s current range. Italian racing veteran Fabio Buzzi designed the 38ft hull, which has inflatable Hypalon 866 Stab® tubes on each side. For more details, see the Need for Speed feature or Review in this issue.

The 60 Evo joins the 50, 57 and 74 models in the Predator range, and Sunseeker has described the 18.2m model as the first of its major new product development plan.

The superstructure includes an all-new window line and powered carbon-fibre hardtop with glazed panels, both welcoming natural light. The aft area of the main deck features a large lounging area that connects to a C-shaped sofa, while the cockpit door opens conventionally but can also electrically lower into the sole of the yacht. 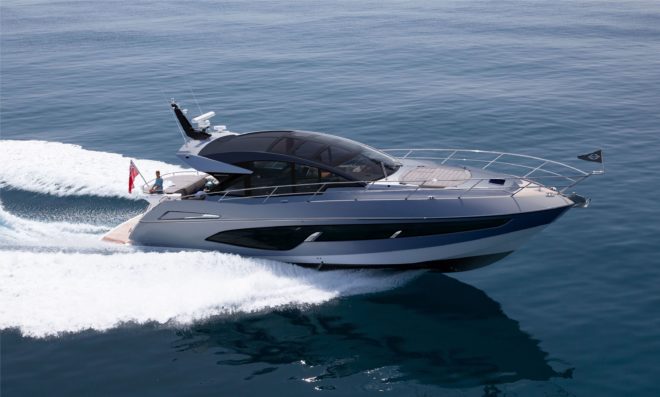 Sunseeker’s Predator 60 Evo, which shows in Southampton, is the latest addition to the Predator range from 50-74ft

The saloon has a C-shaped sofa and a twin-seat helm station, while the lower deck houses three guest cabins. Aft is a single-berth crew cabin and a tender garage that allows a Williams 325 Jet RIB to be carried and launched via the hydraulic bathing platform. The Evo 60 can reach 34 knots with Volvo Penta D13-1000 engines, although a range of engine and drive systems are available.

Princess also has three world premieres at Southampton, with the Y78, S62 and the V55, which joins the Plymouth yard’s V Class range of sports yachts from 40-78ft. The yacht, which has a top speed of 37 knots, has a sleek profile, while the main deck has been designed for those who enjoy open boating. The cockpit features a large L-shaped seating area with additional seating aft around a folding teak table, served by a wetbar with electric barbecue. 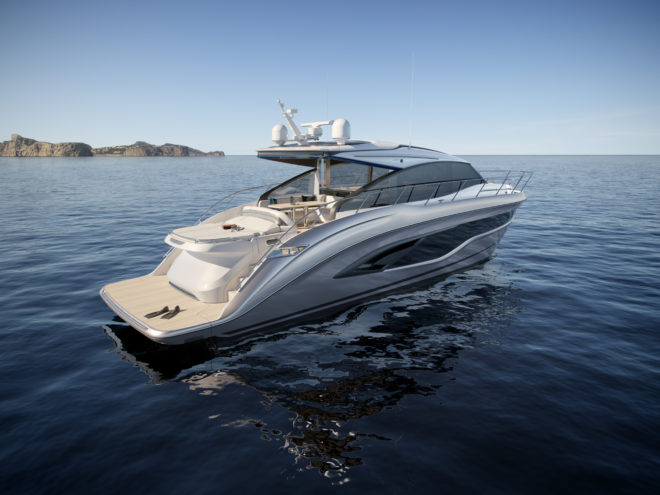 A large sunpad is located aft of the cockpit, while the foredeck also offers a seating and sunbathing area. The cockpit connects to the saloon via a drop-down sliding door and opening window aft of the starboard galley, while the saloon features a C-shaped sofa to port. The lower deck has a full-beam master midships, a forward VIP with scissor berths, and a bunk cabin to starboard, and there’s an option of a single aft cabin for crew or occasional guests.

Princess is also showing its new F50 at Southampton, although the model’s official world premiere is at Cannes, as it started three days earlier, while the builder is also showing staging the global debut of the S66.

The F50, which has a top speed of 36 knots, joins the F Class series of flybridge yachts from 43-70ft. It has a conventional cockpit that leads to an aft galley and a saloon with a C-shaped sofa and a dining table, which can also convert to a double berth. Outdoor areas include the foredeck and a flybridge that features a C-shaped sofa aft, a forward seating area that can convert to a sunbed, and twin helm seats.

Below deck is a full-beam master cabin with en-suite midships, a forward VIP with scissor berths and en-suite that doubles as the day head, and a bunk cabin.

Fairline is staging three world premieres, showing its biggest and smallest yachts – the Squadron 68 and F//Line 33 – at Cannes, and the Squadron 50 at Southampton. 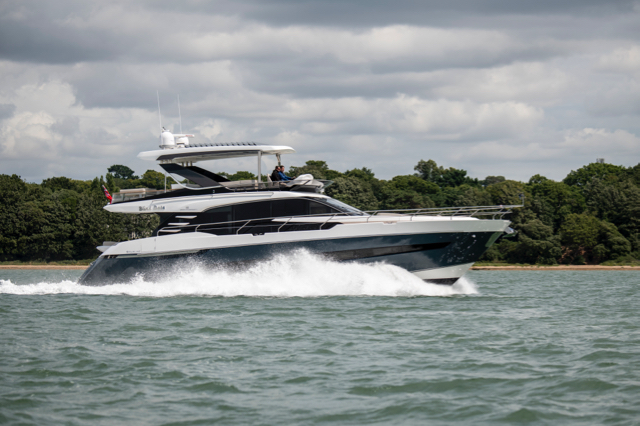 Fairline’s flagship Squadron 68, debuting at Cannes, was completed at the company’s new south-coast facility near Southampton; the second hull will head to Hong Kong

The company, which has sites in Oundle and Ipswich, has already sold at least 10 units of its Squadron 68, with one scheduled to arrive in Hong Kong by the end of the year. Replacing the 65, the new model features 12 per cent more lower-deck accommodation space, a 5 per cent larger saloon and a 10 per cent bigger flybridge.

Layout options include three or four guest cabins on the lower deck, where there are even options for the vast flybridge. There’s a twin crew cabin aft, while the swim platform is also available in different lengths.

The long-awaited F//Line 33 is Fairline’s new express cruiser and features a forward sunbed and a spacious aft seating area, which can be converted to another sunbed. (For more details, see Need for Speed feature.)

The Squadron 50 is the first of a new range of 50ft yachts that also includes the Targa 50 Open and the Targa 50 GT. The yachts build on Fairline’s established 48ft offering, with key specification and aesthetic differences handled by the Fairline Yachts Design Studio headed by Wayne Huntley.

The new exterior styling across the entire 50ft range features anthracite vinyl-wrapped hardtops and a bold choice of burnt orange, vivid red or electric blue upholstery. The 50ft range comes with a choice of twin Volvo IPS 600, 650 or 700 engine options, the latter providing a top speed in excess of 34 knots.