In blazing sunshine, Zhuang Zhouwen recently welcomed his Azimut S6 motor yacht at a lively handover ceremony at the new Argo Yacht Club in Tainan City, where he and his wife followed traditions by smashing a champagne bottle, over an aft handrail. 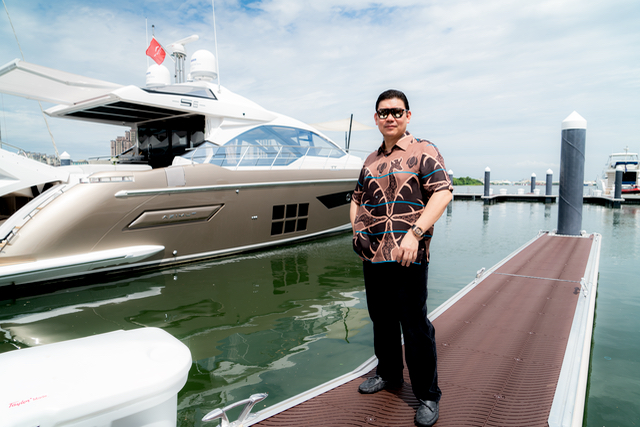 Zhuang is Chairman of Xinliwang International Holding Group, and named his new motor yacht after the company, which has expanded from being a real estate developer to a multi-national, cross-industry conglomerate.

Yet Zhuang, who also owns multiple supercars, didn’t always move in such high-flying circles, having grown up in a household of modest means in Taiwan’s southernmost county of Pingtung, which neighbours the yacht-building hub of Kaohsiung, just south of Tainan.

“I grew up in the earthiest place in Taiwan and lived a hard life during childhood,” said Zhuang, who is of Malaysian-Chinese descent, and holds both Taiwanese and Malaysian passports.

However, Zhuang held a strong ambition to rise up the corporate ladder, while retaining his strong affinity to the sea and fishing in particular.

“I learnt to swim at the age of seven and the first time I went sea fishing was on a bamboo raft. It did not have an engine so we had to rely on manpower, pushing it with bamboo poles,” he recalls. Zhuang Zhouwen is a happy man at the handover of his Azimut S6, the model’s first unit into Asia “Since I was young, I had a dream that after I succeeded in business, I would own a large farm with a huge lake and go fishing every day.”

Due to his family’s lack of finances, Zhuang had to start earning at a young age and developed an entrepreneurial spirit that has served him well.

“Because I’m the eldest son and eldest grandson in my family, I had to take on the family burden and responsibility at an early age. From the age of 10, I started to sell fish, sold meatballs at 13 and entered the buffet business at 16,” he says.

“When I was 18, I decided to persuade my mum to let me go out and enter the business world. Even though my mum was reluctant, she understood and encouraged me. I had the determination to succeed, by just working harder and harder.”

Zhuang soon rose up the corporate ladder and 15 years ago bought a fishing boat, which he transformed into a diving boat, having developed a strong interest in scuba diving. The more he used the boat, the more his passion for yachting grew. 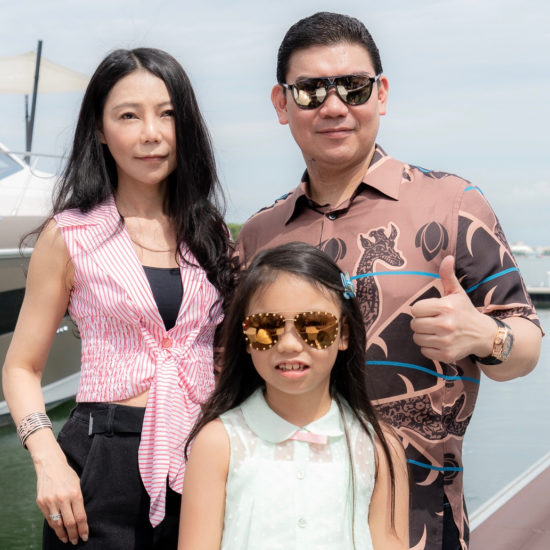 Zhuang with his wife and daughter

“I bought my first boat because I like fishing, the sea and sports. I learnt diving because it’s an attractive sport that can exercise all parts of the body, including internally, and gradually I developed my love for yachting,” says Zhuang, who also bought a sailing boat recently.

However, his latest acquisition, an Azimut S6, has put him in the rarefied world of luxury yacht owners. It followed both a growing familiarity with premium brands that he saw at various boat shows but also his interest in supercars, inspired by his son, who uploaded supercar videos on YouTube.

Zhuang now owns two Koenigsegg high-speed supercars, as the exclusive Swedish manufacturer is represented in Taiwan by the same dealer that represents Lamborghini, a brand he has a strong relationship with.

“Because of my son, I slowly started to know about supercars and realised that buying limited-edition supercars can also make money,” said Zhuang. “A really good supercar is not only for making money but also a status symbol.” 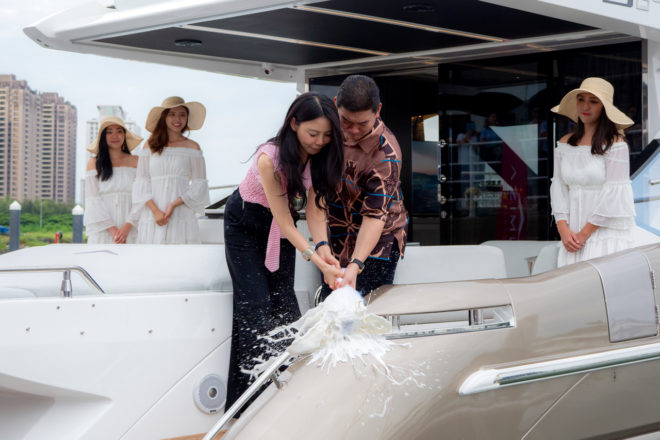 The couple smash a champagne bottle at the handover ceremony; Zhuang plans to use the boat around Tainan, Kaohsiung and the Penghu Islands

Zhuang was introduced to the sleek 59-footer by Azimut Yachts Taiwan, which is a subsidiary of Marine Italia, the Italian builder’s dealer for Taiwan, Hong Kong, Macau, southern China and Singapore.

The S6 is designed by Azimut’s long-time exterior designer Stefano Righini, while Francesco Guida handled the interior in only his second project with the shipyard. The S6 features extensive use of carbon-fibre and three Volvo Penta IPS units that can propel it to 35 knots.

“I like to buy the best products, so I wanted to buy one of the best, most expensive yachts. The Azimut Taiwan team recommended Azimut, the number one yacht brand in the world, so I decided to buy the S6,” Zhuang says.

“I chose the S6 as I like speed, and wanted a yacht that combines speed and luxury. The Azimut S6 and my supercars are both very quick and very luxurious. The S6 has the best, most luxurious interior and I’m honoured to have the first one in Asia.” Zhuang plans to use the yacht around southern Taiwan, as both Tainan and neighbouring Kaohsiung have Argo Yacht Club marinas, while there are also yachting facilities in the beautiful Penghu Islands, west of Tainan.

“When I have time, I’ll take my family to enjoy fishing, diving and watersports. Both my parents and my son love the sea, and we often go out together as a family,” he says.

“Kaohsiung, Penghu and Tainan offer very good cruising routes and there’s a diving centre in Penghu. The S6 is fast, so saves time going out and back. If I have the chance in the future, I’ll also explore other places in Asia.”