For any journalist or reviewer of yachts, it is delightful when someone thanks you for your work. For an internationally acclaimed yacht designer to do that is almost unheard of. So, we were incredibly surprised upon boarding the new Azimut Grande S10 during her world debut at the Cannes Yachting Festival when Italian maestro Alberto Mancini broke off his conversation with colleagues to personally welcome us on board. 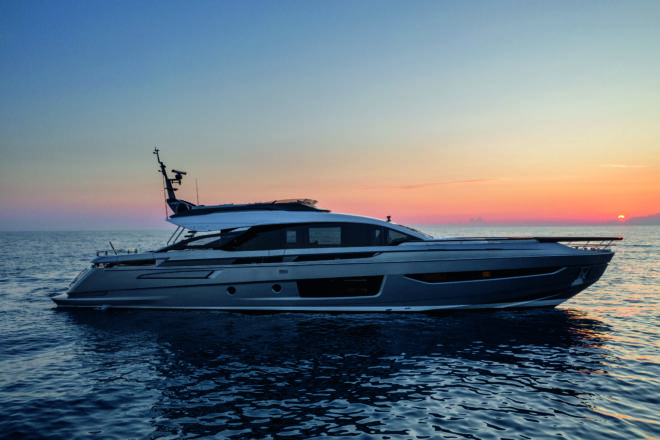 Talking with him, it turns out he was greatly taken with our review of his S8 and having liked what we wrote, wanted to thank us personally. Praise, indeed, and it gave us the perfect opportunity to ask him to guide us around the larger model.

Mancini has designed for Mangusta and also Fairline, but is now arguably best known for his work for Azimut. With the Grande S10, he is responsible for both the concept and exterior, with compatriot Francisco Guida handling the interior.

We know he enjoyed a free hand in developing new ideas, so our first question was to ask for his favourite features. He does not hesitate and reverts immediately, suggesting it’s the central stairway that runs like a backbone from the flybridge to the middle of a two-zone aft cockpit. 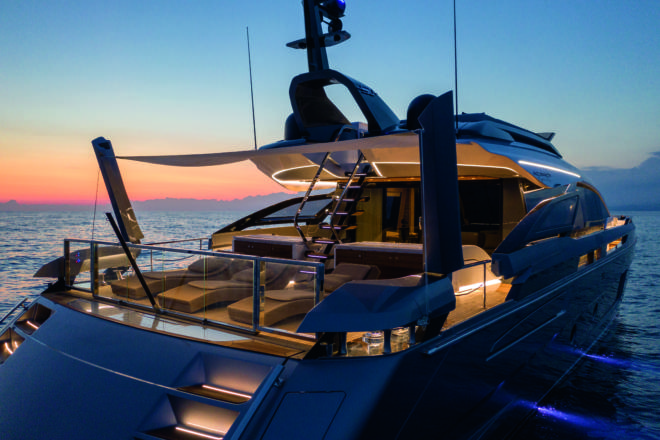 I particularly like the overall lighting, which is both functional and pleasing to the eye. LED lights pick out each step and can be switched on in different sections to create an unusual scenic effect, illuminating the boat’s different social areas.

“Those lights were a source of inspiration I found in car design. They give this boat its sporty personality and permeate the shapes and choice of materials,” Mancini says.

“I’ve always been fascinated by the car designers in Turin, who really are masters of their art. And partly because of my background in that field, I do not see car design as one that clashes with nautical aspiration.” 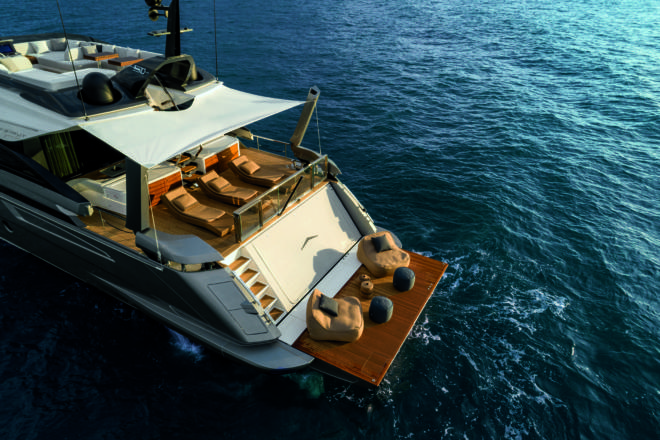 Initially used for its technical performance, carbon-fibre has now become a very visible stylistic feature in the Grande S10, where it creates a pleasing balance between sportiness and elegance.

Eclectic as ever, Mancini drew upon ideas that he believes have never featured in yachts of this kind. The first is that of a refined modern villa, with terraces leading down to the water. Here, he has created a three-deck layout that is fully open to the sea, delivering an extraordinarily large external area for a sports boat of this size.

As well as cars and terraced villas, large sailing yachts were another inspiration for the Trieste-based architect, who has created a second cockpit, forward of the aft deck, with a design reminiscent of old sailing boats. 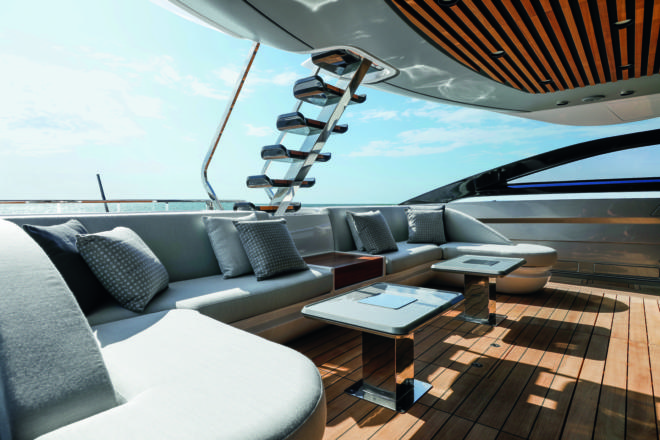 Inspired by J-Class yachts of the 1920s, Mancini has designed a private, sheltered cockpit

“I took this idea from the elegant J-Class yachts of the 1920s, where space was designed to shelter guests from the wind,” Mancini says. “The privacy zone I have created here distinguishes this boat from all the other models on the market.”

Mancini explains that the layout was built on the principle of ‘versatility and privacy, in constant contact with the sea’.

This is particularly evident on the main deck. Enhanced by a double set of doors and fully openable windows, the feeling of space can be altered to suit the mood.

Opening the sliding glass door between the private cockpit or patio and the main dining area turns these two areas into a single large social space, with the dining table a part of the interior and the two L-shaped sofas outside covered by the flybridge overhang. 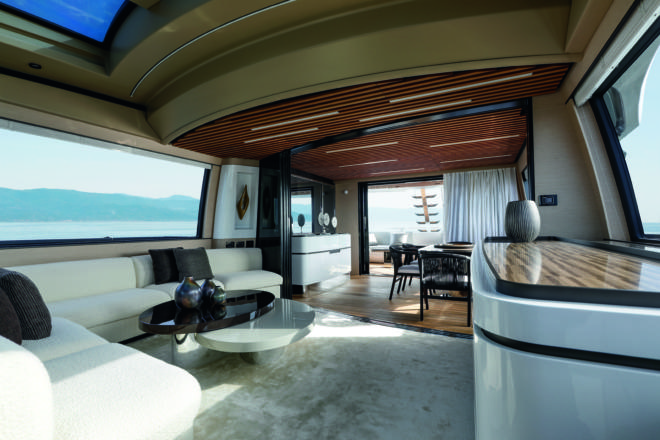 The main-deck interior features a dining area and a forward lounge area separated by curved doors, which open up to provide a large social area

This continuity is highlighted further by using the same teak and other materials in the same colour in both areas. In the middle of the saloon, a second, slightly curved, door can separate the dining area from the lounge, should the area need to be air-conditioned.

The options of closing the patio doors and opening the central one creates a large interior space with two distinct zones, yet with seating that can face each other and allow communication, opening up options on how the areas can be used day or night.

At the very aft of the main deck, the generous 17sqm cockpit has been furnished with loose furniture so as to serve as a daytime relaxation area, or even a cocktail area or dance floor in the evening, yet another example of flexibility.

The transparent parapet turns it into a terrace overlooking the sea, while the sense of spaciousness is enhanced by the large beach platform below. 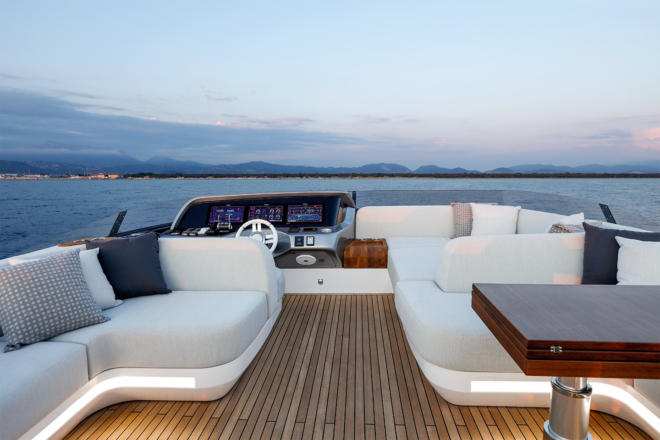 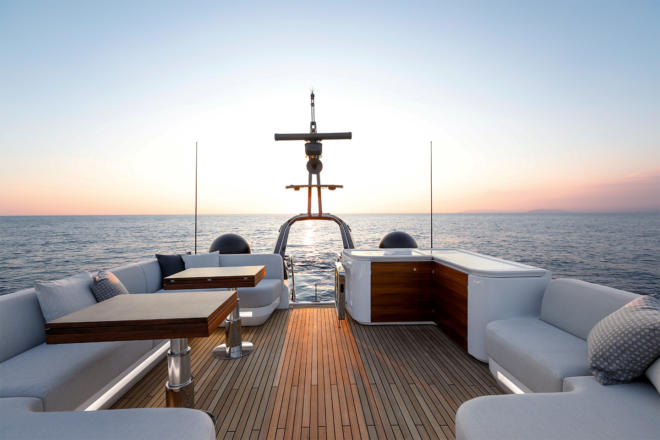 The flybridge is accessed from Mancini’s beloved carbon stairway and is entirely devoted to entertainment and relaxation. In addition to comfy sofas, guests have two tables that can be joined together to create one large table seating eight, while there’s also a wet bar and a mobile barbecue.

Guest accommodation occupies much of the lower deck and includes a full-beam owner’s suite that spans some 21sqm and features a large, imposing island bed. Guida’s décor uses the pairing of prestige woods with white lacquer, producing a light-filled effect and a sporty look.

The owner’s suite and other guest areas are characterised by very similar furnishing and colours that come together well to create continuity. Two double guest cabins and a twin each have their own private bathroom. 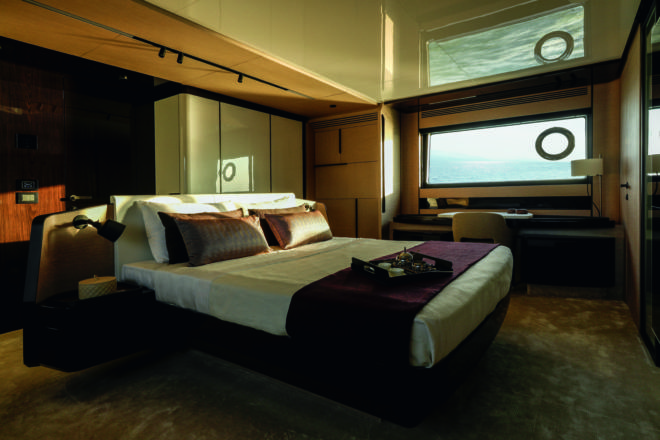 On the same deck, the galley and crew quarters are accessed by stairs leading down from the starboard side of the dining area or side deck, in line with one of this yacht’s main design criteria – privacy for the owners and guests. On this note, the serving hatch is an interesting and rather useful feature.

At the forward end of the main deckhouse, the innovative and technically advanced bridge has been designed in partnership with Simrad-Naviop whose mantra is ‘maintain simplicity, make it fun and keep it safe’.

The design features curving, reflecting forms set off by precious materials, while accent lighting conceals a complexity beneath a simple yet surprising layout. A single ultra-wide, 65-inch screen displaying all the main monitoring and navigation information can be cleverly folded away when not in use.

Another technological innovation is the electrochromic glass skylight by lsoclima Cromalite, a laminated panel that uses an electro-optical film based on Suspended Particles Device (SPD) technology. The system is activated by an electrical field that aligns the particles suspended in the film to control solar radiation. 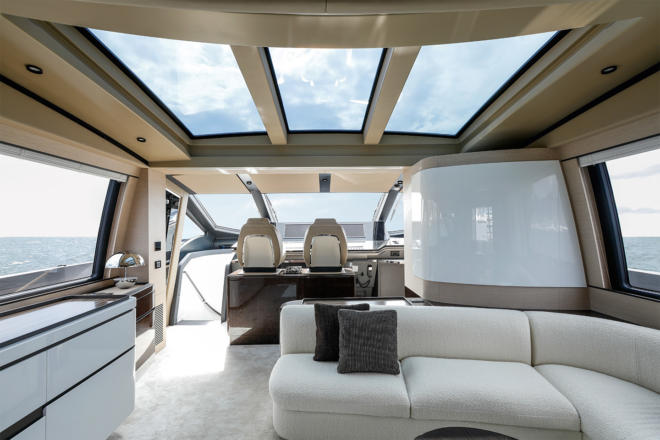 In the engine room, two 2,600hp MTU engines give the yacht  a top speed of 35 knots, which was also proven to us during  sea trials in Cannes. The engine room is fitted with an Active Ventilation System that regulates fan rotation speed on the basis of temperature.

There’s also an innovative Active Trim Control system that optimises trim and fuel consumption, and reduces hydrodynamic resistance. With the Sea Star electronic power steering (EPS), the owner is able to adjust rudder reactivity by regulating the number of turns of the wheel and effort needed on the basis of cruising speed.

All in all, this is a clever Azimut that uses the design skills of Mancini and Guida to create a yacht that is more technically advanced than any other in its line-up. It’s a very different type of animal, but nevertheless, it is wonderfully adaptable and can be trained if not tamed to give an owner a whole new experience.