Vincent Tabuteau, CEO of Asia Marine, arguably knows as much as anyone about the yachting industry in Thailand. In 1983, he arrived in Phuket as the Captain of a small sailing boat and can testify that the country’s yachting hub was a very different place back then. 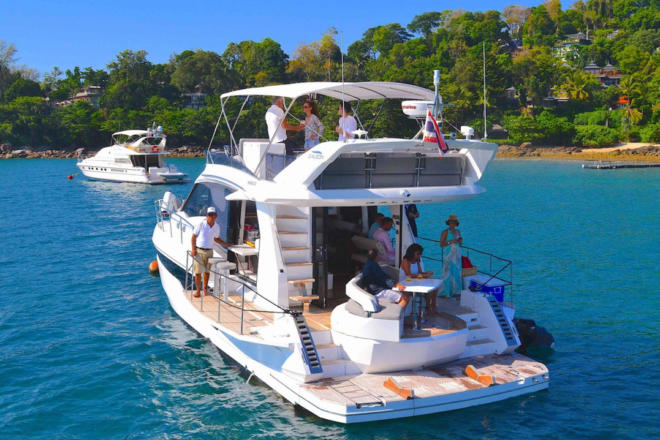 Asia Marine represents Galeon and has a 460F for charter

“At the time, there were no charter yachts,” Tabuteau recalls with a smile ahead of the first Thailand Charter Week. “Actually, there were only three hotels on the island and no decent boat to visit the Phi Phi Islands. Phang Nga Bay looked like ‘Peter Pan land’ with potential pirates.”

Fast forward 36 years and Phuket is arguably Southeast Asia’s most developed charter market and yachting destination, with Tabuteau and his company Asia Marine – which he founded in 1989 – among the companies to have led the way.

Hailing from the French sailing hub of Brittany, Tabuteau grew up on the water and has worked in the yachting industry for over four decades, the vast majority of that time in Thailand.

His enormous experience across many segments of the industry led to his current position as Vice President of the Thai Yachting Business Association (TYBA), the organising body of the inaugural Thailand Charter Week (November 16-21) at Phuket Yacht Haven. Asia Marine has a service centre at the large marina in the north of the island, although the company’s main office is in Boat Lagoon on the east coast.

Tabuteau has been a driving force behind the invitation-only six-day Thailand Charter Week, having attended the leading international charter shows in the Mediterranean and Caribbean, and been convinced that Southeast Asia deserved a similar annual event. 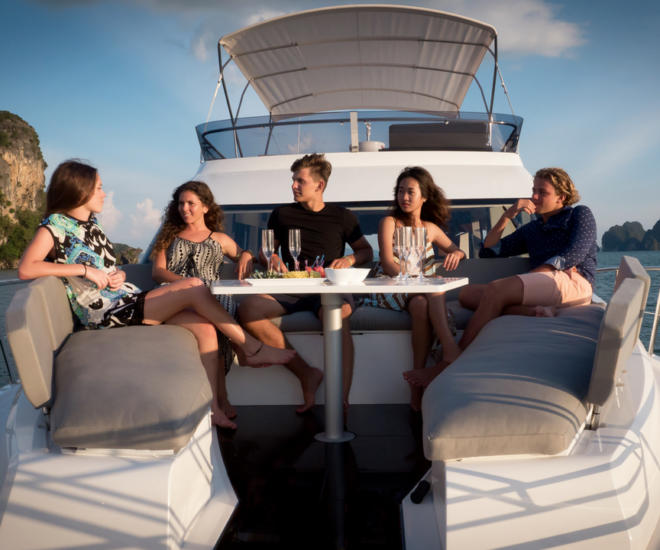 Mija, a Galeon 460F based in Phuket

“We’re aiming to showcase the beauty of chartering in Asia to overseas agents, show them the product available, but most importantly demonstrate that Phuket is a premier charter destination,” said Tabuteau.

“For owners and operators, we’re holding talks about yachting standards, on how to collectively improve the charter industry here in Phuket so that it more closely matches how Europe works. It’s a chance for all parties to learn from one another, for mutual benefit.”

Tabuteau has long been a huge supporter and promoter of the yachting industry in Phuket, Thailand and Southeast Asia in general, but having been so heavily involved for so long, he’s also acutely aware of what needs to change and develop in order for it to realise more of its potential.

“Legislation and infrastructure are the key factors that would bolster yachting in Thailand, and fortunately they are steadily improving,” says Tabuteau, who’s still a regular visitor to Europe, for both business and personal reasons. 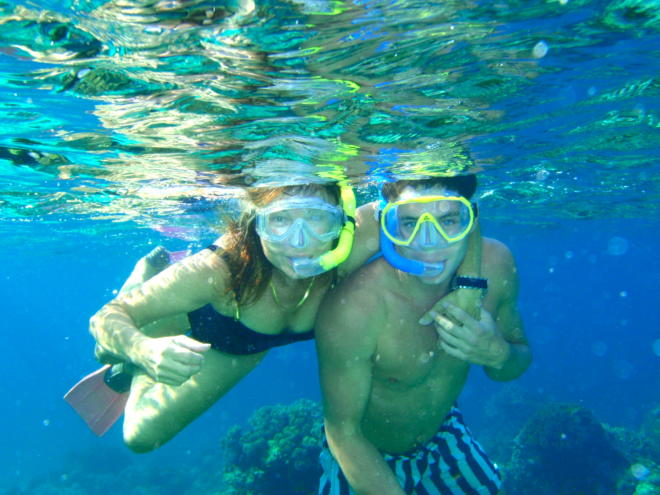 “As a founding member of TYBA, Asia Marine has been working together with other yachting industry players to endeavour to meet European standards of operations. This includes gaining support from the [Thai] Government, adapting regulations to new activity, and providing better services to protect owners’ investments, passengers and operators.

“The next challenge for Thailand and the Andaman Sea will be the protection of the environment and the quality of the tourism experience. Our yachting industry is at risk of losing its magic if no drastic efforts are made for better management of popular beaches, mass tourism in coral areas and control of plastic pollution.”

Tabuteau has seen first-hand how Phuket and its environment have changed with growing tourism and an increasing resident population – for better and for worse – having worked across a huge range of marine-related sectors during his time on the island.

As luxury tourism developed, fast modern boats were imported and a growing number of visiting yachts spent their winters in Phuket, so Tabuteau started focusing on providing yacht services. In 1987, he was also involved in the first Phuket King’s Cup Regatta and the now-defunct Pansea Regatta, then in 1989 he founded Asia Marine. 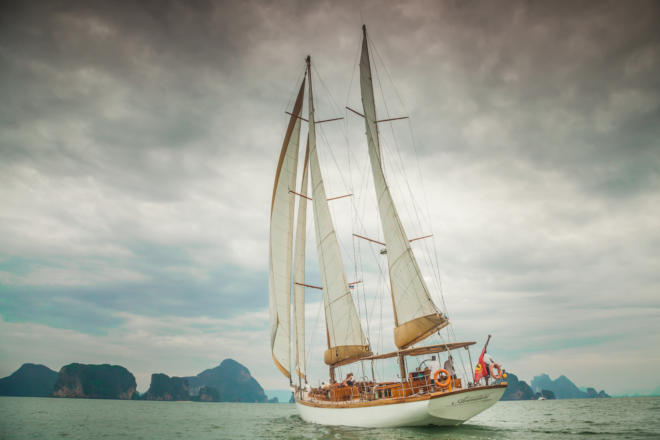 After Sunsail arrived in the early 1990s, Tabuteau ended up managing seven of the global charter company’s modern sailing boats.

“Sunsail and the phenomenal marketing campaigns of TAT (Tourism Authority of Thailand), which created ‘Amazing Thailand’, really put Phuket on the map as an international cruising destination,” he recalls.

Tabuteau says all the island’s marinas are full during the six-month high season and believes one of the key turning points was in 2004 when the Government dropped import taxes on yachts.

“Overall, the yachting industry has constantly grown in quality and size over the past 25 years. The number of yachts chartering in Phuket increases every year, while the number of superyachts based here permanently has probably tripled in the past three years,” he says. 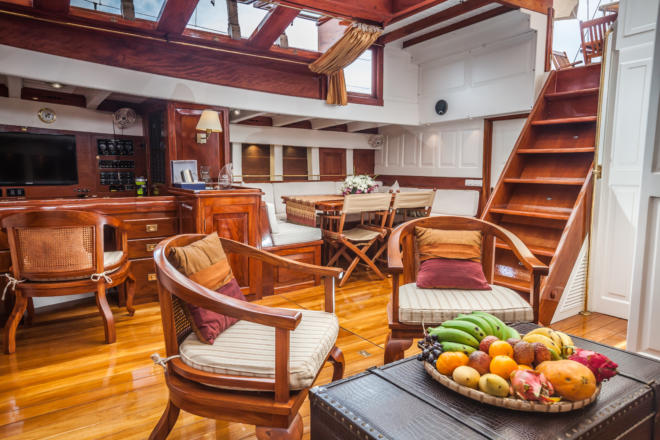 “With bigger and better boats here, there has been a need for more qualified crew and engineers, plus an increased supply of modern equipment and maintenance. Today, almost all global yacht builders, charter companies and brokerage houses have representation in Thailand, and I’d say the services for mid-range yachts is equivalent to Europe.”

One of Southeast Asia’s longest-established marine tourism companies, Asia Marine has grown in parallel with Phuket’s yachting industry and today has about 20 staff working across all of its operations.

While its main businesses remain in Phuket, the company also represents charter yachts operating all over Southeast Asia, from the Mergui Archipelago to the Anambas Islands and Komodo region.

Furthermore, since its partnership in 2017 with Eric Noyel’s Hong Kong-headquartered Asiamarine, Tabuteau and his team are part of a network that also includes offices in the Philippines, Vietnam and Indonesia.

“This gives us a larger reach to properly look after clients and represent them in Southeast Asia.” 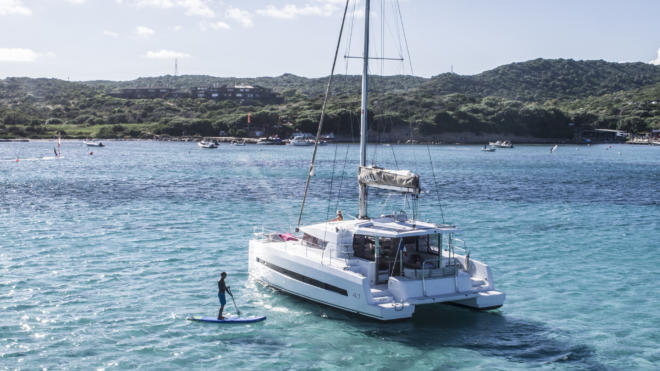 Asia Marine secured the Thailand dealership for French brand Bali in 2019 and has already sold a 4.1 sailing catamaran

Today, Tabuteau’s management team at Asia Marine in Thailand includes his wife Ratana as Director of Sales and Marketing, and Paul Stamp, who has worked as a yacht broker in Phuket for over a decade and is the company’s Operations Manager and Senior Broker.

Other key personnel include Base Manager Adam Taylor, who came from the diving industry, previously operating a dive centre in Koh Lanta, while Tabuteau’s son Ben has joined as Business Development Manager, having formerly worked at the Mandarin Oriental, Bangkok.

“Our mission is to help maintain and operate yachts for the benefit of the owners and their guests,” Tabuteau says.

“In the first 10 years of the company, we built or refit over 12 vessels, from cold-moulded wooden junks to modern composite power catamarans. Our capacity to manage all technical aspects of boat operation is at the heart of our know-how and expertise, and underlies all our other activities.” 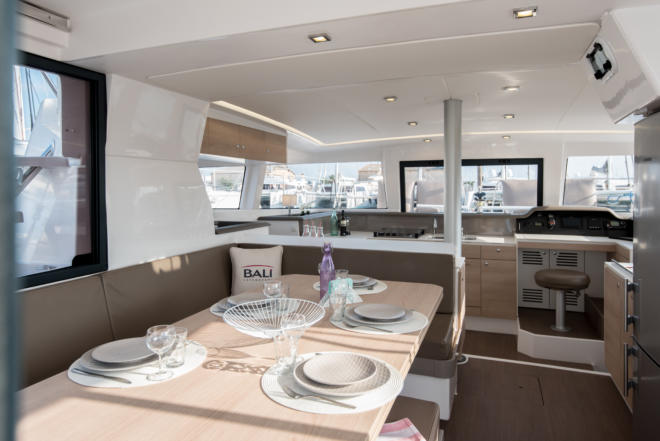 The saloon and master cabin on the Bali 4.1 sailing catamaran

Charter remains a core day-to-day business for Asia Marine, whose offerings include a fleet of sailing yachts, mainly catamarans, for bareboat charters, fast motor yachts for day charters, and crewed luxury yachts for overnight charters. For bareboat charters, most of the company’s clients are from Europe – France, Germany, UK, Russia – while Americans are another key market.

“We find that countries with a strong nautical tradition tend to want to pilot the yachts themselves,” Tabuteau says.

“Each of our types of charter yachts has its pros and cons, but together they create a wide range of choice. For day charter in Phuket, we have all nationalities, but in recent years there has been a lot of growth from the Indian, Chinese and Russian markets.”

Following the partnership with Asiamarine, Tabuteau and his team have been a dealer for global brands including Numarine (Turkey), Galeon (Poland) and Wellcraft (USA), while in 2019 the company was appointed the Thailand dealer for Bali Catamarans (France).

“Over time, we’ve found that catamarans dedicated to the charter industry are our best-sellers in term of number of boats, as they’re the best opportunity in terms of return on investment,” he says. “Our yacht buyers come from everywhere, although there’s a growing market share from Asian countries, both expats and nationals.” 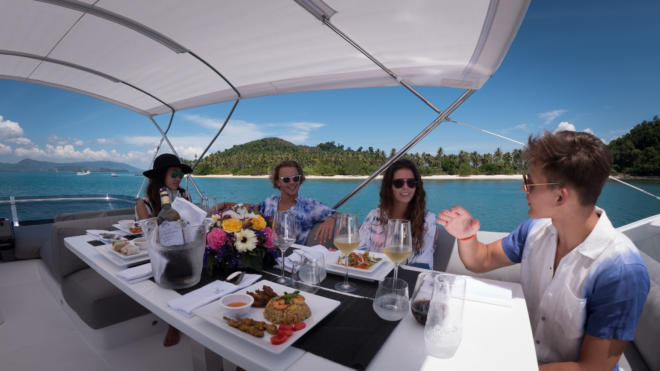 In fact, because Asia Marine has expertise in almost all sectors of owning and operating a yacht in Thailand, the company likes to manage boats for any new owners and help them to find revenue streams.

“Our forte is to offer an ‘all-inclusive solution’ to owners. We have the technical expertise to manage their assets and a marketing network to find charter revenue. Because of our experience, we have in-depth knowledge of Thailand’s regulations and administration procedures, so we can ensure the smoothest experience for our yacht owners.”

However, Asia Marine did move into a new sector of the industry in February 2018 when Noyel’s partnership with Fraser across selected territories in Asia meant Tabuteau and his experienced team were representing an international superyacht brokerage house in Thailand for the first time.

“We’ve certainly felt the need to ‘up the game’ in Thailand since the international brokerage houses expanded into Asia, and overall, it has been good that they see the potential in the region. Before we started working with Fraser, we had been involved with increasingly bigger yachts, but now we’re more involved than ever with superyachts,” he says. 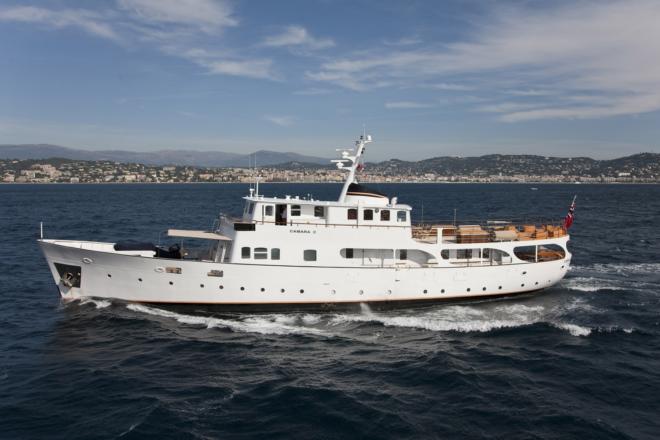 “As representatives of Fraser, we continue to ensure all yachts we represent meet the requirements for charter under the Fraser framework, which has pushed some owners to take extra measures in safety and compliance. Sales wise, catamarans are probably our most popular yachts, but selling one superyacht could drastically change the bottom line.”

It could be argued that Asia Marine has changed as much in the last three years as it did in the previous 27, due in large to the partnership with Asiamarine, the extended network across Southeast Asia, plus representation of builders like Galeon, Bali, Numarine and Wellcraft, and now one of the world’s most famous brokerage houses.

Because of that, Tabuteau is hesitant to predict how the company might develop in the coming years, but is reassured that his family play a strong role in the business, with the presence of two generations of Tabuteaus in the company painting a bright future.

“Asia Marine has really changed with the trends over three decades. We’ve gone from building wooden sailing junks to operating superyachts under the Fraser brand. It has been quite a ride,” he laughs. 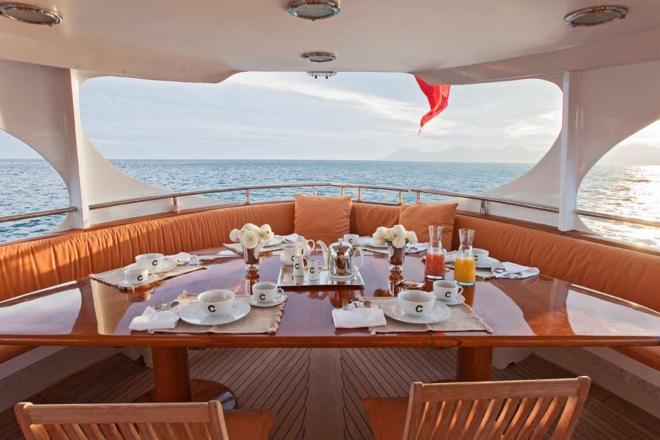 “I never envisioned where we are now, even five years ago, so who knows what will happen in the next three or five years. We’ll keep adapting and growing, but by then a younger team will probably be at the helm and I’ll be retired and fishing!”

And although he still frequently travels to Europe, whether visiting his family in Brittany each summer or meeting with business partners and agents, Tabuteau has no thoughts of returning to his motherland on a permanent basis. Phuket is still very much his home, as it has been since 1983.

“I have so many great memories since I’ve been here, both on and off the water. It’s all been an enjoyable experience the moment I arrived in Asia and I have no plans to leave. Thailand is and remains amazing.”