Awarded the nation’s Best Dining Experience in 2018 by the Singapore Tourism Awards, CURATE at Resorts World Sentosa serves up modern and innovative European style cuisine. Their ingenious artistry has since established them as Singapore’s first Michelin showcase space – allowing for quarterly collaborations with international Michelin-starred chefs. 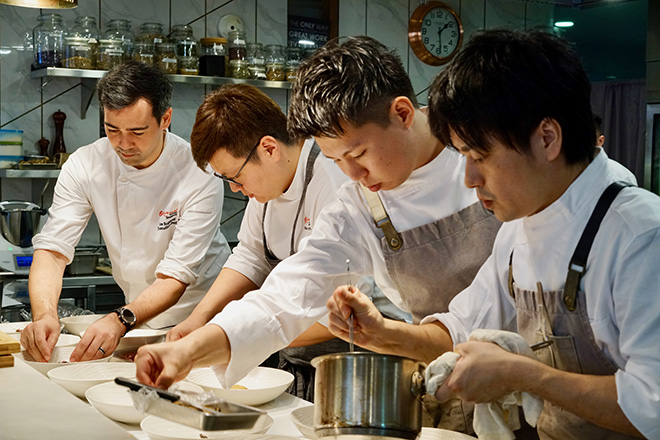 Originating from the Kagoshima prefecture, Shinya Otsuchihashi was born in January 1984. As a result of severe childhood allergies to chemical food additives, Otsuchihashi quickly developed a sincere proclivity for food. His restaurant, CRAFTALE, sits perched on the second floor in one of Nakameguro, Japan’s sleek new buildings, overlooking a forest of cherry trees lining the banks of the Meguro River. Offering both a view and menu to die for, Otsuchihashi is heavily inspired by both ends of the culinary spectrum. He is often found recreating familiar scenes through replicating seasons and reinterpreting Japanese common practice with each dish. CRAFTALE, an anagram of the French word fractale, earned its first Michelin star in 2017, two years after its initial opening in 2015.

This past Friday, I had the honor the of sampling the Art at CURATE series’ four-course lunch menu. The menu features a combination of original dishes by both CURATE’s Executive Chef Lee Sugiandi and CRAFTALE. 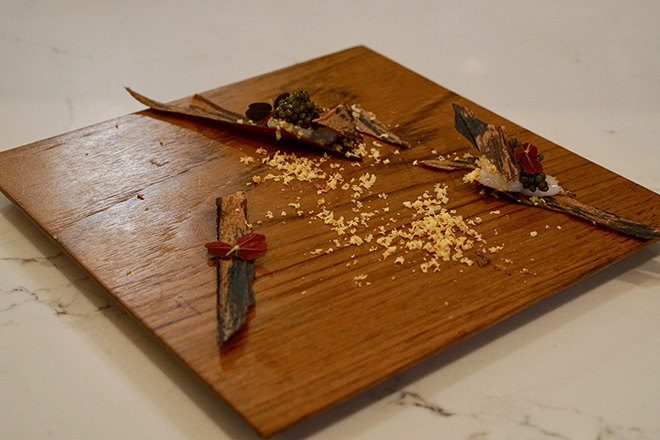 The first dish is by Chef Otsuchihashi. The Amuse Bouche is an intricate mix of scallop, walnut and caviar plated on a wooden board. At the first glance, I was confused. Garnished with flowers and sprinkles of walnut, the scallop and caviar appear to be presented on a branch. Upon asking further questions, I find that the ‘branch’ is a replica made from a blend of scallop, cacao powder, walnuts and squid ink. Using the ‘branch’ as a spoon, I am in awe of the scallop’s soft, smooth and chewy texture. Coupled with ossetra caviar – soaked in 3-7% of salted water for preservation purposes, the Amuse Bouche has an explosive flavor and is best paired with white wine. Chef Otsuchihashi serves 2017 La Petite Côte Condrieu from France. With only 36,000 bottles produced and distributed per year, the Condrieu is extremely fragrant and exclusive. 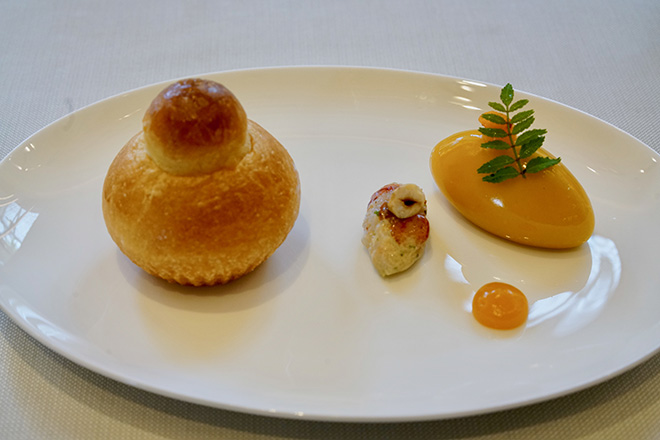 Following the incredibly mouth-watering Amuse Bouche is a dish that definitely did not disappoint. The Foie Gras Pate served with soft croissant bread and a bite-sized fusion of walnuts and lobster tartar, is a CURATE original. Mashed, dipped and mixed with seabuckthorn jelly and Sancho pepper, the Foie Gras Pate instantly melts in your mouth. Its smooth jelly texture compliments the internal creaminess. With light hints of pepper, the seabuckthorn has a pungent sour flavor. The overall dish when served with bread and the gooey yet crunchy lobster tartar is a well-balanced combination. CURATE’s Souffléted Egg with salsa verde and caviar was my favorite! Perched upon two layers, is a fluffy egg white garnished with cavier. Its green parsley puree with butter has an airy taste and extremely light texture in contrast to the lower layer of diced potatoes mixed into creamy potato puree. The potatoes are crunchy and the puree is thick with a rich flavor. 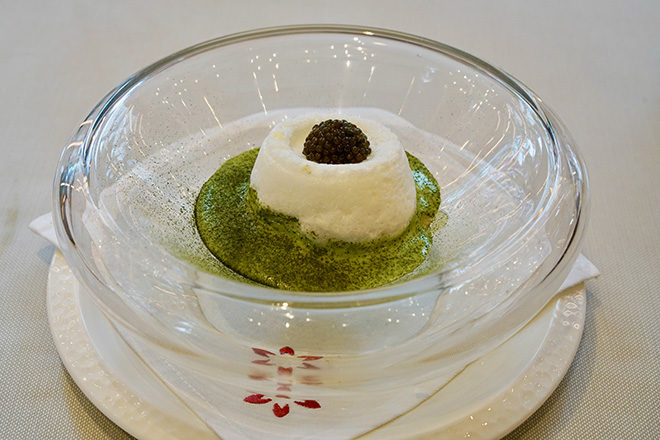 With no specific overpowering element or flavor, the slightly salty caviar offered the perfect finish to a subtly flavored dish. Ultimately, while CURATE’s Souffléted Egg is easy to digest, it’s not a dish that will suffice as a meal on its own and therefore would make a good appetizer or dessert option. 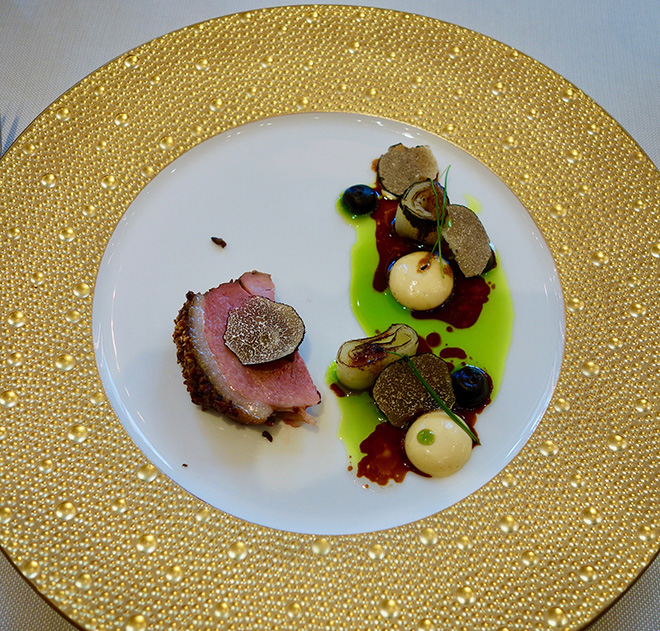 The third dish was paired with the Domaine d’Eugenie Vosne Romanee 2014, a fresh and aromatic red wine from Burgundy. Made with pepper and bellpeppers, the wine has a unique spicy aftertaste and is heavily inspired by nature.

The Kamo Nanban incorporates warm soba with duck, leek sauce and mushrooms. As a popular winter snack in Japan, the duck which is tender and juicy is lined with crunchy soba flakes. Kamo Nanban is often served at confectionary shops or at metro stations and is considered a traditional Japanese soul food. Served with a side of French leek sauce, duck juice, soy paste and cheese, the dish includes pieces of leek and truffle mushroom.

By comparison, the duck is easy to cut through while the soba flakes toughen its skin – making it harder to slice and chew. The mushrooms, sliced paper thin, were tasteless on their own but when mixed with the sauce, held a distinct and savory flavor. The Japanese Garden is the final dish on the Art at CURATE series’ four-course lunch menu. Made from key ingredients such as sesame, green tea, and black soybean – the Japanese Garden is a conceptual and innovative dish by both Chef Otsuchihashi and CURATE. In this edible replica of a real garden, the edamame, matcha, mochi, and cream cheese represent natural plantations, whereas the black soybean represents granite. 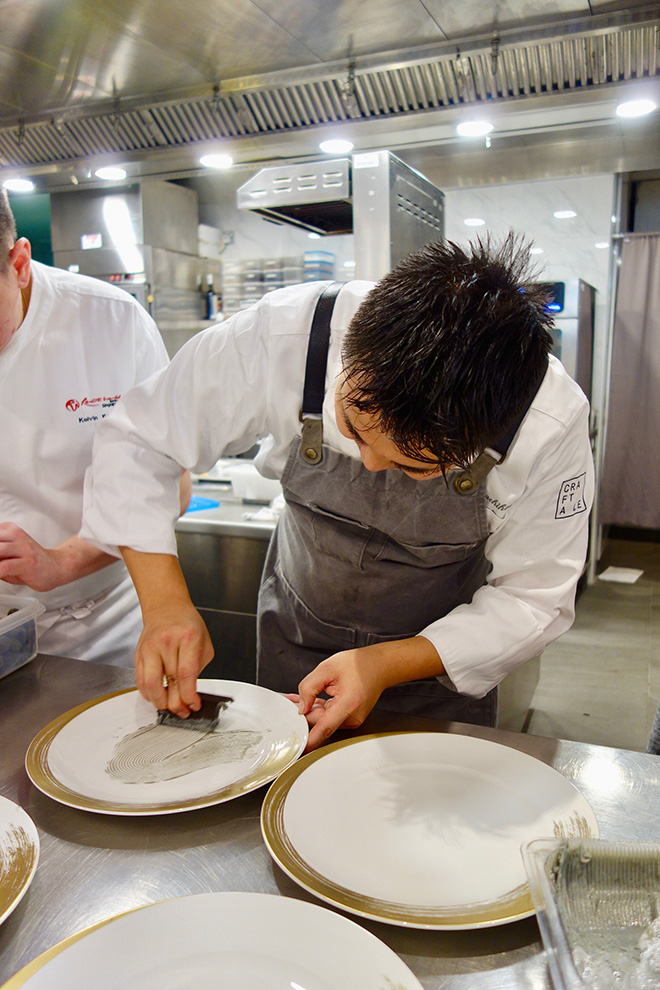 Served with cream sauce made from bamboo charcoal and pistachio, the sauce is designed to represent Arashi, which is the Japanese term for “storm”. Upon closer inspection, Chef Otsuchihashi had sprinkled drops of lemon juice over each ingredient, representing ‘a new dawn’ or ‘the morning’. Though appealing to the eye, this was the only dish I did not finish due to the overwhelming matcha flavor. 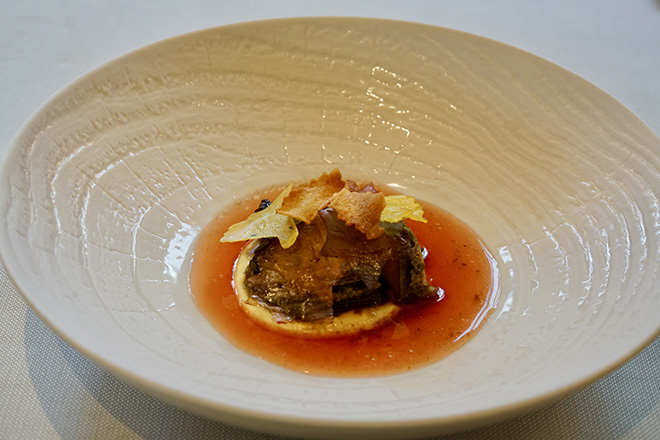 With our four-course lunch complete, we were treated to a bonus dish! The Abalone is a collaborative effort between CURATE and CRAFTALE, usually featured in the series’ 8-course dinner menu. Served dry, the sauce is poured at the table by the servers. 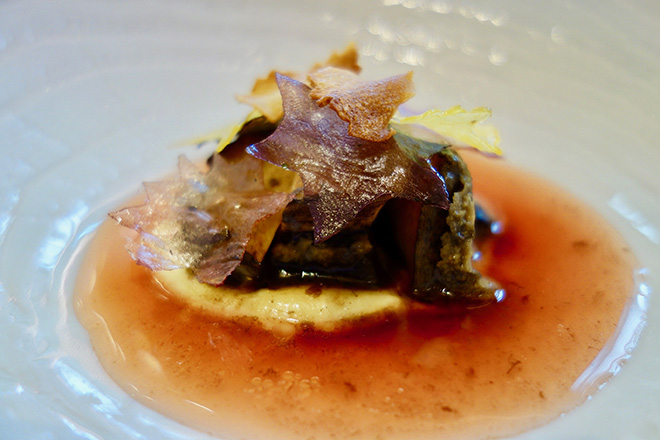 Representing the flavor of Autumn, the sauce is a chibuyum stock mixed with potato skin and bits of Japanese maple tree leaves. The abalone is slow cooked in a salamander for 4 hours before being pan-fried with butter. It sits atop creamy potato purée and butter-sautéed mushroom, and is garnished with chips from 3 different types of potato, sliced paper thin. My favorite part of this dish were the mushrooms, which were especially juicy and flavorful. The Art at CURATE series marks Chef Otsuchihashi’s first visit to Singapore. The CRAFTALE chef who was previously in Bangkok late last year, attended Osaka’s famed Tsuji Culinary Institute after completing high school and by the age of 19, had studied in France’s gastronomic centre of Lyon. During his time at CURATE (1st – 7th November 2019), guests may book the four-course lunch for S$138++ per pax and the eight-course dinner at S$308++ per pax. The Art at CURATE series also offers wine pairing services by Resorts World Sentosa’s sommelier, Takayoshi Aoki, for S$198++ per pax during lunch and S$428++ per pax for dinner.