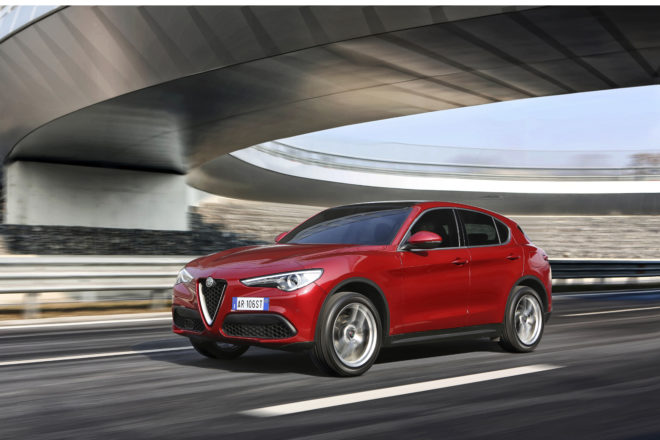 PALACE magazine is the first publication to drive the Alfa Romeo Stelvio Super out on the roads in Singapore and as I picked up the keys, I’d be lying if I said I wasn’t a little excited. Alfas always have had a certain gioia di vivere about them. As most days are here, it was a hot and clear morning, which made the Stelvio’s red paint, known as Alfa Rosso, really glisten in the sun. There’s something about Italian cars painted in red that gets your heart racing and I knew from that moment that I was in for a very special day. Design
The exterior styling is both unique to the Alfa Romeo Stelvio and similar to others in the line-up, with that all familiar upside-down triangle grille dominating the front end across all current Alfas. Some may not prefer the front-end styling, but I for one find it rather tasteful. Walk around the vehicle and its side profile transitions from sleek to aggressive, while its rear curvature is raised and bulky enough to meet SUV purchaser’s expectations.

The interior finishing is posh and polished. The steering wheel is sporty and features the stop/start button along with two Ferrari-esque paddle-shifters which are linked to the 8-speed automatic gearbox. A mixed analogue and digital display keep your most important information front and centre and I particularly appreciate the racing-style “kph dial” with the zero right at the six o’clock mark. The seating position is right where you expect it to be and although I found the brake pedal to be a quirky design, however, the set-up did not inhibit my driving style one bit. 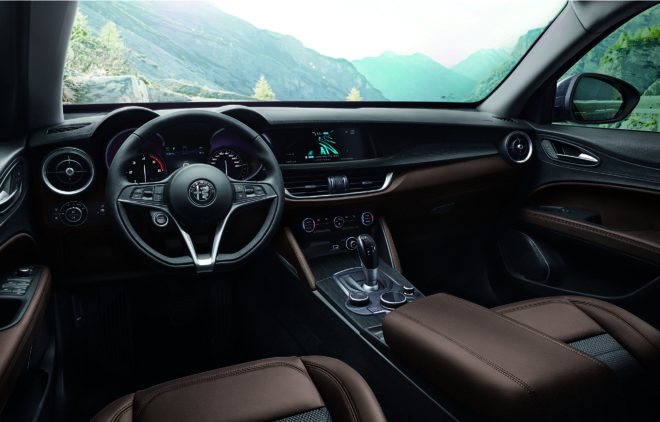 The engaging and tactile interior styling

The cabin’s fit and finish make it a beautiful place to be in; perfect for long road trips. There is plenty of space both in the front and rear as well as lots of useful caddies and USB ports. The boot is also rather large and has lots of hooks and covers to store items securely. The rear seats can be lowered to extend the space further, which is perfect for storing large items.

On the Road
Driving the Alfa Romeo Stelvio is a bit like having two totally different SUVs in one with its personality being interchangeable depending on the driving mode selected. Using Alfa’s “DNA” selector on the centre console, the driver can switch between Dynamic, Natural, and Advanced Efficiency modes which affect the throttle response, transmission, and steering weighting. I found driving in Natural and Advanced Efficiency modes through the city were fairly similar although Natural was a little more responsive. It wasn’t until I put the vehicle in Dynamic mode that things really started to get interesting, with the gear changes and throttle response really sharpening, more feel emitting through the steering wheel, and the surprisingly responsive 2.0-litre engine providing plenty of acceleration through the Q4 all-wheel-drive system. With 200 horses on tap, it may not have the grunt of the Quadrifoglio, but the Alfa Romeo Stelvio Super has more than enough power to get you to your destination in a way that only an Alfa can. 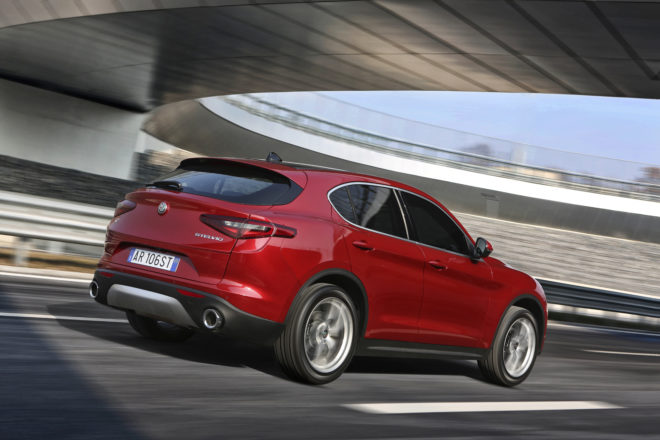 Even the rear of the Stelvio’s styling turns heads

Verdict
The Alfa Romeo Stelvio remains very strongly linked to the Alfa Romeo heritage yet without many of the drawbacks that have plagued the brand in the past. A true option for anyone in the market for a new luxury sports SUV. No longer an alternative for eccentric individuals, you can now buy an Alfa with your head and your heart. Read about other luxurious Alfa Romeo models here.