While the Lange 1 is widely regarded as the brand’s signature timepiece, the original Tourbillon Pour le Mérite is without doubt A. Lange & Söhne’s most historically significant and arguably most desirable watch. Technically speaking, though modern wristwatches have mechanical movements which far exceed the chronometric precision of traditional calibres, the tourbillon and all its complexity entails, still renders this complication an exclusive luxury. In short, it’s usually an allegorical motif for value.

Hence in 2000, when the complication finally made its debut in the Saxony manufacture’s most recognisable timepiece, the Lange 1 Tourbillon was a celebrated union between the horological attractiveness of the tourbillon and the aesthetic asymmetry evocative of Lange – namely the outsize date, a three-day movement and a power-reserve indicator. Available in 25 piece limited edition, the Lange 1 Tourbillon “25th Anniversary” serves as the climax for a series of 10 references celebrating 25 years of A. Lange & Söhne. The 38.5-millimetre white- gold case sets the stage for a solid-silver, argenté- coloured dial that contrasts with the blued steel hands, meanwhile the reverse sapphire caseback ably showcases the decorative blue engraving complete with rendition of the iconic outsize date with “25” signifying its special quarter-centennial. 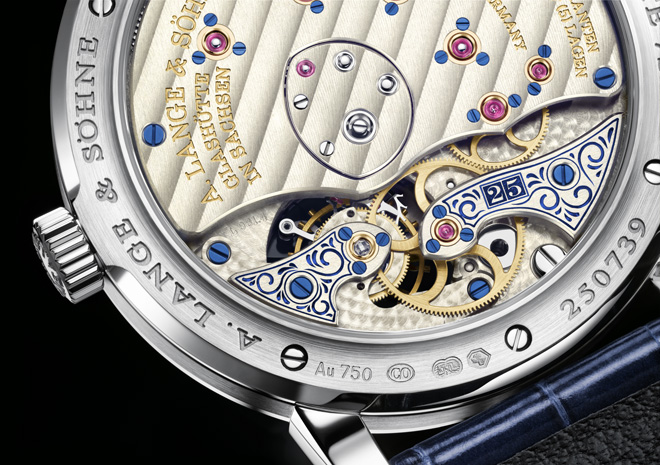 The Lange 1 Tourbillon “25th Anniversary” joins other special editions in the family, among them, the “165 Years – Homage to F.A. Lange” anniversary collection of 2010 where the Lange 1 Touribllon was one of the first three watches of the manufactory with a case in honey gold, a material used exclusively by the maison. Later in 2014, the Lange 1 introduced a fourth model in the Handwerskunst series in a limited edition of 20 platinum timepieces with a gorgeous black enamel dial. Suspended between two diamond endstones, much like on 1994’s acclaimed Tourbillon Pour le Mérite, the one-minute tourbillon of the Lange 1 Tourbillon “25th Anniversary” features a stop-seconds mechanism, a patented system pioneered by Lange which allowed the balance inside the rotating tourbillon cage to be stopped instantaneously – in essence, giving a Tourbillon complication a “hacking feature” – allowing the seconds hand to stop – that was heretofore unseen in a tourbillon wristwatch. The innovative mechanism is clearly visible in a generous aperture in the dial and through the glass units disc of the outsize date.