Imagine sitting next to Richard Branson on a Virgin Atlantic flight. Watching a private screening of Cool Hand Luke with Paul Newman. Singing a duet with Aretha Franklin or sparring with Muhammad Ali. Only this was yachting’s version: I was taking turns at the wheel of the 48 Wallytender with Luca Bassani. And it was real. 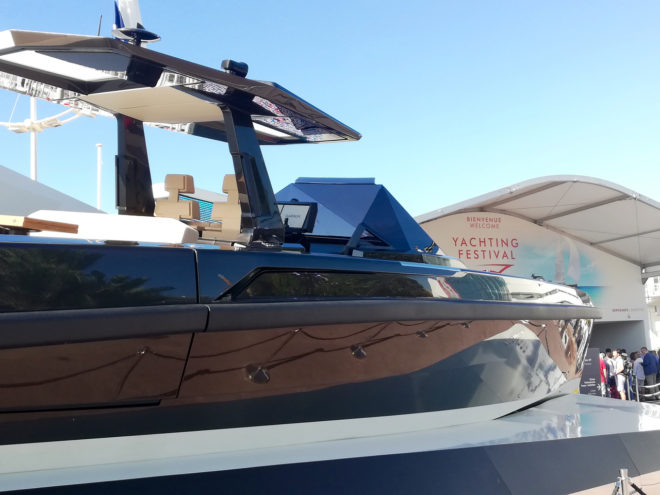 The 48 Wallytender had its world premiere at the Cannes Yachting Festival, with one model in the water and one by the main entrance (pictured)

The man who founded Wally in 1994 and turned the brand into a yachting and design icon has always been a hands-on kind of guy. And now here he was in the Bay of Cannes, steering sea trials on the new Wallytender, the first new production model from Wally since it was bought by Ferretti Group, an acquisition only completed in April.

Playfully nicknamed ‘the volcano’ by Ferretti Group CEO Alberto Galassi and COO Stefano De Vivo, Bassani is proud of and even surprised by his latest creation, which had its world premiere at the 2019 Cannes Yachting Festival.

“The boat actually performs slightly better than I expected,” he says before we set off. “We start at 11.5 tonnes for an empty boat, and a very light boat will be able to go 38 knots.

“I think we’re about 14 tonnes today with all the options and people, so we’ll probably go 36. But the old Wally 47 was only doing 32-33 knots, so even being heavier, this is slightly faster.” The first model unveiled by Wally since the iconic brand became a part of Ferretti Group, the 48 Wallytender made its US debut at the Fort Lauderdale International Boat Show

We actually have 10 people on board the 47ft 7in boat and once we gradually push the twin 480hp Volvo IPS650 engines to their max, the speedometer flicks between 36 and 37 knots as the 48 Wallytender powers and leaps through 3-4ft waves.

However, it’s not the top speed that’s most remarkable about the performance of the yacht. The fact that consumption changes little in the higher tier of speeds is another winning feature.

The most notable feature, though, is its remarkable stability once auto-trim is activated. Suddenly, the bow drops and the yacht glides as smoothly as a supercar and corners like it’s on rails, admittedly at the expense of a few knots. It’s a remarkable feat of engineering and one that Bassani sees as essential.

“We have two modes. At top speed in flat sea, you keep the bow high. As soon as you have waves and want it more stable with no slamming, we put down the interceptors and the bow drops, so we’re using the very, very high deadrise to cut through the waves,” said Bassani, who says the bow deadrise is ‘practically 90 degrees’. 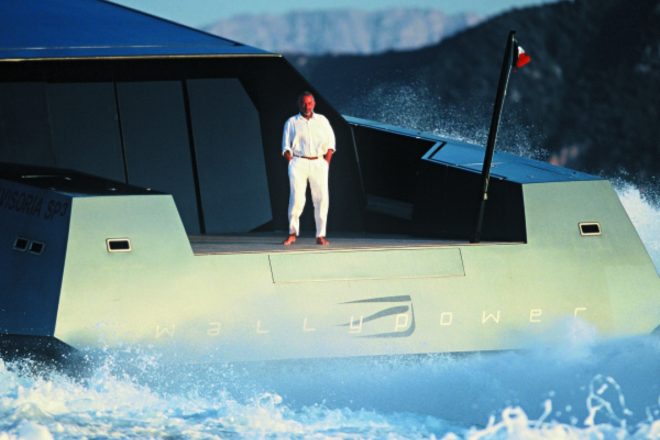 Luca Bassani personifying cool onboard the one-off 118 Wallypower, launched in 2002

“This was the characteristic of our hulls from the beginning, and why we started with the vertical bow, not the usual. The comfort in such conditions is so much higher than with a normal bow. It’s very important for the customers – and the wives of the customers – to have a smooth ride and soft landings.”

“The original Wally Tender started as a chase boat for the brand’s sailing yachts, to bring sails and so on. I then began to use it as the chase boat of my big [118] Wallypower, then all the other big boats looked at me and said, ‘I have a 60m motor yacht with only a 7m chase boat, yet his boat is much smaller and he’s got a 14m chase boat’.

“Everybody then wanted to have a bigger chase boat,” he laughs, “so I would say that was the start of this new market. At the beginning, we had big success with the Wally Tender and the 47. We built something like 130 units between the two.” 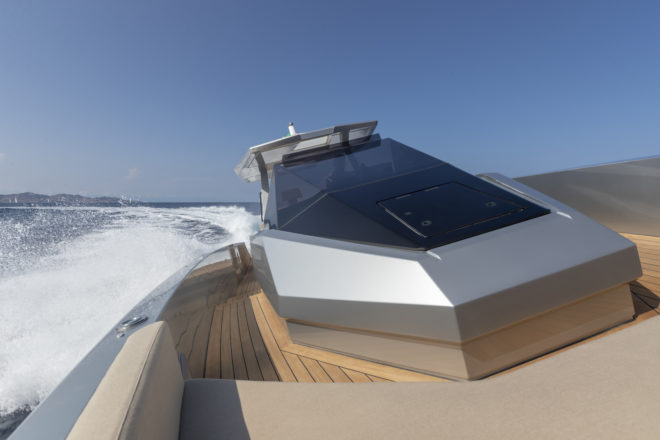 The 48 Wallytender can reach 38 knots in calm conditions

Bassani, who has been based in Monaco since he founded Wally, says that today’s market demanded a “more refined” version of the classic design, including a spacious cabin so guests can stay overnight in comfort.

“The origin of the Wallytender was quite sporty, and the furniture and everything was fairly basic. Today, we realised that the market is asking for a boat that’s more comfortable, with a galley, air-conditioning and so on,” he says, also mentioning a Seakeeper, a product that wasn’t around at the time of the first models.

“The aim of the 48 Wallytender was to make a more cruising version of the original, so it could be used for a day or a weekend.”

The yacht’s stunning lines and clever combination of angles and curves is pure Wally, pure Bassani, while other features include a single-level, non-slip teak deck and reassuringly deep bulwarks, designs that increase safety on board and eases the worries of parents. 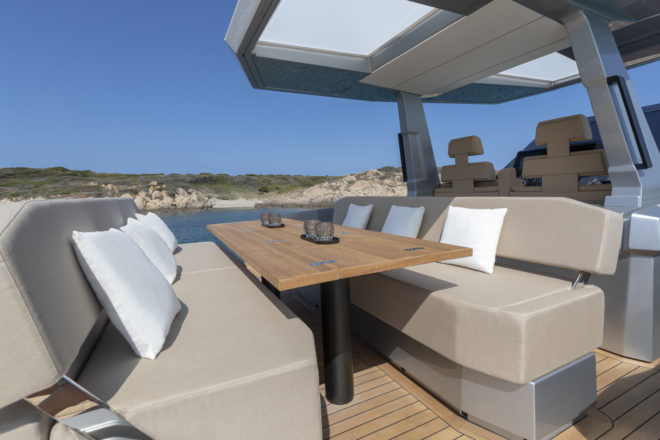 Situated aft of the helm station and the outdoor galley, the social heart of the boat is the dining table and two sofas, which feature adjustable backrests

At the heart of the 48 Wallytender are two bench seats and a table, sheltered by a hardtop that also covers the galley and helm station. Each bench fits up to four people and when the boat is underway, the forward bench backrest can be flipped so you can have up to eight people facing forward.

Forward of the dining area is the wide, outdoor galley, which has a range of options and is ideal for barbecues and al fresco dining.

In front of the galley is the helm station, which has two double benchseats that can flip up if people wish to stand, often the case at high speeds, and is protected forward by a dark, angular windscreen.

The steering wheel sits below two Garmin screens, while the Volvo Penta IPS controls include a joystick for easy docking. On this note, the boat features the classic Wallytender wraparound fender, an elegant yet practical feature that rids the need for storing, moving and tying multiple fenders each time. 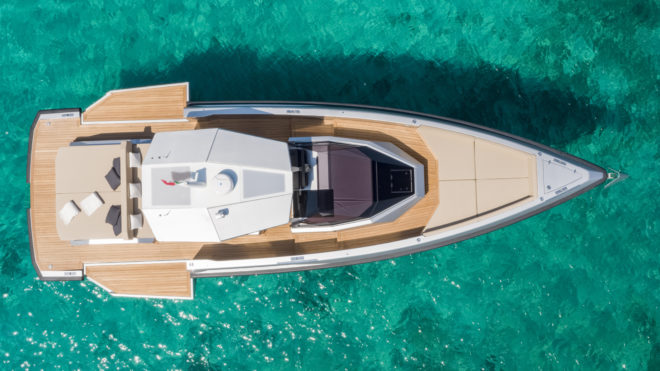 The drop-down bulwarks aft create important extra floor space and access to the water, and link well with the large double sunpad

SIDE DECKS, SUNPADS AND SEABOBS

After arriving at its destination, the 48 Wallytender starts its second life and it’s time to relax, with the Seakeeper 6 offering stabilisation when required. The aft end of the boat is dominated by large sunpads, which can be raised to access the storage area below, ideal for housing small water toys like waterskis, wakeboards, Seabobs and so on.

Another party trick is the fold-down bulwark sections aft, which hugely increases access to the water and the overall size of the swim platform. Although seen most prominently in recent years on Galeon yachts, Bassani first used the drop-down sides on the 118 Wallypower, although in a more central location.

“It’s a new feature, which is also a fashion – you see it all around now,” he says before pointing to the aft sunpads.

“But it’s a feature you need on a boat like this with this kind of box, which is a garage for the toys and also a cover for the engines. For example, on our 52 Wallypower, which is wider and doesn’t have this ‘box’, you probably don’t need it.” 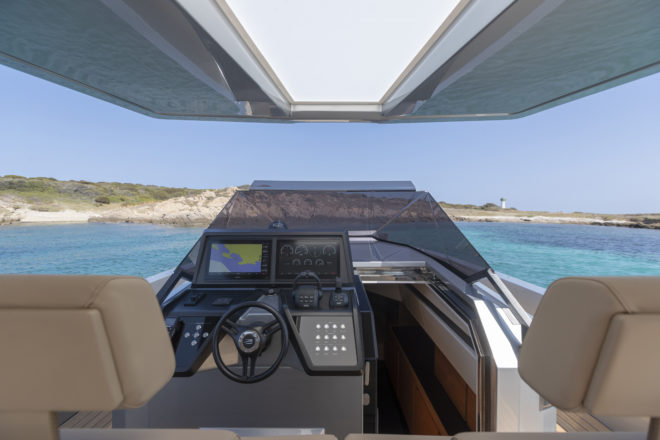 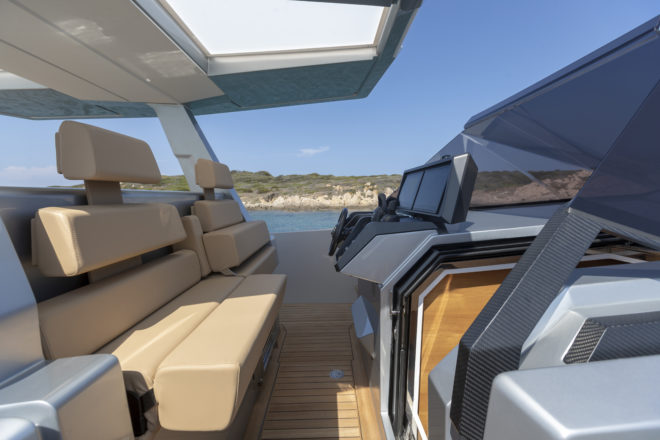 Another key feature at this end of the 48 Wallytender is the retractable passerelle that doubles as a swim ladder, and is part of the standard package.

There’s further lounging and sunbathing area in the foredeck, where there’s another large sunpad also covering storage space underneath. The bow itself contains a technologically advanced anchoring system hidden within a flush-fitting hatch, which opens up at the touch of a button in the helm station, and deploys or retracts the anchor.

Beside the helm station are the stairs to the cabin, which benefits from natural light through a deck hatch. The attractive carbon-fibre steps are made from a single mould, as is the cabin floor, in what is a surprisingly spacious room.

There’s good headroom until the foot of the large, aft-facing bed, although you can sit up comfortably once you’re in or on the bed, making it pleasant to read, check your phone or work on a laptop. 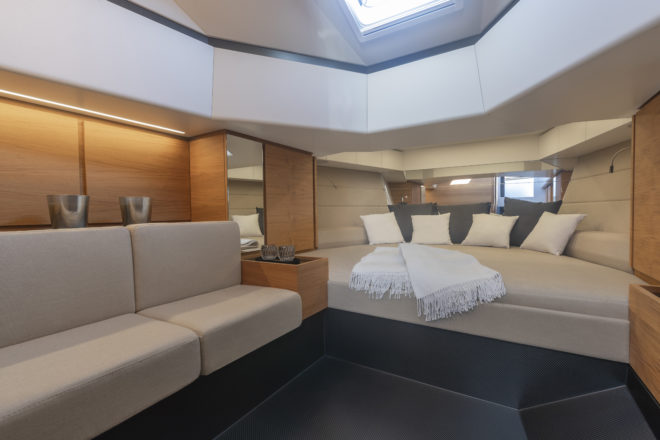 The full-height cabin is surprisingly spacious, with a bench seat to port

The room includes a bench seat to port and plenty of storage, while the en-suite bathroom to port has a sink and vanity area that’s separated by glass doors from the shower and head, which can be covered to become a bench seat.

Bassani admits that one of his design challenges was to raise the freeboard without losing the purity of the hull lines, and it’s remarkable that such a sleek-looking boat can have a full-height cabin and an en-suite bathroom with a stand-up shower.

In October, after the 48 Wallytender also showed at the Monaco Yacht Show, Ferretti Group announced seven sales of the model as part of the company’s €465 million of new orders for the first nine months of the year, 18 per cent higher than the same period in 2018.

De Vivo, who is Managing Director of Wally as well as CCO of Ferretti Group, said: “These sales confirm the vision of Ferretti Group in acquiring one of the world’s most renowned and innovative yacht brands. In terms of research and development, engineering and production, Ferretti Group is in a position to develop Wally’s unique potential even further.” The tie-up was first announced at Boot Dusseldorf in January, when Ferretti Group made it clear that the Monaco-based Italian would be free to pursue the design ideas that have shaken up the yachting world for 25 years. It has been a honeymoon period so far and Bassani admits he enjoys being part of one of the world’s largest yachting conglomerates.

“Let me say frankly that I am very happy. The [Ferretti Group] management at any level is very young, very motivated. They love to be with Wally now and do something different, because it gives them a lot of motivation. They already loved what they were doing, but this is a new challenge,” Bassani says.

“At any level, not only myself with the top management, we’re having very good relations because there’s such a strong motivation, so we’re very happy.”

And the ideas just keep coming. Ferretti Group has announced designs for a 165 Wallypower designed in conjunction with Espen Oeino, plus a Wally 101 sloop, with exterior styling developed in collaboration with Pininfarina and naval architecture by Judel / Vrolijk. 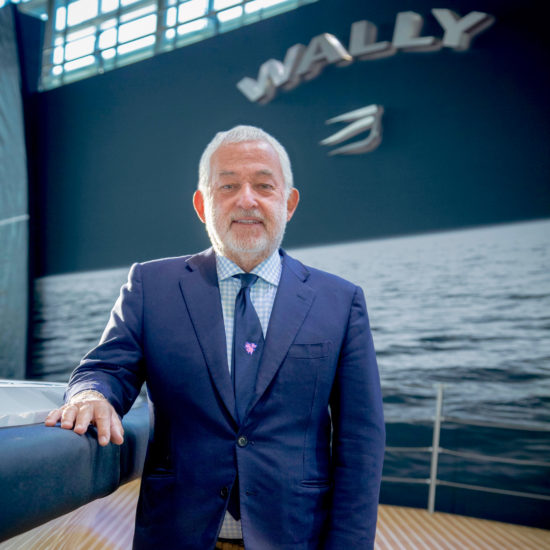 Luca Bassani founded Wally in 1994 and now his brand has the support of the Ferretti Group, one of yachting’s biggest conglomerates

“Wally finally has what it didn’t and couldn’t have – big, organised production facilities, big commercial and marketing support, and big finance, to invest in the new models,” Bassani admits.

“For me, innovation is not simply doing something different; it only exists if it creates a better product. You’ll see in the next two or three years, we’re going to present a huge number of new models with the Wally DNA, always with innovation and the motivation to offer a better product.

“This move has also challenged me personally, but I’m happier than before. Finally, I have all the strength to push the brand to a different level. Today, we have this possibility. It’s the realisation of my dream.”